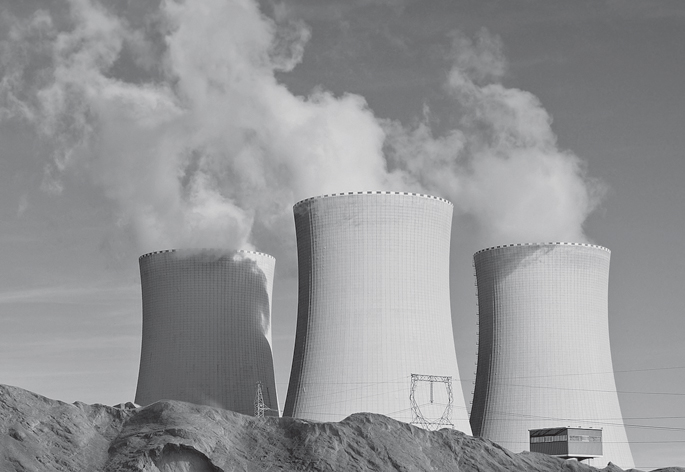 Andhra Pradesh, a major constituent of the southern grid, was one of the pioneer states to undertake power sector reforms in the country, which it began as early as in 1998. Andhra Pradesh Power Generation Corporation Limited (APGENCO) came into existence in 1999, following the unbundling of the erstwhile Andhra Pradesh State Electricity Board into six entities to focus on the core operations of power generation, transmission and distribution.

The genco has come a long way since the state’s bifurcation in 2014, and has played a key role in making the state power surplus. At the time, the state was grappling with a power deficit of 22.4 MUs per day; however, now Andhra Pradesh has transformed itself into a power-surplus state through consistent capacity addition in the conventional and renewable energy segments contributed by APGENCO. The company’s installed base has increased to more than 5.2 GW, of which 600 MW was added in March 2018, with the commissioning of a thermal power project. The genco is now gearing up to add another 3 GW to its portfolio by 2021-22.

Installed capacity and performance so far

The total thermal capacity is largely accounted for by two flagship plants including the 1,760 MW Dr Narla Tata Rao thermal power station (stages I-IV) and the 1,650 MW Rayalaseema thermal power plant (RTPP) (Stages 1-IV). The utility commissioned the fourth stage of 600 MW capacity at RTPP located in Kadapa district in March 2018. State-owned equipment supplier Bharat Heavy Electricals Limited supplied the equipment for the project. Apart from these thermal power projects, the company has another project in its portfolio, the 1,600 MW Sri Damodaram Sanjeevaiah thermal power station. The plant is owned by Andhra Pradesh Power Development Company Limited, a joint venture (JV) of APGENCO and IL&FS Limited, with both the companies having a 50 per cent equity stake in the JV.

The genco has 11 hydropower projects in the state. The most recently commissioned hydropower plant is the 50 MW Nagarjunasagar tail pond dam hydroelectric project, which was added by the company in January 2017. The company’s entire solar capacity comes from a 5.42 MW solar photovoltaic power plant, which was commissioned in 2016-17 in West Godavari district.

In terms of operational performance, APGENCO has been experiencing a declining plant load factor (PLF), reflecting the country-wide trend in the power sector. However, the decline has not been as steep for the utility. The PLF decreased from 78.01 per cent in 2013-14 to 71.59 per cent in 2017-18. However, the specific coal consumption required by its thermal power plants has remained the same over the past four years.

Going forward, APGENCO’s will focus on both conventional and non-conventional energy sources. The utility plans to add an aggregate capacity of 3,070 MW by 2022, in order to meet the expected increase in demand. Of this, 52 per cent will be coal based, 31 per cent will be accounted for by hydropower and the remaining will be renewable energy based. 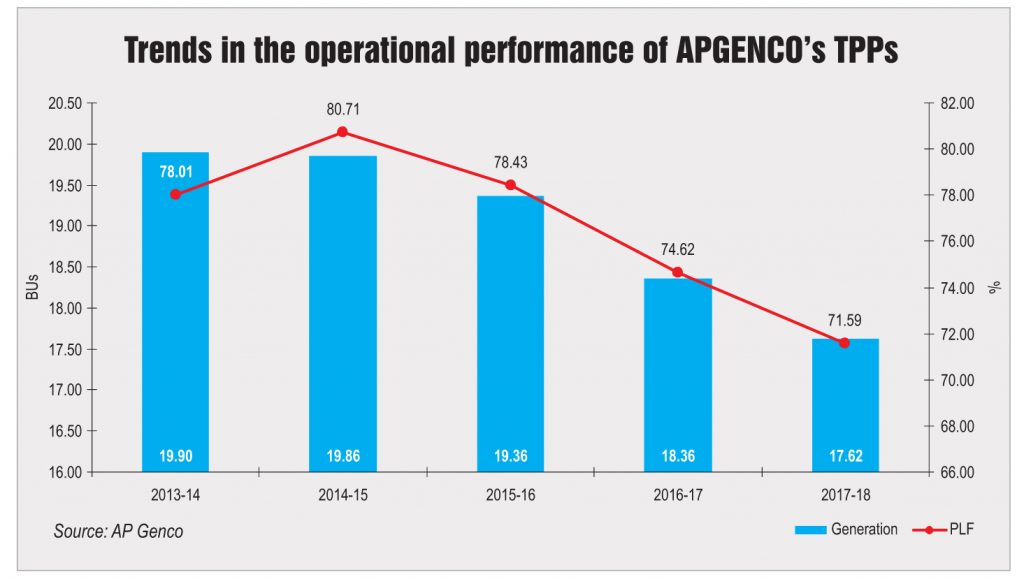 Around 2 GW of this capacity is expected to be online by June 2019, which includes two key thermal power plants, namely the 800 MW Dr NTTPS Stage V and the 800 MW Krishnapatnam Stage II projects. Given that coal will be the mainstay for meeting the energy requirements, at least in the short to medium-term, the utility is undertaking efforts to ensure continued coal supply for the same. To this end, APGENCO has estimated its future coal requirements to be 163.7 million tonnes for the period 2018-23. Of this, the requirement for domestic coal has been estimated to be 153.12 million tonnes, while the remaining demand will be met by imported coal. Further, the Ministry of Coal has allocated the Sarapal-Nuapara coal block to APGENCO to address any shortfall in demand for its own consumption.

In the hydro segment, the genco plans to add a significant 960 MW of capacity with the commissioning of 12 units of 80 MW each at the Polavaram hydro plant by 2022. The project, which has an estimated cost of Rs 53.38 billion, will be set up with a loan assistance of around Rs 39.65 billion from REC Limited and will increase the hydel generation in Andhra Pradesh from the existing 2,336 MUs (2016-17) to around 4,600 MUs by 2022. The project has been sanctioned techno-economic clearance.

APGENCO has been facing similar challenges as other utilities in the sector. One of these is maintaining sufficient coal blocks at all thermal units and ensuring coal quality. To deal with the issue of low levels of coal stocks, APGENCO has been regularly monitoring rake movement and stocks in coordination with the railways and coal suppliers. Moreover, the utility has dedicated personnel for monitoring coal logistics at the loading end. It has also introduced third-party sampling at both the loading and unloading ends to ensure the quality of coal supplied. 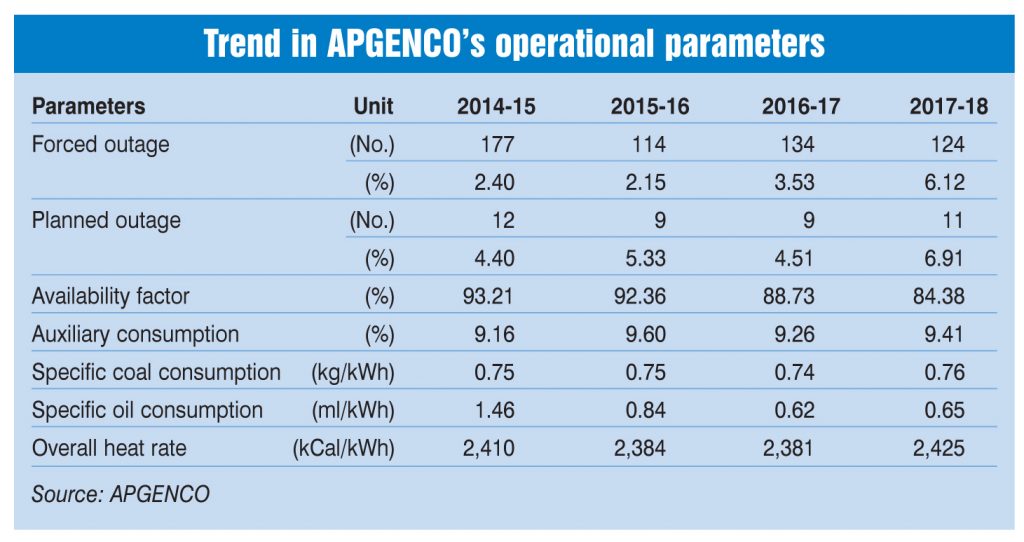 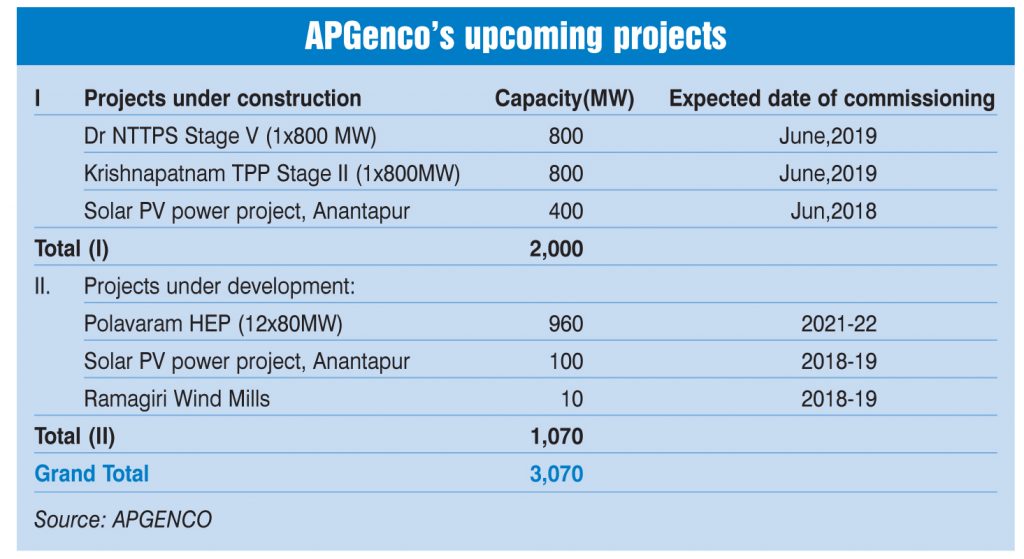 On the operational front, a key challenge is that its thermal stations need to face continuous ramp up and ramp down to facilitate the injection of non-conventional energy into the grid. To enable flexible operations, APGENCO is planning to undertake performance studies to identify the units with higher efficiency, which would be operated during low loads.

Further, the utility undertakes periodic overhauls and preventive maintenance of equipment in order to reduce operations and maintenance costs and increase the operational efficiency of its plants. APGENCO is also planning renovation and modernisation (R&M) works at its power plants on a case-to-case basis, considering the age of the plant, phasing out of plants, etc. It has taken up feasibility studies for meeting the new environmental norms. Once the feasibility studies are complete, APGENCO will take a decision on the implementation of emission control processes such as flue-gas desulphurisation.

To ensure the timely completion of projects, APGENCO has been conducting review meetings and site visits with all stakeholders on a regular basis to ascertain the progress in construction and resolve key issues.

APGENCO is expected to continue to play a key role in maintaining the state’s self-sufficiency in power, given its firm capacity addition plans, coal import efforts, planned R&M activities and focus on the timely completion of projects.