It has been nearly a decade since the power sector shifted to the market-driven competitive bidding regime in 2011, with the objective of achieving economical tariffs through a rational and transparent bidding framework. A recent analysis undertaken by the Forum of Regulators (FoR), however, shows that the bids for competitively bid projects have significantly gone up of late owing to a host of risk factors facing the developers. These risks pertain to the off-take of power, fluctuation in fuel availability and quality, and delay in project commissioning. The FoR has also pointed out that while it appears that the tariffs under Cases-II projects are lower than its counterparts, there are concerns regarding the pass through of uncontrollable factors, which is currently sub-judice. 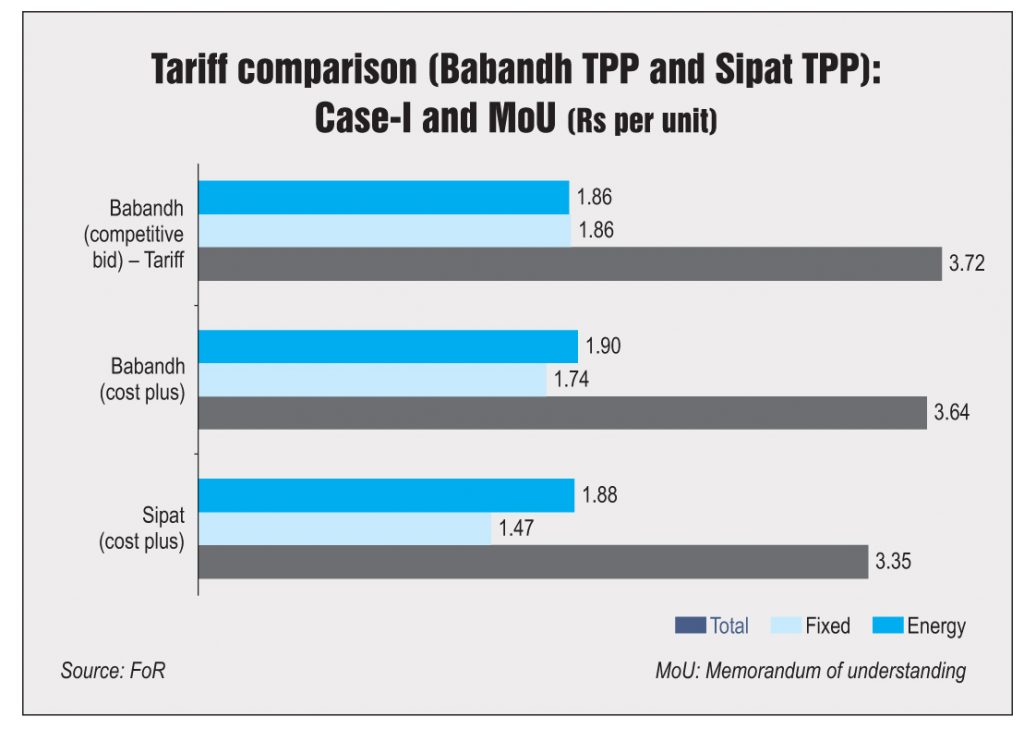 plus). It is difficult to compare any two projects even under the same tariff-determination category, especially for Case-I projects as they involve too many variables in decision-making (source of fuel, location of plant, technology, prevailing market condition impacting interest, operating cost, etc.), limited information is available regarding the strategy followed by the successful bidder, and the uncontrollable risk factors are difficult to quantify, among other things. 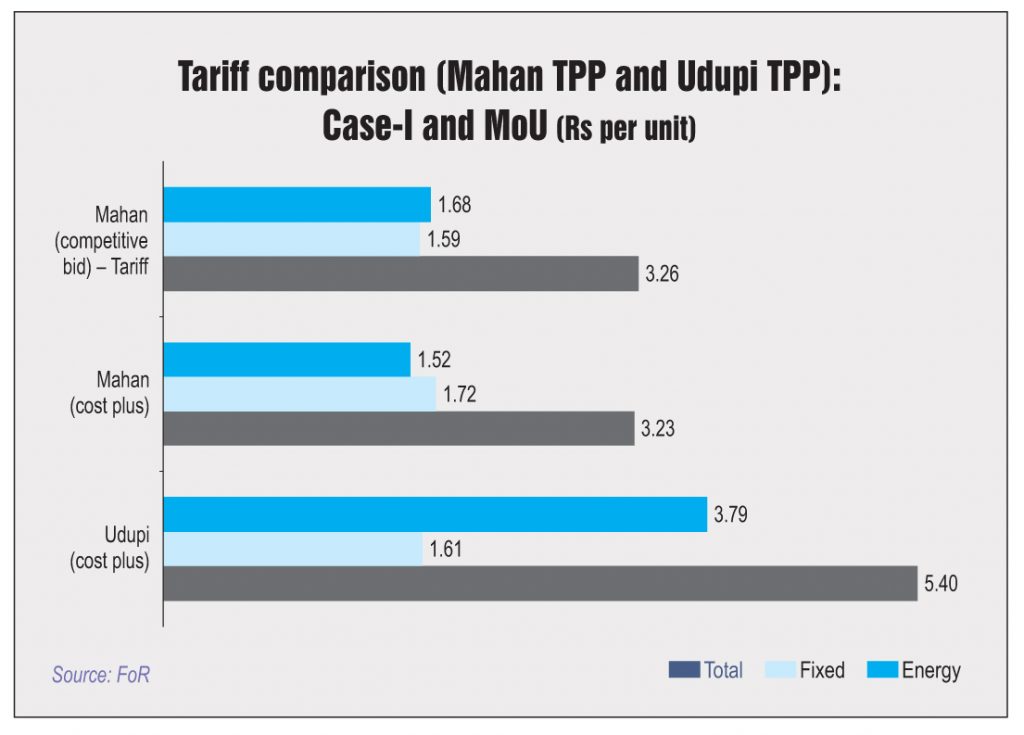 considering a higher risk premium. Up to 2009-10, the levellised tariff for most of the bids was under Rs 3 per kWh (fixed+variable). Meanwhile, in 2012, there was a steep increase and the bids reached about Rs 5 per kWh. This could be largely attributed to the identified risk factors and inclusion of a higher risk premium. This is also being reflected by a number of compensatory tariff petitions pending at the regulatory commissions. One of the key risks facing the Case–I project developers pertains to fuel availability. Under Case-I projects, the developers are required to arrange fuel and also bear the entire risk associated with fuel availability. Although the technical qualification for bidding for Case-I projects requires the bidder to have linkages for the entire capacity, the actual coal supply is often not adequate, which results in lower capacity utilisations. In order to tackle coal shortages, developers procure coal either through e-auctions or blend it with imported coal, which substantially increases the cost of generation. Other way, the developer might chose to operate the plant at a lower plant load factor (PLF), which results in higher per unit fixed cost and lower efficiency. For a 5 per cent reduction in the operating PLF from the normative levels, the returns for developers may reduce by 1-3 per cent, depending on project specifications and operating parameters. Further, the uncontracted capacity under competitively bid projects faces a higher risk of poor power off-take. Around 29,000 MW of commissioned generation capacity is lying uncontracted and the electricity from these projects is being sold on a merchant basis.

The report suggests that tariffs for Case–II projects under competitive bidding may either be comparable to or lower than that of projects under the cost-plus approach. Based on the comparison of three sample Case–II projects with cost-plus projects, the report notes that prima facie the tariff for former projects is lower than that of the latter. However, since some matters pertaining to the tariff of Case-II projects are still sub-judice, a fair comparison could only be made based on the outcomes of these issues. 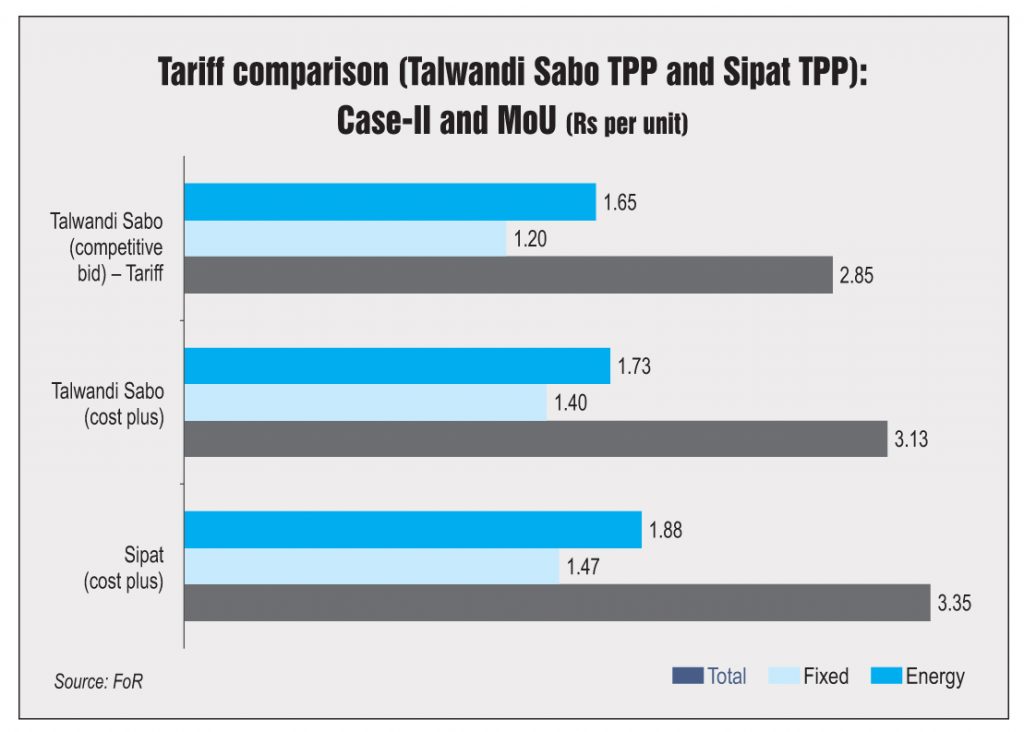 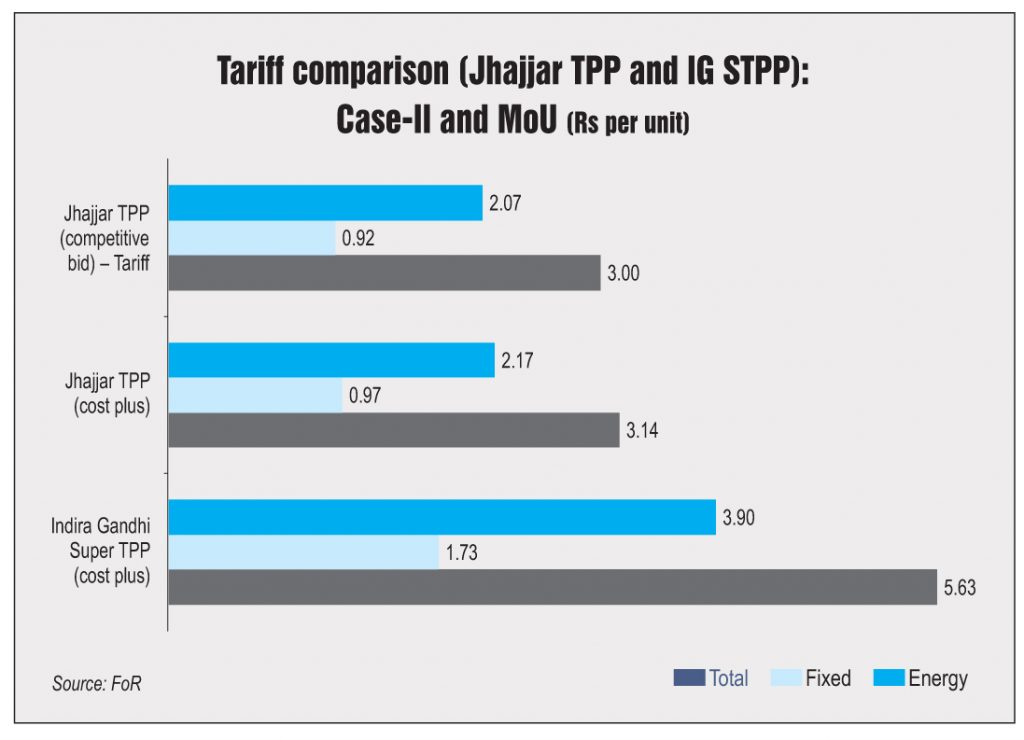 The report notes that the viability of a project acquired through competitive bidding depends on a host of risk factors such as delay in project commissioning, quality of the equipment procured, availability of quality and sufficient fuel, adequacy and availability of a transmission corridor for power evacuation, off-take by buyers and the financial health of discoms along with market movement and changes in the policy environment. Besides, the extent to which the risk parameters are factored into the quoted tariff is difficult to assess. The expected returns from competitively bid projects at original capital costs vary from the expected minimum return of around 14 per cent (used for comparison). This only captures the impact of change in capital cost (due to equipment pricing or delays impacting the interest during construction). Further, given the contract term of 25 years, the bid planning also considers the external macro-economic scenario. In sum, the quoted tariff may not be reflective of the actual costs and risks, resultantly providing lower/higher returns under unfavourable/favourable actual conditions.

The report also notes that the bidders, in order to manage risks, often include a portion of the fixed cost into variable charges and vice versa. This is due to the fact that the recovery of fixed charges is linked with plant availability and that of variable charges is linked with actual net generation. In case the risk of a lower PLF is presumed, the bidder might load the variable cost on to fixed charges. Meanwhile, in case savings on account of operational parameters such as heat rate, auxiliary consumption, secondary fuel oil consumption etc. is presumed, the developer might load the fixed charges on to the variable cost. Further, the pass through of uncontrollable factors like inflation, actual financing cost and project cost do not get passed on to the buyer in case of competitively bid projects. On the other hand, the cost-plus approach allows pass-through of most of the uncontrollable factors. Of late, it has been observed that the developers are more sensitive to these uncertainties and thus quote higher tariffs.

To conclude, the key findings of the report quite closely depict the actual market scenario for competitive bidding for TPPs. Risks facing the developers in terms of fuel availability, power off-take and fuel-cost pass through have adversely affected developer participation in Case-I and Case-II projects put up for bidding. This is especially true for ultra mega power projects, which have failed to take off owing to risks and uncertainties.