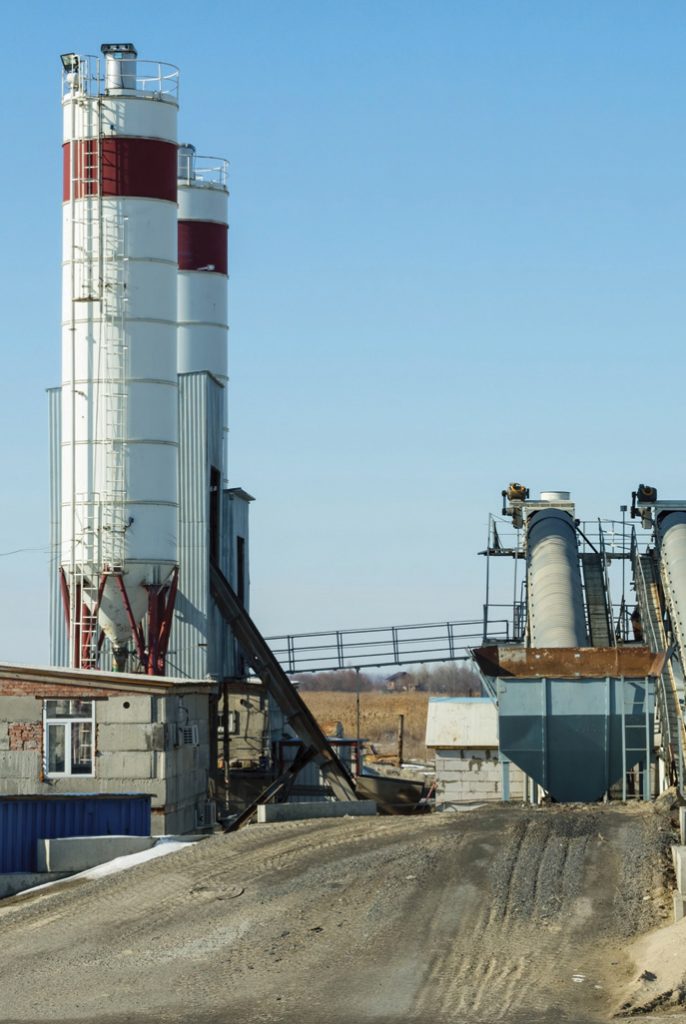 The cement industry plays a key role in the economic development of emerging markets. Along with aggregates and water, cement is the key ingredient in the production of concrete, and is an essential construction material that enables large infrastructure projects in the energy, water and transport sectors.  It is also used in the construction of modern buildings. Given the rapid urbanisation rates in developing countries like India, cement is crucial for delivering on the “climate smart” cities agenda. These emerging markets have been rapidly increasing their cement use and now account for over 90 per cent of cement consumption worldwide (4.1 billion tonnes in 2016).

However, cement accounts for at least 5 per cent of the anthropogenic emissions of greenhouse gases, and this share may be even higher as per some estimates. In addition, energy-related expenses in the cement sector – mainly on fossil fuels and electricity – account for 30-40 per cent of the industry’s total cash costs. While current energy prices are still recovering from the global financial and economic crises, there is no doubt that they will continue to increase in the long run.

In recent years, the cement industry has been successful in reducing its operating costs and improving its carbon footprint (emissions per unit of output) by improving energy efficiency, increasing the use of alternative fuels and deploying renewable energy sources.

India has emerged as the second largest producer as well as consumer of cement in the world after China owing to the enormous growth in the infrastructure and construction sector over the past two decades. According to the Cement Manufacturers’ Association (CMA), the overall cement production during 2017-18 stood at 297.56 million tonnes (mt), almost 6.3 per cent higher than the previous year. Currently, there are a total of 200 cement plants in the country, as per the Bureau of Energy Efficiency (BEE), with an average electrical energy consumption and thermal energy consumption of 65 kWh per tonne of cement and 667 kCal per kg respectively. The Indian cement industry is one of the most efficient in the world, with a well-deserved reputation for technology interventions. The total energy consumption in a typical dry process cement plant comprises 75-80 per cent fuel (thermal energy) and 20-25 per cent electricity (electrical energy). Almost 99 per cent of the fuel consumption is used for clinker burning or pyro-processing.

Being an energy-intensive sector, the cement industry has been adopting the best manufacturing practices to optimise its consumption. Over 95 per cent of manufacturing plants have moved from the wet/semi-wet process to the dry process for cement manufacturing. In addition, they have adopted energy-efficient technologies and products, increased the use of alternative fuels and raw materials, and deployed waste heat recovery (WHR) systems. Given the high degree of blended cement utilisation, Indian cement producers are one of the largest consumers of fuel and electrical energy on a per tonne of product basis. An additional benefit in terms of sustainability is the lower per tonne of carbon dioxide (CO2) emissions.

According to Sujit Sen, vice-president, process, Penta India, “There are certain macro factors that determine the focus on energy efficiency in cement plants. The first would be the price and availability of fuel. India has always seen higher fuel and electrical energy costs compared to other parts of the world. Therefore, most of our cement plants have been installed with highly energy-efficient processes and technology.”

Productivity is the dominating factor, and as long as plants cannot work at design or higher capacity, the specific energy consumption (SEC) will not be reduced. Operating at design capacity for half the month and then shutting down or operating continuously with lower than the design throughput is also not a viable solution as it will reduce the life of equipment and increase the cost of expensive consumables like refractories and lubricants. Sustained energy efficiency is possible only when plants operate continuously at a 100 per cent run-time and greater than 100 per cent production factor.

Therefore, the first major challenge of setting up a new cement plant is to estimate demand as accurately as possible and not build a plant of higher capacity than needed. The second challenge is to conduct a design review before setting up a plant. This is important since around 60 per cent of operating costs are determined before the plant is set up and commissioned. In such reviews, questions pertaining to the layout, sizing, selection, reliability and maintenance of the equipment should be addressed along with other issues. The third challenge is to conduct tests on equipment and systems before commissioning in order to identify inherent faults that would drive up costs during operations due to breakdowns and inefficient performance.

The implementation of management information systems would help keep track of key performance indicators, including plant operations and productivity, in a continuous manner. It is often observed that these tools are not fully utilised by the plant personnel, and only help in generating reports rather than in decision-making. It is also necessary to ensure that all sensors are calibrated and working properly. Proper implementation of IT systems can help reduce not only energy costs, but operating costs as well.

However, it is important to understand that long-term plant energy efficiency cannot be guaranteed with the mere selection of the most efficient equipment. Rather, energy (fuel and power) efficiency over the long term is largely driven by the chemical uniformity of the kiln feed, mastery of the burning zone (primarily a kiln operation), and the plant reliability factor (number of stoppages due to incidents). All these parameters are connected to plant preventive maintenance. 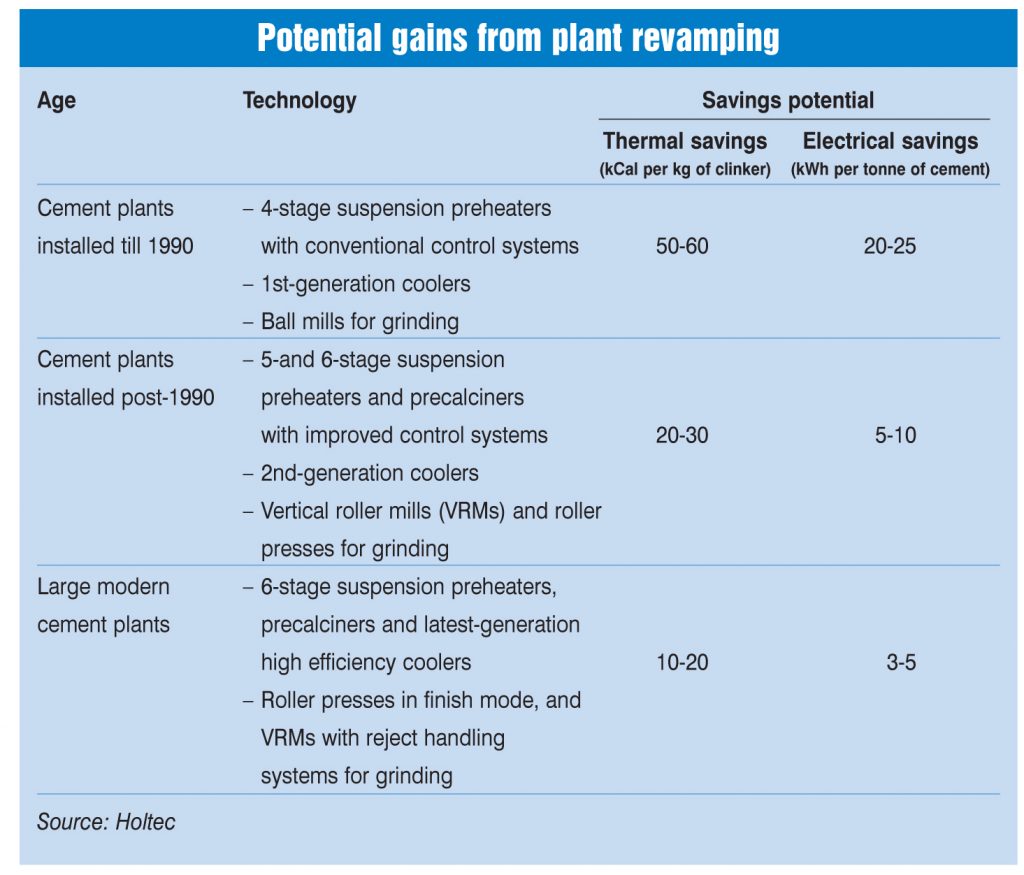 One of the major drivers for improved energy efficiency in the industry has been the Perform Achieve Trade (PAT) scheme, an energy conservation drive launched by the BEE under the National Mission for Enhanced Energy Efficiency.

For designated consumers (DCs) in the cement sector, the BEE has set the threshold limit at 30,000 tonnes of oil equivalent (toe) of energy consumption per annum. Under PAT Cycle I (2012-15), 85 DCs from the cement industry across various states were notified and assigned mandatory energy reduction targets. During the first cycle, the cement sector achieved energy savings of 1.480 million tonnes of oil equivalent (mtoe), around 81.6 per cent higher than the targets notified for the DCs.

The PAT scheme also provides the option to industries that surpass their saving targets to receive energy saving certificates (ESCerts) and trade these additional certificates with other energy-intensive industries, which can utilise them to meet their own reduction targets. During the first ESCert trading cycle, which ended in January 2018, around 15 DCs from the cement industry with a buy requirement of 122,126 ESCerts participated in trading and were able to achieve full compliance.

Biswajit Dhar, senior vice-president (technology and research centre), UltraTech Cement, says, “We are constantly examining and evaluating measures to optimise the clinker component per tonne of cement. Fly ash has a direct impact on SEC reduction, since it reduces the clinker component in cement to a certain extent. However, constraints exist, like the lac of availability of good quality fly ash and, in certain cases, mph transportation costs of fly ash when it has to be sourced from a distance.”

Further, K.N. Rao, director, energy and environment, ACC, says, “Ten plants of ACC (nine integrated plants and the Tikaria grinding unit) have been identified as DCs under PAT. Though PAT poses a significant challenge to capex investments, we see opportunities in long-term growth. One can consider upgrading old plants, co-processing industrial and municipal waste in cement kilns, generating power from the waste heat in kilns, and/or using waste from other industries like fly ash and slag in the manufacturing process.”

Further, to achieve their SEC target, energy audit teams can conduct a detailed process diagnostic study on the plant to determine present operating conditions, compare measured data with expected values based on design and best achieved benchmarks, and identify the root cause of the energy losses using tools such as process simulation.

Meanwhile, WHR systems have a huge energy saving potential. They utilise waste heat from both the kiln and the grate cooler. Besides, power shortages have compelled many players to set up captive power plants (CPPs) to fulfil their energy needs.

According to Dr G.V.K. Prasad, executive president, operations, KCP Limited, “We have successfully commissioned 8.25 MW of hydroelectric power projects in Guntur district of Andhra Pradesh. These are generating 34 million kWh of electricity per year. We have also set up 3.25 MW of wind power capacity in Tamil Nadu. In addition, a 2.3 MW power unit has been installed that uses waste hot gases generated from one of our cement units located in Andhra Pradesh. About 30 per cent of our electrical energy needs are met from this WHR system. Recently, we have successfully commissioned a 1.15 MW solar photovoltaic project, India’s first such CPP, in Krishna district, Andhra Pradesh.”

At Birla Vikas Cement Works, owned by Birla Corporation Limited, India, the older and inefficient raw mill vent fans have been replaced with more efficient fans, and variable speed drives have been installed to control the air volume. These reduced the energy consumption by 0.36 kWh per tonne of clinker. The capital cost for the measure was around $0.033 per annual tonne of clinker capacity.

The cement industry is also a key source of CO2 emissions. Every tonne of ordinary Portland cement that is produced releases an equivalent amount of CO2 into the atmosphere and accounts for nearly 5 per cent of all anthropogenic carbon emissions.

The Cement Sustainability Initiative (CSI) is a global initiative under the World Business Council for Sustainable Development led by 23 member countries. It includes Indian cement companies as well. CSI members account for 66 per cent of the total amount of cement produced in the world. In India, CSI, in partnership with the Confederation of Indian Industry (CII) and CMA, has launched a project to review the impact of activities and projects implemented in the five-year period after the development of the Low Carbon Technology Roadmap for the Indian Cement Sector. This initiative is expected to report on the current status of the different tools needed to achieve low carbon growth and outline further support required on the technical, policy and fiscal fronts to achieve the roadmap targets for 2020.

The industry on its part has also taken other initiatives to tackle this issue. As per G. Jayaraman, executive president, Birla Corporation Limited (BCL), the company secured carbon emission reduction certificates for 100,000 tonnes of CO2, which were successfully traded on the United Nations Framework Convention on Climate Change platform. For the coming three years, BCL is focusing on renewable energy, primarily solar and biomass power plants.

Energy efficiency projects are sound investments that can generate high returns at lower risk. There is significant untapped potential in this sector. As per an International Finance Corporation (IFC) 2017 report, the different market barriers that need to be overcome are: