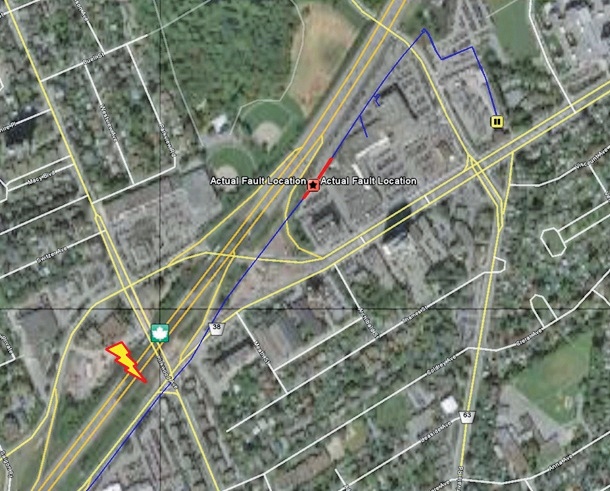 Hydro Ottawa is the third largest distribution company in Ontario, Canada, with customers spread across Ottawa and Casselman village. Although it offers industrial load, its customer base is primarily residential and commercial.

The automatic fault location system (AFLS) was incorporated into the distribution system of Hydro Ottawa in 2014. It involves power quality monitors, database applications, up-to-date circuit models and geographic information system (GIS) databases, and provides automatic fault identification and fault location estimation. The AFLS has become a valuable tool for quickly and accurately identifying fault locations on medium voltage (MV) distribution system. The AFLS uses measurements recorded at MV stations. These measurements are downloaded automatically and incorporated into a relational database. These measurements help in calculating  the estimated reactance from the station to the fault. The calculations are based on phasor measurements derived from the voltage and current samples, and calibration constants based on previous fault data and known locations. The result of these calculations is an estimated “reactance to fault” or XTF. The XTF values are compared with line models that estimate the positive-sequence and zero-sequence reactance between station and line structures. The estimated locations can be viewed via the corporate intranet and displayed geographically using maps sourced from a GIS database. The calculated fault locations are typically available on the Hydro Ottawa intranet within 10 minutes after a line fault occurs.

Installation of monitors for recording power quality parameters at Hydro Ottawa began in 2002. Initially, monitoring was done at a small number of interconnection points with the transmission system owned by Hydro One.

At present, the power quality system at Hydro Ottawa consists of more than 125 monitoring locations, including all 8.3 kV, 13.2 kV and 27.6 kV substation buses. The power quality monitors are installed on the secondary side of the substation transformer and monitor bus voltage and current. The majority of data is downloaded from the monitors using broadband communications (Ethernet) via the corporate network. However, data for a number of substations is still downloaded through a telephone modem. The power quality monitors are accessed by other computers on Hydro Ottawa’s network via fibre optic wide area network connections. The monitors record mostly line-to-ground voltages. 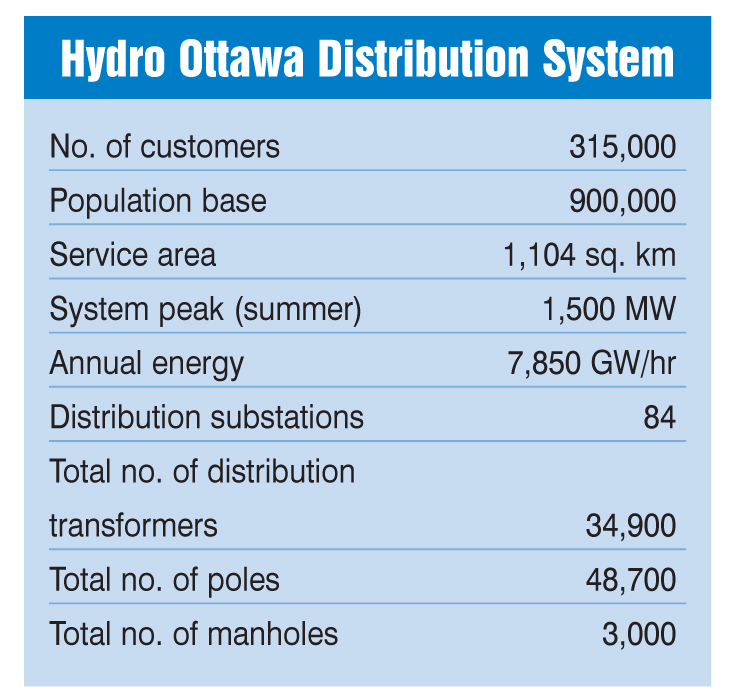 secondary transformers. At Hydro Ottawa, each substation usually has four buses, and each bus usually supplies four feeders. The current from each transformer is monitored by a single power quality and revenue meter.

Measurements recorded by power quality monitors are triggered using high and low root mean square (RMS) voltage thresholds. When a voltage sag (less than 90 per cent of the nominal) or voltage swell (more than 110 per cent of the nominal) is detected, it triggers voltage and current waveform samples and RMS samples to be recorded. The Hydro Ottawa power quality monitors are configured to record voltage and current waveform samples at a rate of 128 points per 60 Hz cycle, with typically five cycles of pre-trigger and many cycles of post-trigger data.

The power quality monitors communicate with a server via a broadband Ethernet connection. This allows downloading of fault measurements from the monitors to the corporate network typically within a minute.

The distribution circuit models are stored in databases which are extracted from the Hydro Ottawa GIS database. These models provide the geospatial coordinates for the nodes comprising the line segments of distribution feeders. These coordinates are converted into the WGS 84 coordinate system so that the maps can be displayed in standard GIS software systems as overlays on maps and aerial imagery. The 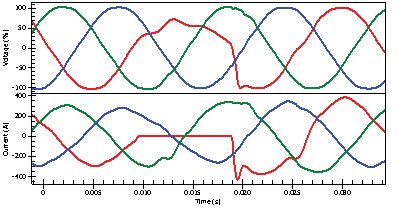 circuit models include conductor types with positive-sequence and zero-sequence impedance characteristics, which are used in different line sections. The number of phases for each line segment is also stored whether the line section is underground or overhead.

The fault measurements are incorporated into the relational database usually within a few minutes of fault occurrence. Once in the database, the measurements can be queried and analysed directly using workstation computer applications or indirectly via intranet web applications.

Each measurement downloaded by the remote power quality monitors is analysed by a power quality database management and analysis software system for voltage characteristics and zero-sequence current characteristics, indicating that a single-phase fault has occurred. Other line-line voltage characteristics are examined that indicate that a two-phase or three-phase fault has occurred. Harmonic content and event duration are used to identify events such as magnetising inrush events. Zero-sequence and negative-sequence current content is used to search for other overcurrent events that are not faults but are otherwise noteworthy for automatic notification.

As part of its grid modernisation, Hydro Ottawa has been installing fault circuit indicators (FCIs) that are polled via its SCADA system. The status of each FCI is stored in the historian system. As each fault measurement is imported into the AFLS database, a query on the historian system is made to determine if any FCIs have changed status. 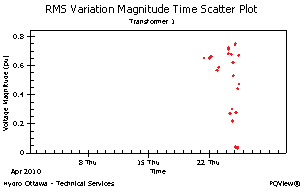 Hydro Ottawa has experienced five load tap changer failures in the past six years. The power quality monitors have been successful in recording the waveforms and RMS events at the time of the failure. Fig. 2 shows the voltage and current waveforms during a tap changer transformer failure. Fig. 3 shows a timeline of RMS voltage dip events during the same series of failures. Fig. 4 shows a trend of the short-
term flicker perception (Pst) recorded as tap changer failure began.

Since the core development of the AFLS at Hydro Ottawa in 2014, minor revisions have taken place in 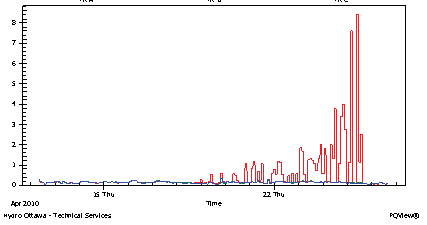 the system. It was adopted in a full-fledged manner by system operators, operations engineers and others in 2016. The AFLS has proven dependable and resulted in improved asset availability. As system operators and operation engineers get more familiar and comfortable with the AFLS, Hydro Ottawa can expect significant benefits. These benefits are a reduction in the time to find and repair faults and, therefore, a reduction in operations and maintenance expenses, as well as outage duration, which, in turn, will cut down the customer average interruption duration index. Plans for future enhancements to this system involve microprocessor relay integration, integration with the outage management system, and automated reporting for IEC and IEEE standards compliance.