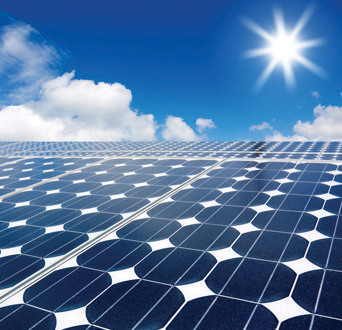 The tariffs for both wind and solar power have reached the sub-Rs 3 per kWh level. In contrast, coal-based power tariffs are constantly on the rise given the increase in coal prices. As a result, discoms are now opting for cheaper solar and wind power, which will also help them meet their renewable purchase obligations.

However, there were a few dampeners as well to the overall growth of the renewable energy sector, including the renegotiation of terms of older power purchase agreements (PPAs) for both solar and wind projects and the very low capacity additions in the wind segment. These factors have definitely slowed the segment’s growth momentum, which missed its capacity addition target for the second year in a row. Against a target of 14,510 MW for 2017-18, the new capacity addition from renewables stood at 11,787 MW, effectively achieving only 81 per cent of the target. However, the capacity addition in 2017-18 was slightly higher than the 11,320 MW added (against the target of 16,660 MW) in 2016-17.

The outlook for the coming years seems positive. Over 15 GW of capacity has been tendered in 2018 so far, making the achievement of the government’s target of 175 GW of renewable energy till 2022 look more realistic. Waste-to-energy (WtE) is also emerging as a key focus area.

India has a total of 21.6 GW of installed solar capacity till date, of which impressive capacity additions totalling about 9.3 GW took place during 2017-18. It is safe to say that the solar market has reached a stage of maturity, with favourable policies and falling capital costs attracting significant interest from developers and investors. Tariffs have also declined steeply over the past year, falling to a record low of Rs 2.44 per kWh in the Bhadla solar park auction for 500 MW in May 2017. The rapid decrease in tariff can be attributed to the rapidly falling module prices as well as the stiff competition resulting from the entry of international developers in the Indian solar market.

Even with this promising solar scenario, domestic manufacturing has not been able to advance much, due to the cheaper modules being supplied by vendors especially from China and Malaysia. However, the government is determined to promote domestic manufacturing through the Pradhan Mantri Yojana for Augmenting Solar Manufacturing or PRAYAS, to develop 5 GW of capacity by 2019. Several international players are also setting up manufacturing facilities in India so as to comply with the domestic content requirement of various projects.

The Indian solar segment still faces a number of unresolved challenges in terms of the inability of discoms to buy solar power due to their poor financial health, grid integration issues due to intermittent solar generation, and high interest rates. In addition to this, the recent government announcements pertaining to safeguard and anti-dumping duties have added to the list of uncertainties for the industry. The government had planned 12-15 GW of solar capacity additions annually to reach their target of 100 GW by 2022. However, with about 80 GW still to be commissioned to meet this target and the solar market being currently plagued by so many uncertainties, the government needs to address these issues at the earliest.

India, with 34 GW of installed wind capacity as of March 2018, ranks fourth globally in terms of total installed wind capacity. However, the year 2017-18 has seen sluggish growth with only 1.7 GW of wind projects commissioned till March 2018, of a target of 4,000 MW. In comparison about 5.5 GW of wind capacity was installed in 2016-17. This sudden dampening can be attributed to the transition from feed-in tariffs (FiTs) to competitive bidding for wind project development. Wind energy tariffs dropped significantly following the auctions carried out by the SECI in February 2017 and September 2017. In fact the tariff fell to a historic low of Rs 2.43 per unit in the Gujarat Urja Vikas Nigam Limited wind auctions of December 2017, which is even lower than the lowest tariff discovered in the solar auctions.

Most of the wind-rich states shied away from signing PPAs after the first auction which took place in February 2017, and many states even cancelled the previously signed PPAs which were awaiting approval from state electricity regulatory commissions. In Karnataka, for example, the Karnataka Electricity Regulatory Commission passed an order in September 2017, setting a much lower FiT than the one at which PPAs had been signed earlier in response to the low tariffs being realised in auctions. This move not only put at risk the 326 MW of capacity under construction, but required the tariffs for the already commissioned 273 MW to be renegotiated.

However, wind industry players are optimistic that the transition to the competitive bidding regime will result in the auction of 10 GW of wind power annually. Wind power developers are also looking at other options such as off-shore wind energy, solar-wind hybrids, and repowering of existing wind farms as exciting investment opportunities for the future. 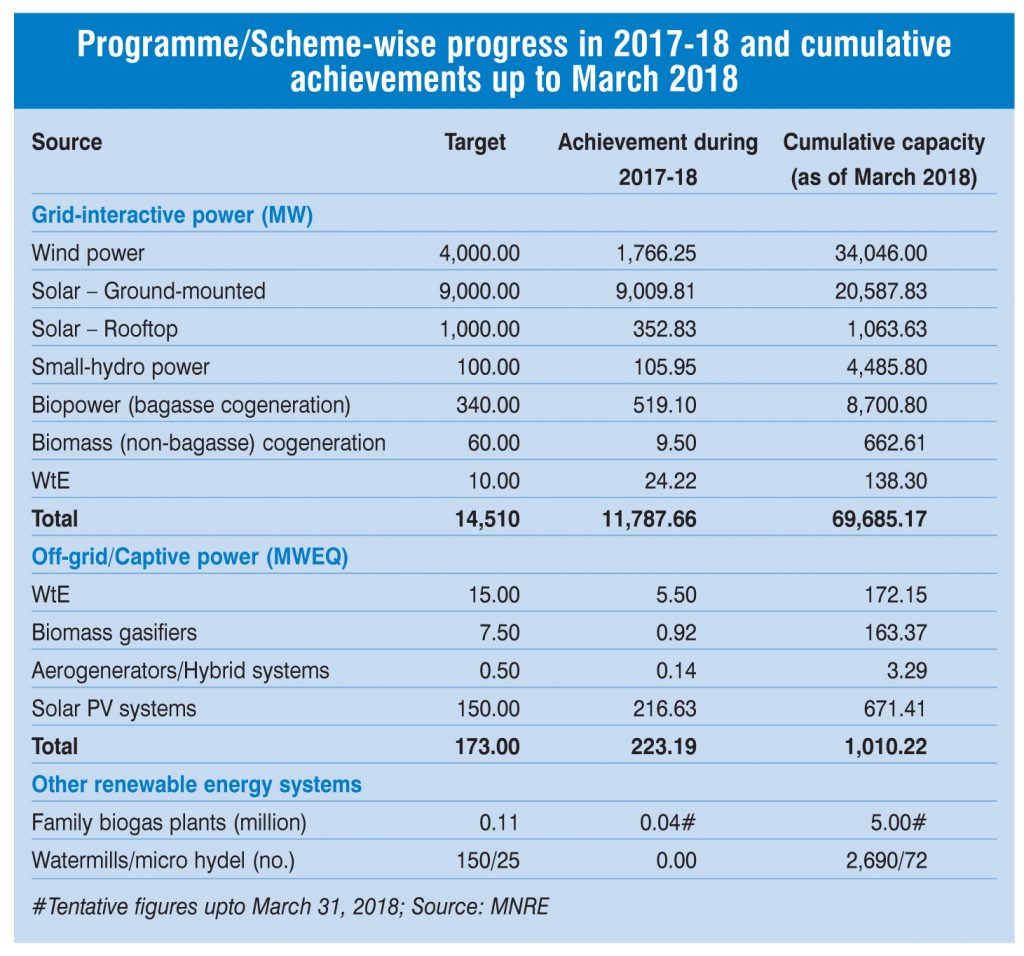 The country’s total installed capacity of bioenergy is about 9.4 GW (as of March 2018), of which biomass and cogeneration projects contribute 9.3 GW and WtE contributes the rest. This installed capacity is very small when compared to the total available potential of 25 GW. In fact, in 2017-18 only 528.6 MW of biomass and cogeneration projects and a few WtE projects were developed.

The bioenergy segment has been neglected owing to the lower prices being offered by the solar and wind segments. There is also a clear lack of policy and regulatory support which discourages developers from venturing into these uncharted waters. The collection, storage and transportation of biomass and waste also pose additional challenges. In fact, states such as Maharashtra, Rajasthan and Karnataka have even increased the tariffs to encourage the private sector to set up bioenergy projects. However, along with tariff hikes, innovative business models as well as fuel logistics solutions are also required to attract active participation. In this backdrop, it seems highly unlikely that the government will meet its target of 10 GW of bioenergy capacity by 2022.

No takers for small hydro

The small-hydro segment has been plagued by various challenges and uncertainties for a long time, which makes it impossible to meet targets year after year. As a result, only 4.5 GW of capacity has been installed, of a total estimated potential of 20 GW spread across 6,474 sites. Keeping with the trend of the past few years, a very disappointing 106 MW was installed in 2017-18, against the target capacity of 100 MW.

The small-hydro segment, like bioenergy, is eclipsed by the success of the solar and wind segments. The private sector seems reluctant to invest in this segment owing to high capital costs for lower returns. This reluctance is further aggravated by issues in obtaining permissions from government agencies (which causes delays in commissioning), unavailability of grid connectivity and the unpredictable nature of rainfall. Only Karnataka, Himachal Pradesh and Maharashtra have utilised their small-hydro potential, while states such as Arunachal Pradesh, Gujarat and Assam have not even utilised 15 per cent of their potential. Urgent government interventions are required to create interest amongst the private sector towards this declining segment.

There is no denying the fact that the solar and wind segments have seen unprecedented growth in the past few years, with a lot of interest from international investors and developers. However, it is also true that the success of solar and wind has put a dampener on other segments such as small hydro and bioenergy. If the renewable sector is to meet its targets in time, the government will have to act quickly to address the various uncertainties and provide long-term policy and regulatory clarity.