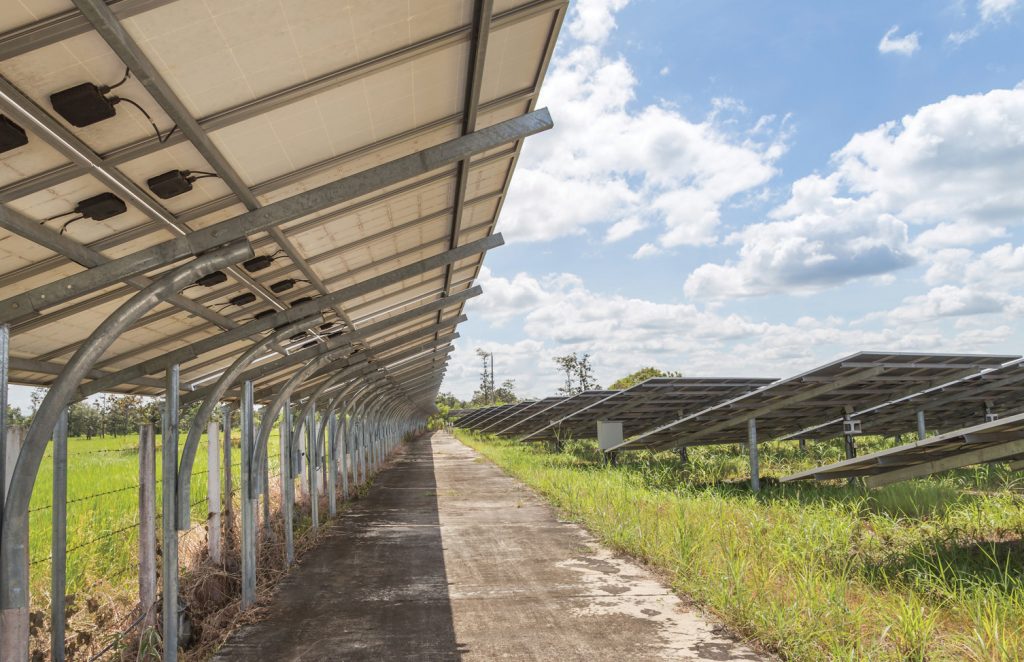 Solar is undoubtedly the fastest growing segment in the power sector today. The installed solar capacity base has reached 21.6 GW at present from merely 1.7 GW in 2011-12, registering an impressive compound annual growth rate of over 52 per cent. Over the past two years, solar power capacity additions have paralleled and even surpassed thermal capacity additions. Ample policy focus, falling bid prices and declining capital costs resulted in accelerated solar power capacity additions in 2016-17 and 2017-18. However, the dynamics in the solar power segment are now changing. Tariffs are bottoming out as developers are bidding more cautiously owing to uncertainty over the supply and pricing of modules. That said, the solar story continues to stay strong given an extensive pipeline of projects recently tendered/to be tendered by central/state agencies and a growing interest in the segment by domestic and international players.

Power Line presents a round-up of key trends and developments in the solar segment.

While ground-mounted solar has been meeting/exceeding targets, the progress on the rooftop front is quite slow as only 35 per cent (353 MW) of the capacity additions of 1,000 MW were met during 2017-18. Given that 40 GW of the 100 GW solar target for 2022 has to come from rooftop solar plants, the current progress is rather slow.

The lowest solar power tariff in India (Rs 2.44 per kWh) was discovered in an auction conducted by the Solar Energy Corporation of India (SECI) in May 2017 for projects in the Bhadla Solar Park, Rajasthan. According to Mercom India, such low bids are due to intense competition amongst developers to win projects even if returns are not very lucrative. The developers have been bidding aggressively in an effort to capture market share assuming that component costs will continue to fall.

However, the tariffs have been consistently rising post this auction. In another SECI auction for the Bhadla Solar Park that concluded in end-2017, a tariff of Rs 2.47 per kWh was discovered. Meanwhile, the Gujarat solar auction received the lowest bid of Rs 2.65 per kWh in September 2017. The auction results announced in March 2018 showed a further rise in tariffs. Maharashtra’s 500 MW solar power auction received the lowest bid of Rs 2.83 per kWh, while Karnataka and Gujarat witnessed bids of Rs 2.94 per kWh and Rs 2.98 per kWh respectively. However, Gujarat has now scrapped the auction due to higher than envisaged tariffs. In NTPC Limited’s latest tender for 750 MW capacity at the Ananthapuramu Ultra Mega Solar Park in Andhra Pradesh, the results of which were announced in May 2018, the lowest tariff of Rs 2.62 per kW was discovered.

Experts are of the view that solar tariffs have bottomed out. The participation in recent auctions has been relatively tepid owing to uncertainty in the price of imported solar modules as the threat of anti-dumping duty looms over the industry. In addition, owing to greater demand for Chinese modules, their price is increasing (it rose by 19 per cent in the second half of 2017). Further, it is expected that global photovoltaic module supply would go down in 2018. Bidders are taking cognisance of these factors and therefore recent auctions have resulted in higher bids.

Another notable trend in the segment is that of increased consolidation through mergers and acquisitions (M&As). The key M&A deals announced in recent months include those between ReNew Power and the Canada Pension Plan Investment Board, Orb Energy and the Netherlands Development Finance Company, ReNew Power and KCT Renewable Energy, and Piramal Finance and Mytrah Energy. This can be mainly attributed to the measures taken by these companies to offload liabilities and acquire well-performing assets in order to expand their portfolios. Besides, a surge in M&A activity has also led to the entry of a large number of global participants with deeper pockets, big appetites and the bandwidth to withstand profit margin pressures.

In August 2017, the Ministry of New and Renewable Energy (MNRE) released the guidelines on competitive bidding for the procurement of power from grid-connected solar projects rated 5 MW or above. These guidelines focus on strict timelines for the completion of land acquisition, transmission connectivity and other approvals; payment security mechanisms; compensation for the termination of power purchase agreements; and lender substitution rights. Further, in order to provide project visibility to developers, the MNRE released a tendering trajectory in November 2017, which stated that about 30 GW each would be open for bidding in 2018-19 and 2019-20.

Union Budget 2018-19 allocations for the solar power segment stood at Rs 28,937.4 million for 2018-19, a nearly 14 per cent decline compared to 2017-18. In addition, customs duty on solar tempered glass for manufacturing solar modules has been reduced to 0 per cent from 5 per cent, which could help in lowering domestic manufacturing costs. Recently, in May 2018, the central government scrapped the 7.5 per cent import duty on modules, which was levied in August 2017. This is a key positive development for the sector.

In March 2018, the central government announced that it would soon launch the Kisan Urja Suraksha evam Utthaan Mahabhiyan scheme, which aims to install solar projects and pumps in rural areas. The proposed scheme will enable farmers to sell surplus solar power to discoms and earn extra income.

The key challenge facing the solar industry is the uncertainty regarding module supply in the coming months/ years. In January 2018, the Directorate General of Safeguards Customs and Central Excise recommended imposing a 70 per cent safeguard duty on imported solar cells and modules from China and Malaysia for 200 days. The Madras High Court placed a temporary stay on the recommendation but, in the meantime, the recommendation has affected the industry. If approved, the safeguard duty will be levied on products imported from all countries except developing countries (other than China and Malaysia).

Effectively, it covers around 90 per cent of cells and modules used in India. Besides, there are issues related to the anti-dumping duty as well. While these proposals are positive for domestic solar module manufacturers, the decline in imports will lead to a severe supply crunch.

Further, delay in the commissioning of power evacuation infrastructure associated with solar projects is a challenge. This is because solar power plants take a few months to develop from concept to commissioning, while transmission networks take nearly two-three years to be developed. In addition, the inadequate implementation of net metering policies in many states is hampering the uptake of rooftop solar.

As per Mercom India, in the first four months of 2018, over 14 GW of solar projects have been tendered, while less than 2 GW has been auctioned. In January-February 2018, SECI released tenders for the setting up of 5,000 MW of grid-connected solar power projects. In March 2018, NTPC tendered 2,000 MW of grid-connected solar projects to be developed across the country. Further, states such as Uttar Pradesh, Karnataka, Tamil Nadu, Maharashtra and Assam have also released tenders for auctioning solar power capacities.

Overall, the outlook for the solar power segment is positive given the impressive line-up of projects as well as the government’s resolve to not just meet but also exceed the ambitious 100 GW solar target by 2022.