Despite being an early entrant into the nuclear energy sphere, India has been slow in harbouring its nuclear ambitions with only about 6,780 MW of installed capacity. However, India has been consistently exploring the option of nuclear power as a complement for fossil fuels in the short run and as an energy security solution in the long term. Even though it has reduced its original 63,000 MW nuclear power capacity target to 22,480 MW by 2031, the government has taken several enabling steps to strengthen its nuclear energy capacity through foreign technical cooperation. The segment has been witnessing a mixed trend as the country is divided between pursuing its climate change commitments and fulfilling its moral and social obligations. Power Line presents an overview of the developments in the country’s nuclear power segment…

As of March 31, 2018, the installed capacity of nuclear power plants in the country stood at 6,780 MW, which is nearly 2 per cent of the total installed capacity. The installed capacity is spread over 22 reactors across seven nuclear plants, and is being operated entirely by Nuclear Power Corporation of India Limited (NPCIL). The plants are the 2,000 MW Kudankulam Nuclear Power Project (KNPP) in Tamil Nadu, 1,400 MW Tarapur Atomic Power Station (APS) in Maharashtra, the 1,180 MW Rajasthan APS in Rajasthan, the 880 MW Kaiga Generating Station in Karnataka, the 440 MW Madras Atomic Power Station in Tamil Nadu, the 440 MW Narora APS in Uttar Pradesh and the 440 MW Kakrapar APS in Gujarat. The 100 MW pressurised heavy water reactor (PHWR) RAPP-1 is under long-term shutdown since 2004. Of the 21 operational reactors, 13 reactors with an installed capacity of 4,280 MW fall under the purview of International Atomic Energy Agency safeguards and use imported fuel. Meanwhile, the remaining eight reactors with an aggregate capacity of 2,400 MW use indigenous fuel. 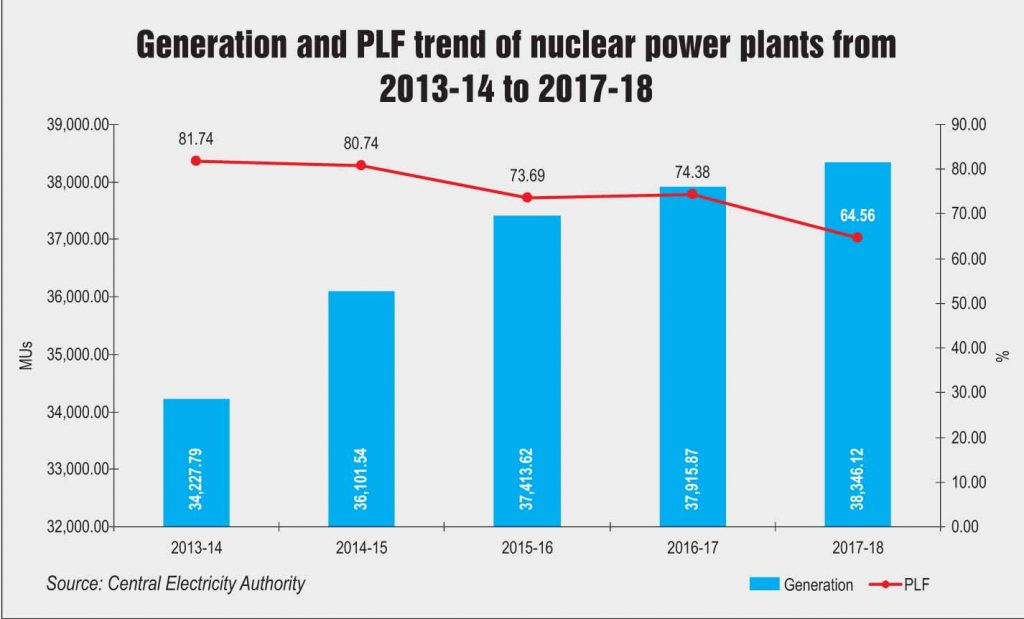 From 2013-14 to 2017-18, the total installed nuclear power capacity increased at a compound annual growth rate (CAGR) of 9.13 per cent. However, no capacity was added in the past year. Despite considerable slippage of 3,300 MW in the last five years, the country has added around 2,000 MW of capacity to its nuclear energy portfolio. The last unit commissioned was the second unit of the KNPP (1,000 MW) in March 2017. Before that, Kudankulam Unit 1 of 1,000 MW was commissioned in December 2014.

At a time when several countries have shut down nuclear reactors, India ranks third in the world in the number of nuclear reactors being installed, according to the World Industry Status Report, 2017. As per the Department of Atomic Energy, the country has a total of 6,700 MW of nuclear capacity under construction. Further, in a major boost to the segment, the government has also accorded administrative approval and financial sanction for the construction of 12 nuclear power reactors with an aggregate capacity of 9,000 MW – 10 indigenous 700 MW PHWRs to be set up in fleet mode and two units of light water reactors to be set up in cooperation with the Russian Federation. The government has also accorded in-principle approval to five sites for locating future reactors based both on indigenous technologies and with foreign technical cooperation to enhance nuclear power capacity.

In order to provide an impetus to the nuclear segment in the country, the government has signed agreements for foreign technical cooperation with other countries, especially Russia. In June 2018, a subsidiary of the Russian State Atomic Energy Corporation Rosatom, NIKIRET, signed an agreement with Indian engineering services firm, Core Energy Systems Private Limited, for the promotion of technical security equipment in India. In October 2017, the government collaborated with Russia for the construction of the 2,400 MW Rooppur nuclear power plant in Bangladesh, marking the first Indo-Russian initiative to develop an atomic energy project in a third world country. The MoU for the project among India, Russia and Bangladesh was subsequently signed in March 2018. India is expected to soon bid for the construction and installation works for the plant. Further, in March 2018, India also signed an agreement with the French government to expedite work on NPCIL’s 9,900 MW Jaitapur Nuclear Power Plant in Maharashtra and commence work on the site by December 2018. The plant will comprise six nuclear reactors of 1,650 MW each and will be the world’s largest nuclear power unit. The construction of the reactors will be carried out by French state-run power utility EDF and general electric. Both the companies signed an agreement in June 2018 for the design of the conventional island for the plant and supply of its main components. 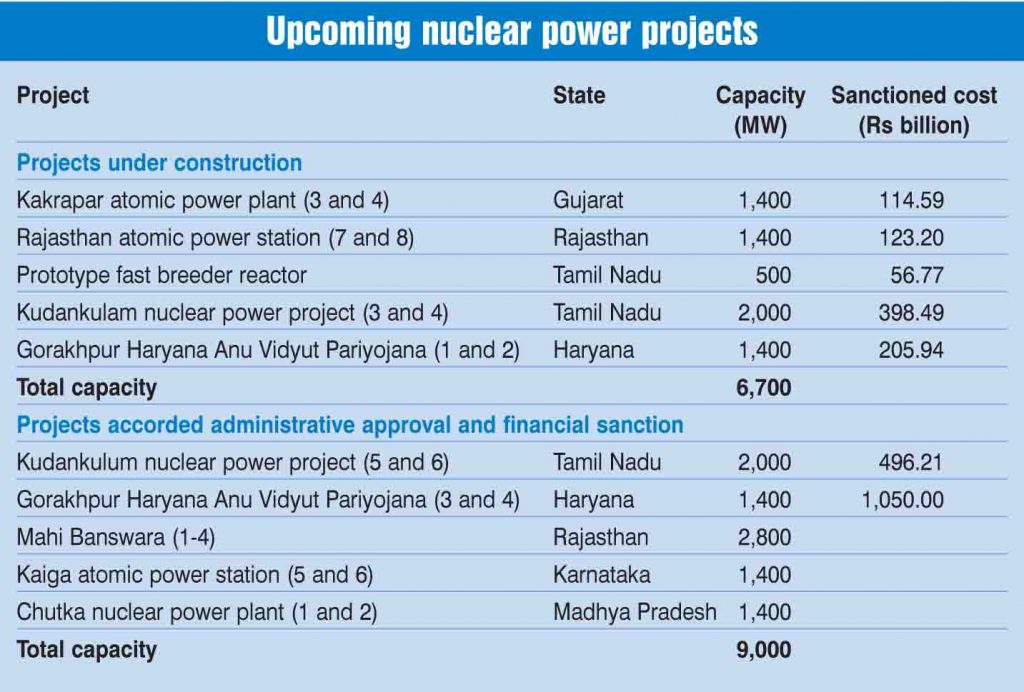 In a separate development, however, the Supreme Court recently received a request against NPCIL to shut down its Kudankulam power plant as the company has not yet set up an away-from- facility reactor to store the spent nuclear fuel from the plant. In order to resolve the safety concerns, the Supreme Court has granted NPCIL five years to build the storage unit by 2022.

Nuclear power capacity addition has faced significant time and cost overruns primarily due to delays in the process of land acquisition, statutory processes, delays in the supply of long delivery equipment, local protests, lack of skilled manpower, financial crisis of domestic vendors, etc.  Further, the declining costs of renewable energy combined with high capital and operations and maintenance costs of nuclear power plants presents an additional challenge with regard to nuclear power development in the country. Even though the low share of fuel cost and a competitive tariff range of Rs 1.07 to Rs 4.10 per unit provides some comfort for nuclear generation, renewable energy still seems to score over nuclear plants in view of the huge quantum of water required for nuclear power plants, which could be a challenge especially in regions facing a water crisis. That said, in contrast to popular belief, only 1 per cent of the waste is generated from nuclear plants after reprocessing and reusing the fuel. Further, in order to ensure safety compliance, extensive surveys are being carried out on a regular basis by the Environmental Survey Laboratories (ESL) of the Health, Safety and Environment Group, the Bhabha Atomic Research Centre, around nuclear power plant sites as per the requirements prescribed by the Atomic Energy Regulatory Board (AERB). As per these surveys, the average effective radiation dose due to the operation of NPPs at the plant boundary is a very small fraction (<1 per cent) of the limit prescribed by the AERB.

While there is still debate regarding India’s nuclear power policy, given the intermittent nature of renewables, economic and environmental costs of fossil fuels, and unavailability of natural gas reserves, nuclear power seems to be an inevitable option for India’s long-term energy security. Therefore, going forward, better water management, use of nuclear desalination applications, financial incentives and continued safety compliances will be crucial in the sustained operation of nuclear power plants in the country.