Supercritical units are designed with higher steam parameters of 247 kg per cm2, 565/593 °C. This increases the efficiency of such units by 2-3 per cent, and leads to corresponding savings in coal consumption and reduction in greenhouse gas emissions. As of January 2018, 60 supercritical units of 660 MW and 800 MW with a total capacity of 41,310 MW have been commissioned.

Further, an analysis carried out by the Central Electricity Authority (CEA) to estimate the reduction of CO2 emissions in supercritical units by March 31, 2017 shows that about 20.69 million tonnes of CO2 emissions have been avoided due to commissioning of supercritical technology-based units assuming that a business-as-usual scenario would have been commissioning of subcritical technology-based units.

During the period 2017-22, coal-based capacity addition will be largely based on supercritical technology. According to the latest available CEA statistics, while the national average thermal efficiency of coal/lignite-based power plants increased from 32.53 per cent in 2009-10 to about 34 per cent in 2013-14, it is expected to further improve during 2017-22 with the commissioning of large size supercritical units.

To encourage the adoption of supercritic-al technologies, the government has also formulated a policy on the automatic of letter of assurance/coal linkage (granted to old plants) to new plants in the case of replacement of old units with new higher efficiency supercritical units. 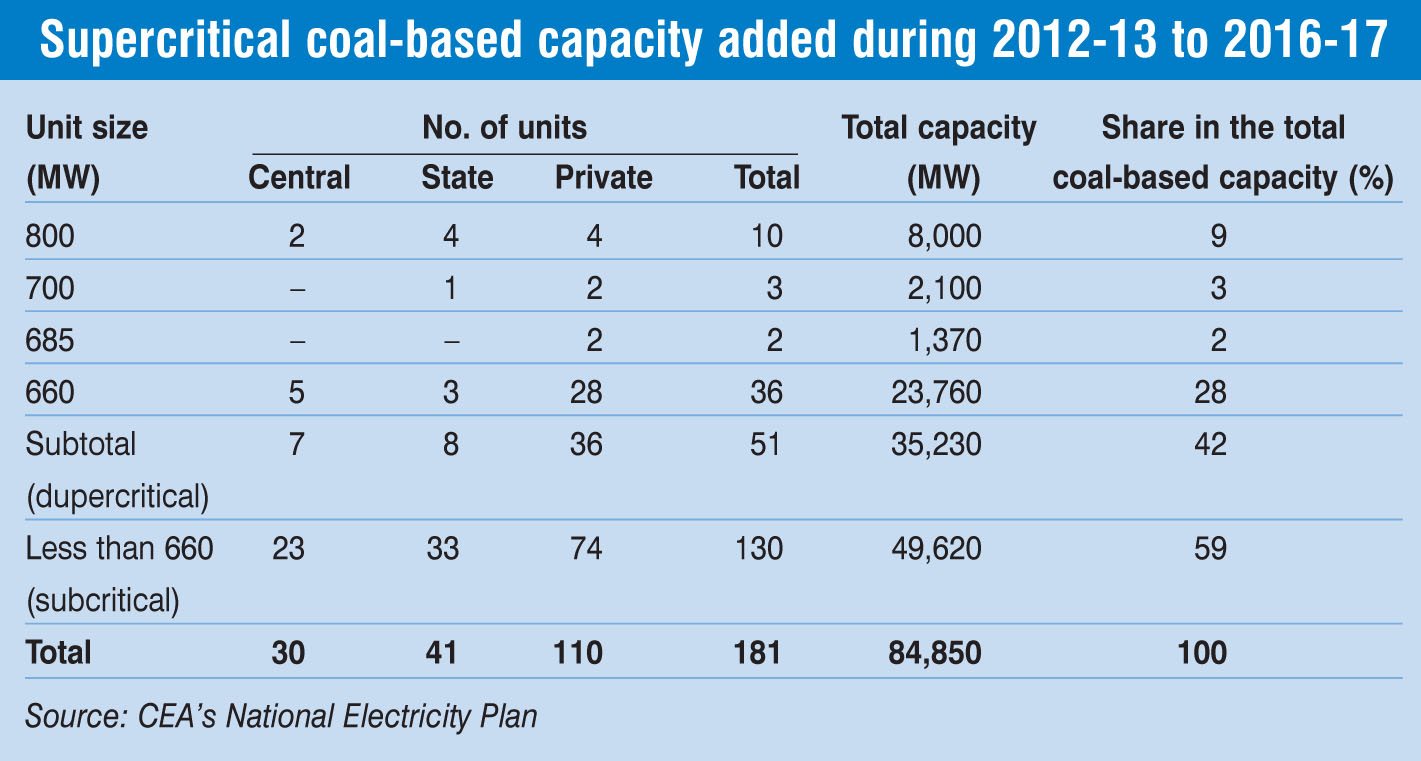 Ultra-supercritical plants operate at higher temperature and pressure (approximately 600 °C and 32 MPa), resulting in higher efficiency. These plants require less coal per kWh of electricity generated and generate lower CO2 emissions. The efficiency of these plants is as high as 44 per cent. However, the extreme operating parameters impose stringent restrictions on materials.

Meanwhile, advanced ultra-supercritical projects are currently at research and development (R&D) stage worldwide. In India, an R&D project has been taken up to indigenously develop advanced ultrasupercritical (A-USC) technology with steam temperature of around 700 °C, under the national mission for the development of clean coal technologies. NTPC, the Indira Gandhi Centre for Atomic Research and Bharat Heavy Electricals Limited have signed an MoU for the development of A-USC technology. The technology will provide targeted efficiency of 45-46 per cent against the 38 per cent efficiency of subcritical units and 41-42 per cent of supercritical units. This will further reduce coal consumption and CO2 emission by 11 per cent as compared to supercritical plants and 20 per cent as compared to subcritical power plants. Under the MoU, an 800 MW A-USC indigenous demonstration plant (with main steam pressure of around 300 kg per cm2 and temperature of 700 °C) will be set up during a seven-year period from the date of financial sanction by the government. Of this, two and a half years will be provided for design and development work, and four and a half years for power project construction. 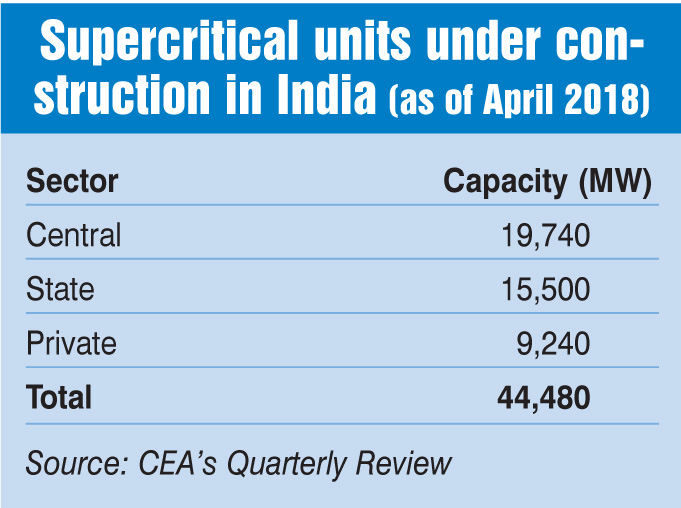 Integrated gasification combined cycle (IGCC) integrates a coal gasifier, a gas clean-up system and a gas turbine in combined cycle mode for coal gasification with either oxygen or air. The resulting synthesised gas (or syngas) primarily consisting of hydrogen and carbon monoxide is cooled, cleaned and fired in a gas turbine. Pulverised coal combustion technologies can generate power at higher efficiency and lower emission levels, as demonstrated in the US, the Netherlands and Spain. Technological advances are continuously made in syngas cleaning, especially at higher temperature. This removes the efficiency penalty of cooling the syngas to approximately 90 °C and again heating it to the required temperature for the gas turbine. Furthermore, IGCC technology provides opportunities for new product areas along with liquid fuel generation, hydrogen production, pre-combustion CO2 capture and integration of fuel cells, which may provide future options of zero emission coal technologies with higher efficiency.

Fluidised bed combustion (FBC) is a method of burning coal in a bed of heated particles suspended in gas flows. At sufficient flow rates, the bed acts as a fluid for the rapid mixing of particles. Coal is added to the bed and the continuous mixing leads to complete combustion and a lower temperature than that of pressurised fuel combustion. The furnace combustion takes place at 840 ºC-950 ºC. The reduction in SO2 and NO2 emissions in the combustion chamber without the need for additional control equipment is one of the major advantages of furnace combustion.

FBC boilers can burn fuel with a combustion efficiency of over 95 per cent, irrespective of the ash content. They can operate at an overall efficiency of 84 per cent (plus 2 per cent). In addition, they offer flexibility in terms of the quality of fuel. Even fuels like flotation slimes, washer rejects and agro waste can be burnt efficiently. There are two variants of FBC boilers – circulating fluidised bed combustion (CFBC) and pressurised fluidised bed combustion.

CFBC is more reliable and economical. It has a high processing capacity because of the high gas velocity. Improved combustion efficiency is attained through the use of an FBC mechanism. Further, such boilers save space as they do not need separate desulphurisation, denitration and fine-fuel crushing units. Also, the trouble-spots are minimised and maintenance is simplified.

The coal-based power generation segment is currently facing headwinds, particularly due to significant competition from renewable energy sources. To ensure that these plants remain relevant in India’s fast changing energy mix, plant operators need to upgrade them through new technologies like ultra-supercritical. Only such plants will be sustain operations in today’s competition-driven, and cost-and environmentally sensitive market.