Launched in November 2015 to improve the financial and operational efficiency of state discoms, the Ujwal Discom Assurance Yojana (UDAY) has been a game changer in the power distribution segment. Even though the discoms have not performed as per expectations, there has certainly been a noticeable improvement. A total of 32 states and union territories, except West Bengal, Odisha, Delhi and Chandigarh, have signed MoUs for the implementation of UDAY. The overall aggregate technical and commercial (AT&C) losses have reduced from 20.74 per cent as of March 31, 2016 to 18.76 per cent as of March 31, 2018 and the gap between the average cost of supply (ACS) while the average revenue realised (ARR) has decreased from Re 0.59 per unit in 2015-16 to Re 0.23 per unit in 2017-18. Further, the debt takeover by the state governments has helped reduce the interest burden and financial losses of discoms, thus improving their financial performance. However, the net results of the UDAY scheme have not been in line with the targeted trajectory.

Under UDAY, the state governments were required to take over 75 per cent of the discoms’ debt and issue bonds to the lenders. The remaining debt has to be paid back through bonds issued by the discoms. Debt worth Rs 2.7 trillion has been covered under UDAY, that is, over 60 per cent of the total debt of Rs 4.3 trillion as of September 30, 2015. Of the Rs 2.7 trillion debt, states and discoms have issued UDAY bonds worth Rs 2.3 trillion. The debt takeover by state governments and the subsequent reduction in debt servicing rates from 11-12 per cent to 7-8 per cent have helped achieve savings in interest costs. 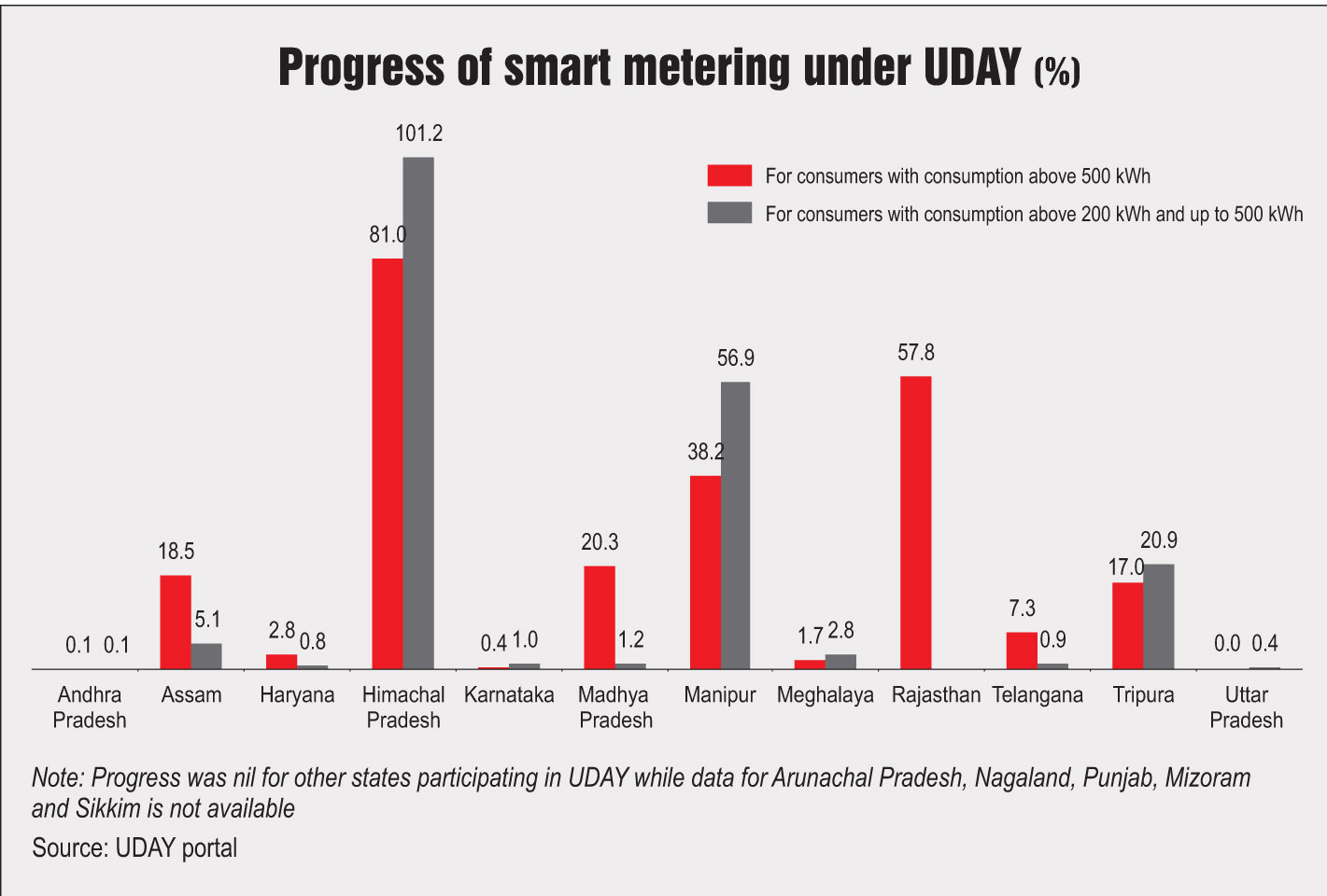 With respect to cost recovery in the power distribution segment, the overall ACS-ARR gap has come down to Re 0.23 per unit in 2017-18 from around Re 0.60 per unit in 2015-16. A total of 17 states have witnessed a reduction in the ACS-ARR gap between 2016-17 and 2017-18. States including Rajasthan, Andhra Pradesh and Assam have recorded a significant reduction in the ACS-ARR gap. However, in around eight states, the gap has widened during this period. These include Chhattisgarh, Mizoram, Meghalaya and Jammu & Kashmir. Amongst all the states, Sikkim has recorded the highest ACS-ARR gap of Rs 5.65 per unit as of March 31, 2018. Meanwhile, Himachal Pradesh, Rajasthan Maharashtra, Gujarat and Puducherry have achieved the target of “zero” ACS-ARR gap. 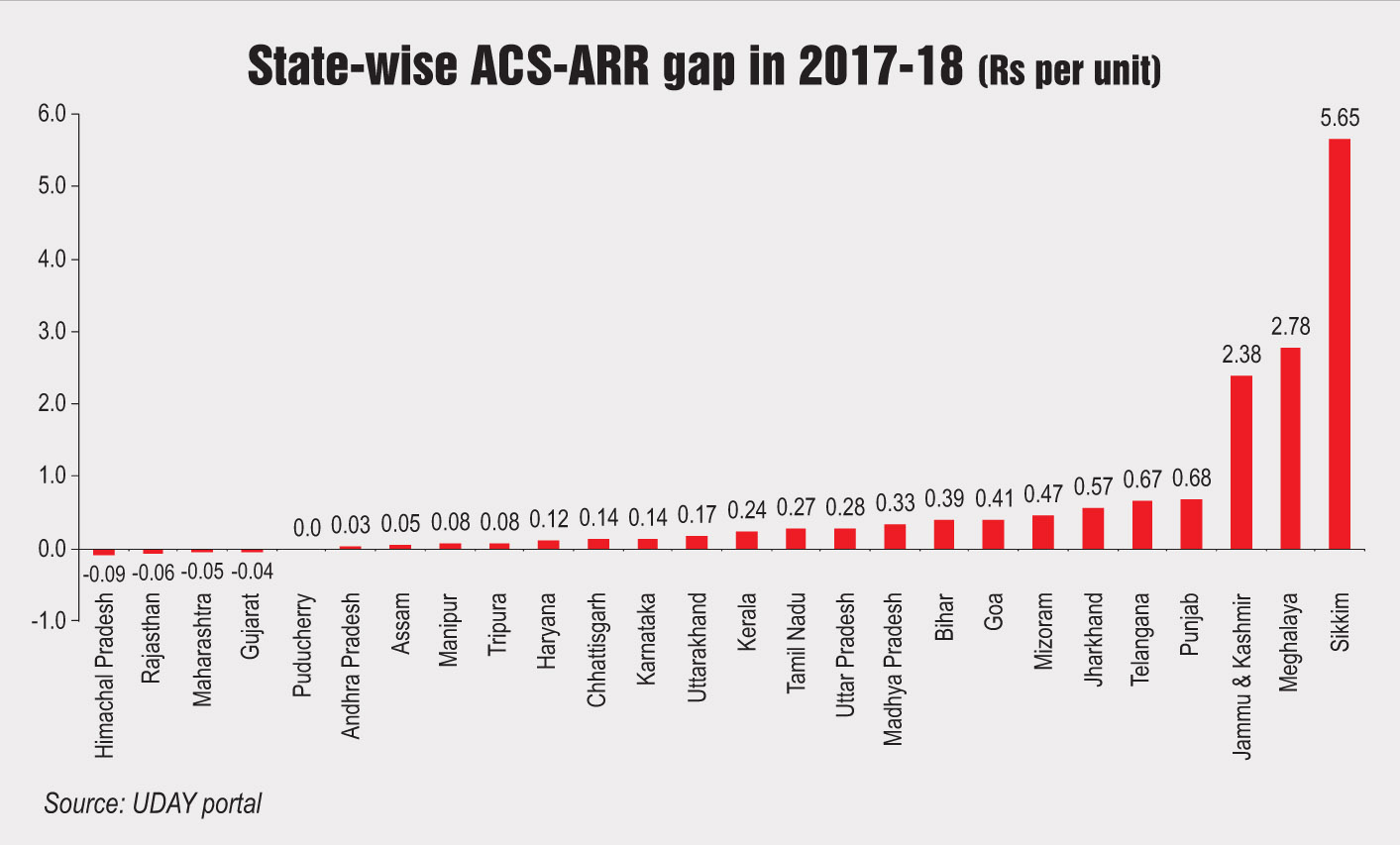 Through various measures such as the substitution of imported coal, coal linkage rationalisation, coal swapping and third-party coal sampling, the cost of coal-based power generation has reduced despite the increase in coal costs due to the hike in rail freight charges and clean energy cess.

In order to meet the targets set under UDAY, several states have taken their own initiatives to improve the health of discoms. These include Haryana’s Mhara Gaon Jagmag Gaon scheme, Rajasthan’s Mukhya Mantri Vidyut Sudhar Abhiyan, Manipur’s “Name and Shame” campaigns and prepaid metering, and spot billing in Haryana and Rajasthan. Rajasthan has also adopted the franchise route and awarded four circles to franchisees since 2016 in a bid to improve its operational performance.

The transfer and refinancing of over 86 per cent of the scheduled debt under UDAY has been a remarkable progress for the discoms, but has had an adverse impact on state finances. It has not only added to the fiscal deficit of the state, but has also not taken into account the future losses that might occur.

Sector experts are of the view that the scheme cannot resolve the distribution segment’s issues merely by the takeover and restructuring of debt. There is a need to reduce AT&C losses and bridge the ACS-ARR gap. Recognising this, the Ministry of Power (MoP) has given the loss-making discoms a strict March 2019 deadline to reduce their AT&C losses to 15 per cent. The MoP has issued a directive to these companies to restrain lending to discoms with heavy losses (above 15 per cent). The MoP has also shared a six-point roadmap with discoms for bringing down their losses. The suggested measures include prepaid and smart metering, feeder replacement, adoption of the franchise model and focus on lowering technical losses while controlling theft. The ministry has also indicated that appropriate amendments will be made to the Tariff Policy so that the regulators do not allow losses of over 15 per cent while determining tariffs after March 2019. Overall, UDAY has initiated a positive reform in the distribution segment. However, improvement in operational efficiency will be the key to achieving the desired results.