The operational performance of power utilities has improved over the past year. The sector has witnessed an increase in the plant load factors (PLFs) of thermal power plants (TPPs), as well as a decline in transmission losses and aggregate technical and commercial (AT&C) losses. The improvement in PLF can be attributed to a slow yet steady revival in electricity demand, while the reduction in transmission and distribution (T&D) losses is mainly a result of central government schemes such as the Integrated Power Development Scheme and the Deendayal Upadhyaya Gram Jyoti Yojana, aimed at strengthening the network infrastructure. However, there is significant scope for improvement in the sector, particularly in terms of AT&C losses, which are not yet in line with the targets specified under the Ujwal Discom Assurance Yojana (UDAY).

Of the 35 utilities tracked by Power Line Research for 2017-18, 18 reported an increase in PLF over the previous year. The highest PLFs were reported by Singareni Collieries Company Limited (SCCL), which operates the 1,200 MW Adilabad TPP at 91.09 per cent PLF in Telangana, and private major Sasan Power Limited, which runs the 3,960 MW Sasan ultra mega power project at 91.65 per cent PLF in Madhya Pradesh.

Among the central utilities, NTPC Limited recorded a PLF of 78.87 per cent in 2017-18, marginally higher than that in the previous year. NTPC’s best performing plant was the Talcher (old) thermal power station (TPS), which recorded a PLF of 93.82 per cent, whereas the lowest PLF was recorded by its Badarpur TPS at 25.21 per cent. The Damodar Valley Corporation recorded a significant increase of 6.33 percentage points in its PLF, from 48.86 per cent in 2016-17 to 55.19 per cent in 2017-18, whereas the PLF of the central PSU, NLC India Limited declined marginally from 73.68 per cent to 72.4 per cent.

At the state level, SCCL was the best performing utility with 91.09 per cent PLF in 2017-18, which is well above average state sector PLF and the national average. The Odisha Power Generation Corporation (OPGC) was the second best performing state utility with 77.2 per cent PLF, which is, however, 10 percentage points lower than the previous year’s figure. Meanwhile, the state gencos of Telangana, Chhattisgarh and Andhra Pradesh recorded PLF of over 70 per cent in 2017-18. Overall, the state utilities of Telangana, Chhattisgarh, Rajasthan, Tamil Nadu, Uttar Pradesh, Gujarat, Madhya Pradesh and Haryana as well as Tenughat Vidyut Nigam Limited and Durgapur Projects Limited recorded an increase in PLF during 2017-18. Meanwhile, the biggest drop in PLF was reported by Andhra Pradesh Power Development Company Limited, with the PLF declining by 27.58 percentage points from 62.82 to 35.24 per cent. The state gencos of Odisha, West Bengal, Maharashtra, Punjab, Bihar and Andhra Pradesh as well as Gujarat Mineral Development Corporation Limited also experienced a decline in PLFs during 2017-18 over the previous year.

In the private sector, the PLFs varied widely between 25 per cent and 91 per cent. CESC Limited, Tata Power, Essar Power Madhya Pradesh Limited, Sasan Power Limited and Rattan India Power witnessed an increase in PLF during the review period. The PLFs for all other private sector utilities registered a decline. The highest decline was seen in the case of Jindal India Thermal Power Limited, which recorded a PLF of 34.79 per cent as against 61.98 per cent in 2016-17. Essar Power Gujarat Limited’s and Adani Power Limited’s PLFs also declined significantly by 24 percentage points and 14 percentage points respectively. 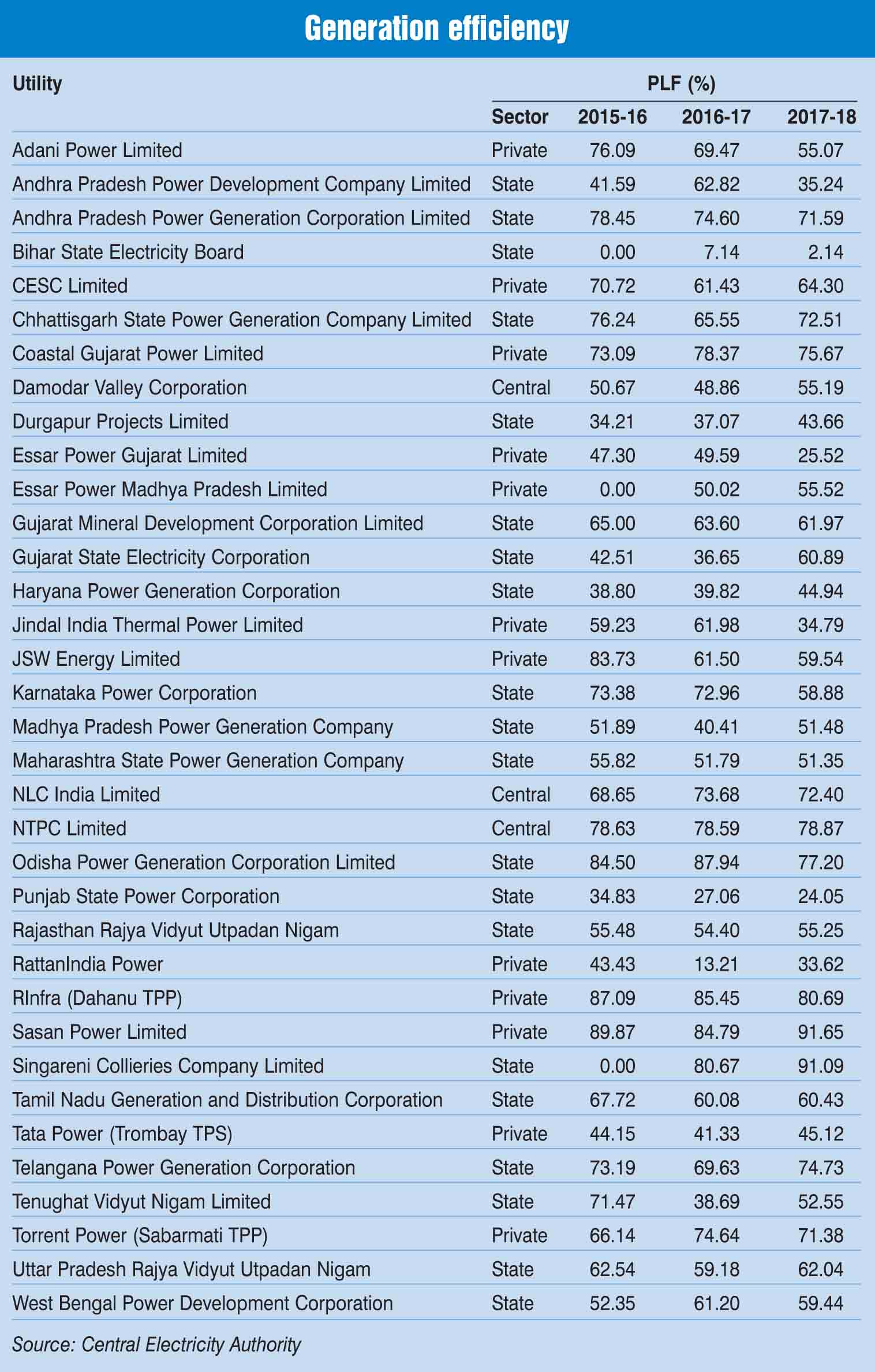 The majority of transcos reported losses in the range of 3-4 per cent including the utilities of Assam, Bihar, Gujarat, Jammu & Kashmir, Karnataka, Maharashtra, Odisha, Punjab, Rajasthan, Tamil Nadu, Andhra Pradesh, Telangana, Uttar Pradesh, Chhattisgarh and West Bengal. The transcos with the highest losses of more than 4 per cent were Meghalaya Power Transmission Corporation and Kerala State Electricity Board Limited. 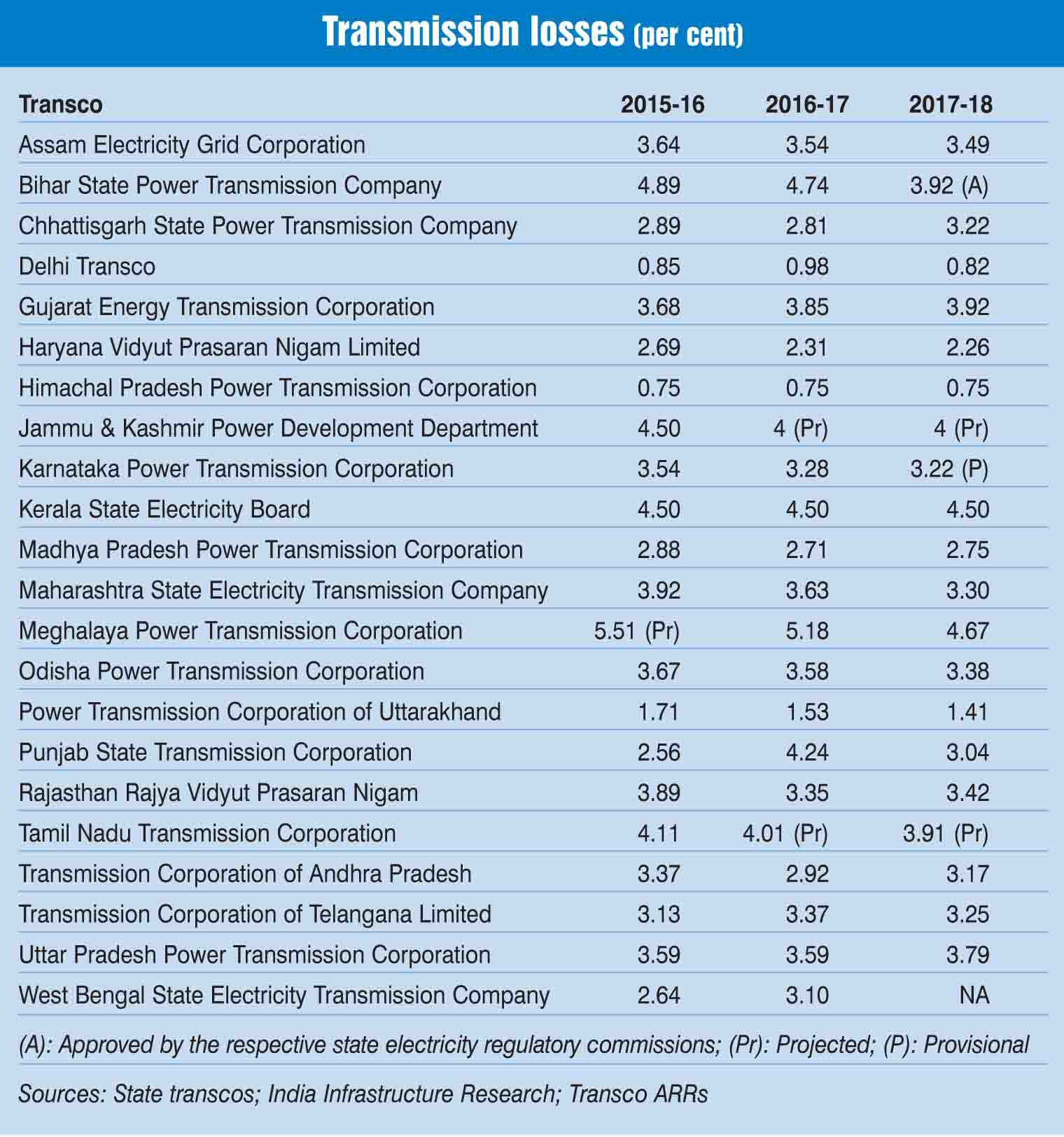 Among the state utilities, Himachal Pradesh State Electricity Board Limited (HPSEBL) was the best performer with AT&C losses of 3.41 per cent in 2017-18. The state utilities of Gujarat (excluding Paschim Gujarat Vij Company Limited) reported consistently low AT&C losses in the range of 7.7 per cent to 12.21 per cent during the three-year period from 2015-16 to 2017-18.

Meanwhile, private sector discoms and utilities have consistently reported low losses over the past couple of years. The private discoms in Delhi also reported an improvement in performance with Tata Power Delhi Distribution Limited recording AT&C losses of 8.4 per cent, BSES Rajdhani Power Limited at 9.4 per cent and BSES Yamuna Power Limited at 10.4 per cent for 2017-18. Among the private utilities, the best performer  was Tata Power Company Limited (Mumbai distribution) with a distribution loss of 0.75 per cent in 2017-18, 0.34 in 2016-17 and 1.02 in 2015-16. Other private utilities like Torrent Power Limited, India Power Corporation Limited and Reliance Infrastructure (Mumbai), now acquired by Adani Power, also performed well with  losses at 5.72 per cent, 3 per cent and 8.12 per cent, respectively.

During 2018-19 (as of June 2018), the lowest AT&C losses were recorded by HPSEBL at 4.33 per cent while the highest were recorded by the Jammu & Kashmir Power Development Department at 53.78 per cent. During the first six months of this fiscal, the best performing utilities with AT&C losses below 10 per cent were Dakshin Gujarat Vij Company Limited (7.53 per cent), Himachal Pradesh State Electricity Board Limited (4.33 per cent), and Chamundeshwari Electricity Supply Company Limited (6.66 per cent).

While utilities across the generation, transmission and distribution segments have recorded an improvement in their operational performance parameters, there is still a significant scope for improvement. The deployment of IT-OT technologies and the adoption of better renovation and modernisation and operations and maintenance practices can play a key role in improving the operational performance of utilities. Applications such as supervisory control and data acquisition, distribution automation and asset management can provide real-time updates about equipment health and notify when there is need for preventive or predictive maintenance. In addition, smart metering and regular energy audits can help curb commercial losses due to thefts and pilferage of electricity in the distribution system. Going forward, it has become imperative for utilities to improve PLFs and reduce T&D losses in order to stay competitive and provide best-in-class services to consumers.