With thermal power plants facing a demand crunch and discoms not signing any power purchase agreements (PPAs) beyond their baseload, the short-term power trading market has emerged as a necessary tool in recent years for sellers including merchant and stressed power plants.

In 2017-18, around 86.64 BUs of electricity trading was undertaken by trading licensees through bilateral transactions and power exchanges, an increase of 16 per cent over the previous year. In addition, a healthy compound annual growth rate (CAGR) of around 6 per cent was recorded during the period 2013-14 to 2017-18. In monetary terms, the size of this segment stood at Rs 304.27 billion, around 38 per cent higher than the previous year.

In 2017-18, the short-term market accounted for a share of about 11 per cent in the total power procured. The remaining 89 per cent power was procured by discoms through long-term contracts and short-term intra-state transactions. Overall, short-term volumes have grown by 7 per cent from 119.23 BUs in 2016-17 to 127.62 BUs in 2017-18. The growth was mainly contributed by the rise in power exchange volumes.

During 2017-18, an aggregate volume of 47.7 BUs was transacted on the two power exchanges in the day-ahead market (DAM) and term-ahead market (TAM) as compared to around 41 BUs in the previous year. Of the total volumes traded, the majority of 45 BUs was traded in the DAM while the remaining was in the TAM, that is, 11 days in advance.

Player-wise, 44.84 BUs of the total day-ahead volumes was traded on the country’s first and largest exchange, the Indian Energy Exchange (IEX). IEX’s trading volumes in the DAM market have grown at a CAGR of over 11 per cent since 2013-14. Meanwhile, 0.73 BUs in the DAM was traded on Power Exchange India Limited (PXIL).

Meanwhile, the price of electricity traded through the exchanges stood at Rs 3.45 per unit during 2017-18, as against Rs 2.50 per unit in the previous year. The month-wise trend shows that the prices at the power exchanges ranged from Rs 2 to Rs 4 per unit during 2017-18, crossing the Rs 4 per unit mark thrice (September, October and March at the IEX). In 2018-19, too, prices have been building up owing to peak demand in the summer season along with lower generation. In August 2018, the electricity trading price stood at around Rs 3.34 per unit on the IEX platform. 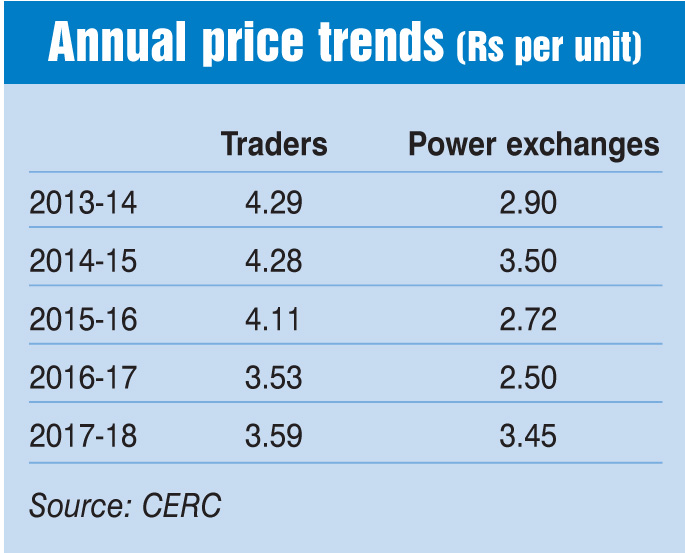 During 2017-18, about 38.94 BUs of electricity was transacted bilaterally through traders as against 33.5 BUs in 2016-17. Since 2013-14, volumes traded through licensees have recorded a CAGR of 3 per cent. As of March 2018, there were 36 registered interstate trading licensees, of which 28 were engaged in active trading during 2017-18. PTC India was the market leader in 2017-18, with a 38 per cent share in the total volumes transacted through traders. Other top traders in March were NTPC Vidyut Vyapar Nigam Limited (10.2 per cent share), Manikaran Power Limited (9.55 per cent), Mittal Processors (9.11 per cent) and Tata Power Trading (7.3 per cent).

In 2017-18, the weighted average price of electricity transacted through traders was Rs 3.59 per unit, compared to Rs 3.53 per kWh in 2016-17. Around 66 per cent of the volumes transacted during the year were priced at less than Rs 4 per unit. The major buyers of power through traders during 2017-18 were the discoms of Punjab, Telangana, Bihar, Maharashtra and Chhattisgarh.

Apart from discoms, a growing number of industrial consumers have turned to power exchanges owing to competitive prices. In 2017-18, over 4,800 open access consumers procured power through the two exchanges, as compared to around 4,357 consumers about five years ago.

Meanwhile, around 6 MUs of power was procured by 559 open access consumers at PXIL during 2017-18 at a price of Rs 2.79 per unit, as against a weighted average price of Rs 3.80 per unit for the electricity transacted at the exchange. These transactions were around 1 per cent of PXIL’s total volumes transacted. 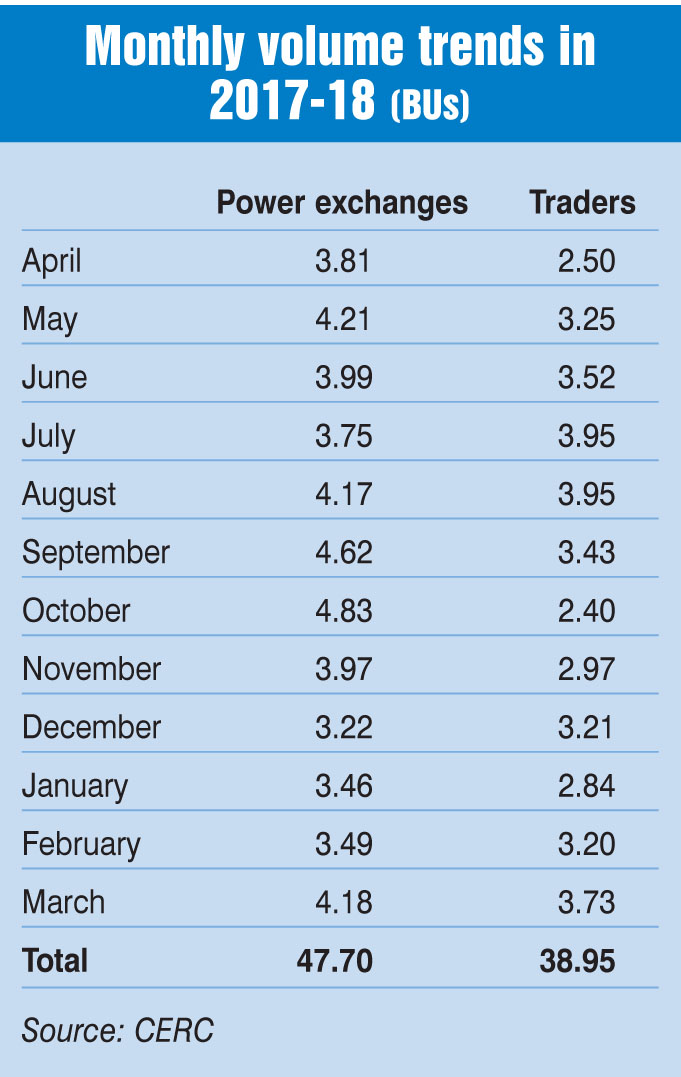 During 2017-18, 16.1 million renewable energy certificates (RECs) were transacted on the two power exchanges, a 59 per cent increase over the previous year. There were around 1,172 buyers and 1,600 sellers. The total market clearing volume was 15.9 million for non-solar RECs, of which 9.2 million RECs were traded at the IEX and the remaining 6.7 million at PXIL. The weighted average market clearing price for these RECs stood at Rs 1,483 per MWh. The total volume of solar RECs traded stood at 208,000 at a weighted average price of Rs 1,000 per MWh.

According to industry experts, short-term trading through power exchanges holds significant potential for future growth owing to changing discom requirements. With surplus power generation, many states are realising that long-term PPAs are not required beyond the baseload. Therefore, discoms are incrementally opting for the short-term market and have, hence, not signed any PPAs during the past five years. Banking on the synergies in the power exchange business, the IEX is also planning to introduce a spot gas exchange trading platform for trading of natural gas produced by marginal fields. For the electricity market, some of the new contracts that are planned to be introduced by the IEX are the forwards and futures markets, given the increasing liquidity in the power trading market.

Going ahead, improvement in the financial health of discoms under the Ujwal Discom Assurance Yojana, regulatory intervention for the reduction of cross-subsidy/additional surcharge (for open access users), and introduction of new-long term products on exchanges are expected to drive growth in the short-term market.