The hydropower sector in India has been witnessing a lull for the past few years. This is largely due to the lack of policy focus as well as inherent risks associated with hydroelectric project (HEP) construction. In 2017, the Ministry of Power (MoP) announced that it would come out with a new hydro policy to revive the segment and address the challenges faced by it. Things have moved slowly since then and the new policy is still in the offing. That said, the government and regulators are in recent times emphasising on the use of hydropower as peaking power rather than baseload. Recognising the changing role of hydropower is essential in the light of the increasing renewable energy penetration in the grid.

The installed large hydropower capacity (>25 MW) stood at 45,457 MW at the end of August 2018. This is 13 per cent of the country’s total installed capacity of 344,689 MW and only about 30 per cent of the total economically exploitable large hydro potential of 145,320 MW. The majority of the country’s hydropower potential is concentrated along the Himalayan range in the north and the Northeast. Given the difficult terrain, climatic uncertainties and a relatively low level of development in the remote regions, the private sector’s share in installed hydro capacity remains insignificant at 7 per cent.

Although the government launched programmes like the 50,000 MW Hydropower Initiative (2003) and the New Hydropower Policy, 2008, to harness the country’s hydropower potential, there has been little progress. Only about 11 GW has been added in the last 10 years (April 2007-March 2017) against the target of 26.5 GW. Hydropower capacity addition has fallen way behind thermal and renewable energy. As a result, the country’s hydro-thermal mix has deteriorated over the years, from 27:73 in 2007-08 to 16:84 at present, which is far below the optimum level of 40:60.

Inaccessible project locations, delays in environmental clearances, land acquisition and rehabilitation issues, and natural calamities result in significant cost and time overruns in hydroelectric projects (HEPs), leading to high tariffs and virtually no buyers for power. As a result, nearly 21 HEPs with over 6,000 MW of capacity are stalled, while work on 45 projects aggregating 25,000 MW has not yet started, despite the Central Electricity Authority’s (CEA) concurrence.

Policy: While there have been renewed discussions on getting hydro back on the policy agenda, the segment is yet to witness any major development. The idea of a new policy was mooted in March 2017, when the MoP prepared a scheme for the revival of the hydropower sector for approval by the Expenditure Finance Committee (EFC) of the Ministry of Finance. According to recent reports, the government is said to have shelved its plan to launch the eight-year scheme (worth Rs 16.7 billion) to support the faster commissioning of 40 hydropower projects totalling 11,639 MW between 2017-18 and 2021-22. The scheme had proposed to provide 4 per cent interest subvention during construction and three years post commercial operation to all hydro projects to be commissioned in the next five years, through the creation of a Hydro Power Development Fund.

That said, the government is intent on coming out with a hydropower policy (without financial implications) to boost the sector. The policy is expected to mandate a hydropower purchase obligation (HPO) on power discoms. Further, all hydropower projects may be categorised as renewable energy, allowing them to enjoy incentives currently restricted to small-hydro projects (SHPs) of less than 25 MW. The new policy is expected to suggest ways to bring down the capital costs of hydro projects and lower tariffs. For instance, it could remove restrictive clauses like the mandatory free power sales to states and provide soft loans for longer periods.

The sector has been eagerly awaiting the hydropower reforms. This was reinstated at the 8th biannual conference of ministers of power, new and renewable energy of states and union territories held on July 3, 2018, at Shimla, Himachal Pradesh. The host state pushed for policy action at the central level seeking grant of  renewable status to all hydro projects, introduction of HPO, waiver of interstate transmission costs, permission for compensatory afforestation on degraded forests for all hydro projects, streamlining of permitting procedures and introduction of long-duration loan instruments (35 years) by financial institutions. Meanwhile, the centre advised states not to load SHPs with local taxes and levies, which make the project unviable and increase the tariff.

At the state level, a positive development is the Supreme Court’s August 2018 judgment allowing the construction of stalled hydropower projects in Uttarakhand. The apex court, however, directed the state government to ensure there are proper waste disposal sites before restarting construction. This was in response to the high court order in June 2018, imposing a stay on the construction of all HEPs in the state due to improper muck disposal by developers. This, in turn, was in line with the notification of the Ministry of Environment, Forest and Climate Change released in December 2012, prohibiting the development of HEPs in the Bhagirathi eco-sensitive zone, and the Supreme Court’s blanket ban on HEP construction following the flash floods in June 2013. Currently, there is 2.5 GW of capacity under construction in the state.

Regulatory: The black start capability of hydropower stations has been acknowledged to be strategic from the point of grid resiliency by regulators. With hydropower stations’ capability in fast ramping and their ability to respond much more quickly than thermal stations, pumped storage plants (PSPs) and pondage hydropower stations are proposed to be gainfully utilised for regulation services to meet the system requirements. In July 2018, the Central Electricity Regulatory Commission (CERC) approved the pilot project on hydro as a fast response ancillary service (FRAS). The FRAS from hydro stations can be used primarily for regulation service from hydro stations to handle sharp fluctuations and intermittency associated with renewable generation. While the pilot is recommended for the central sector hydro stations, the scope will be widened eventually.

Industry: Some industry and private sector players are considering the exit route, while others are looking for opportunities through the inorganic route.

Norwegian hydropower giant Statkraft, in September 2018, acquired the 100 MW Tidong hydropower project in Himachal Pradesh from NSL Tidong Power Generation Private Limited (promoted by Hyderabad-based Nuziveedu Seeds). The new owner hopes to complete the project, which is about 60 per cent complete, in two years. Statkraft has a presence in the Indian power sector since 2004, and operates (as a 49 per cent stakeholder) the 108 MW Malana and 192 MW Allain Duhangan projects in Himachal Pradesh.

In August 2018, GE Power India Limited closed down operations at its Maneja (Vadodara) hydropower equipment manufacturing plant in Gujarat. GE Power decided to shut down the plant, given the grim market situation wherein the company is experiencing more capacity than market volumes. 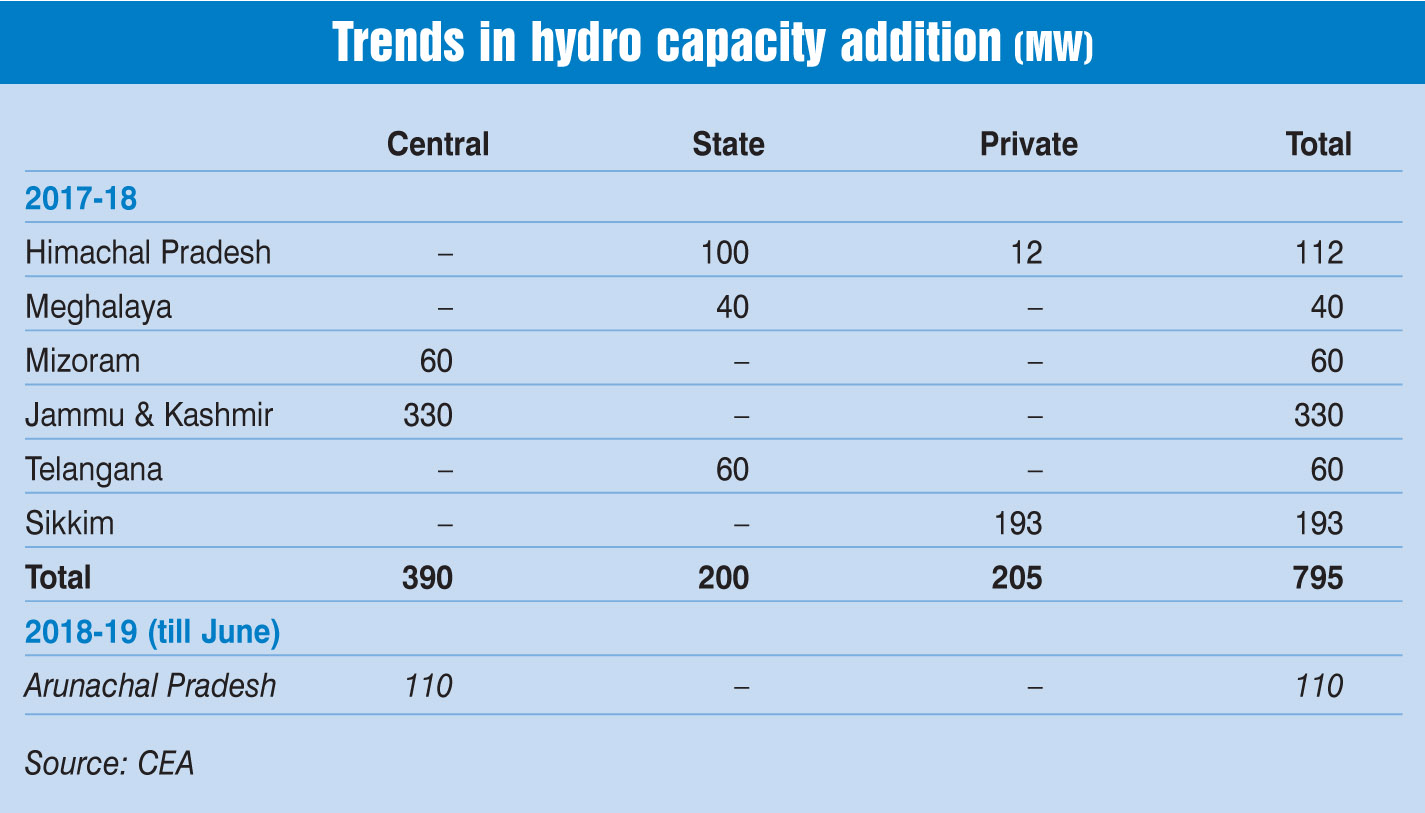 According to the CEA’s National Electricity Plan (NEP), the country’s hydro capacity addition target for the Twelfth Plan (April 2017-March 2022) and the subsequent five years has been set at 10,897 MW and 12 GW respectively. Given the past record, the plans are clearly ambitious.  Even if these targets are achieved, hydro’s share in the fuel mix will fall to about 10 per cent by 2027. The MoP considered two additional scenarios in its report on optimal energy mix in January 2018 – intended nationally determined contribution (INDC) and high hydro scenarios – which target 63,301 MW and 80,000 MW of hydro capacity respectively by 2027. This will result in hydro’s share to be slightly higher than the NEP scenarios at about 13 per cent, but almost the same as the current level.

Currently, 12.2 GW is under execution and another 5.7 GW is under survey and investigation (S&I). Of the hydro capacity under execution, 6.7 GW is in the central sector, while 3.1 GW and 2.4 GW are being developed by the private and state sectors respectively. The equipment for the majority of this capacity at 10.8 GW has been ordered. However, most of these projects are stranded at various stages of project development, leading to time and cost overruns. Of the 35 such projects, the 2 GW Subansiri Lower in Arunachal Pradesh, being developed by NHPC, is facing the maximum cost and time overruns of 150 months and Rs 123 billion respectively. Strong local opposition to the project has halted construction since 2011. Other projects with significant delays include the 1 GW Tehri pumped storage plant (PSP) (130 months) in Uttarakhand, the 800 MW Parbati II (135 months), and 100 MW Uhl III (141 months) in Himachal Pradesh and the 400 MW Maheshwar plant in Madhya Pradesh (216 months).

Given the growing importance of PSPs, the CEA is undertaking a basin-wise review of the country’s PSP potential (estimated at 96,524 MW), which is expected to be completed in 2019. Currently, two PSPs are under construction including the Tehri PSP and the 80 MW Koyna Left Bank in Maharashtra expected to be commissioned in 2022-23. In addition, a dozen projects aggregating 9,430 MW are at various stages of planning, including S&I and preparation of detailed project reports. To make PSPs commercially viable, there is a need to implement differential tariff for peak hours.

Besides the domestic hydro projects, Indian developers are assisting in cross-border hydropower development in Nepal and Bhutan. Around 10 bilateral projects with a combined capacity of 10 GW are being developed in Bhutan, which are expected to be commissioned by 2025. Among the significant cross-border projects currently under way are SJVN Limited’s 900 MW Arun III HEP in Nepal and the 600 MW Kholongchhu HEP in Bhutan (in a joint venture mode with Bhutan’s Druk Green Power). Further, a consortium comprising the GMR Group and the Italian-Thai Development Project Company is developing the 300 MW Upper Karnali project and the 600 MW Upper Marsyangadi HEP in Nepal.

In recent years, hydropower has become less attractive for investors. Private players have found relatively less risky avenues of investment in solar and wind power, which have a shorter gestation period and require less capital investment, as well as better policy support. Future projections do not look too optimistic for the hydropower segment, as it is caught between policy uncertainty and investor reluctance. The long-pending comprehensive hydropower policy is the need of the hour to revive the sector and to ensure that at least the current share of hydro in the fuel mix is maintained (if not upped) in the medium to long term.