Nuclear power provides an ideal solution to India’s twin challenges of meeting a huge energy requirement and reducing its greenhouse gas emissions. Nuclear reactors can provide stable baseload power at optimum costs, which is not possible with variable renewable energy sources. Moreover, nuclear has an edge over conventional coal- and gas-based power owing to lower emissions and better fuel supply security. As part of India’s intended nationally determined contribution submitted at COP21 in Paris in December 2015, the country needs to reduce the emissions intensity of its GDP by 33-35 per cent from the 2005 level and increase its non-fossil fuel-based capacity (renewable and nuclear) to 40 per cent by 2030.

In line with this, the government has been taking steps to drive nuclear power capacity addition in the country. In 2017, the cabinet gave its approval for the construction of 10 units of indigenous pressurised heavy water reactors (PHWRs) aggregating 7,000 MW in 2017.  In addition, nuclear reactors totalling nearly 30 GW to be developed in collaboration with Russia, France and the US have received in-principle approval.

India’s commercial nuclear power programme was launched in 1969 with the operation of Units 1 and 2 (160 MW each) of the Tarapur Atomic Power Plant (TAPP) in Maharashtra by Nuclear Power Corporation of India Limited (NPCIL). Today, NPCIL is operating 22 reactors aggregating 6,780 MW that account for 1.96 per cent of the total installed capacity. 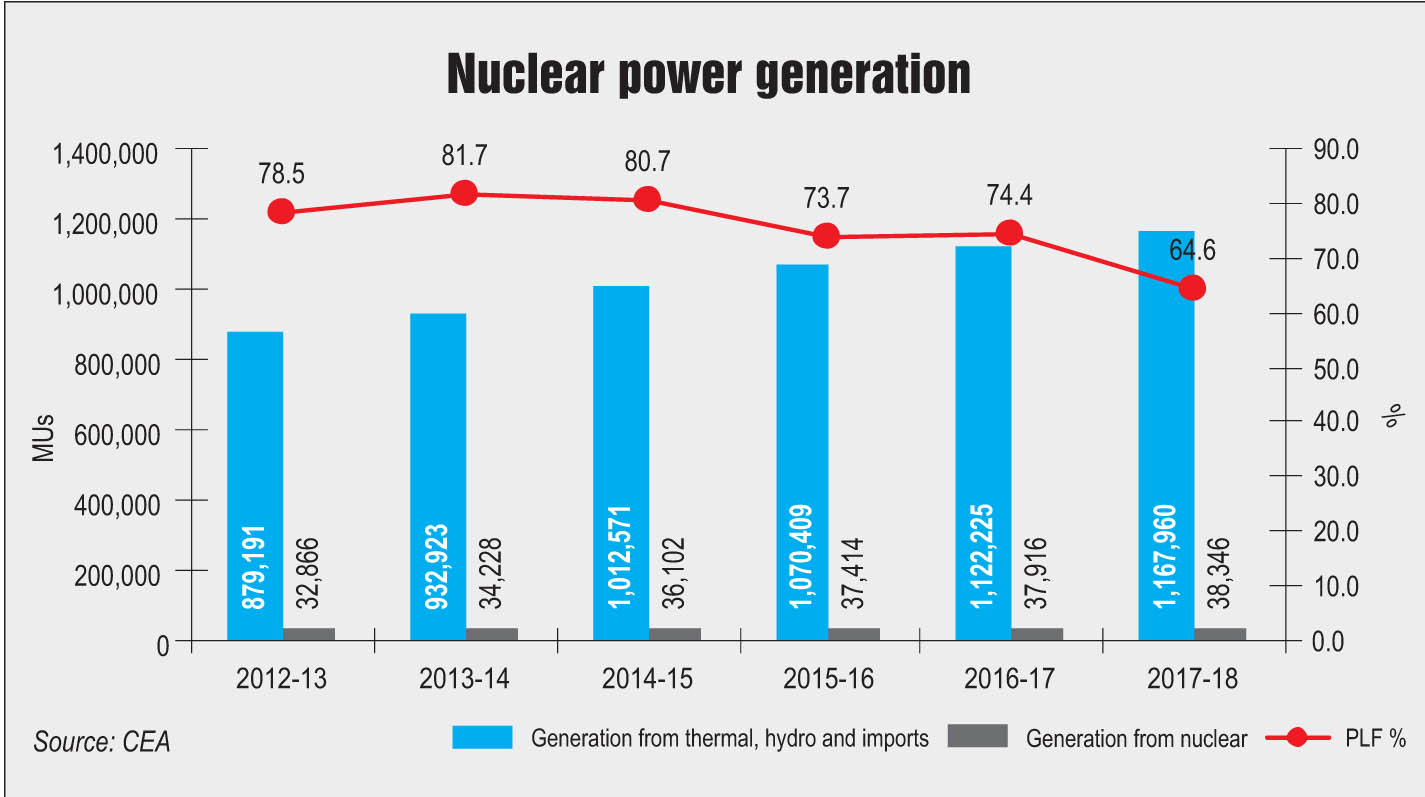 Further, the government gave administrative approval and financial sanction for 12 reactors in June 2017. These include 10 PHWRs of 700 MW each, which will be manufactured indigenously. These reactors will be installed at Kaiga in Karnataka (Units 5 and 6), Chutka in Madhya Pradesh (Units 1 and 2), Gorakhpur in Haryana (Units 3 and 4) and Mahi Banswara in Rajasthan (Units 1 to 4). The reactors entail an estimated investment of Rs 1,050 billion and are scheduled to be commissioned by 2031. In addition, KKNPS Units 5 and 6 have been approved by the government.

Also, several sites have received in-principle approval for setting up reactors in the future with foreign collaboration. These include Jaitapur (6×1,650 MW) in Maharashtra, which will be built in cooperation with France; Kovvada (6×1,208 MW) in Andhra Pradesh and Chhaya Miti Virdi (6×1,000 MW) in Gujarat in cooperation with the US; Haripur (6×1,000 MW) in West Bengal with Russia; and Bhimpur (4×700 MW) in Madhya Pradesh with indigenous PHWRs.

The key developments in the nuclear power space over the past year include foreign collaborations. In March 2018, NPCIL signed an industrial way forward agreement with Électricité de France S.A. (EDF) for a 9.6 GW nuclear power project in Jaitapur. As per the agreement, EDF will supply European pressurised reactor (EPR) technology and coordinate with industrial partners involved in building the project. In June 2018, GE and EDF signed a strategic cooperation agreement for the planned construction of six EPR reactors of 1,600 MW each at the Jaitapur site, in Maharashtra.

However, the proposed deal between NPCIL and the US-based Westinghouse Electric Company for the Kovadda nuclear power project has been held up as the former has filed for bankruptcy and is yet to come out of its legal troubles. The silver lining here is that the two countries, the US and India, are engaged in positive discussions to formulate a viable framework for the project and the US is actively advocating India’s proposal to be a part of the Nuclear Suppliers Group (NSG).

Another important development in the segment was the signing of a tripartite MoU between India, Russia and Bangladesh for cooperation in the construction of the Rooppur nuclear power project in Bangladesh marking India’s first atomic energy venture abroad. This is the first initiative under the India-Russia nuclear deal to undertake atomic energy projects in third countries. Indian companies can now undertake construction and installation works in the “non-critical” category for the Rooppur nuclear power plant in Bangladesh. India is not a member of the NSG and hence cannot participate directly in the construction of atomic power reactors. The project is likely to create an opportunity of $500 million to $1.2 billion for equipment suppliers.

Meanwhile, fuel supply negotiations between India and Australia progressed further. Reportedly, mining major BHP Bilton and Heathgate Resources, a partner of the US-based General Atomics, are close to signing a sales contract with the Department of Atomic Energy  for exporting uranium to India. Notably, in July 2017, Australia had sent its first uranium shipment to India as a sample for testing purposes. The sales contract, if finalised, will provide a significant boost to the country’s nuclear power programme as 13 of the 22 existing reactors can operate on imported uranium as they are under International Atomic Energy Agency (IAEA) safeguards.

The continued resistance of China to block India’s entry into the NSG, a body that controls nuclear technology trade, is a major impediment to India’s nuclear power ambitions. An NSG membership will provide a legal foundation for India’s nuclear regime and assure countries exporting nuclear technology to participate in nuclear projects in India. A meeting of the NSG is scheduled in December 2018 and India is striving to build consensus on the issue of its membership in the multilateral institution.

In India, nuclear power is facing opposition from local populations, environmentalists and non-governmental organisations owing to safety and environmental concerns, which has delayed several nuclear projects indefinitely. A case in point is the KKNPP, which was scheduled to be commissioned in 2007-08 but was delayed by eight to nine years. Another challenge is the declining cost competitiveness of nuclear power vis-à-vis other energy sources. As per the IAEA’s report “Energy, Electricity and Nuclear Power Estimates for the Period up to 2050” released in September 2018, the decline in natural gas prices, the impact of renewables on the overall electricity prices, and amendments to national nuclear policies in several countries following the accident at Japan’s Fukushima Daiichi Nuclear Power Plant in 2011 will continue to hamper nuclear power’s growth prospects in the short term.

The progressive measures taken by the government to engage in discussions with major foreign players and fast-track approvals for new projects augur well for the industry. Further, the nuclear reactors in the country have not faced any major mishaps, thus building developer confidence in the Indian nuclear power programme. The increase in nuclear power capacity is also expected to provide a major boost to equipment suppliers, who are currently stressed owing to the shrinking thermal power project order pipeline. The proposed construction of 10 indigenous PHWRs is expected to result in a Rs 700 billlion opportunity for the domestic manufacturing industry.

Net, net, the ability of nuclear power to deliver clean baseload power and meet India’s climate change commitments will continue to drive the segment’s growth in the coming years.