The government’s continued focus on solar and wind capacity addition has led to a remarkable increase in renewables’ share in the country’s power mix. The share of renewables in the total generation mix rose from 4.04 per cent in 2016-17 to 8.6 per cent in 2017-18. This share, according to a recent report by global ratings agency Moody’s Investors Service, is expected to increase further to around 18 per cent by 2022. The report also states that the share of fossil fuel-based generation is expected to fall by at least 10-15 per cent by 2022. This transition has largely been driven by the government’s efforts to create an enabling renewable energy market, with the right policies and regulations. However, the realisation of the government’s plan has only been made possible by the quick adaptability and willingness of the industry.

India’s installed renewable energy capacity has reached 72.62 GW as of July 2018, which is about 21.02 per cent of the country’s total installed power capacity of 345.49 GW. Competitive bidding in the solar and wind segments, with mega auctions conducted by the central and state agencies, has led to a total transition in the market dynamics. The highly competitive tariffs offered by developers for both wind and solar have made them a feasible option for discoms. In contrast, fossil fuel prices are increasing with each passing day and this trend is likely to continue in the future.

However, recent delays and cancellations of solar and wind project tenders have become a cause for concern to the renewable industry. The first seven months of 2018-19 have seen only 1.8 GW of renewable power capacity addition, against the total target capacity of 15.8 GW for the entire year. This slump is mainly due to issues such as the lack of adequate transmission infrastructure, aggressive tariffs quoted by bidders and uncertainties regarding the imposition of safeguard duties. These dampeners are most likely to lead the sector to miss its capacity addition target in 2018-19 by a significant margin.

There have been a few positives to brighten the otherwise bleak picture. The Ministry of Power has just released the draft amendments to the Electricity Act, 2003, in which ample provisions for renewable energy development have been included to keep pace with the changing power mix of the country. Solar-wind hybrids have gained importance as a new area of opportunity with the release of the solar-wind hybrid policy by the Ministry of New and Renewable Energy (MNRE) in May 2018. A 2.5 GW mega auction has already been planned for such hybrid projects by the Solar Energy Corporation of India (SECI) and it has also released a proposal for a 160 MW solar-wind hybrid projects with energy storage. Another upcoming area of opportunity is offshore wind power, which has a massive potential in the country. The government has already finalised the policy and a tender for the first set of offshore projects is being prepared.

Though the country might not meet its target capacity, the outlook for the coming years seems positive, with some temporary bumps along the way. The MNRE has come up with a timeline that will be followed to float utility-scale solar tenders and conduct auctions. Going forward, if this turns out to be a success, the government can roll out similar timetables for wind and hybrid projects. This can provide greater visibility to the achievement of the government’s target of 175 GW of renewable energy set by 2022.

The solar capacity share in the total installed power base has grown from 3.98 per cent as of July 2017 to 6.66 per cent as of July 2018, with 23 GW of installed capacity. With an about 10 GW project pipeline (tendered and pending auction) as of March 2018 as per industry reports, and the first quarter of 2018-19 witnessing new solar tenders for 14-15 GW, this trend is likely to continue.

Over the past two years, the solar tariff trend has become a major point of discussion in the solar development space. Historically, greater economies of scale, the entry of global players, the availability of foreign funding and a fall in the module prices have led to a rapid decline in solar tariffs. In fact, tariffs went as low as Rs 2.44 per kWh in May 2017 in SECI’s 500 MW auction for the Bhadla Phase IV project in Rajasthan.

On July 30, 2018, the Ministry of Finance (MoF) announced the levy of a 25 per cent safeguard duty on solar cells imported from China and Malaysia for the next two years. These duties were imposed to safeguard the interests of domestic manufacturing firms, which lag behind their foreign counterparts offering cheaper products. There was a round of discussions followed by stay orders by two state courts, which were finally overruled by the Supreme Court in September 2018.

The uncertainty regarding the safeguard duty on solar cells has left the segment in a state of flux. In addition, the sharp depreciation in the rupee cast a cloud over the Indian solar energy segment. This is a segment where the difference of just 1 paise can turn the tables resulting in winning or losing a project, and this sudden currency depreciation became a serious cause for concern. The items most vulnerable to exchange rate risks are the cells and modules that account for 50-55 per cent of the project cost. This new order, along with a depreciating currency, implied a negative impact on the estimated costs of the projects, with developers quoting higher tariffs for the projects.

Hence, the tariffs slowly started rising due to uncertainty about duties and non-availability of transmission, and went up to Rs 3.48 per kWh in July 2018 in the 1 GW auction by the UP New and Renewable Energy Development Agency. This tender was cancelled like many others citing higher tariffs, while a lot of projects are still facing delays in the signing of power purchase agreements. After the Orissa High Court’s stay on safeguard duties, the tariffs again dipped such that the 2 GW pan-India auction by SECI and 3 GW interstate transmission system auction, also by SECI, both saw the lowest tariff going down to Rs 2.44 per kWh again, indicating the private sector’s confidence in the sector. The Supreme Court has issued the final ruling to implement the duties, which might increase the tariffs to some extent. However, it comes with a pass-through option which might soften the impact to a large extent.

The impact of the transition to competitive bidding is yet to be seen in the wind segment in terms of capacity addition. Since the introduction of competitive bidding for wind projects in February 2017, SECI and state utilities in Tamil Nadu, Maharashtra and Gujarat have issued tenders for a total of about 9 GW of wind energy. Another 8-10 GW capacity is proposed to be awarded in 2018-19 and 10 GW in 2019-20 as per the MNRE’s trajectory announced in November 2017, to achieve the cumulative wind capacity target of 60 GW by 2021-22.

However, the past and present tenders have already started facing headwinds. Consequently, India managed to add only about 1,750 MW of new wind capacity in 2017-18, lagging behind a target of 4,000 MW set by the government. Though the country has a potential of adding about 8,000-10,000 MW annually, only a meagre 257 MW has been added in seven months since March 2018. The year 2018-19 might also see similar results, with hardly 2-2.5 GW of capacity addition. While this has increased the woes for wind turbine manufacturers and developers who are fighting for sustenance, it has also put a pause in the country’s plan to increase its wind capacity from the current 34 GW to 60 GW by 2022.

A 2,000 MW wind tender was cancelled by SECI in July 2018 as it failed to muster enough subscriptions due to transmission-related issues. The SECI Tranche V tender was then reissued with a lower capacity of 1,200 MW. In July 2018 itself, Gujarat Urja Vikas Nigam Limited (GUVNL) annulled its 500 MW wind tender, which was launched under Phase II of its wind programme. Shortage of transmission capacity could also have played a role in the cancellation of this tender.

Competitive bidding has brought in a period of transition for the entire wind industry. It has brought to light major issues, especially pertaining to transmission and uneven state-wise growth. But it may prove beneficial in the long run, as it has brought the key stakeholders like developers, discoms and the government to a point of discussion where a consensual decision has become essential to take the segment forward. Once they find a common ground, all the issues in terms of inadequate transmission capacity as well as uneven growth across the states will be resolved. 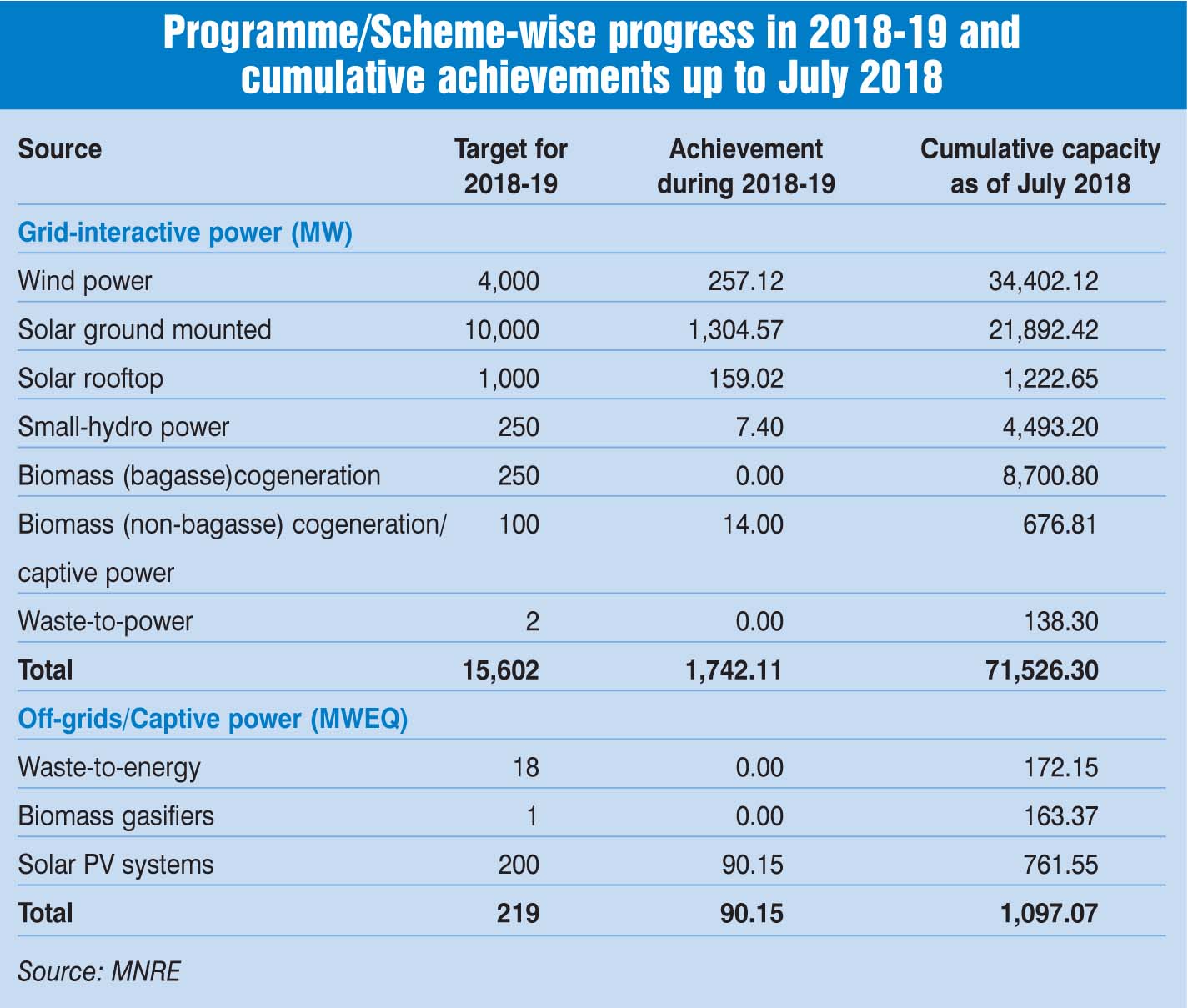 Neglect of bioenergy and small hydro

As of July 2018, the country’s total installed bioenergy capacity is small, only 9.85 GW, compared to the total available potential of 25 GW. Of this, biomass and cogeneration projects contribute 9.5 GW and waste-to-energy contributes the rest. In the past seven months, a meagre 14 MW of bioenergy projects have been set up against a target of 370 MW.

The bioenergy segment has long suffered from neglect due to greater preference being given to the solar and wind segments. The discovery of low tariffs with the advent of competitive bidding for both solar and wind has almost put a stop to the utilisation of this bio-resource. Since the government is more focused on solar and wind energy, no major policy initiatives have been taken in the bioenergy segment. This neglect, along with the challenges posed by the collection, storage and transportation of biomass and waste, has kept developers and investors at bay.

Like bioenergy, the small-hydro segment has also been suffering due to attention being diverted to the solar and wind segments. The small-hydro segment, hence, continues to lag behind with only 4.5 GW of installed capacity as of July 2018. Only 7.4 MW has been installed in the past seven months against a targeted capacity of 250 MW. It is quite likely that even this year the targets for this segment might not be met. With about 15 GW of potential to be harnessed from 6,474 sites, this indeed paints a gloomy picture for this segment.

Apart from the lack of government interventions, the need for huge investments, unpredictable rainfall and lower returns are also making developers reluctant to foray into this segment. These projects make more sense in remote mountainous locations, where entire villages can be electrified through a micro hydro project. The mountain state of Himachal Pradesh has made great efforts to utilise its small-hydro potential, while some hilly states like Uttarakhand and others still have a long way to go to harness their potential. Both these segments need urgent government intervention to revamp them, without which it is unlikely to achieve their capacity addition targets.

In spite of the numerous challenges plaguing the renewable energy sector, the future seems bright. It is true that the installation of 1.8 GW of capacity in 2018-19 compared to 12 GW of new renewable capacity addition in 2017-18 paints a rather gloomy picture for the entire sector. However, it is evident that even last year the capacity addition picked up only in the second half, a trend that might continue this year too.

While the success of solar and wind has been achieved in the backdrop of neglect of small hydro and bioenergy, government interventions in the form of clear policy directives can address these challenges in no time. New areas of opportunity like solar-wind hybrids and offshore wind can help in a better utilisation of resources and result in generation of far greater amounts of energy.

Lastly, energy storage technologies integrated with renewable energy can change the scenario in favour of renewable energy development. Owing to the rapidly declining costs of batteries, these can be integrated at any level of the electricity grid to achieve greater efficiencies. They can lead to the evolution of an all-new clean energy paradigm not only for renewables but for the entire power sector.