Power system and market reforms in India are essentially being driven by the large-scale integration of renewable energy into the grid. The country aims to achieve 175 GW of renewable energy capacity by 2022. The real-time availability of renewable energy (wind and solar) is weather dependent, uncertain and variable. Consequently, renewable generation can increase the ramp in the net load profile. The demand side is also undergoing changes with the growing adoption of distributed energy resources by end customers (for instance, rooftop solar, renewables connected at the distribution level), as well as the push to electric vehicles, which is expected to increase demand uncertainty. In this backdrop, there is a need to redesign the market to coordinate the demand and supply sides closer to real time.

The current framework manages real-time energy imbalances as well as system balances primarily through the deviation settlement mechanism (DSM) or ancillary services (AS), and partially through rescheduling (right to recall or reschedule four time blocks ahead) and intra-day market at the power exchanges (PXs). Clearly, as the name suggests, DSM is meant to handle last-mile system imbalances. Market players, both discoms and generators, began to use DSM as an avenue for real-time energy procurement and sale. The CERC is making efforts to discourage the use of DSM as a trading platform. In June 2018, the CERC proposed amendments to the DSM regulations, seeking to link the deviation price vector to a PX’s day-ahead market (DAM) clearing price, and proposing a mandatory deviation sign change once in every six time blocks and a consequent penalty in case of failure to meet the same. Meanwhile, the experience with AS, introduced in 2016 for managing grid frequency, shows that it is also being used to meet real-time energy needs. Therefore, there is a need to demarcate between energy trade and system imbalance handling. To achieve this, there is scope for introduction of an RTM in the window between the DAM (in the PX) as well as the DSM and AS mechanisms to match real-time demand and supply. 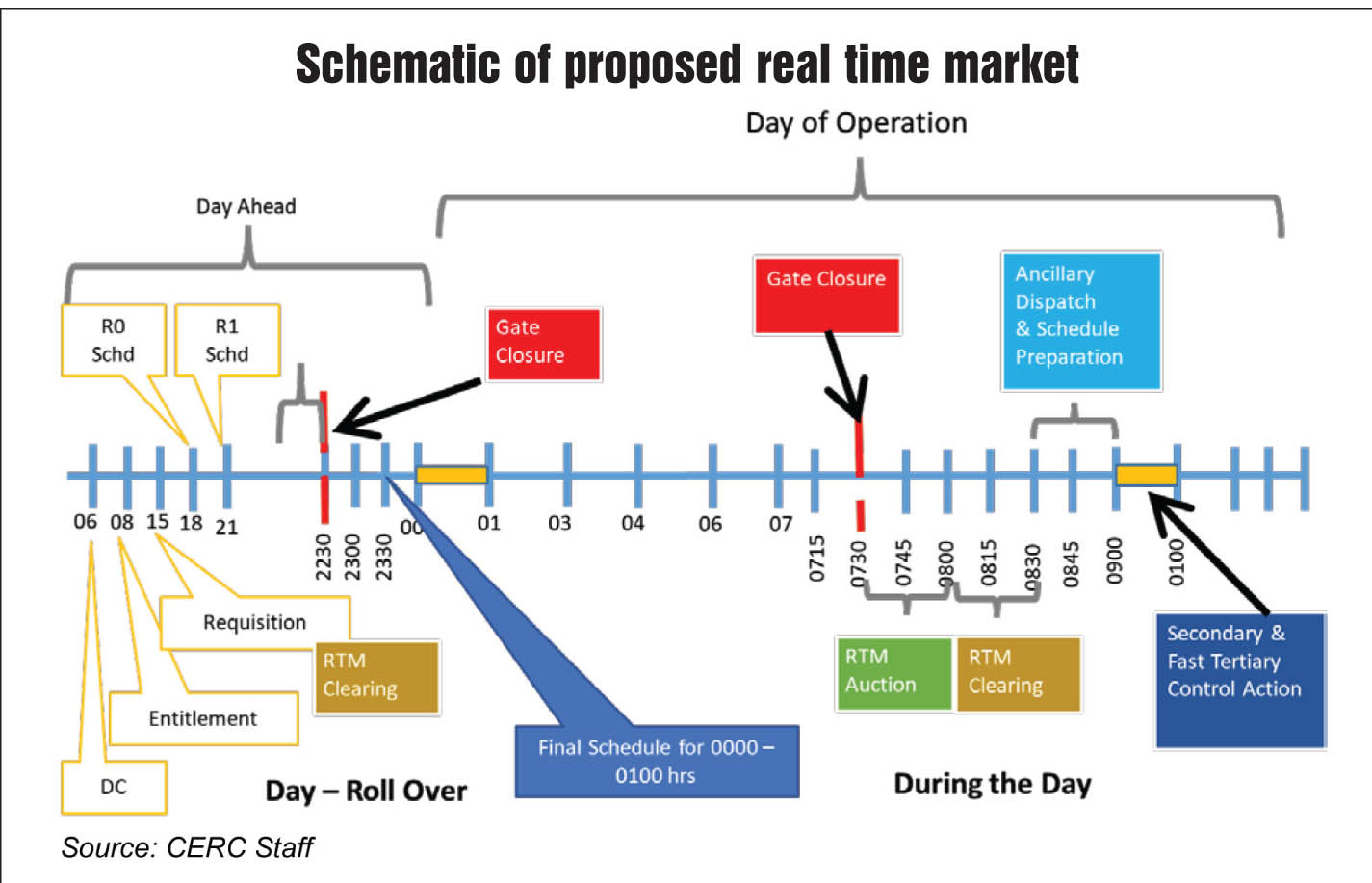 The paper details the international experience with two alternative market designs – an integrated market where the system operator centrally optimises the scheduling and despatch (followed in the US) and an exchange-based market where energy companies trade continuously at prices that clear the market (followed in Europe). The paper also considers the Forum of Regulators’ (FoR) deliberation on six market options for intra-day/hourly transactions, of which it recommends pool-based auctions for such trades. The key purpose of the RTM is to allow changes in generation and consumption schedules and accommodate the differences between day-ahead forecasts of system conditions and those observed in real time. Initially, the RTMs cleared on an hour-ahead basis. Advances in computational capabilities over time have enabled many markets to change to 15- or 5-minute-ahead RTMs.

In India, the existing intra-day markets in the PXs are region-specific 20-hourly, intra-day contracts for delivery on the same day.  The contracts are available for trading from 00:30 hours to 20:00 hours every day through the continuous trading process. The delivery period commences at 04:00 hours and ends at 23:00-24:00 hours as the difference between the trading end time and commencement of the delivery period has to be three hours. Thus, India has so far followed the European model of exchange-based market model, namely, continuous trade-based, pay-as-bid model as against the auction-based uniform pricing model. There is a rethink of the market design in Europe as well. The intra-day market in India needs to move to the next phase of reforms and adopt the auction-based uniform pricing model.

Under the proposed redesign of the intra-day market model, the markets would be based on double-sided closed auctions with uniform market clearing prices. The RTM would be conducted once every hour for delivery in four 15-minute blocks each hour. The energy trade for the first hour, 00:00 hours to 01:00 hours, of the day starts at 22:30 hours of the previous day and is repeated every hour thereafter. Such faster settlement requires automation, which was initiated through amendment to the regulations to implement the National Open Access Registry in August 2018.

For operationalising RTMs, the schedules finalised at the end of RTM clearing must be both financially and physically binding. For this, the concept of gate closure will be introduced. The discoms or traders as well as generators or traders will place their bids and offers in the RTM based on their demand and surplus capacity respectively. To ensure firmness of such bids and offers, the gate for schedule revision will close before the start of the auction. For instance, the gate for hourly trade for the first hour (00:00-01:00) closes at 22:30 hours of the previous day. After gate closure, the auction is conducted for the first hour delivery period. This process is continued every hour thereafter. The gap between gate closure and delivery period will be reduced gradually as automation of the process improves.

All day-ahead schedules are firm financial commitments whereby the supplier receives revenue from day-ahead schedules regardless of the real-time output and the buyer has to pay irrespective of its real-time consumption. Any shortfall or surplus from the day-ahead generation schedule will be rebalanced in the RTM. For instance, if a supplier is unable to meet the schedule in the DAM, it must purchase the shortfall to match the day-ahead commitment from the RTM at the real-time price. Similarly, if the discom consumes more than the day-ahead schedule, it must purchase the additional power in the RTM. In case of lower consumption than the schedule, the discom or load serving entity can sell the surplus power in the RTM. Alternatively, the generator can sell the surplus in the RTM. In this case, if the generator earns revenue over the regulated variable cost, the gain has to be shared equally with the beneficiary as per the Tariff Policy.

The RTM allows generators and discoms to correct their position in real time with financial commitment for each such transaction. Power System Operation Corporation of India must declare in advance the transmission corridor margin available for real-time transaction. Congestion management will be done as per the existing practice, including by way of market splitting. Failure to follow despatch instructions will attract charges under DSM, which eventually has to be indexed to RTM prices as the next step to link the DSM price vector to the DAM price.

The following are some of the advantages for the discoms:

The move to RTMs will facilitate better system operations and energy imbalance management. The timing of the launch is also apt in view of the massive intermittent renewable energy that is getting integrated into the system. Also, the introduction of 5-minute settlement will help in better administering the real-time segment. Net net, the suggested changes in the market design would be a step in the right direction.