Capacity addition by renewable energy sources continues to outpace that by conventional sources. In 2017-18, about 11,788 MW of renewable energy capacity was added against 9,505 MW by conventional sources including thermal, hydro and nuclear power. While the renewable energy sector has been receiving active policy support from the government to meet the ambitious 2022 target, the issues of lack of power procurement bids, declining plant load factors (PLFs), domestic coal supply shortage and a funding crunch continue to hamper growth in the conventional energy sector. The issue of stressed assets has emerged as the biggest area of concern in the last few months.

The country’s total installed capacity across all sources (including renewables) stood at 345.5 GW as of July 2018. Coal-based power continues to occupy a major share at 57 per cent, followed by renewables with 20.4 per cent. Hydro follows next with a share of over 13 per cent and the balance is accounted for by gas, diesel and nuclear power plants. Comparatively, in the previous year, coal had a share of 58.7 per cent while renewables held 17.5 per cent.

During 2017-18, about 8,710 MW of coal-based power capacity and 795 MW of hydro capacity was added. Meanwhile, renewable energy capacity addition stood at 11,788 MW, with solar contributing over 9,362 MW, wind about 1,766 MW, and biomass, biogas, small-hydro and waste-to-energy projects contributing the rest.

In 2018-19, only 110 MW of capacity has been added so far in the conventional power segment through the commissioning of North Eastern Electric Power Corporation Limited’s (NEEPCO) Pare HEP (Units 1 and 2) while 1,742 MW was added in the renewable energy segment till July 2018.

The PLF of coal-based power plants recorded a marginal increase to 60.52 per cent in 2017-18 from 59.57 per cent in 2016-17. During April-August 2018, the PLFs of coal-based plants stood at 60.5 per cent. However, owing to the lack of domestic gas supply, the PLF of gas-based stations remained sub-par at 22.8 per cent during the year, almost the same as the previous year. During the April-August 2018, the PLFs of gas-based plants increased marginally to 23.3 per cent.

The domestic coal supply situation has been constrained for the past few months and is expected to remain tight over the next two to three years till new mines are opened. In this context, the Ministry of Power (MoP) has written to the states asking them to import coal to tide over the shortage. NTPC Limited has already notified tenders for importing 2.5 million tonnes (mt) of coal. Overall coal imports increased to 208 mt in 2017-18 vis-à-vis 191 mt in 2016-17, recording a growth of 9 per cent. Imports during the April-June 2018 quarter were reported at 58 mt.

In January 2018, Coal India Limited (CIL) increased coal prices by almost 22 per cent. Earlier, in December 2017, CIL had announced the imposition of coal evacuation surcharge. CIL also announced its plan to implement a coal pricing mechanism based on the gross calorific value (GCV) of each coal consignment. This methodology will replace the mid-GCV-based pricing mechanism across coal grades and help resolve the long-standing differences over coal quality and grade slippage between CIL and power plant developers.

Under the Scheme for Harnessing and Allocating Koyla Transparently in India (SHAKTI), the Ministry of Coal’s standing linkage committee has recently recommended fresh coal linkages of 2.8 million tonnes per annum (mtpa) for 500 MW of capacity for NTPC Limited’s 720 MW Barauni thermal power plant (TPP) in Bihar. The TPP already has a coal supply agreement for 220 MW capacity. The standing committee has also recommended bridge linkages to a 500 MW unit at the Ukai TPP and an 800 MW unit at the Wanakbori TPP in Gujarat, which are owned and operated by Gujarat State Electricity Corporation Limited. Coal linkages aggregating 27.18 mtpa were awarded to 10 developers in the first auctions round under the scheme in September 2017. 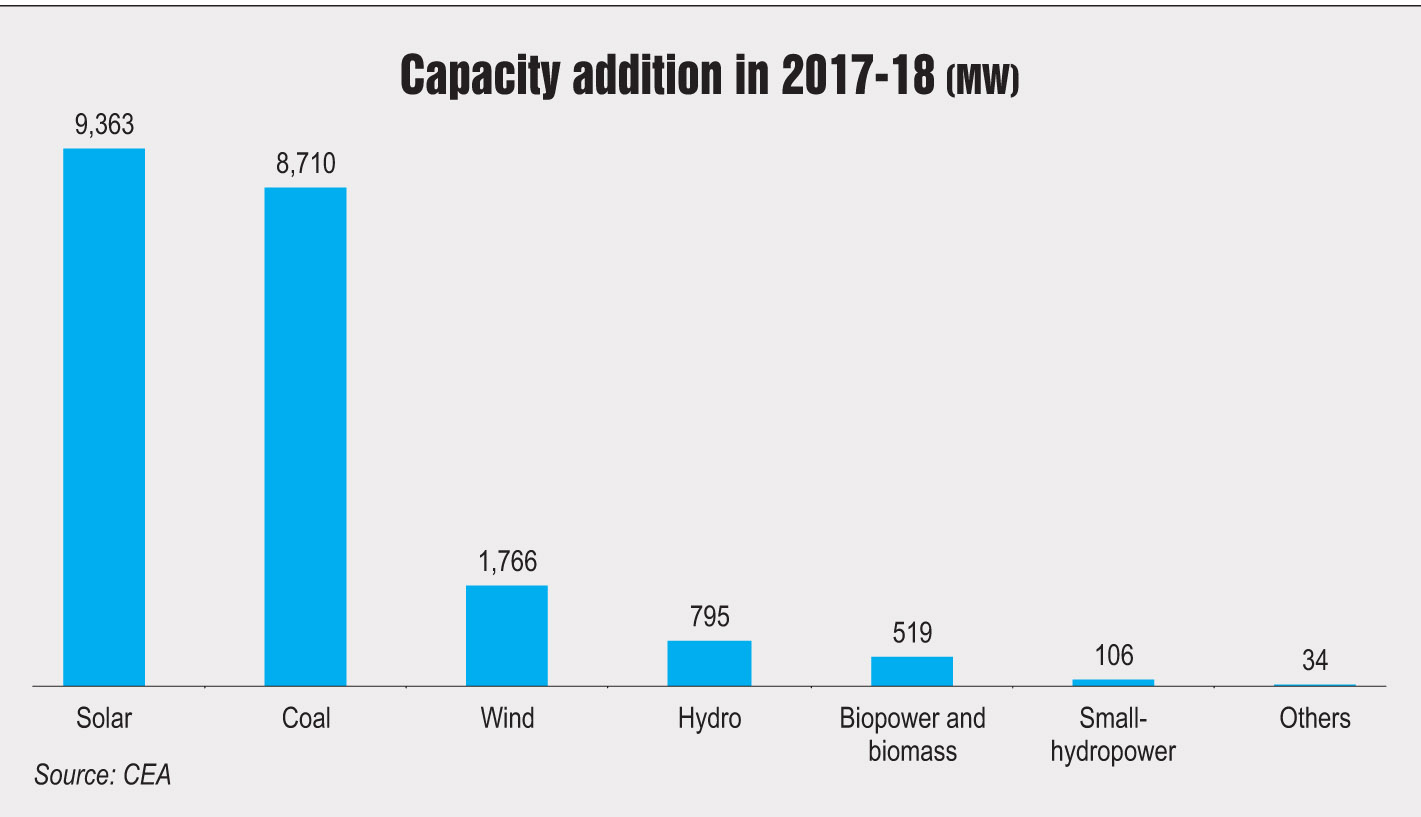 During the past year, the MoP undertook various policy initiatives to introduce flexibility in generation to accommodate the increasing integration of renewable energy into the grid. In June 2018, the MoP drafted a proposal for providing flexibility to a generation company to supply power from any of its TPPs against the schedule fixed for its plants, with the gains so realised being shared with the beneficiaries. Earlier, in April 2018, the ministry notified guidelines for flexibility in generation and scheduling of thermal power stations to reduce emissions, wherein flexibility has been given to a genco to supply renewable power against the schedule received for conventional power.

In a key positive for thermal power producers, the MoP clarified that investments in the installation of emission control technologies will be considered for pass-through in tariffs. TPPs can approach the appropriate commission for the approval of additional capital expenditure and compensation for the increased costs on account of this change-in-law event. Given the huge capex implications of this equipment installation for gencos, the move is in the right direction. As per the Central Electricity Authority’s flue gas desulphurisation (FGD) phasing plan, over 160 GW of coal-based capacity has to complete FGD installation by 2022. For TPPs in the National Capital Territory (NCT), the targeted completion date is December 2019. However, so far, FGDs have been commissioned for only 1.8 GW of capacity.

In April 2018, the MoP announced a pilot scheme to procure electricity from stranded projects without power purchase agreements (PPAs). Under this initiative, PTC India Limited initiated a scheme to procure 2,500 MW of power from such projects for a period of three years and sign back-to-back sale agreements with discoms for the same. PTC India has finalised bids for 1,900 MW of capacity at a tariff of Rs 4.24 per unit and PPAs are likely to be signed with developers by October 2018.

In December 2017, the MoP issued draft standard bidding documents (SBDs) and guidelines for ultra mega power projects (UMPPs) based on allocated coal linkages, in a bid to revive the UMPP programme. A key feature of the draft guidelines is reverting to the old build-own-operate model of project development. In addition, provisions have been added regarding alternative coal supply arrangements in case of a shortage.

Another important development on the UMPP front has been Reliance Power’s exit from the Tilaiya UMPP in Jharkhand. In May 2018, the company completed the process of divesting its entire holding in Jharkhand Integrated Power Limited, set up to develop the Tilaiya UMPP, to Jharkhand Urja Vikas Nigam Limited for Rs 1.13 billion. Meanwhile, some respite is expected for Tata Power’s Mundra UMPP as a high-powered committee set up by the Gujarat government has recommended a revision in PPAs to factor in the rise in Indonesian coal prices. The committee has recommended that the fuel pass-through can be revised after five years based on the coal price movement. Similar relief is expected for Adani Power’s 4,620 MW Mundra TPP and Essar Power’s 1,200 MW Salaya TPP in Gujarat.

Further, in order to arrest the trend of declining hydropower capacity addition, the MoP is working on a policy to revive the sector, though the details have not yet been finalised. The proposed policy would have provisions to ease financing to hydroelectric power stations (HEPs), scrapping the provision of free power to the states and promote offtake through a hydro purchase obligation. 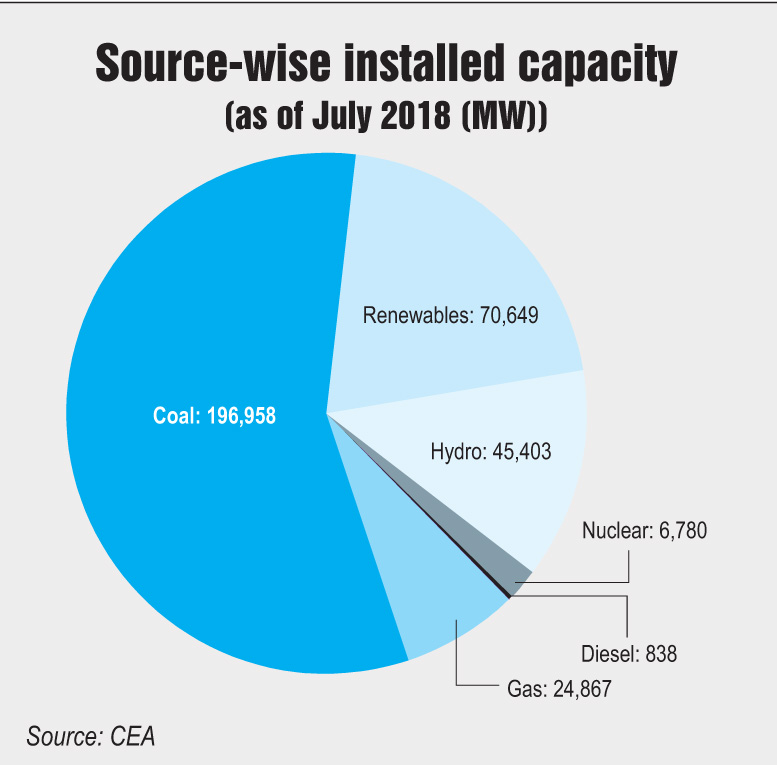 The non-resolution of the issue of stressed assets is the single largest concern of generators at present. The Allahabad High Court has refused interim relief beyond August 27, 2018 to private power companies against the RBI’s February circular on stressed assets, thereby mandating the initiation of insolvency proceedings by lenders against the defaulting projects of companies. However, the Supreme Court’s stay order on the high court’s judgment has provided a breather to the affected developers till November 14, 2018 when the Supreme Court is expected to hear the matter again.

A high-empowered committee has also been set up recently, which is expected to submit a framework for under-resolution, resolved and pending stressed assets by September 29, 2018. Reportedly, power sector assets worth Rs 670 billion will go to bankruptcy courts, while work on the resolution of projects worth Rs 750 billion is under way.

The problem of stressed assets arose owing to external factors beyond the control of project developers, such as regulatory delays, challenges in land acquisition and green clearances, and difficulties in dealing with financially weak state distribution companies. As per the recently released 37th report by the Parliamentary Standing Committee on Energy, the RBI guidelines will deepen the crisis of the electricity sector and a new framework needs to be put in place that provides a much-needed stimulus to sector growth. An early resolution of the generators’ issues is imperative, given that significant investments are at risk.