Uninterrupted electricity supply is key to industrial operations as every blackout affects production processes and ultimately results in revenue loss. Captive power plants (CPPs) set up by industrial and commercial consumers play a significant role in meeting their electricity needs and reducing their dependence on the grid. CPPs also help industries in optimising their energy costs, given the high industrial tariffs charged by the state discoms. It has been observed that as the industrial tariff crosses the limit of Rs 6 per unit, consumers tend to move towards open access or captive power. Power consumption from CPPs scores over power procurement through open access as the former is exempt from cross-subsidy surcharge (CSS), as per Section 42 of the Electricity Act, 2003. Electricity procured through open access is comparatively uncompetitive as it is subject to CSS, additional surcharge, wheeling and other charges.

Further, industries, especially metals, mining and cement, also look at setting up captive capacities as part of their vertical integration strategy to ensure energy security. Examples include Jindal Steel and Power, Vedanta, National Aluminium Company Limited (NALCO), ACC and UltraTech. Also, in recent years, owing to the lack of power procurement bids by discoms, developers are seeking to convert their independent power producer (IPP) plants to CPPs in order to ensure power offtake. A case in point is JSW Energy, which converted Unit 2 of the Ratnagiri thermal power plant in Karnataka to a group captive plant in the first quarter of 2018-19. Similarly, in January 2016, Vedanta converted three 600 MW units of its Jharsuguda IPP to CPPs to meet the power requirements of its alumina refinery. Power Line presents the recent trends and developments in the captive power space…

India Infrastructure Research tracked a captive capacity of nearly 68 GW across various industries. An analysis of the tracked capacity shows that coal continues to be the key fuel source for the majority of CPPs, with a share of over 56 per cent in the tracked capacity. This includes CPPs that use domestic coal, imported coal, and/or a blend of coal with coal washery rejects, petcoke and lignite. The relative abundance of the fuel as well as the competitive capital cost to set up large-scale coal-based CPPs augurs well for these CPPs.

Industries are increasingly looking at solar power-based captives to meet their power needs. This is owing to the improvement in the cost economics of renewable power plants with falling capital costs and favourable state and central government policies. Rooftop solar provides an attractive opportunity to industrial and commercial consumers such as transit systems, airports, hospitals, campuses, malls, industrial units and office complexes to reduce their dependence on the grid power and meet a part or whole of their captive energy needs through rooftop solar plants. The surplus power can be sold to the discoms or the deficit purchased from them.

An industry-wise analysis shows that metals and minerals have the maximum share in the tracked captive capacity. Some of the largest CPPs have been set up by the aluminium, copper, and iron and steel industries owing to their energy-intensive manufacturing processes. Some examples are Vedanta’s 1,125 MW coal-based CPP in Jharsuguda, NALCO’s 1,200 MW coal-based CPP in Angul, and Jindal Steel and Power Limited’s (JSPL) 810 MW Angul coal-based CPP.

In terms of a state-wise analysis, Gujarat leads the states with over 17 per cent of the tracked captive capacity. The coastal state hosts a large number of petrochemical companies (such as Indian Oil, Reliance Industries and the Essar Group) as well as textile industries (such as Aditya Birla Nuvo and Raymond), with CPPs based on gas and wind respectively, owing to a well-developed city gas distribution network and a high wind potential.

Odisha is another key state for captives where a number of metals and mining companies like Vedanta, NALCO, JSPL and Steel Authority of India Limited have set up large-sized CPPs, predominantly based on coal, to meet their needs.

In recent times, group CPPs are being preferred by industrial users to meet their electricity needs. These projects are set up by developers for the collective use of many industrial and commercial consumers. Group CPPs enable small and medium industries that do not have the required investment and experience in setting up and managing an individual CPP but need uninterrupted power for their business operations. High industrial tariffs and the presence of large industrial clusters in key states like Maharashtra and Gujarat are primary growth drivers for setting up group CPPs. These plants provide power at economical rates to industries and help them avoid purchasing high-cost power from distribution utilities. Renewable-based group CPPs also offer the benefit of meeting renewable purchase obligations (RPOs) and selling renewable energy certificates in the open market. The group CPP model, moreover, provides benefits of economies of scale and reduces the power purchase agreement risk by having multiple offtakers.

According to the Electricity Rules, 2005, a power project is considered “captive” if the consuming entity or entities consume at least 51 per cent of the power generated and own at least 26 per cent of the equity. However, the Ministry of Power (MoP) has proposed changes to these rules with respect to the shareholding structure of group CPPs. In May 2018, the MoP introduced draft amendments to the Electricity Rules, 2005, which are set to impact group CPPs, especially those based on renewable energy. The recent draft amendments seek to have stricter criteria and impose compliance rules, and will thus make a significant impact on the way CPPs are structured and operated. 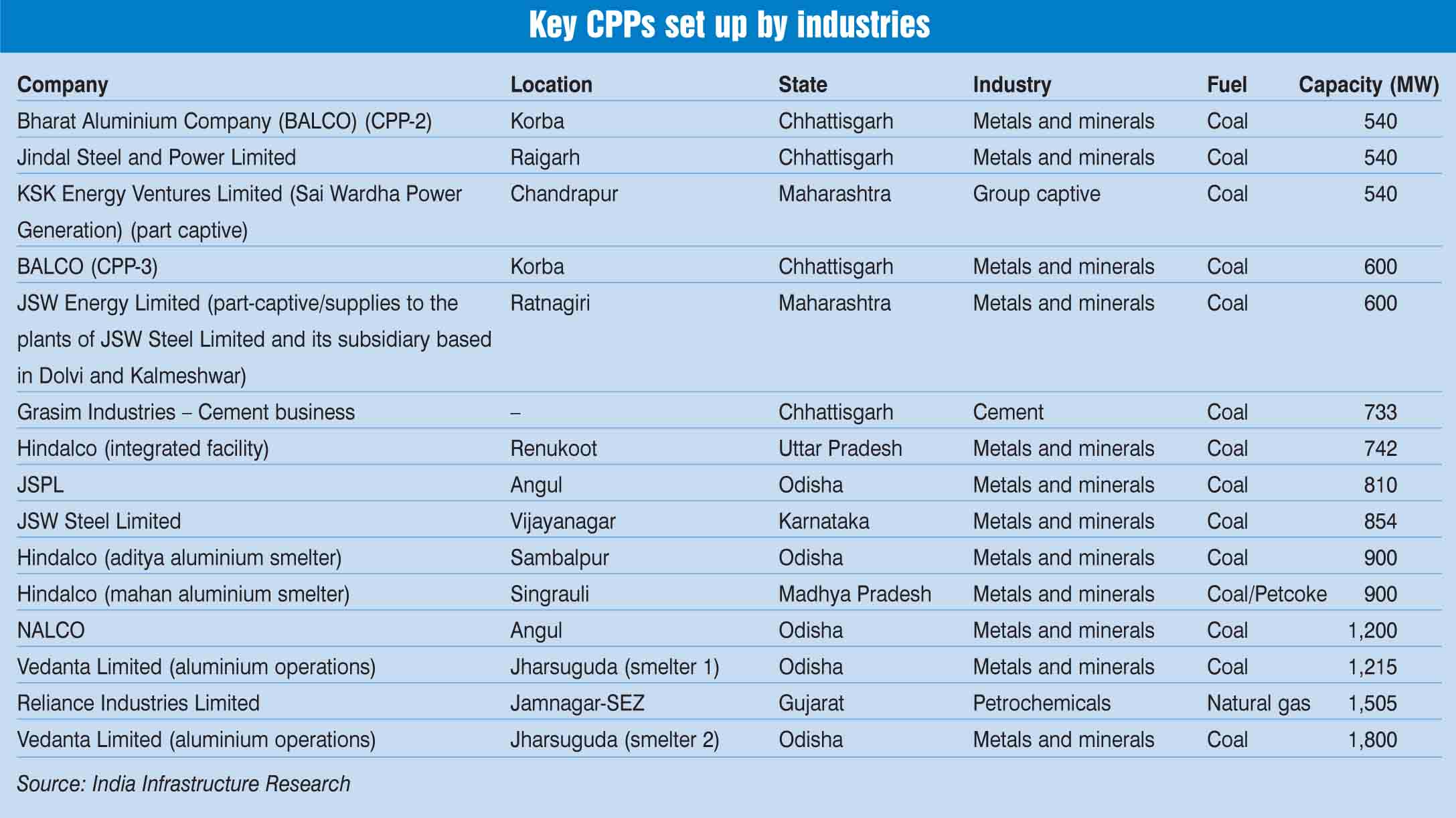 Apart from captive power, rental power solutions are gaining traction among industries that need power at short notice and for a short duration. Rental power solutions can also be used for continued operations in case of a failure of the main/existing power source, be it the grid or a CPP. Also, rental power can be used by industries to meet peak load demands for periods when power from the grid or the CPPs is insufficient.

Typically, rental power solution contracts include an initial security deposit and a monthly rental charge depending on the size of the power package. Buyers can negotiate long-term rental rates as they are relatively flexible, while short-term rates are generally high. The service provider does not supply fuel for the DG set and it has to be arranged by the customer/client. Installation and transport may or may not be provided by the service provider.

The lack of adequate fuel supply is a key concern for CPPs. Domestic coal shortages have returned and global coal prices are increasing, which is a double whammy for existing and upcoming coal-based CPPs. CPPs have already been receiving only half of their required coal quantities, and state utilities and IPPs are preferred over CPPs for priority coal allocation. Meanwhile, the availability of domestic gas continues to remain uncertain.

Recently, the Indian Captive Power Producers Association (ICPPA) requested the Prime Minister’s Office to take steps to address the issue of coal shortage. The association, which comprises members from various industries, sought support for the immediate resumption of coal supply to industries (particularly aluminium) to sustain operations as well as priority rake allocation for optimum coal materialisation at par with IPPs. The ICPPA also expressed concern on the difference in the price of coal supplied to IPPs and captive power producers.

The tightening of environmental norms is also a key concern as CPP operators will need to make additional investments in emission control technologies. In October 2017, the Supreme Court passed an order banning the use of pet coke and furnace oil in and around the National Capital Region with effect from November 1, 2017. The court has directed the state governments of Uttar Pradesh, Haryana and Rajasthan to ban the use of petcoke and furnace oil in industries within their state. The restriction was, however, relaxed in December 2017, enabling the use of petcoke for cement manufacturing (in kilns) and limestone industries, and for the use of furnace oil in power generation. However, pet coke use is not allowed in CPPs, which has impacted the energy cost of cement companies that typically blend it with coal for power generation.

The growth in the captive power market is directly related to industrial and economic growth. A healthy economic growth points to an increase in overall production and investments by industries to expand facilities and/or set up CPPs. Given that the near-to-medium growth forecasts for the Indian economy are positive (it is expected to grow at 7.3 per cent in 2018 and 7.4 per cent in 2019 vis-à-vis 6.7 per cent in 2017, as per the International Monetary Fund), industrial activity and captive power capacity are expected to increase.

Although grid power supply is increasing, power quality issues may remain in the short-to-medium term, especially with greater integration of renewables, thereby necessitating the use of CPPs. In addition, the falling price of various renewable energy technologies and growing RPO compliance are expected to drive the installation of solar power-based captives in the coming years.