Madhya Pradesh has been providing its residents with 24×7 power since 2013 – an achievement that can be credited largely to the state’s distribution companies. Madhya Pradesh Paschim Kshetra Vidyut Vitaran Company Limited (MPPKVVCL), which distributes power in the western part of the state, serves approximately 5 million customers, of which 1.5 million are urban, 1.3 million are agricultural and the rest are rural customers. In order to serve its large consumer base efficiently as well as to improve its operational performance, MPPKVVCL has taken several IT initiatives. One of the major initiatives by the utility is the development of open source enterprise-class consumer billing solution in-house. The new billing solution is faster and more accurate than its existing systems and has significantly helped the utility in increasing productivity. A look at the next-generation billing (NGB) technology adopted by MPPKVVCL…

The utility was working with two different types of billing applications. Under the Restructured Accelerated Power Development and Reforms Programme (R-APDRP), a seven-year old Oracle-based off-the shelf product was catering to the billing requirements of about 1.5 million urban consumers, while for the remaining consumers, the utility was using a 25-year-old Sybase-based software. However, it was facing issues with both the solutions. For instance, the hardware to support the Sybase system was not available in the market and the utility was on a sinking platform. The Sybase system provided neither a centralised database nor an integration functionality with e-payment and other servers. MPPKVVCL could not shift Sybase customer billing to the R-APDRP billing solution as the licensing cost for the latter was exorbitant. The licensing cost was Rs 1,500 million for the billing of 6 million consumers under the R-APDRP. Also, the user interface of R-APDRP’s billing solution was not user friendly. The system had major support costs related to facility management system and annual maintenance contract. There was a shortage of expert manpower to operate the R-APDRP billing solution as the product was bought off-the shelf. Owing to issues with the existing solutions, MPPKVVCL started looking for other off-the-shelf billing solutions available in the market, but each came with its own set of challenges. For instance, the standardised billing systems offered many services that were not required by the utility and multiple customisations were necessary. Further, re-customisation would have been necessary at every instance, whenever there was a change in government policy, tariff design or tariff structure, which would have been a costly and time-consuming affair. The solutions have high external vendor dependency as they need highly skilled operators for maintenance. These systems do not support knowledge transfer, leading to lower capacity building in the discom’s teams. Due to these challenges, MPPKVVCL decided to develop an in-house billing system.

The utility envisioned a cost-effective, secure, reliable and user-friendly billing system for itself. MPPKVVCL wanted to develop a system which would accommodate changes, and be easy to maintain and expand. The developed system needed to have controlled access at all levels for field officers and low dependence on external experts.

Further, a web-based centralised database with three-tier architecture based on open source technology had to be developed to ensure cost minimisation. The utility also laid emphasis on a clean and user-friendly interface, along with a modular approach to cater to new tariff designs and structures. In addition, the billing system had to provide virtual private network (VPN)-based access to field offices even in the absence of a dedicated network channel.

Development of the NGB solution

In January 2017, MPPKVVCL received approval from the board of directors to go ahead with the development of an in-house NGB solution. From February to March 2017, candidates were selected for the development of the NGB solution. In April 2017, a small team of 12 people  were selected to work on the project. Between April and July 2017, discussions on technology selection took place after deliberations with local IT companies and academia regarding the risks and feasibility of various technologies. Subsequently, training was imparted to the selected team through self- learning and knowledge sharing. Finally, a development plan was created incorporating the best practices of legacy systems along with the adoption of IT industry standards for work distribution and delegation.

During the period August 2017 to January 2018, the development of the billing engine was completed. The technologies deployed were Postgre SQL (10.5) (database), Angular open source by Google (frontend), Spring Boot framework (backend), BI tool Pentaho by Hitachi (reporting) and GIT (versioning). In February 2018, the user acceptance test was conducted by a team of 18 people from the field having knowledge of low tension (LT) billing. The system was successfully run parallel to the legacy system in a pilot location covering 60,000 consumers in the next month. Finally, on March 26, 2018, the NGB solution was officially inaugurated by the discom’s managing director.

Roadmap for the development of NGB

As of August 2018, the NGB system covers four circles with over a million consumers. Integration of the system with the Urban Jyoti Abhiyaan web portal, online payment portals, and SMS gateways has been completed. The complete migration of consumers to the new system is expected to be completed by March 2019. Meanwhile, the utility is also integrating the NGB system with the automated meter reading (AMR) system, email notification system and payment receipt system.

The initiative of photo meter reading (PMR) has partially been completed and is expected to be completed fully by December 2018. Further, out of 40,000 LT consumers, MPPKVVCL has installed AMR systems for 26,000 consumers. The utility plans to bring all the remaining LT consumers within the AMR ambit by December 2018. The utility also plans to have an email notification system for consumers by the end of this year. MPPKVVCL is also planning the integration of energy aware scheduling (EAS) with the NGB system by March 2019. Last but not the least, by end 2018, it plans to integrate the NGB system with the enterprise resource planning (ERP) system so that the entire financial and energy accounting can go hand in hand. 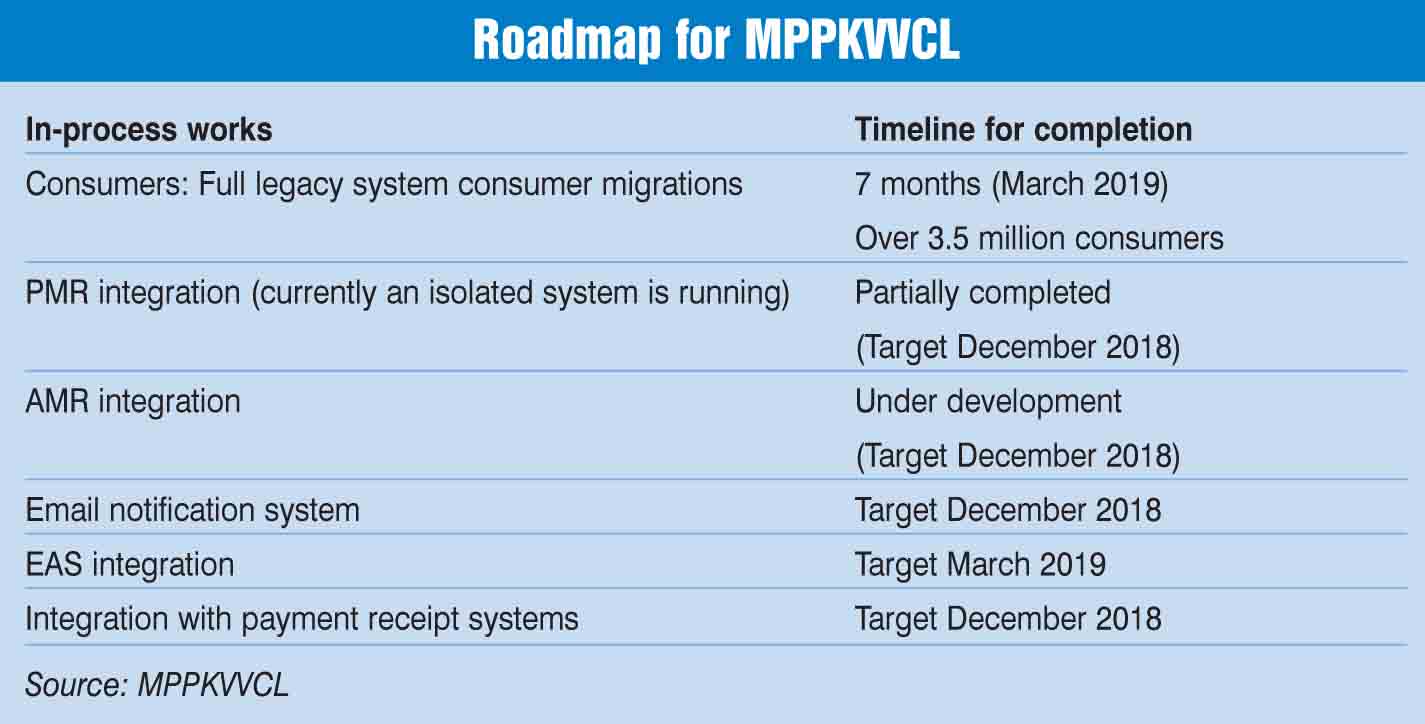 The NGB system has been processing bills three times faster than the system provided under the R-APDRP. It can process over 1,800 bills per minute. The in-house solution has given online access to all the field officers to access the system through a VPN. The user-friendly billing system has made operations easy within the discoms. Further, the system has been developed by ensuring its compatibility with the utility’s current operating systems, which has removed the need for purchasing and maintaining specialised equipment. The in-house billing system has been ensuring productivity by providing correct estimations of disconnections and enabling officials to have better control over business operations. The NGB solution has perfectly catered to the problem of high cost as it involves negligible annual maintenance costs, facility management services and annual technical support costs. Also, there are negligible new development, licensing and networking costs.

MPPKVVCL faced several challenges during the development of the NGB solution. One of the key concerns was controlling cost, which was achieved through the use of open source technologies. The solution has been developed at an investment of Rs 10 million vis-à-vis a cost of Rs 1,500 million for off-the-shelf solutions. In addition, arranging hardware for the development of NGB was a challenge. This was overcome by using the spare existing ERP hardware. Lack of expertise in technology selection was overcome by discussions with IT companies and academia. Other issues included the resource crunch and skill gap in in-house developers. Despite all of these, the discom has developed a model NGB solution that can be adopted by other state utilities to streamline their billing operations.

(Based on a presentation by Manoj Kumar Jhawar, Director Commercial, MPPKVVCL)