The government’s continued focus on solar and wind capacity addition has led to a remarkable increase in the share of renewables in the country’s power mix. India’s installed renewable energy capacity has crossed 72 GW and accounts for over 20 per cent of the total installed power capacity. However, the lack of adequate transmission infrastructure, aggressive tariff bids, uncertainties regarding the imposition of safeguard duties and the lack of financial resilience in companies remain key causes of concern for the sector. In the session “Plugging in Renewables: Cost Trends, Risk and Outlook” at the Power Line Summit 2018, senior government officials and industry experts discussed the progress in achieving the renewable energy targets, the challenges being faced and the outlook for the sector. The panellists included S.K. Soonee, Jatindra Nath Swain, Vipul Tuli, and Dr Rahul Walwalkar.

A summary of the panel discussion… 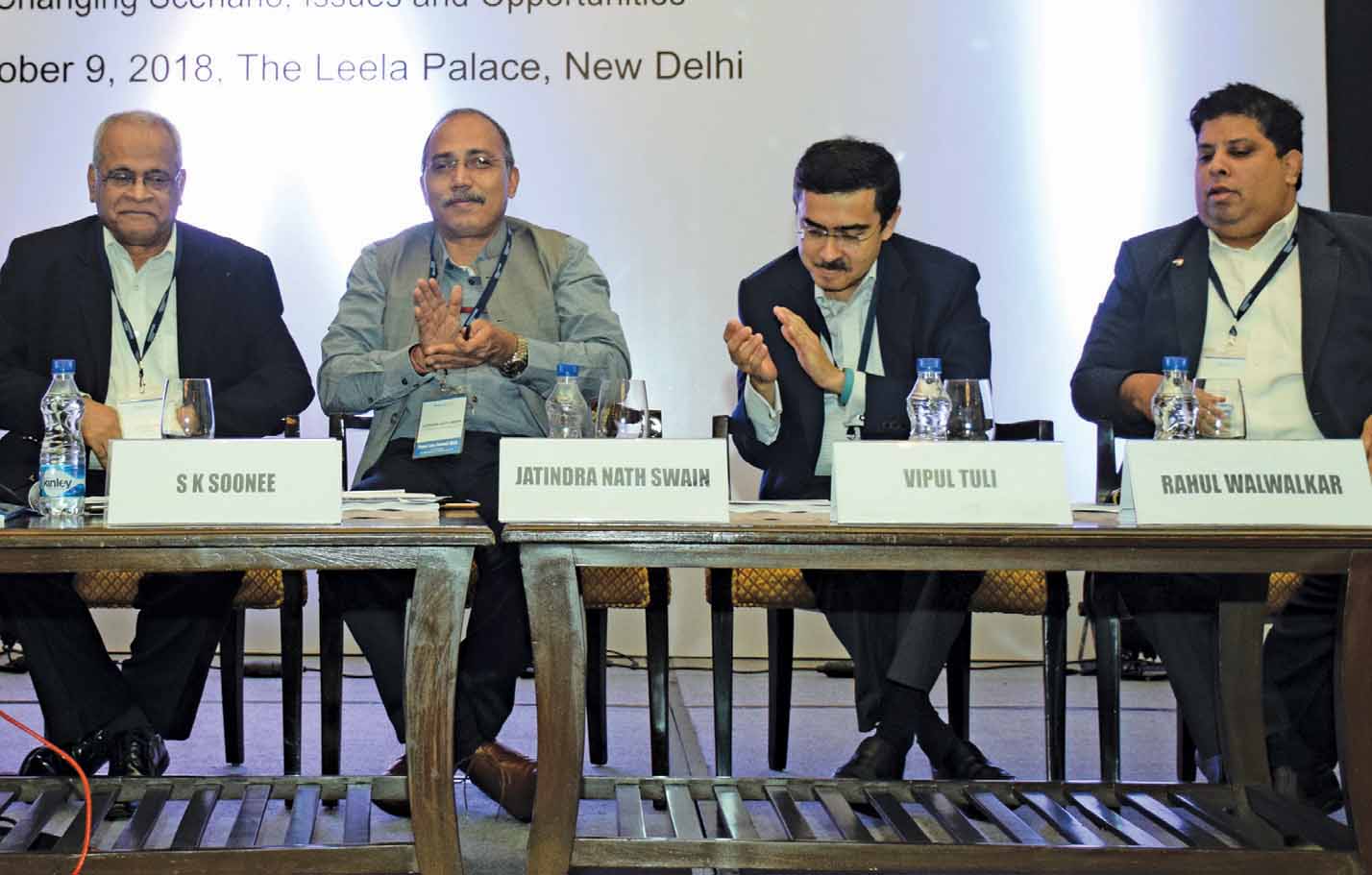 Towards the 175 GW target

When the target of 175 GW of renewable energy capacity was first announced, the plan was received with scepticism. At the same time, it was believed that unless the country aspires for something really big, it would be left with something small only. Today, it is agreed across the industry that there has been significant development towards the installation of renewable-based capacity, in terms of the success of the tenders issued and because projects that were expected to never come up, have been commissioned. Meanwhile, there has been a significant adoption of new technologies, that too, at an unprecedented scale and speed. Indigenisation, localisation and job creation have also been quite significant, especially in the wind segment.

However, a lot remains to be done. With a cumulative achievement of about 72.5 GW so far, about 100 GW more remains to be added to achieve the target, implying an addition of 25–30 GW of capacity every year till 2022. This requires much greater participation from the industry, going ahead.

Even before renewables came on to radar of the government, grid preparations had begun. The transmission segment has grown by four times in the past 10 years. India now has a synchronised grid that is capable of integration of the 175 GW target capacity, and even much beyond that. From the transmission segment’s point of view, the target is very do-able. However, the challenge to the grid could be in terms of lower capacity utilisation. For solar power plants, the utilisation levels are going to be less than 20 per cent, while the plant load factors of thermal power plants will be somewhere around 50 per cent and transmission utilisation will also be around one-third of the current level.

Various regulations relating to forecasting and scheduling, deviation settlement, ancillary services, etc. are in place and are aimed at facilitating the smooth integration of renewables. What is lacking, however, are standards. Soon, when there will be a critical mass of invertors connected to the grid, this could pose problems relating to fault ride-through or low-voltage ride-through.

With respect to load balancing, a number of technologies and techniques are available, be it pumped storage, flexibilising of thermal generators, storage, power trade with neighbouring countries, etc. On the generators’ side, primary and secondary control systems are being tested. Pilot projects are being undertaken at various power plants including Dadri, Himadri, Barh, Bongaigaon and Mauda.

As far as ancillary support is concerned, the country needs a fast ancillary services market. The scheduling time period needs to come down from 15 minutes to 5 minutes as 15 minutes can be a very long period with respect to solar. Work has been initiated to this end. Once complete, renewables are expected to be handled much better in the grid, and there would be more value on the importance of storage.

There has been a lot of concern around storage. Till some time back, the industry was not sure if storage technologies were ready, whether the price point was acceptable, whether the grid needed storage at all. Today, the thinking has converged and the need for storage is well accepted, especially with an official commitment for the launch of the National Energy Storage Mission by the central government.

The mission, expected to be launched before the end of the year, has identified the role of energy storage in four areas. These are the facilitation of renewable energy integration at the transmission level (with respect to ultra mega solar parks and wind farms), facilitation of the integration of renewables at the distribution level (particularly rooftop solar), the installation of campus microgrids, and the establishment of charging infrastructure to facilitate electric mobility. Further, with transmission becoming increasingly constrained, storage is expected to come in either as an ancillary service near substations or with the major generating player so that they can store and supply power.

The costs of various storage technologies have come down significantly across the world. However, in India, this has not happened because there has not been much implementation. There are a number of projects being undertaken now, including a 2 MW solar power project with a battery energy storage system at Kaza, Himachal Pradesh; a 7.5 MW project in Leh, Jammu & Kashmir; and a 10 MW solar and battery project in Lakshadweep.

Renewable tariffs have become quite attractive, which has enabled the contracting of the majority of the capacity. But now, it is important to look beyond tariffs, at reasonability, sustainability and predictability of returns over the long term; say, the next 50-100 years. Often, players have resorted to very aggressive bidding, which is not advisable in the environment that is prevailing right now with rising interest rates, depreciating rupee, payment delays by discoms and delays in the setting up of transmission infrastructure. There is a need to build an industry that has resilient companies, whose business model is such that they can last the lifetime of the projects and that have some cushion to be able to withstand shocks.

Further, transmission has become a constraint recently. There also exists a mismatch between the timing of transmission capacity addition and renewable capacity addition. While renewables have a very short gestation period, transmission projects take much longer. Further, transmission planning can only start after the renewable bids are closed in order to get an idea about the location of the new capacity. Hence, transmission companies need to be nimble and align with this demand, which would otherwise delay the implementation of renewable projects. Further, there is a limited set of six to seven players that participate in renewable energy tenders. Not many new players have been seen to participate in the bids. Participation by more players will be crucial in keeping the market competitive.

Notwithstanding these challenges, renewables have a huge role to play in future in view of the clean energy paradigm. While continuing to add capacity, it is now time to think of the next steps in terms of storage, electric vehicles and making investments in the segment sustainable.