Apart from being the largest source of electricity supply in the country, with over 75 per cent share in the total power generation, coal is also the largest contributor to industrial emissions. In India, the overall CO2 emissions increased by almost 40 per cent between 2011-12 and 2016-17, from around 638 million tonnes (mt) to 888 mt.

Reducing emissions from coal-based power plants can have significant benefits for the environment. In light of this, the Ministry of Environment, Forest and Climate Change (MoEFCC), in December 2015, came out with standards for the emission of sulphur oxide (SOx), nitrogen oxides (NOx) and mercury (Hg), and norms for the consumption of water by thermal power plants (TPPs). In addition, the standards for the emission of particulate matter were made more stringent. While the existing TPPs were required to adopt the revised standards by December 2017, the new plants (installed after January 2017) had to comply on commissioning.

However, several plants failed to comply with these norms due to various reasons including the limited experience with emission control technologies, long shutdown periods, space constraints in the installation of emission control technologies, high costs involved in meeting the standards and lack of clarity on the pass-through of the additional capital and operating costs required for complying with these norms.

The Central Electricity Authority (CEA) has now drawn up a revised plan for the installation of emission control technologies, based on which the MoEFCC has extended the deadline by five years and the power plants have been directed to meet the standards by 2022.

A look at the key emission control technologies, the challenges faced in their implementation and their impact on tariffs…

In December 2015, apart from tightening the existing standards for suspended particulate matter emissions, the ministry issued new standards pertaining to NOx, SOx and mercury, which did not exist earlier. Under these norms, TPPs have been classified into three categories – units installed before December 31, 2003, units installed after 2003 till December 31, 2016, and units installed after December 31, 2016. Different emission standards have been set for the three categories. For TPP units older than 2003, the norms are relatively relaxed as compared to plants commissioned thereafter as well as those under construction. Further, the SOx and mercury emission standards are more stringent for plants with a higher capacity (more than 500 MW).

In light of the growing water crisis, the MoEFCC has also specified water consumption norms for thermal power stations for the first time. As per the norms, all plants with once-through cooling are required to install cooling towers and achieve specific water consumption of 3.5 m3 per MWh and all existing cooling tower-based plants have to reduce their specific water consumption to a maximum of 3.5 m3 per MWh. For new plants (installed after January 1, 2017), the norms were revised further in June 2018. As opposed to an earlier cap of 2.5 m3 per MWh, the amended rules allow these plants to use up to 3 m3 per MWh of water. Further, the government notified measures in the amended Tariff Policy, 2016, wherein all TPPs located within a 50 km radius of a sewage treatment plant were mandated to use treated sewage water and the associated cost were allowed to be passed through in the tariff.

In a significant policy development, the government has recently issued a notification stating that investments in the installation of emission control technologies will be considered for tariff pass-through. The Ministry of Power (MoP) has identified that the MoEFCC’s notification requiring compliance with the environmental norms by TPPs issued in December 2015 is of the nature of a change in law event, thereby giving the right to power plants to approach the appropriate commission for the approval of additional capital expenditure and compensation for the same.

Further, in a case related to pollution in the Delhi-NCR region, the Supreme Court has accelerated the installation of flue gas desulphurisation (FGD) technology in the region to December 2019. The government has also directed central PSUs NTPC and the Damodar Valley Corporation to comply with the standards by 2021. 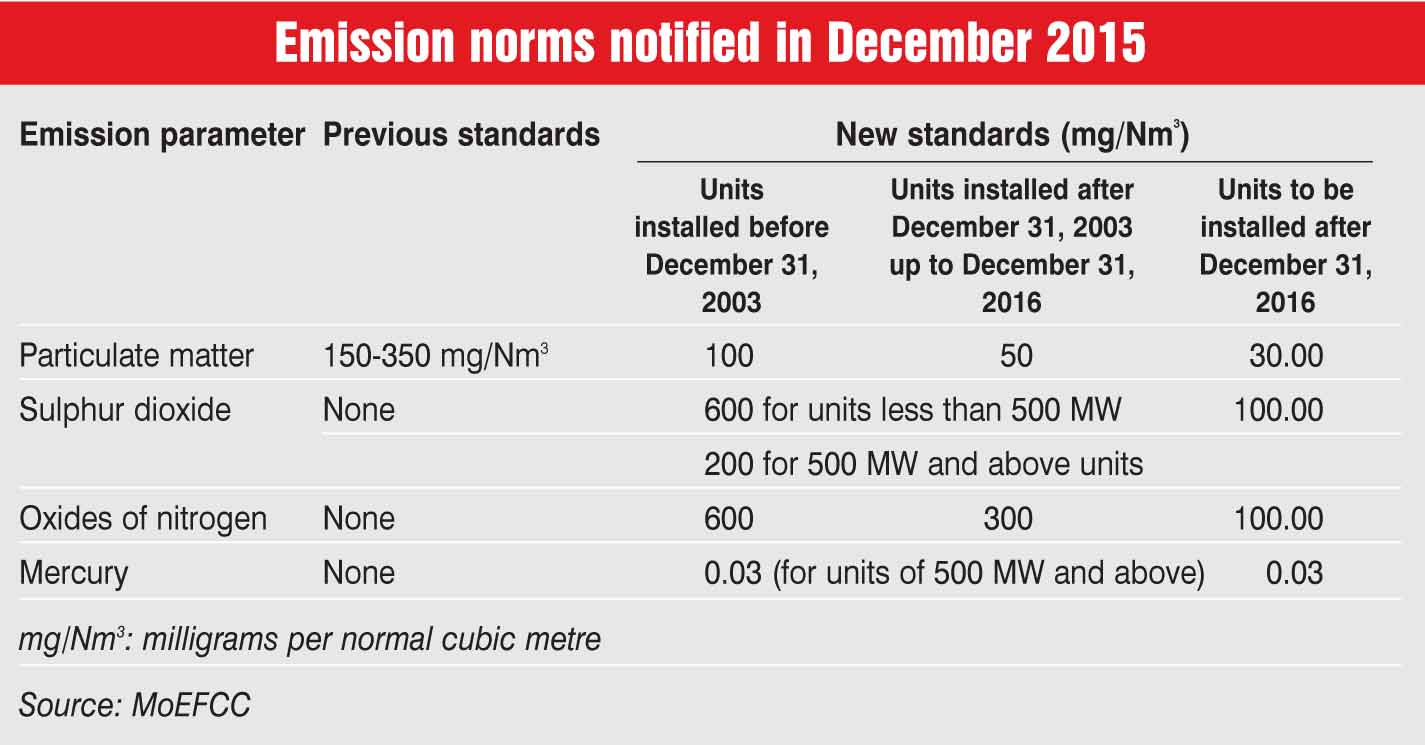 To meet the new SOx emission norms, plants are required to retrofit or install FGD technology, which helps remove SO2 from exhaust flue gases produced by coal-based power plants. FGD is a mature technology used globally for controlling SO2 emissions, and has proved to be effective for a wide range of coal qualities and operating conditions. Some techniques for removing SO2 from flue gas include wet FGD, semi-dry, dry FGD, seawater FGD, circulating dry scrubber and dry sorbent injection. The choice of FGD depends on various factors such as the scale of process, the location of the project, the sulphur content in the coal, and the availability and cost of reagents.

Electrostatic precipitators (ESPs) for particulate matter control also play an important role in controlling emissions from coal-based power plants. Most power plants in India have installed ESPs. However, concerns over their efficacy and operational performance mean that newer systems would be required for existing projects.

As per the implementation plan formulated by the CEA, FGD will be installed in plants aggregating about 161 GW and ESP retrofitting/upgradation will be done in plants totalling 65 GW of capacity. As of June 2018, only three units had completed the installation of FGD and nine had awarded the bids for its installation. Over 230 units had either already issued notice inviting tender, or finalised tender specifications, or had completed the feasibility studies and finalised the plans to install FGD.

The primary emission control measures for NOx mitigation include the installation of low NOx burners and use of ultra-low nitrogen content fuels. Low NOx burners help reduce NOx levels by lowering the flame temperature. NTPC Limited has recently upgraded its boilers to low NOx firing systems at its Dadri power plant in Uttar Pradesh. This is expected to reduce NOx generation by up to 40 per cent. The secondary emission control technology used in power plants to control NOx emissions includes selective catalytic reduction (SCR) and selective non-catalytic reduction (SNCR) techniques, which have the potential to reduce NOx emissions by more than 95 per cent. In new plants, a combination of both boiler modification and NOx abatement systems like SCR or SNCR may be needed. For new plants, installation of SCR in boilers has been mandated. To meet the water consumption norms, a changeover to closed cycle cooling water systems is required. This entails the installation of cooling towers. The plants will also be required to take water conservation measures to reduce water consumption. 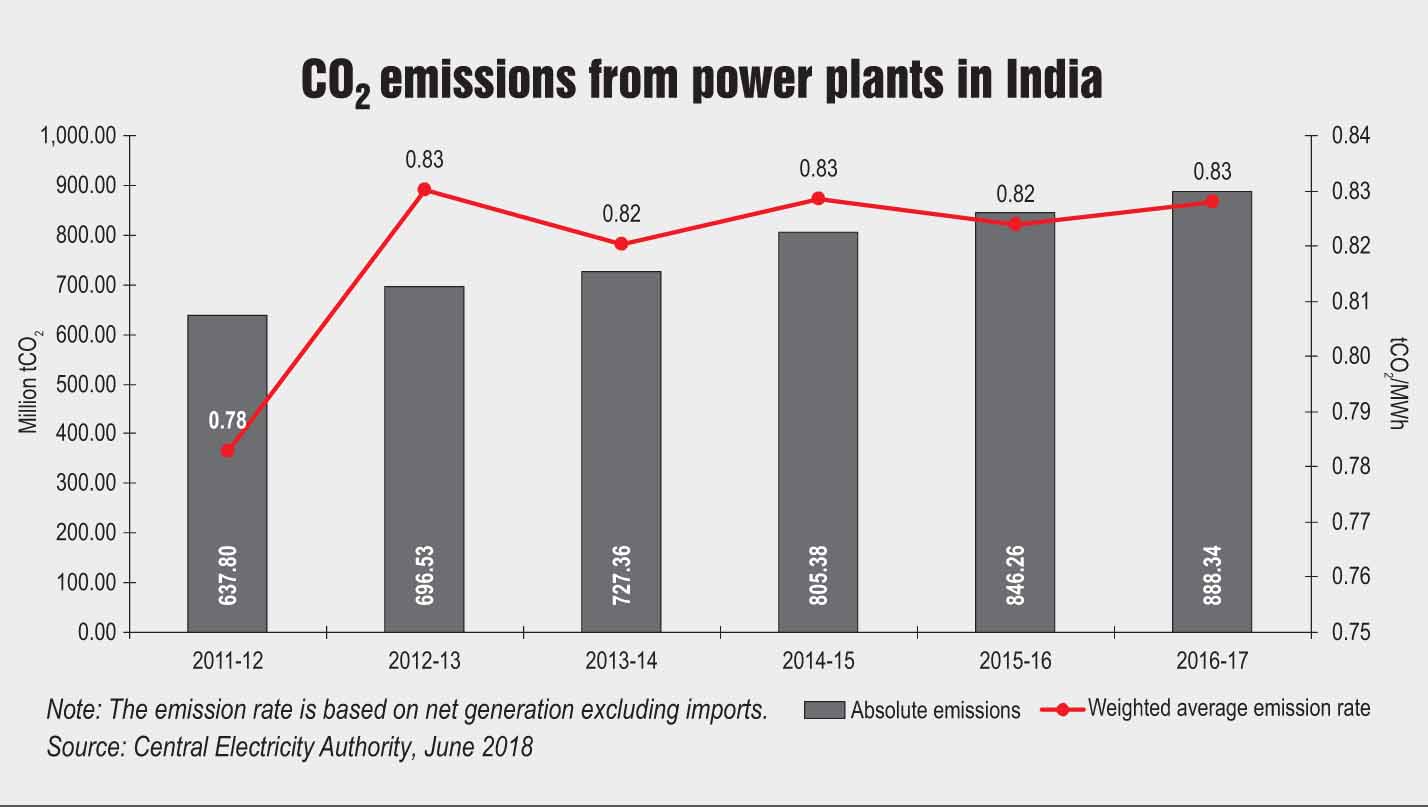 As per ICRA Limited, these technologies entail an investment of Rs 1 million-Rs 6 million per MW. Overall, the capital investment required for coal-based power plants to comply with the new environmental norms is expected to be in the range of Rs 7 million-Rs 10 million per MW. This is estimated to increase the levellised cost of generation for a coal-based power plant by Re 0.13-Re 0.22 per kWh, thereby increasing the power procurement cost for discoms.

The installation of pollution control technologies is expected to have a greater impact on the generation tariff of power plants operating at lower plant load factors (PLFs). According to a recent CSTEP-SHAKTI Foundation report, the base tariff for such plants (operating at a PLF of 50 per cent) without pollution control technologies is higher by Re 0.70-Re 0.97 per kWh depending on the age and capacity of the plant. With the introduction of these technologies, the difference in tariff is estimated to be in the range of Re 1-Rs 2 per kWh. Therefore, their installation in plants operating at lower PLFs is likely to put the plants under more financial stress.

One of the main challenges in the implementation of emission control systems in TPPs is reluctance on the part of banks and other financial institutions to fund these investments due to the already prevailing high level of stress in the sector. In view of this, the association of power producers has requested the MoP to resolve the issue. It is being contemplated that public financial institutions such as the Power Finance Corporation and Rural Electrification Corporation would be designated to fund such investments. Meanwhile, state utilities have sought funds from the National Clean Energy Fund and the Power Sector Development Fund.

The implementation of emission control technologies would require design modifications in the upcoming units. Such units are likely to face delays in commissioning and an increase in project costs due to these modifications. The plants will also have to rework their power purchase agreements in order to account for the cost of implementing these technologies. Further, units operating at a very low PLF of 10-20 per cent or facing intermittent plant operation cannot recover the huge investment cost without a steep rise in power tariffs. With the deployment of emission control technologies, the cost of auxiliary power consumption and operations and maintenance will also increase. In order to reduce the impact of increased costs on the project economics, the MoP has issued directions to the Central Electricity Regulatory Commission to facilitate the smooth implementation of the revised norms.

One of the key raw materials for the operation of FGD systems is good quality limestone. A 500 MW unit requires approximately 60,000 tonnes of limestone in a year. This implies that about 27 mt of limestone will be required per year for 225 GW of capacity. The availability and transportation of the desired quality of limestone in such huge quantities poses a major challenge. Further, around 38 mt of gypsum will be generated every year when all plants have operational FGD systems. The disposal/utilisation of such a large quantity of gypsum is another area of concern. A group has been formed by the MoEFCC to suggest a way for the disposal of gypsum and calcium sulphite. Innovative solutions to use gypsum need to be explored as dumping gypsum near the project site is environmentally hazardous. It could be used as a raw material for low-cost housing and as a filler in plastics and fibreglass. It could also be used for reducing mine subsidence, recontouring landforms and improving soil conditions at mining sites.

With the extension of the timeline for meeting the emission standards, power utilities now have five more years to adhere to the revised norms. However, the government needs to ensure that power plants take measures to progressively reduce their emissions. Setting of milestones and introduction of a penalty structure can help track their progress and also enable path adjustment in case the desired results are not achieved.

The Central Pollution Control Board has prioritised the installation of emission control technology at power stations in the neighbouring states of Delhi considering the high level of pollution in the city. From the perspective of getting benefit from the installation of pollution control technologies, areas with high pollution levels are the low-hanging fruits. Further, pollution control measures should be prioritised in areas with significant population so as to have a wider impact.