In line with the changing market scenario, the Central Electricity Regulatory Commission (CERC), in November 2018, notified the Deviation Settlement Mechanism [DSM] and Related Matters, (Fourth Amendment) Regulations, 2018. Under the amendment, the CERC has revised the deviation charges and linked them to the daily average clearing price (ACP) in the day-ahead market (DAM) at the power exchange. The linking of DSM rates with DAM prices is expected to ensure better demand estimation and accurate scheduling by discoms.

Further, at 50 Hz, the daily ACP in the DAM will be used as the basis for determining the market-linked DSM price. The ceiling for average daily ACP discovered in the DAM at 50 Hz will be Rs 8 per kWh. The daily ACP of the power exchange with a market share of at least 80 per cent in energy terms will be considered for linking the DSM price vector. If no exchange has a market share of 80 per cent or more, the weighted average day-ahead price will be used. Further, in case of non-availability of daily ACP due to no trade on a given day, the ACP for the last available day will be considered for determining the DSM charge.

Besides this, with the view ensuring truly inadvertent deviations, the amendment stipulates that in the event of sustained deviation from schedule in one direction (positive or negative) by any regional entity (buyer or seller), the entity will be required to change its sign of deviation from schedule, at least once after every six time blocks (as against 12 time blocks earlier). Further, an additional charge for the violation of sign change stipulation will be levied for each such violation during a day. Apart from this, under the amendment to regulation 7 (Limits on Deviation Volume and Consequences of Crossing Limits) of the DSM Regulations, the frequency band has been tightened from 49.70 Hz and above and below 50.10 Hz to 49.85 Hz and above and below 50.05 Hz.

In order to ensure a robust DSM within one year or during a suitable time period, the market-linked DSM price will be substituted by the time-block-wise ACP in DAM or, as and when real-time market is introduced, by the hourly ACP or the ACP of such periodicity as may be considered right by the CERC. The amendment also states that after  one year or more (as may be notified by the commission) of its implementation, the total deviation from schedule in energy terms during a day will not be in excess of 3 per cent of the total schedule for the drawee entities and 1 per cent of the schedule for generators. An additional charge of 20 per cent of the daily base DSM payable/ receivable will be applicable in case of violation. 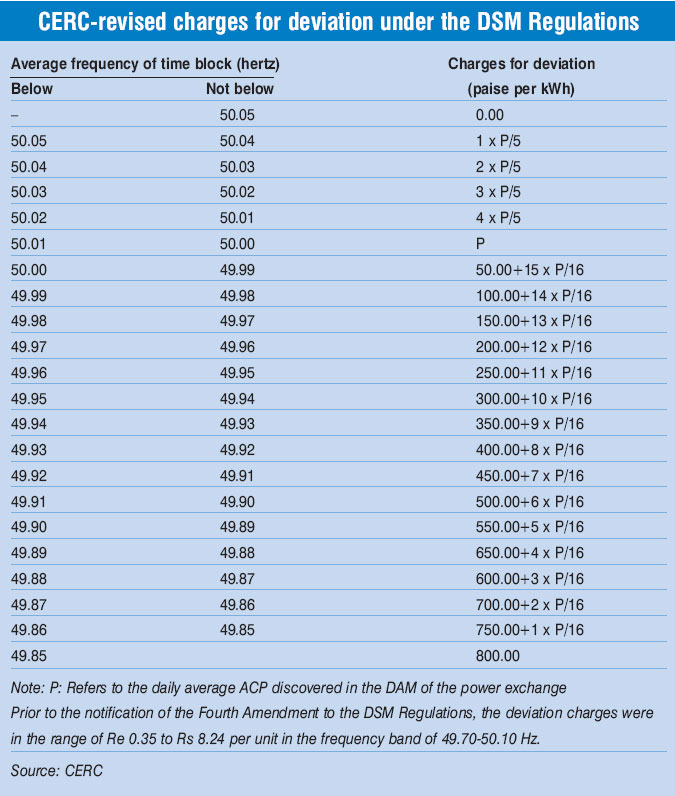 Broadly, the amendment is aimed at creating a stable electricity market and energy grid with the help of right and dynamic pricing signals for deviation settlement and by obviating arbitrage between DAM and DSM. Earlier, the DSM charges were determined as per the DSM price vector decided by the CERC at the applicable rates determined in 2014. Although the regulation provided for the revision of the DSM price vector, the price revision process was time-consuming. Ideally, the DSM price should capture the value of lost load so that the utilities procure adequately in advance to meet their universal service obligations. However, the DSM prices were such that they were creating contrary price signals.

It is important for DSM prices to be real time and truly reflect the transmission congestion scenario in the country by capturing the price differential across the geography. However, earlier, the DSM was based on the premise that a congestion-free transmission network exists and any amount of power can flow, which is not the case.

The management of grid imbalances plays a crucial role in maintaining a secure and reliable grid, and ensuring a healthy and robust interplay across the power generation, transmission and distribution segments. The central regulator, together with system operators, is taking steps to ensure secure and reliable grid operations in a rapidly changing market scenario. The amendment to the DSM Regulations by the CERC is crucial given the growing integration of renewable energy capacity into the grid. The linking of the deviation price vector to the ACP of the DAM in power exchanges will bring the DSM prices close to market prices, encouraging market participants to plan and procure power adequately in advance. Besides, the revised DSM would incentivise the utilities to undertake improved forecasting and provide the desired market signals for setting up of reserve and ancillary service-based capacity.