Reducing emissions from coal-based power plants has been one of the key focus areas of the government. To this end, the Ministry of Environment, Forest and Climate Change (MoEFCC) had in December 2015 come out with standards for emissions of sulphur oxide (SOx), nitrogen oxides, mercury and suspended particulate matter (SPM) by thermal power plants (TPPs). Flue gas desulphurisation (FGD) was identified as one of the key technology solutions to be used at TPPs to comply with these standards.

While implementation was slow to begin with, FGD technology uptake gathered momentum after the Central Electricity Authority (CEA), along with regional power committees, drafted a plan last year for the phased implementation of FGD systems at plants. However, FGD systems have been commissioned for only about 1.8 GW of capacity so far, against the 165 GW of capacity where FGD systems were planned to be installed. Meanwhile, the equipment market has witnessed heightened tendering activity, with utilities issuing/awarding a number of tenders over the past few months.

A look at the FGD market in India and recent developments…

The major FGD technologies available in the market today are dry sorbent injection solutions/systems, semi-dry FGDs (including spray dryer absorbers and circulating dry absorbers) and wet FGDs (limestone, seawater and ammonia based). Amongst these, wet limestone-based FGD has been found to be the most suitable in the Indian context. The majority of the de-SOx technologies adopted across the world are based on wet limestone technology. Wet limestone FGD is best suited for large units (500 MW and above) and those that require high removal efficiency. For newer units, it is considered to be the best available technology.

However, the technology to be used needs to be assessed on a case-by-case basis, depending on the sulphur content of coal, efficiency requirements, capital and operating costs, location of plants, suppliers, availability and reagent costs, and the supply chain and disposal/sale of the by-product. Seawater FGDs are suitable for coastal plants and open water cycle-based plants. Ammonia-based FGD is mainly suited for units using coal with high sulphur content. However, it has limited suppliers, requires a high amount of ammonia and poses safety hazards. Dry and semi-dry FGDs are mainly used for units with low plant loads. However, they have lower efficiency.

While the existing TPPs were required to adopt the revised standards by December 2017, the new plants (installed after January 2017) had to comply on being commissioned. However, several plants failed to comply with these norms due to reasons such as limited experience, long shutdown periods, space constraints, the high costs involved and lack of clarity on the pass-through of the additional capital and the high operating costs for complying with these norms.

The CEA has now drawn up a revised plan for the installation of FGD systems, based on which the MoEFCC has extended the deadline by five years and the power plants have been directed to meet the standards by 2022. 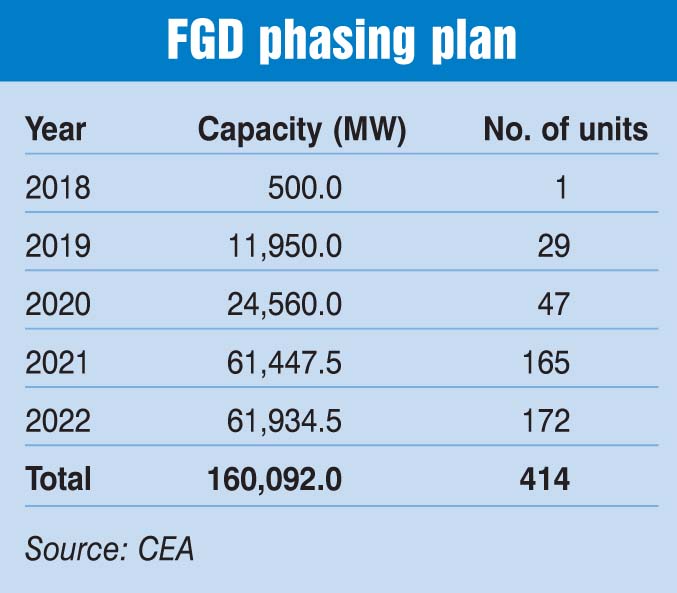 According to the CEA, as of September, FGD systems have been commissioned for 1,820 MW of capacity across three units at two private sector power plants – Tata Power’s 500 MW Trombay thermal power station (TPS) and CLP India’s 2×660 MW Mahatma Gandhi TPS (which is currently under renovation and maintenance).

Meanwhile, bids have been awarded for 27 other thermal power units aggregating 13,540 MW of capacity. With all these units belonging to NTPC, the company is leading the way in FGD implementation. Since September 2018, NTPC has awarded three more projects – the 2×110 MW Tanda TPP, the 1×500 MW Unchahar TPP and the 4×210 MW Dadri TPP.

With regard to the key equipment providers for FGD systems in the country, Bharat Heavy Electricals Limited (BHEL) has emerged as the front runner. As of October 2018, the company has secured FGD orders for 32 units from various customers. Other key players include Larsen & Toubro (L&T), Reliance Infrastructure Limited, GE Power and ISGEC Heavy Engineering. Notably, domestic equipment providers have partnered with global firms for developing FGD technology in the country. While BHEL has collaborated with Mitsubishi Hitachi Power Systems, Japan, L&T has collaborated with Japan’s Chiyoda Corporation.

The introduction of FGD technology needs considerable capital expenditure along with additional periodic costs associated with raw material, operations and maintenance (O&M), and auxiliary consumption. According to ICRA Limited, the installation of FGD systems will entail an investment of Rs 5 million-Rs 6 million per MW. This is likely to increase the levellised cost of generation for a coal-based power plant by Re 0.11-Re 0.13 per kWh, and ultimately lead to a retail tariff hike of 2.1-2.4 per cent. These charges will, however, apply for as long as the capital expenditure is capitalised.

As discussed in the sections above, wet FGD is the most effective technology for SOx emission reductions. According to a study conducted by an independent agency, the O&M cost for FGD units is estimated to be around Rs 0.6 million per MW per annum or Re 0.15 per kWh. Additional variable charges include the reagent cost, that is, limestone, water consumption, disposal of the by-product, gypsum, and the increase in auxiliary consumption (1-2 per cent). Lastly, there will be an additional impact due to interest costs on the debt financing required for the FGD installations and operations.

The generating stations would, moreover, have to be shut down for the installation of the FGD system, which would, in turn, impact revenue generation during this period.

The investment for FGD installation is expected to be largely funded through debt, with the rest, about a quarter of the total cost, being financed through internal accruals or fresh equity infusion. Debt financing in the absence of deep bond markets will largely operationalise in the form of bank debt. Depending on the available mode of debt financing, the interest costs would lie within the range of 8.5-13 per cent.

In September 2018, the Supreme Court tightened the timelines for meeting the emission norms at 57 central sector thermal power units, requiring them to comply with the SOx and SPM norms by December 31, 2021. These include 48 units owned by NTPC Limited and nine owned by the Damodar Valley Corporation. These plants comprise over 500 MW of capacity each, and are located in highly polluted areas, with a population density of over 400 persons per square km. Further, in a case related to pollution in the Delhi-NCR region, the Supreme Court had accelerated the installation of FGD technology in the area to December 2019.

In another significant policy development, the Ministry of Power (MoP), in May 2018, issued a notification stating that investments in the installation of emission control technologies would be considered for tariff pass-through. The MoP has observed that the MoEFCC’s notification requiring compliance with the environmental norms by TPPs is of the nature of a change in law event, thereby giving the right to power plants to approach the appropriate commission for approval for additional capital expenditure and compensation for the same.

Progress on the implementation of FGD systems has been slow owing to a mix of reasons. One of the main challenges has been reluctance on the part of banks and other financial institutions to fund these investments due to the high level of stress already prevailing in the sector. In October 2018, the power minister held a meeting with bankers in this regard.

The unavailability of good quality limestone, one of the key raw materials, poses a major challenge. The CEA is in discussions with the Ministry of Mines regarding meeting the limestone requirement at power plants. Further, when all plants have operational FGD systems, around 38 million tonnes of gypsum would be generated every year. The disposal/utilisation of such a large quantity of gypsum is an area of concern. A group has been formed by the MoEFCC to suggest ways for the disposal of gypsum and calcium sulphite.

The MoP has written to the MoEFCC and the Central Pollution Control Board (CPCB) to verify the emission levels of 6,435 MW of capacity (27 units) that is claimed to be SO2 compliant.

The impact of capital and other costs involved in FGD implementation, which had been a key concern for plant owners, has been taken care of to a certain extent with the cost being allowed as a pass-through in tariff. However, plant owners have been slow in providing the capex assessment to the regulators.

Undoubtedly, there has been significant progress with regard to the installation of FGD systems at power plants, including an uptick in ordering activity in recent months and measures taken by the government to streamline and expedite the implementation of FGD systems. That said, the current ordering trend still does not support the CPCB timelines. Central utilities other than NTPC, the state gencos and private players, which are all still at early stages of implementation, need to catch up. Meanwhile, the government needs to regularly track the progress in project implementation by plant owners.