Power transformers are a crucial part of electrical transmission networksfor stepping up/down the voltage between generator and distribution circuits. Since power transformers are vital for grid management and the supply of quality power, their role is expected to grow with the increase in variable renewable energy capacity and decentralised generation, and the introduction of new loads such as electric vehicles. These changes could exacerbate the issues of phase imbalance, power quality and overloading. In order to tackle these challenges, new transformer technologies will be required for better control of power flows across the grid. The key emerging technologies include high-voltage direct current (HVDC) converter transformers, phase shifting transformers (PSTs), coupling transformers, mobile transformers as well as smart transformers. Power Line presents an update on the market and technology trends in the power transformers segment…

Based on size, power transformers can be classified into three types – small (500-7,500 kVA), medium (up to 100 MVA) and large (100 MVA and above). The power transformer market is dominated by large players such as ABB, Bharat Heavy Electricals Limited (BHEL), CG Power, GE, Siemens, Transformers and Rectifiers India Limited, TBEA and Vijai Electricals. There are nearly 19 transformer manufacturers in the 400 kV voltage category, and eight each in the 765 kV and 800 kV voltage categories.

HVDC technology has gained traction in recent years due to its ability to transmit large amounts of electricity over long distances with lower losses. An HVDC system can reduce transmission losses by around 50 per cent compared to a high-voltage alternating current system. HVDC converter transformers form the core of HVDC projects as they transfer power between an AC system and the DC transmission network. HVDC transformers also provide an appropriate tapping range for DC voltage and for reactive power control, thereby serving as an integrated part of the DC transmission network.

While back-to-back HVDC bi-pole (±500 kV) lines have been in operation in India for a long time, ±800 kV multi-terminal HVDC projects have been commissioned only recently or are under way. The ±800 kV multi-terminal Northeast-Agra UHVDC link (Phase I) was commissioned by Power Grid Corporation of India Limited (Powergrid) in 2015 while the ±800 kV Raigarh-Pugalur, Champa-Kurukshetra lines, and the ±320 kV Pugalur–North Trichur line are still under construction.

BHEL commissioned its first indigenously developed PST at the Kothagudem Thermal Power Station in Telangana in 2014. The transformer is used to control and improve the power flow between 400 kV and 220 kV networks in either direction by shifting the phase as the system requires. According to the Central Electricity Authority, preliminary studies have been undertaken for the deployment of PSTs in the interregional link between the southern grid and the NEW (North Eastern Western) grid.

Coupling transformers find application in flexible AC transmission systems (FACTS) to enhance the control and stability of the transmission system and increase its power transfer capabilities. These transformers connect the grid with the static synchronous compensator (statcom), which is a FACTS device that ensures the supply of a dynamic, precise and adjustable amount of reactive power to the AC power system that they are connected to. statcom cannot be connected directly to high-voltage grids like 220 kV and 400 kV. Therefore, a coupling transformer is needed as the intermediate device to connect the statcom system and the high-voltage grid with bi-directional power flow.

Traction transformers are a critical component in the traction chain,and impact both the train performance and operator services. Indian Railways’(IR) electrification plans have pumped up the demand for traction transformers. Many transformer manufacturers are expanding their facilities to cater to the growing demand. 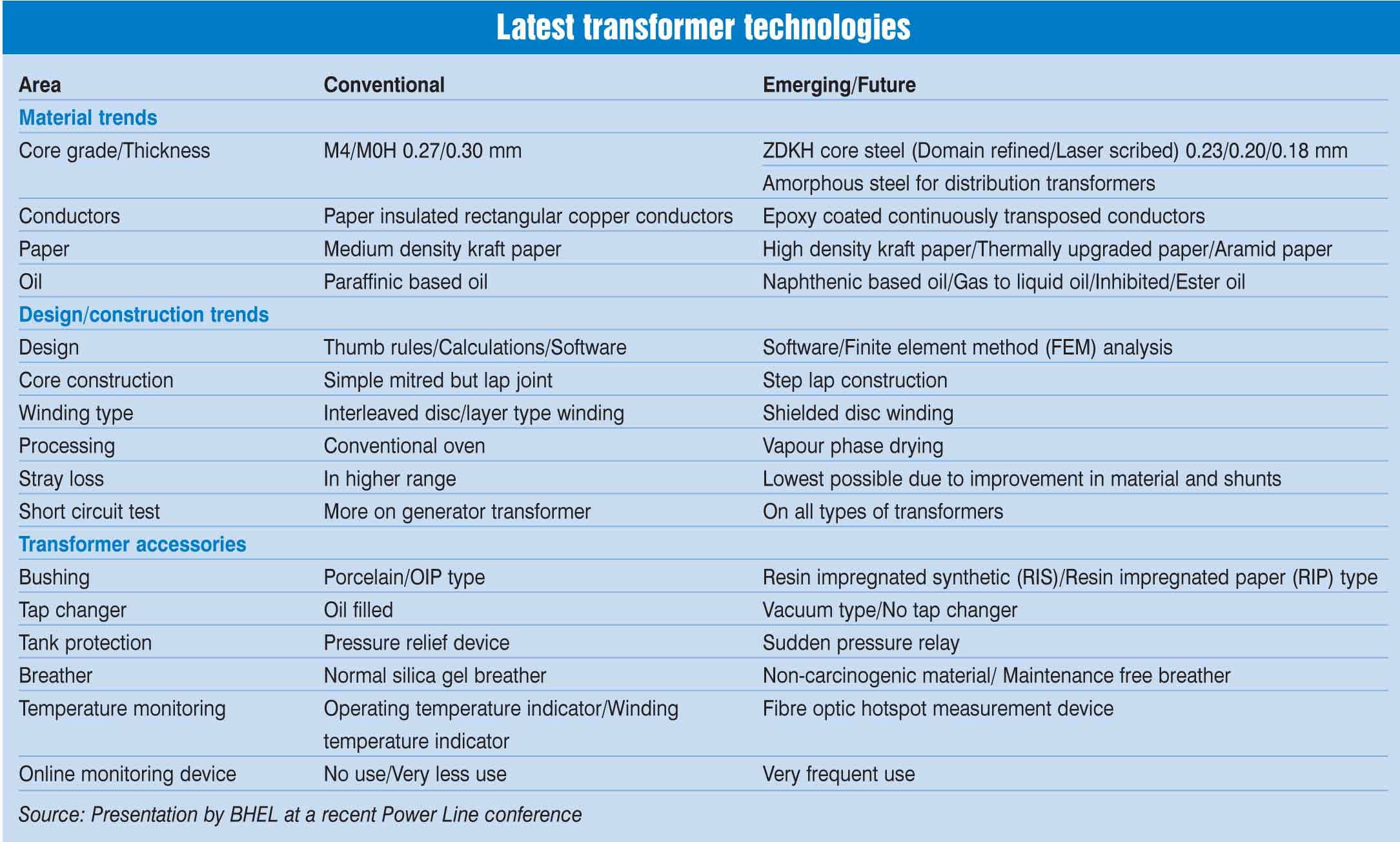 Smart transformers are an integral part of digital substations, which independently regulate voltage and maintain contact with the smart grid in order to allow remote administration and real-time feedback on power supply parameters. The use of these transformers is gaining ground at the distribution and transmission levels. These transformers are equipped with intelligent electronic devices, and smart monitoring and diagnostics features. Further, as smart transformers consume less energy, they help in reducing greenhouse gas emissions.

A smart transformer provides the accurate amount of power required and immediately responds to fluctuations in the power grid, acting as a voltage regulator. These features make smart transformers ideal for the power systems that are designed for renewable energy integration.

The lack of standardisation of transformer specifications, online monitoring devices and transformer fittings is a key challenge for the industry. Another bottleneck is the poor availability of raw material/components for the manufacture of transformers, such as copper rods, insulation, cold-rolled grain-oriented steel and online monitoring devices. Besides, inadequate infrastructure for the transportation of heavy equipment poses a challenge for manufacturers and utilities alike. Other issues include monopoly of labs and higher rates for short circuit testing, payment delays by utilities, and cost over runs in engineering, procurement and construction contracts due to delays in obtaining right of way, clearances, etc.

Going forward, the demand for conventional as well as next-generation power transformers is expected to increase given the government’s focus on strengthening the transmission system to integrate the growing renewable energy capacity. HVDC is set to grow further. It will give a boost to  inter-regional power trade within the country as well in the SAARC region, thereby giving an impetus to converter transformer demand. Meanwhile, 1,200 kV AC technology is under field trial and, going forward, transformers compliant with this technology will be required. In addition, Indian Railways’ plan to achieve 100 per cent electrification of its broad gauge network by 2021-22 will contribute to the demand for traction transformers. However, transformers over the age of 20 years will need to be replaced in a phased manner and this can serve as a potential growth opportunity for renovation and refurbishment.