In the process of delivering electricity from the point of generation to the end-consumer, transformers perform the essential task of managing the electricity voltage at various stages. While power transformers are used in the transmission network at higher voltages (400 kV, 200 kV, 110 kV, 66 kV, 33 kV) and are generally rated above 200 MVA, distribution transformers are used in the distribution network at low voltages (11 kV, 6.6 kV, 3.3 kV, 440 V, 230 V) and are rated at up to 200 MVA. With high investments in the transmission segment and ongoing reforms in the distribution segment, the transformer industry is on a growth trajectory. Besides increasing their manufacturing capacity, Indian transformer manufacturers have matured in terms of technology over the years. Today, they are capable of producing transformers of up to 1,200 MVA, the highest transmission system voltage in the world. A shift in the energy mix due to the increasing share of renewables and a growing focus on smart infrastructure have expanded the market for smart and digital transformers. Power Line presents an overview of the transformer market…

In recent years, the transmission segment (across 765 kV, 400 kV and 220 kV AC voltages and 800 kV and 500 kV DC voltages) has seen significant growth, which in turn has increased the demand for power transformers. As of November 30, 2018, the total transmission line length stood at 404,204 ckt. km, AC transformer capacity at 850 GVA and high voltage direct current (HVDC) transformer capacity at 22.5 GVA. With almost 345 GVA of capacity, transformers at the 220 kV voltage account for the highest share in the total transformer capacity. The highest year-on-year growth of 40 per cent was witnessed in the 220 kV category followed by 34 per cent in the 400 kV category and 23 per cent in 765 kV while the HVDC segment remained more or less constant. Going ahead, extra high voltage (EHV) substations (800 kV, 765 kV and 500 kV) are expected to be the key focus areas given the capacity additions planned between 2017 and 2022. The capacity at the 765 kV level is targeted to be increased to 281,500 MVA from the current level of 204,500 MVA. Meanwhile, as Powergrid takes up the execution and implementation of intra-state transmission projects, the demand for power transformers at 400 kV and below levels is likely to rise significantly. 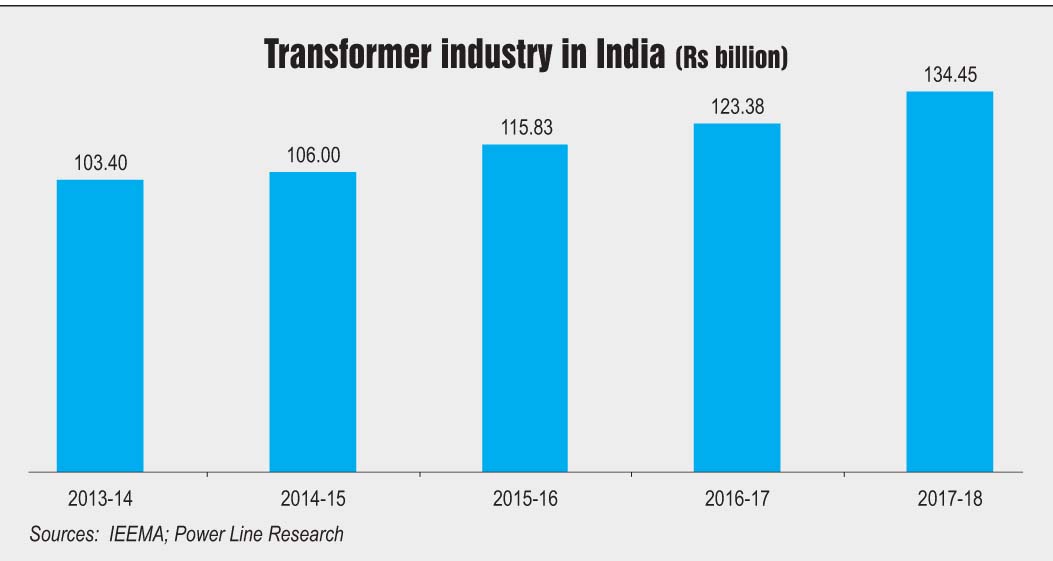 The demand for transformers will continue to increase due to the increase in generation capacity, significant investments in transmission infrastructure, growth in foreign investment, rise in per capita consumption of electricity, and emergence of new avenues like electric vehicle (EV) charging stations. The demand will also increase with the replacement of old transformers with energy efficient transformers.

The government’s target to provide 24×7 quality power to every household has given a significant boost to the demand for distribution transformers. Schemes like the Deendayal Upadhyaya Gram Jyoti Yojana, the Integrated Power Development Scheme and Saubhagya, aimed at strengthening sub-transmission and distribution networks in rural and urban areas and improving electrification in the country, have also increased transformer demand among utilities. Further, utilities have stepped up their efforts to replace the ageing and inefficient fleet of transformers in order to improve efficiency and augment capacity. The government also plans to increase the fleet of EVs in the country with a target of 30 per cent EVs by 2030. With this, the existing distribution transformers are likely to face overloading. Hence, either these transformers will be replaced or more transformers will be added to cater to the additional demand from electric vehicles.

Metro rail projects and railway electrification projects have also contributed to the increase in demand for distribution transformers and given the increased government spending in this segment, they are set to drive the transformer demand in the future as well. Meanwhile, as part of the government’s renewable energy plan, it targets to have an installed capacity of 225 GW by 2022. Under the plan, a significant generation capacity is continuously being added and a number of transmission lines and substations are being constructed, thus driving the demand for transformers. Further, the upcoming smart grids and smart cities are creating demand for advanced transformers equipped with intelligent electronic devices as well as HVDC converter transformers. Besides an increase in domestic demand, exports are also expected to increase.

The transformer market is segmented into oil-immersed and dry-type transformers based on the insulation material. Oil-immersed transformers account for the largest share owing to advantages such as energy efficiency, lower sound level and longer operating life. On the other hand, the demand for dry type transformers is also growing with the increasing focus on safety and environment protection. Another emerging type is phase-shifting transformers (PSTs), which control the power flow in the transmission grid independent of generation. These transformers protect the transmission lines and high voltage equipment from thermal overload, improve transmission system stability and control the power flow between different networks, thereby leading to better efficiency and reduction in losses. Transformers today include multiple intelligent electronic devices and control systems and are called smart transformers. With the help of these systems, the operator can remotely monitor the behaviour of critical transformer components such as the transformer core, windings, oil, tap changer and bushings. Smart transformers reduce energy consumption as well as greenhouse gas emissions. 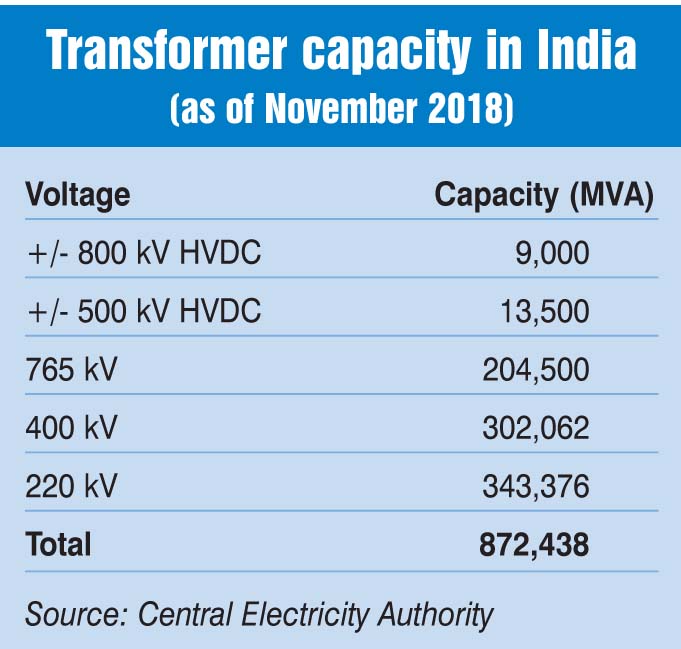 The supply of cold-rolled grain-oriented (CRGO) steel, the key raw material for the manufacturing of transformers, is one of the major challenges facing the transformer industry. CRGO is not produced in India and needs to be imported. Low supply and fluctuations in its prices hamper the timely production of transformers. Due to the lack of sufficient supply of CRGO steel, there is a huge volume of low grade/defective CRGO steel coming into the market despite being banned by the quality control order. This is severely affecting the quality and cost of transformers. While there is a pressing need to have a local CRGO steel manufacturing facility, no concrete steps have been taken towards this yet. Hence, manufacturers need to plan and forecast their material needs more efficiently.

Other key issues affecting the transformer industry are related to the Bureau of Energy Efficiency (BEE) quality control order, payment delays from state utilities and lack of adequate testing facilities. As per a notification by the BEE, distribution transformer manufacturers in India need to obtain a certification from the agency for energy-efficient distribution transformers under IS:1180 Part 1/2014. Manufacturers already need to apply for a certification from the Bureau of Indian Standards (BIS) for the same. Around 400 distribution transformer manufacturers across India have obtained the BIS licence. Obtaining dual certification of the same product is a lengthy process. Even the renewal of certifications takes a long time. In certain cases, renewal applications have remained pending for more than two months, resulting in the non-acceptance of the transformers by the discoms. To this end, the validity of the certification is being considered to be extended to five years from the current validity of three years. Another concern is the lack of adequate testing facilities for transformers, especially in the high voltage and ultra high voltage segments. The delay in payments by the utilities has always been a cause for concern for transformer manufacturers. Though their payment position has improved due to the Ujwal Discom Assurance Yojana, it needs to be further streamlined.

According to industry players, the EHV transmission capacity is more or less sufficient to cater to the current generation capacity. This could mean that a less number of EHV tenders will be floated in the the near future. Other challenges faced by the industry include the lack of mandatory guidelines for the installation and maintenance of transformers, overloading of transformers, tampering/bypassing the protection equipment, and theft of material/oil which leads to fire and failure of transformers. Also, domestic transformer manufacturers are increasingly facing competition from foreign manufacturers, especially those from China and South Korea, as they offer a price advantage to consumers.

The demand for transformers is expected to increase in the coming years. An estimated investment of Rs 2.6 trillion is required in the transmission sector to meet the future peak load, which is expected to be over 230 GW by 2021-22. The majority of these future investments are likely to be spent on the expansion of physical grid infrastructure. By 2021-22, more than 85,000 ckt. km of transmission lines and 230,000 MVA of transformer capacity are expected to be added to the grid. Further, the pace of expansion of the transmission and distribution sector is likely to increase in line with the government’s renewable energy and 24×7 Power for All goals. Overall, there is a significant market opportunity for transformer and other equipment manufacturers over the next few years.