Tightening its grip on coal-based power plants, the National Green Tribunal (NGT) has imposed penalties of up to Rs 50 million on plants not meeting the 100 per cent fly ash utilisation mandate. The order comes in response to applications filed by a few individuals raising concerns regarding the ineffective implementation of various notifications issued by the Ministry of Environment, Forest and Climate Change (MoEFCC) for the proper utilisation of fly ash generated by coal- and lignite-based thermal power plants (TPPs). As per the Central Electricity Authority (CEA), all-India fly ash utilisation stood at a dismal 67 per cent as of March 2018, lower than the 100 per cent target, which was to be achieved by December 2017. The NGT’s order is significant as it legally binds all TPPs to ensure the complete disposal or utilisation of fly ash.

As per the MoEFCC’s notification dated November 3, 2009, all upcoming TPPs commissioned were required to achieve 100 per cent ash utilisation in a phased manner within four years of commissioning. For operational plants, the time limit was five years from the date of notification. On January 25, 2016, the ministry issued an amendment to the existing notification, stipulating TPPs to meet 100 per cent fly ash utilisation by December 31, 2017, which has not been met by the majority of TPPs.

On November 20, 2018, the NGT passed another order, wherein it examined the fly ash utilisation plans of 20 states. The states sought time extension of two to five years to meet the 100 per cent utilisation target, which was rejected by the tribunal as any extension of time would have conflicted with the mandate under the Environment (Protection) Act, 1986, particularly when such an extension will harm the environment.

The tribunal further called for the constitution of a joint committee comprising representatives from the MoEFCC, the Central Pollution Control Board (CPCB), the Indian Institute of Technology-Roorkee and others to finalise the action plan for 100 per cent utilisation and scientific and safe disposal of fly ash. The committee will also determine the amount of damages to be paid for the violation of fly ash utilisation norms and give its report to the MoEFCC within two months from the date of assuming charge.

Awaiting the submission of the report, the NGT directed all TPPs that have failed to dispose of 100 per cent fly ash by December 31, 2017 to deposit damages for environment restoration. For power plants up to 500 MW, the cost of damages stands at Rs 10 million; for TPPs up to 1,000 MW, the amount is Rs 30 million; and for those over 1,000 MW, it stands at Rs 50 million. The damages were to be paid to the CPCB within a month of the order failing which interest at the rate of 12 per cent per year will be payable. 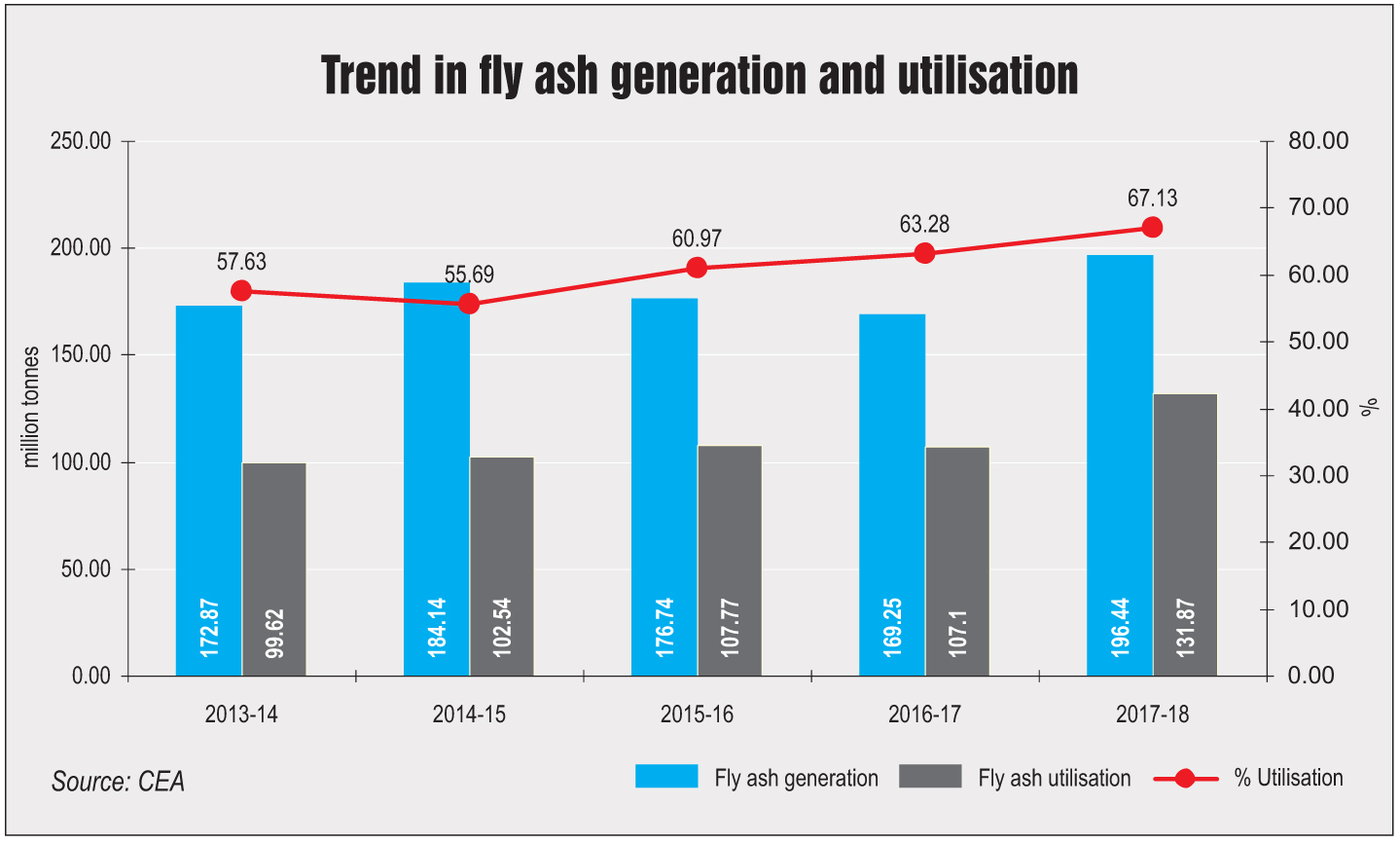 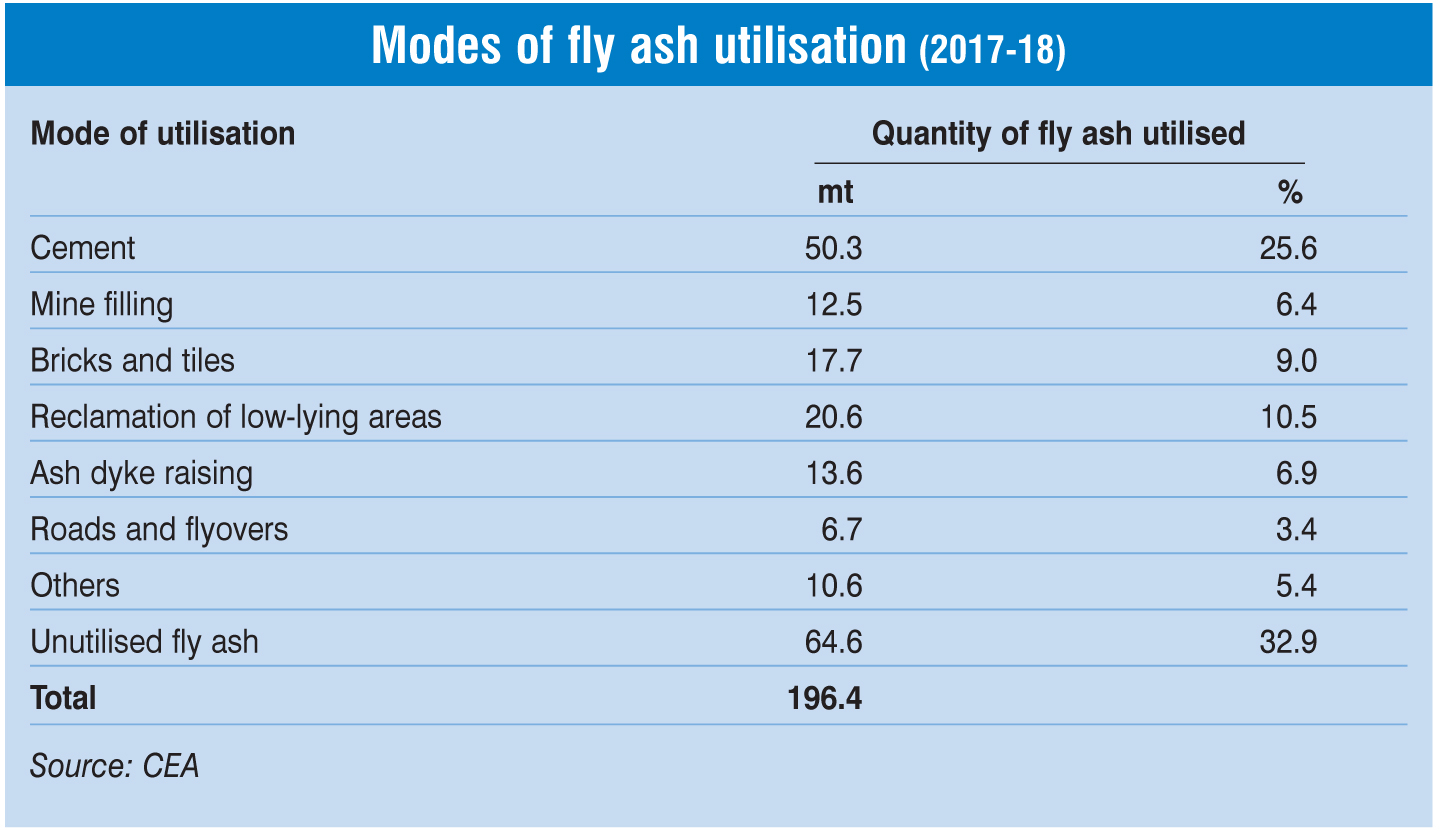 Clearly, thermal power producers have failed to comply with the norms and need to step up their efforts to ensure the effective utilisation of fly ash owing to the health and environmental hazards posed by it. Given that coal-based generation will continue to account for a major share in the energy mix in the near to medium term, the generation of fly ash is expected to increase. The regulators and policymakers are also expected to get more stringent in order to protect the environment and penalise the offenders. Utilities, therefore, need to take proactive steps to achieve 100 per cent fly ash utilisation at the earliest.