In a move that is expected to significantly open up the market for cross-border power trading, the government, in December 2018, issued new guidelines for the import/export of electricity, repealing the earlier guidelines issued in 2016.

Back in 2016, the issuance of the cross-border trade guidelines was considered a watershed development. Besides lending significant clarity on the regulatory and policy framework, the guidelines allowed power to be traded through the Indian power exchanges. However, the 2016 guidelines fell short of industry expectations as spot trading, the primary product of the power exchanges, was excluded from cross-border trading. The biggest positive of the amended guidelines is the approval for trading in the day-ahead market (DAM). “We have allowed foreign developers to access our exchange. This is going to be a major incentive for projects in Nepal and Bhutan,” stated Aniruddha Kumar, joint secretary, hydro, Ministry of Power, at a recent Power Line conference.

According to Rajesh K. Mediratta, director (business development), Indian Energy Exchange Limited. “From a market perspective, the most significant aspect of the new cross-border guidelines is that these pave the way for entities of neighbouring countries to participate in the DAM of the power exchanges. Under the previous guidelines, such entities were only eligible to participate in the term-ahead market of the power exchanges with low liquidity as compared to the DAM. The advantages of trading through DAM auctions on the power exchanges, including competitive prices, flexibility in procurement, reliability, efficiency and counter-party risk management, have now been extended to the neighbouring countries. This development has the potential to enable the creation of a SAARC electricity market in the near future.”

Further, the new guidelines have relaxed a number of norms, which is expected to boost investor confidence and promote wider market participation in this space. “The new guidelines are pathbreaking and remove all previous limitations that stymied the formation of a South Asia regional power grid. The new rules offer a true level-playing field that is fundamental for evolution from a “bilateral trade” to a “power market”. Specifically, the guidelines do not discriminate between public and private entities, or between commercial coal and renewable energy, and between buy and sell contracts for the short and long terms. This liberalisation has far-reaching positive benefits for the electricity industry across all South Asian countries including India,” says Kameswara Rao, partner, PricewaterhouseCoopers (PwC).

Resource complementarities and growth in power demand, especially in the sub-region comprising Bangladesh, Bhutan, India and Nepal (BBIN), have always made a strong case for increasing regional power trade over the years. However, cross-border trading is nascent with about 3,000 MW of power traded between India and its neighbouring countries (Bangladesh, Nepal, Bhutan and Myanmar) against a total installed capacity of over 360 GW in the four countries. Experts note that this is significantly lower than its global counterparts. Nordic countries trade up to 91 per cent of their total production while other western European countries like Germany and the UK trade 49 per cent and 47 per cent of their production, respectively.  A look at the new guidelines and their implications for cross-border energy trade…

Guidelines for Import/Export of Electricity, 2018

Trading through power exchanges: Power trading, at present, is restricted to government-to-government deals. With the opening up of the power exchange platform, all buyers and sellers in BBIN will be able to participate in an orderly marketplace.

While the new guidelines allow trading in the DAM, the Ministry of Power (MoP) has stated that such trade will only be allowed through Indian trading entities.

Tripartite agreements: According to the earlier guidelines, India could trade electricity with its neighbouring countries under bilateral agreements. The new guidelines have given explicit recognition to tripartite agreements. The MoP has now included a provision, under which two countries having bilateral agreements with the Indian government can trade electricity with each other through Indian transmission lines after entering into an agreement with the central transmission utility of India.

According to experts, this provision is expected to immensely benefit Bangladesh, which can now import power directly from neighbouring countries like Nepal and Bhutan. Last year, Bangladesh signed an MoU with Nepal to import power. It has also taken initiatives to invest in hydropower generation in Nepal.

Clarification on the sale of power from domestic coal-based power plants: The new guidelines have clarified that only those coal-based generating plants will be allowed to export electricity that use imported coal, spot e-auction coal, or coal obtained from commercial mining.

Thus, plants with domestic linkages or captive mines have been barred from selling power for export. According to industry observers, this provision could translate into power export opportunities for power plants based on imported coal, which are struggling to find buyers in the Indian market.

Private major Adani Power is currently building a 1,600 MW imported coal-based power plant in Godda district of Jharkhand. The power plant is proposed to be set up to sell power to Bangladesh. The company has signed a power purchase agreement (PPA) with the Bangladesh Power Development Board (BPDB) for the project.

Removal of restrictions on the investment model: The MoP has also repealed an earlier provision, according to which only those companies that were fully owned by the government or those that had at least 51 per cent stake of Indian companies could export power to the Indian market after obtaining one-time approval from the designated national authority. Any other power generation projects that did not fulfil the above-mentioned requirements had to obtain approval on a case-by-case basis to export electricity.

The revised guidelines state that approval from the designated authority will not be necessary, except in certain cases involving intergovernmental agreements. The earlier provision had raised concerns for Nepal and Bhutan as the stipulation discouraged foreign investors in the hydro power segment to build export-oriented hydro power projects.

Bhutan has an aggregate hydro potential of around 30,000 MW. A significant number of projects are under-construction under the Indo-Bhutan energy cooperation agreement. As per intergovernmental agreements, India plans to import about 10 GW of power from Bhutan by 2020. Currently, 3,540 MW of capacity is under construction and 7,285 MW is at various stages of development. 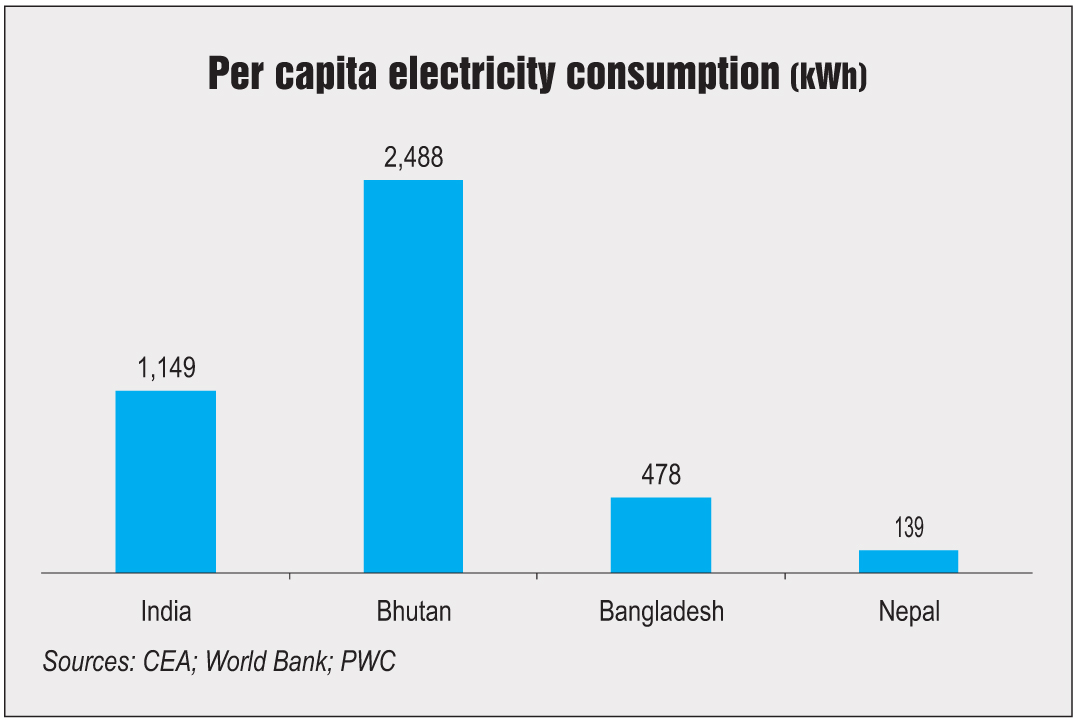 Currently, Bangladesh imports power from India through two interconnections. Cross-border electricity imports between Bangladesh and India started in 2013 from Beharampur (India) to Bheramara (Bangladesh) through a 400 kV high voltage direct current (HVDC) link. The line passes through the two substations in the two countries and allows Bangladesh to import 500 MW of power. Although the initial transfer capacity through this line was 500 MW, an additional 500 MW was added last year with the commissioning of the second block of the HVDC line. A third 500 MW HVDC block is planned to be added by 2021. Meanwhile, a second interconnection was commissioned in 2015-16 between Tripura (India) and Comilla (in Bangladesh) for exporting 100 MW of power.

The power-starved Bangladesh market has seen significant traction in the participation of power supply tenders in recent months. Last year, NTPC won a tender to supply 300 MW of power from the power stations of Damodar Valley Corporation to BPDB for a period of 15 years till 2033. In October 2018, PTC India, which currently supplies 290 MW of power to Bangladesh, signed two new agreements for 200 MW to supply power on a short- and long-term basis for 15 years. The short-term power for 200 MW will be supplied from the power pool of West Bengal State Electricity Distribution Company Limited. The long-term power will be supplied from the imported coal project of Meenakshi Energy Limited. Earlier, in August 2018, Sembcorp Gayatri Power Limited won a competitive tender conducted by BPDB to supply 250 MW of power to Bangladesh from its 2,640 MW power plant in India for a period of 15 years.

At present, Nepal is importing 420-440 MW of power from India, including 70 MUs of free electricity every year from the Tanakpur HEP (3×40 MW). It is also importing 80 MW of power through the Dhalkebar (Nepal)–Muzaffarpur (India) line. Nepal has a total hydropower potential of over 83,000 MW, but only 770 MW has been tapped so far. Thus, the overall electricity supply is inadequate to meet the country’s rising power demand. There are about 13 cross-border radial interconnections between India and Nepal at the 11 kV, 33 kV and 132 kV levels. The 400 kV D/C Dhalkebar (Nepal)–Muzaffarpur (India) line (operational at 132 kV) was commissioned in February 2016. In August 2017, another 220 kV transformer was added at Dhalkebar, the biggest substation in Nepal. Works on the upgradation of the Dhalkebar substation to 400 kV are currently under way. The substation is part of the World Bank-supported Nepal-India Electricity Transmission and Trade Project, which aims to establish a high voltage cross-border transmission link of about 1,000 MW between India and Nepal to facilitate electricity trade between the two countries.

In December 2018, in order to strengthen its cross-border trading relationships with Nepal, the Central Electricity Authority (CEA) of India and the Nepal Electricity Authority agreed to draft guidelines for taking forward the concept of energy banking. Under the proposed arrangement, Nepal will supply its excess energy to India in the wet season and import an equal quantum of energy in the winter season. Since the load pattern in India and Nepal is different, Nepal will have excess generation in the wet season and there is a high demand for electricity in India during the summer. In Nepal, demand picks up in the winter season and it can import electricity from India in line with the concept of energy banking. 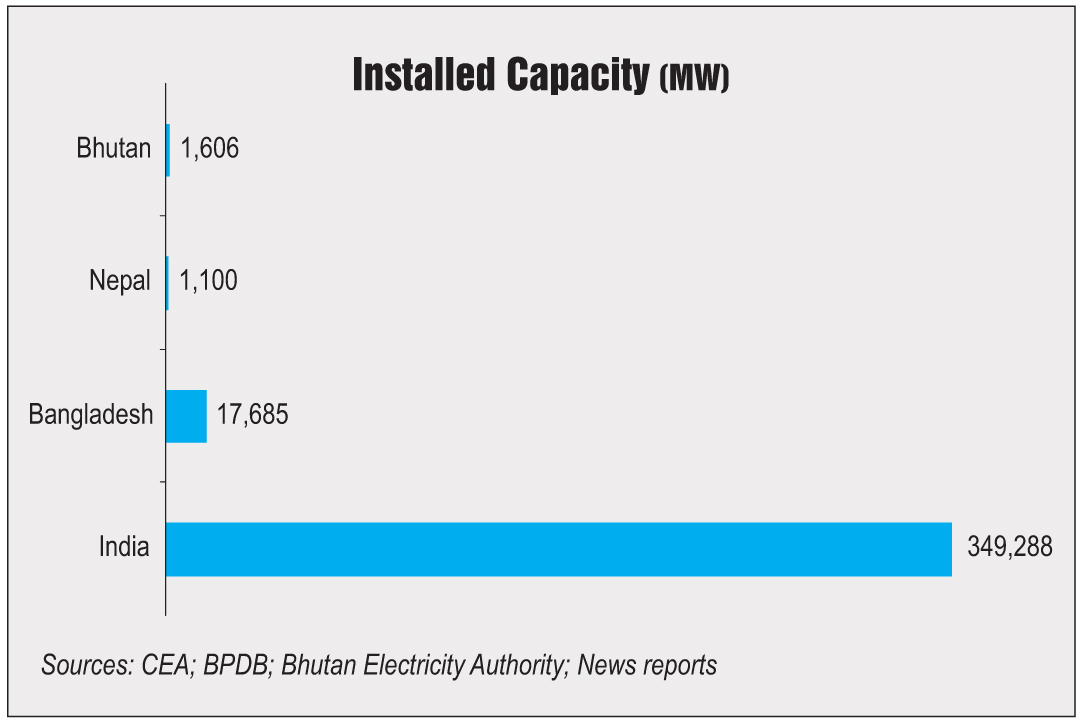 India has been selling about 3 MW of power to Myanmar under a PPA signed in 2016-17 between Manipur State Power Distribution Company Limited (India) and Tamu District Committee (Myanmar). In 2016, an undersea cable project was also proposed with Sri Lanka, though not much progress has taken place since then. The HVDC connection between Madurai (India) and Anuradhapura (Sri Lanka) through the Palk Strait was proposed to transfer up to 500 MW of power.

According to a study by think tank IRADE, cross-border electricity trade in the South Asian region has the potential to grow to 60,000 MW through 2045 with the likely strengthening of regional power cooperation among countries including India, Bhutan, Bangladesh, Nepal, Pakistan, Sri Lanka and Myanmar.

On the outlook for cross-border trading, Rao says, “In the near term, seasonal power shortages across the subcontinent can be addressed by tapping India’s under-utilised private thermal plants. In the longer term, the quality of power supply to the Northeast will improve and can promote industrialisation. The hydro and gas-based power plants of our neighbouring nations will bring significant flexible generation necessary for increasing the share of renewable energy. In all, the new guidelines can lead to a greener and a more efficient power system in the subcontinent.”

That said, coordinated transmission planning, and timely development of transmission infrastructure, hydropower projects, and regulatory frameworks for addressing issues pertaining to open access, etc. are essential for further driving cross-border power trade. “Our countries need to work together closely to resolve the transmission interconnection issues so that projects do not get stranded. We also need to establish a forum of South Asian electricity regulators so that technical issues like harmonisation of grid codes and load forecasting can be addressed,” notes Samdrup K. Thinley, chief executive officer, Bhutan Electricity Authority.

For now, the rules and regulations by the CEA and the CERC are awaited. As Mediratta concludes, “Well defined CERC regulations and the CEA’s cross-border rules will facilitate transactions and see new areas of cooperation. New connections and the right policy and regulatory framework will promote power trading, ensure energy security, create business opportunities, and address renewable integration challenges. India and its neighbours have the potential to create a well connected power market on the lines of the European Union.”