Incorporated in July 2000, post the unbundling of the Rajasthan State Electricity Board (RSEB), Rajasthan Rajya Vidyut Utpadan Nigam Limited (RRVUNL) has come a long way. The state-owned generation company has an installed base of over 6,500 MW including a supercritical 660 MW coal-based unit, which was commissioned in the current fiscal. Over the past two years, the company has transitioned from being a loss-making utility to becoming a profitable company.

Going forward, the genco has 1,980 MW of coal-based capacity under construction, which will be based on supercritical technology. Besides, the genco is making efforts to ensure that the existing capacity is compliant with the new norms. 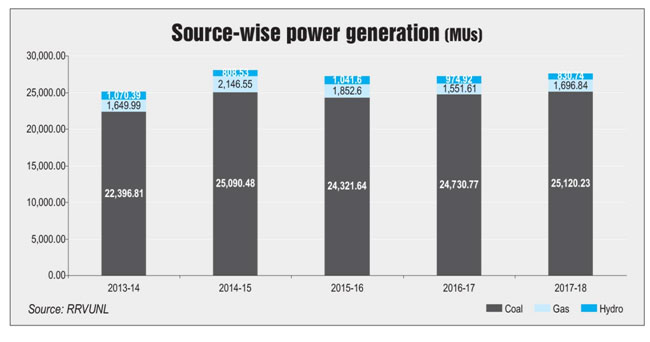 One of the major sources of coal for the company is Coal India Limited (CIL), which provides about 170 million metric tonnes (mmt) – 129 mmt through South Eastern Coalfields Limited and 41.5 mmt through Northern Coalfields Limited. Besides, RRVUNL has two captive coal blocks, the Parsa and Kente Extension coal blocks in Chhattisgarh. With approval from the Ministry of Environment, Forest and Climate Change, the mining capacity of coal blocks has been increased from 10 million tonnes per annum (mtpa) to 15 mtpa with effect from August 2018.

In 2017-18, more than 90 per cent of the company’s generation was based on coal. Gas and hydro-based plants accounted for 6 per cent and 3 per cent respectively.

Meanwhile, RGTPS and DCCPS recorded PLFs of 61.1 per cent and 8.5 per cent, respectively, in 2017-18. DCCPS, which depends on the Panna-Mukta and Tapti gas fields and the KG-D6 basin for its fuel supply, recorded lower PLF due to low availability of gas whereas RGTPS received gas supply from GAIL. In addition, DCCPS received instructions from the state load despatch centre to back down operations, resulting in even lower load levels.

Going forward, RRVUNL is focusing on adding supercritical capacity. The company is executing two such projects (2×660 MW each) as extensions to the existing plants at Suratgarh and Chhabra.

While unit 5 of CTPS was commissioned in August 2018; Unit 6, synchronised in July 2018, is expected to be commissioned shortly in 2019. Meanwhile, major works for the Suratgarh project (Units 7 and 8) have been completed and are expected to be commissioned in 2019. The company is also in the process of adding a 160 MW unit to RGTPS. The project is currently on hold for now due to the non-finalisation of gas prices by Focus Energy Limited and GAIL (India) Limited.

RRVUNL is also taking measures to control pollution and keep the emission within the prescribed limits. The company is drafting tender specifications and issuing tenders for the implementation of flue gas desulphurisation systems at all four coal-based plants. The project is expected to be completed between 2020 and 2022.

On the fuel supply front, RRVUNL has been allocated the Parsa and Kente Extension coal blocks with a capacity of 5 mtpa and 7 mtpa, respectively. Mining at these blocks has not yet started.

The majority of the issues faced by RRVUNL are concerned with coal. The company has been able to materialise only 50-55 per cent of the allocation from CIL. This is because of low availability of railway rakes and high cost of transporting coal through alternative routes such as road.

Another major area of concern is the retirement of fleet to address environmental concerns and efficiency concerns. Four units (200 MW each) of KTPS are more than 30 years old, which are required to be retired as per the guidelines issued by the government, or replaced with different technologies such as ultra supercritical and later to carbon capture and storage. These technologies entail high investments.

RRVUNL is also looking at the restructuring and disinvestment of some of its plants including CTPS, KaSTPS and GLTPS. In January 2017, it signed an MoU with power major NTPC Limited, which has been extended till November 2018, for the acquisition of CTPS by NTPC in a phased manner. This has, however, not yet materialised and enabling actions for the transfer are still under way. The disinvestment process of KaSTPS is also on hold due to issues pertaining to transfer of coal linkages. For restructuring of GLTPS, a share purchase agreement is currently being drafted.

Overall, with the commencement of almost 1,980 MW of capacity in 2019 and sustained improvement in revenue and profits, the company’s performance is expected to improve in the short to medium term, although fuel supply will remain an area of concern.

Based on a presentation by Pollakonda Ramesh, Special Secretary, Department of Energy, Government of Rajasthan, and Chairman and Managing Director, RRVUNL