Trigeneration, as the name implies, is the production of three types of energy, electricity, heat and cooling, from one fuel. An absorption chiller is linked to the combined heat and power (CHP) plant to enable this process. Typically, a gas-fired generator is used to produce electricity and heat while the exhaust heat goes to an absorption chiller, which produces chilled water for air conditioning or refrigeration and hot water for heating applications.

Trigeneration provides benefits in the form of energy and cost savings, and reduced greenhouse gas emissions. As per Energy Efficiency Services Limited (EESL), trigeneration can reduce the end user’s primary energy demand by 60-70 per cent, increase overall energy efficiency by almost 75 per cent, and cut greenhouse gas emissions by up to 30 per cent. The trigeneration system can provide 300 tonnes of refrigeration for every MW of power it generates, saving up to 195 kW of electricity, and eliminating the need for investments in centralised cooling equipment and hot water boilers. Further, by creating a parallel source of electricity through captive generation, trigeneration can protect consumers against surging tariffs.

The potential of trigeneration technology in India’s energy scenario is estimated at 15 GW, which can be scaled up to 30 GW over the next five years. Tapping into this potential will require an investment of Rs 9 trillion across the building and industry sectors, resulting in an annual emission reduction of 32.2 million tonnes. Some of the potential consumers of the technology are commercial establishments such as hospitals, hotels, shopping malls and technology parks; industries such as dairy, food and beverage, and pharmaceuticals; and large engineering manufacturing facilities. Currently, most of these facilities/ industries rely on grid power supply and have stand-alone systems for heating and cooling applications. Switching to trigeneration can help in reducing the demand for grid electricity and provide environment-friendly cooling/heating solutions for a variety of industrial applications. 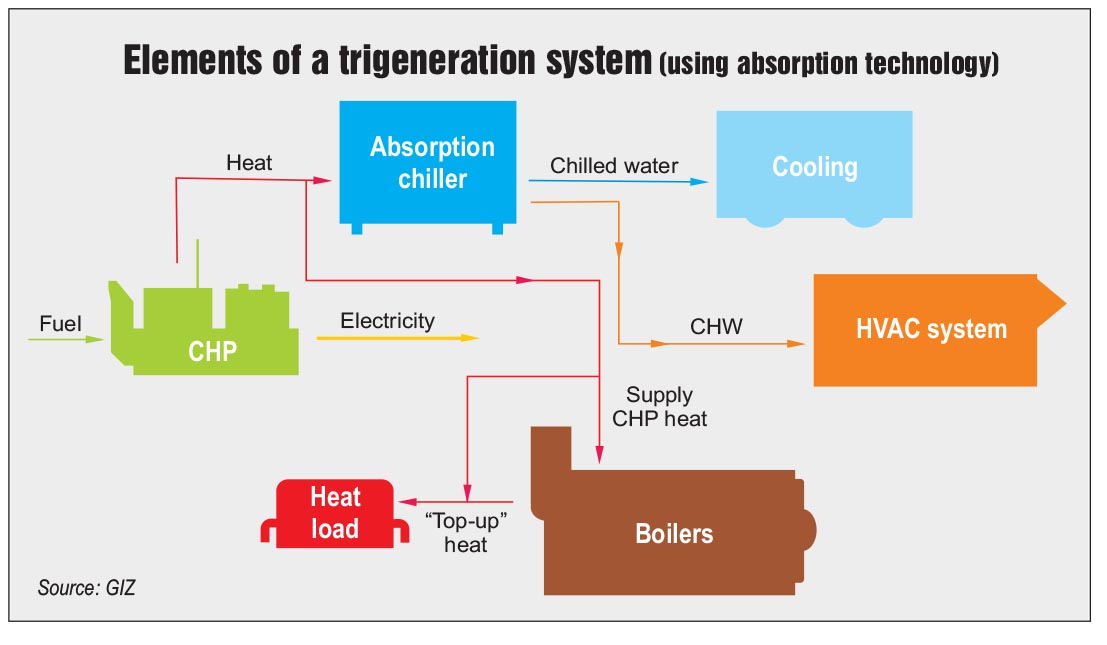 EESL is taking pioneering initiatives to commercialise trigeneration technology in India. The company has an estimated capex requirement of Rs 7 billion for the initiative and has already raised about $2.5 billion as loans from multilateral funding agencies. The company has introduced a zero capex model providing integrated turnkey solutions and services for trigeneration. It will provide metered heating, cooling and power under a 10-15-year cooling, heating and power purchase agreement. EESL will bear the upfront capital costs and risks while providing turnkey product installation for gas engines and vapour absorption machines, and annual operations and maintenance services. EESL will recover the costs through savings in consumers’ operating expenses. Consumers will receive 24×7 power, cooling and heating supply at a nominal cost compared to the prevalent electricity tariffs.

EESL has already signed agreements with Mahindra & Mahindra, Tata Motors, JJ Hospital (Mumbai) and Sassoon Hospital (Pune) for the deployment of trigeneration technology. For Mahindra & Mahindra, EESL will install and service an 803 kW trigeneration project at an investment of Rs 250 million. Since most trigeneration systems employ gas engines, EESL has signed MoUs with GAIL (India) Limited and Mahanagar Gas Limited to secure gas supply. The company is also conducting energy audits in industries, hotels, airports, etc. to assess the feasibility of trigeneration. It expects to finalise trigeneration projects worth Rs 1.5 billion in 2018-19. Further, EESL is planning to introduce trigeneration gas engines of about 60 MW for corporate and industrial consumers in the country. Earlier, it had announced plans to introduce the offerings of Edina UK in the Indian market. Edina, a leading CHP, gas and diesel generation solutions provider, was acquired by EESL in March 2018. The acquisition will help EESL capture the international market potential for trigeneration.

The key challenge in trigeneration is the deficit in domestic gas supply for fuelling gas engines. While the supply of compressed natural gas in Delhi and Gujarat is adequate owing to a well-developed pipeline infrastructure, it is lacking in other parts of the country. Therefore, there is a need to look for alternative cleaner fuels such as biofuel or biogas for powering trigeneration systems. In addition, market conditions need to evolve further to create a more receptive environment for trigeneration and improve its commercial viability. Systems that provide economical and environment-friendly power generation have gained uptake across the world and Indian consumers are expected to soon catch up on the trend. N