Household electrification under the Pradhan Mantri Sahaj Bijli Har Ghar Yojana (Saubhagya) is on the last leg of its journey, with around 27,000 households across Rajasthan and Chhattisgarh remaining to be electrified. Launched in September 2017, the key objective of Saubhagya is to fulfil the target of “Power for All” by March 2019. Work under the scheme is going on in full swing to achieve the target. As of December 2018, the internal deadline set by the government, of 100 per cent household electrification, could be achieved across 25 states. Recently, initiatives such as Saubhagya Rath and a toll-free helpline have been launched to expedite electrification. So far, 25.17 million households have been electrified under the Saubhagya scheme.

According to the Saubhagya dashboard accessed on February 23, 2019, 27,907 households remain to be electrified. Around 70 per cent of the unelectrified households are located in Chhattisgarh (19,896 households) and the remaining ones are in Rajasthan. These households are targeted to be electrified by March 31, 2019. In recent months, a couple of new initiatives have been launched by the states to achieve the deadline of March 31, 2019. A campaign has been launched to identify and electrify any left-out households. Under the campaign, the Saubhagya Rath, a special vehicle, is going around villages and towns, and any left-out households can approach them to avail of an electricity connection under the scheme. A dedicated toll-free helpline has also been launched for the purpose of reporting left-out households. This is in addition to the existing helpline of 1912.

With regard to the government’s internal deadline of 100 per cent household electrification by December 31, 2018, 25 states had achieved the target by then. However, about 1 million households were left to be electrified across four states – Assam, Rajasthan, Meghalaya and Chhattisgarh. In order to incentivise the states to complete the target, the scheme envisages an additional 15 per cent grant as incentive for states that complete the target by December 2018. Apart from this, in September 2018, the government introduced an award scheme, wherein the first discom to achieve 100 per cent household electrification (in a given category of states) by November 30, 2018 was given a cash reward of Rs 5 million. With regard to the number of households targeted for electrification under the scheme, the Ministry of Power has recently clarified that the states had reported that about 40 million households were unelectrified as on October 10, 2017, based on the census figure. However, the survey by the electrification teams found that the houses left for electrification were fewer in number. Many census households were living together and availing of electricity services together with a single connection, and many households have already availed of connections in the process of village electrification and intensive electrification under other scheme. Therefore, as more and more villages were visited by the teams, the figures for houses to be electrified and those electrified were updated on an actual basis. 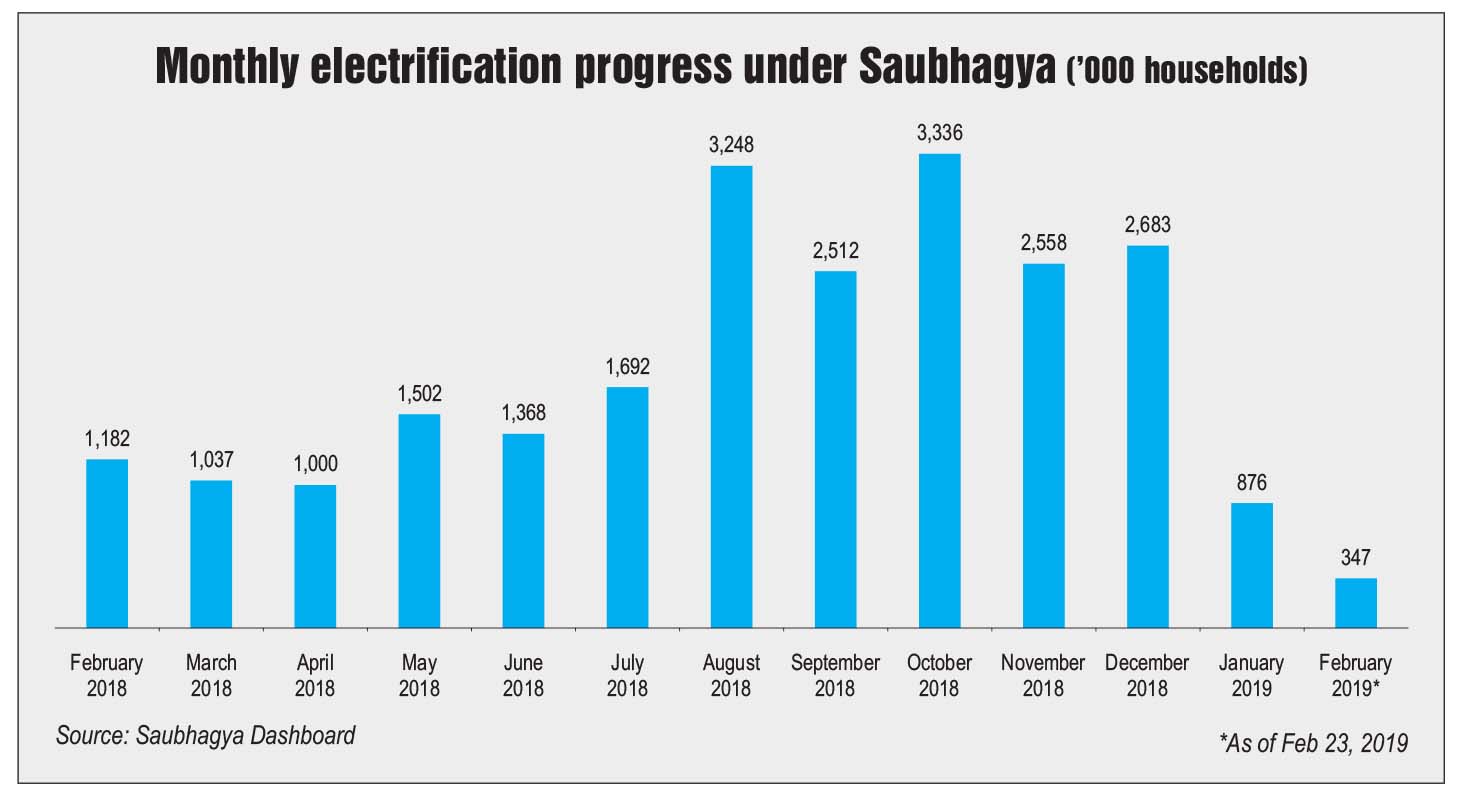 The concerted efforts of discoms as well as the state and central governments have undoubtedly played a major role in the implementation of the Saubhagya scheme. A recent study by TERI discusses various real-time challenges faced by the discoms in their journey to 100 per cent household electrification. The key challenges pertain to human resource availability and management, delays in material supply and overall coordination of activities. Various process improvements have been adopted by the discoms to achieve the electrification goals. These include the development of advanced IT-based energy and revenue management systems, expediting distribution transformer replacements.

That said, post the implementation of the Saubhagya scheme, the discoms would have the bigger responsibility of managing an enlarged network and consumer base. In order to maintain the revenue sustainability of the discoms, it is essential that electricity bills are paid on time by consumers. Besides this, the discoms need to keep a check on electricity theft and maintain efficient power distribution to achieve the desired level of aggregate technical and commercial losses. Overall, ensuring quality and reliable power supply to all households in the country is crucial for the success of the scheme.