The renovation and modernisation (R&M) programme for thermal power plants (TPPs) in India has been in place for over 35 years. Under R&M, the TPP units are equipped with the latest technologies to improve their overall performance and efficiency. It is a low-cost solution for adding generation capacity over a short gestation period as against setting up a new plant. R&M also reduces forced shutdowns, resulting in higher uptime and higher revenue. The initial objective of R&M was to enhance generation from the old TPP units and extend their useful life. Today, R&M practices are being adopted to reduce the environmental impact of TPPs and adapt to the changing energy scenario. Thus, the key growth drivers for R&M are tightened emission norms, ageing plants and flexibilisation requirements.

In recent times, the focus of R&M has shifted to reducing the environmental impact of TPPs and enhancing flexibility in operations to enable large scale renewable energy integration.

In December 2015, the Ministry of Environment, Forest and Climate Change notified and revised the norms for TPP emissions (including particulate matter, sulphur oxides and nitrogen oxides). To meet the norms, power plants are required to install/retrofit various technology solutions such as electrostatic precipitators (ESPs), flue gas desulphurisation systems and selective non-catalytic reduction and selective catalytic reduction systems. As per the latest plan formulated by the Central Electricity Authority (CEA), all power plants are expected to complete the installation of these technologies by 2022. Apart from this, undertaking R&M of the existing pollution control equipment can help reduce the emission levels. The Guru Nanak Dev TPP at Bhatinda is a case in point. After R&M of the ESPs installed at the plant, the SPM emissions decreased from the levels of 140 mg per Nm3 to less than 100 mg per Nm3.

Another emerging application of R&M is the flexibilisation of TPPs. With the increasing penetration of renewable energy, maintaining grid stability and security has become challenging. Flexible operations require frequent and rapid ramp-up and ramp-down of power plant capacity. While power plants operating on supercritical technology offer flexibility in operations, old power plants experience severe deterioration in performance under flexible operations. Pilot tests are being undertaken at a number of power plants to identify appropriate R&M measures to reduce the impact of flexible operations. One such test has been successfully conducted at the Dadri Thermal Power Station (TPS) with 40 per cent minimum load and 3 per cent ramp up/ ramp down capacity (15 MW per minute). Some of the R&M measures that can help improve flexibility include reduction in mill size, increase in the number of mills, installation of advanced burners and indirect firing systems in boilers, and use of special alloys for improved material strength.

The experience so far

Between April 2017 and September 2018, works have been completed only at six units (887 MW). These include R&M of Units 3 and 6 (33.5 MW each) of North Eastern Electric Power Corporation Limited’s Kathalguri gas power plant; and LE works at the 200 MW Unit 4 of the Ukai TPS and the 210 MW Unit 3 of the Wanakbori TPS owned by Gujarat State Electricity Corporation Limited (GSECL), Maharashtra State Power Generation Company’s (Mahagenco) 210 MW Unit 6 of Koradi TPS and Uttar Pradesh Rajya Vidyut Utpadan Nigam Limited’s (UPRUVNL) 200 MW Unit 12 of Obra TPS. Further, three units were under shutdown for R&M/LE works as of September 2018 – the 100 MW Unit 7 and 200 MW Unit 13 of UPRUVNL’s Obra TPS and the 110 MW Unit 6 of Bihar State Power Generation Company Limited’s Barauni TPS. 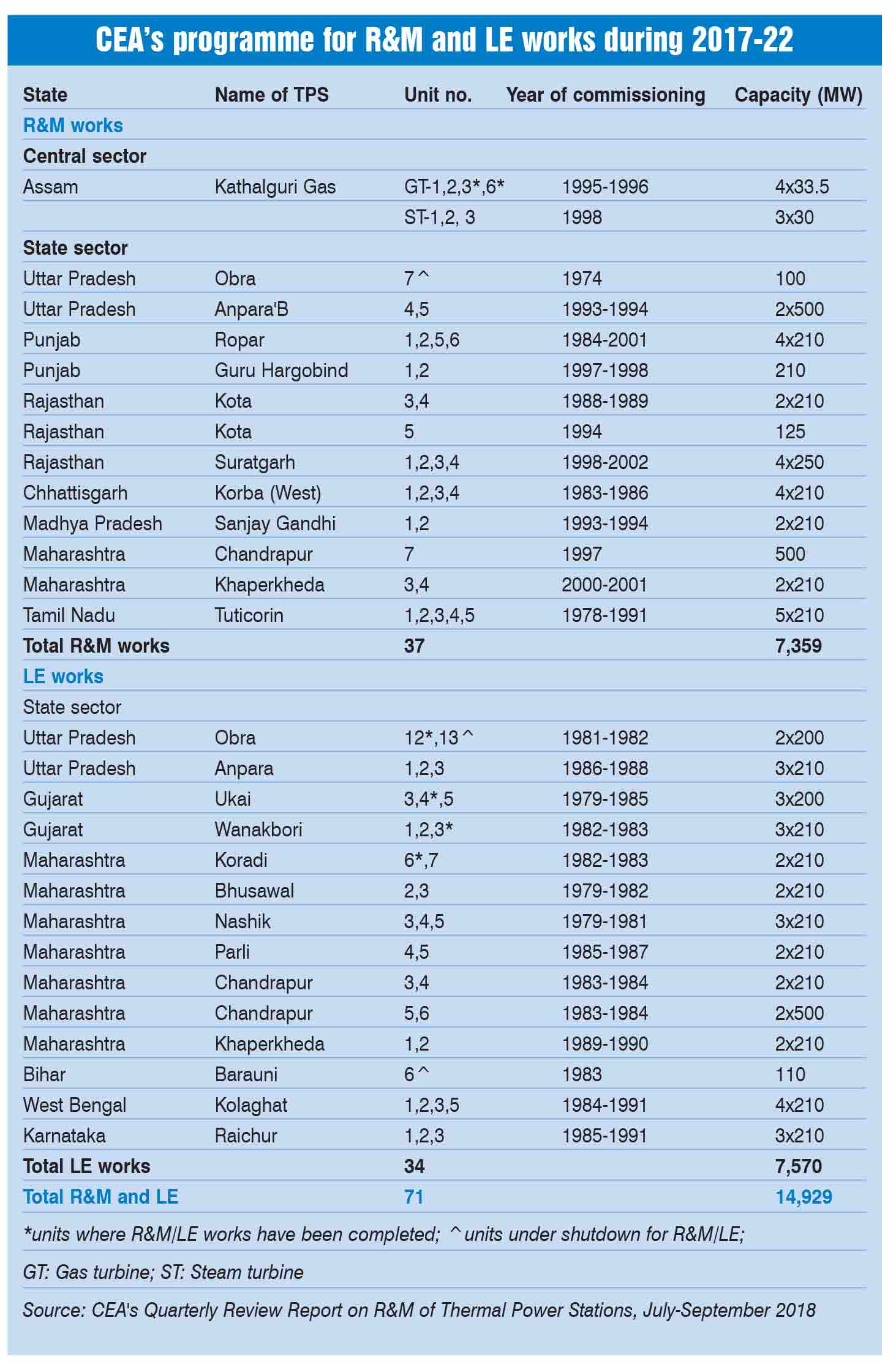 One of the major issues faced in the R&M of thermal plants is the delay in execution. The entire process starting from conducting feasibility studies, tendering and awarding contracts, to procuring materials and commissioning the project has been delayed. Often when a plant/ unit is opened up for R&M/LE, new defects and damaged equipment are noticed, which require additional materials, leading to time delays and increasing costs. The contract document often does not address these technical surprises. Another key reason for the slow growth of R&M in India is the need to shut down power generating units for six to eight months. Not many utilities are willing to do so and face a subsequent loss of revenue. Also, obtaining regulatory clearances for plant shutdowns for R&M works is a time consuming process. Further, there is a lack of specialised entities for conducting residual life assessment (RLA) studies of power plants. Defining the scope of work and guarantees is also a challenge.

With a large fleet of thermal power plants that is more than 25 years old, there is a huge scope for performance improvement through R&M. Some of the old plants that have already undergone R&M have been performing really well despite having completed their designed economic life. These include the Singrauli STPS, the Talcher TPS and the Ramagundam STPS (between 27 and 34 years of age). These stations operated at more than 80 per cent plant load factors in 2016-17 and 2017-18.

With respect to meeting the environmental norms, FGD systems have been commissioned for only 1,820 MW of capacity (as of September 2018) as against the 167 GW of capacity identified for FGD installation. Further, tenders have been issued for another 65 GW of capacity. This implies that about 100 GW of capacity needs to be tendered over the next two years, if power plants have to meet the revised deadline of 2022.

While TPPs have immense potential for R&M, it is important to minimise the time lag between the technical studies (RLA, detailed project report preparation, etc.) and the actual award of contract and commencement of R&M works, in order to achieve the desired results. Further, adequate regulatory support is needed to promote R&M activities. n