Close on the heels of the March 2019 deadline for the Ujwal Discom Assurance Yojana (UDAY), the government presented a note on the scheme’s three-year progress. Under the scheme, which was launched in November 2015 and covers 27 states and five union territories (UTs), the power ministry states that the states have done well at an aggregate level in terms of operational and financial performance across four key parameters – aggregate technical and commercial (AT&C) losses, average cost of supply (ACS)-average revenue realised (ARR) gap, book losses as well as power purchase costs.

Overall, the report notes that the states that have shown encouraging results and managed to show a turnaround under UDAY are Rajasthan, Gujarat, Haryana, Maharashtra and Andhra Pradesh. Notably, AT&C losses, which are targeted to be reduced to 15 per cent by 2018-19, have shown a significant improvement of 2 per cent, from a level of 20.74 per cent to 18.72 per cent during the three-year period. Further, the revenue deficit (ACS-ARR gap), which is targeted to be brought down to nil by the end of the fiscal, narrowed by 42 paise per kWh in the last three years to Re 0.17 per kWh in fiscal 2019.

While these numbers indicate a promising picture, a closer state-level analysis indicates that there have been a few misses as well. There were only seven states that were below the targeted level at the end of 2017-18. Further, the latest data (unaudited) from the UDAY portal (as of February 23, 2019) shows that AT&C losses have climbed to 19.77 per cent (for 26 states). Further, as per data submitted by the power ministry in a recent Lok Sabha reply, there were still about 14 states in fiscal 2018 that had a revenue gap that was higher than the national level. This gap has widened to Re 0.29 per unit (as of February 23). A look at UDAY’s numbers in the past three years….

AT&C losses: These have reduced from 20.74 per cent to 20.23 per cent to 18.72 per cent in the past three fiscal years. Eight states/UTs – Gujarat, Himachal Pradesh, Karnataka, Kerala, Tamil Nadu, Telangana, Dadra & Nagar Haveli, and Daman & Diu – have already achieved less than 15 per cent AT&C losses.

Going forward, the ministry has requested the states to focus their loss reduction efforts on high-loss divisions to meet their fiscal 2019 goals. During 2017-18, there were 189 divisions that had AT&C losses of greater than 40 per cent across discoms in eight states (60 in Uttar Pradesh, 38 in Madhya Pradesh, 26 in Jharkhand, 23 in Bihar, 21 in Maharashtra, 10 each in Haryana and Rajasthan, and one in Punjab).

ACS-ARR gap: As per the power ministry’s data, the ACS-ARR gap has come down from Re 0.59 per kWh in fiscal 2016 to Re 0.17 per kWh in fiscal 2018. In the first quarter of 2018-19, this reduced to Re 0.28 per unit. Seven states – Chhattisgarh, Gujarat, Haryana, Maharashtra, Rajasthan, Himachal Pradesh and Daman & Diu – have been successful in achieving a negative ACS-ARR gap or a revenue surplus. Further, states that achieved a substantial reduction in their revenue gap were Madhya Pradesh, Uttar Pradesh, Jharkhand, Tamil Nadu, Goa and Manipur.

Book losses: Book losses have reduced by more than 71 per cent, from Rs 514.8 billion in 2015-16 to Rs 150.49 billion in 2017-18.This net reduction in losses is attributable to various factors including an improvement in billing efficiency, tariff hikes, an increase in energy consumption and a controlled rise in power purchase costs, notes the report. 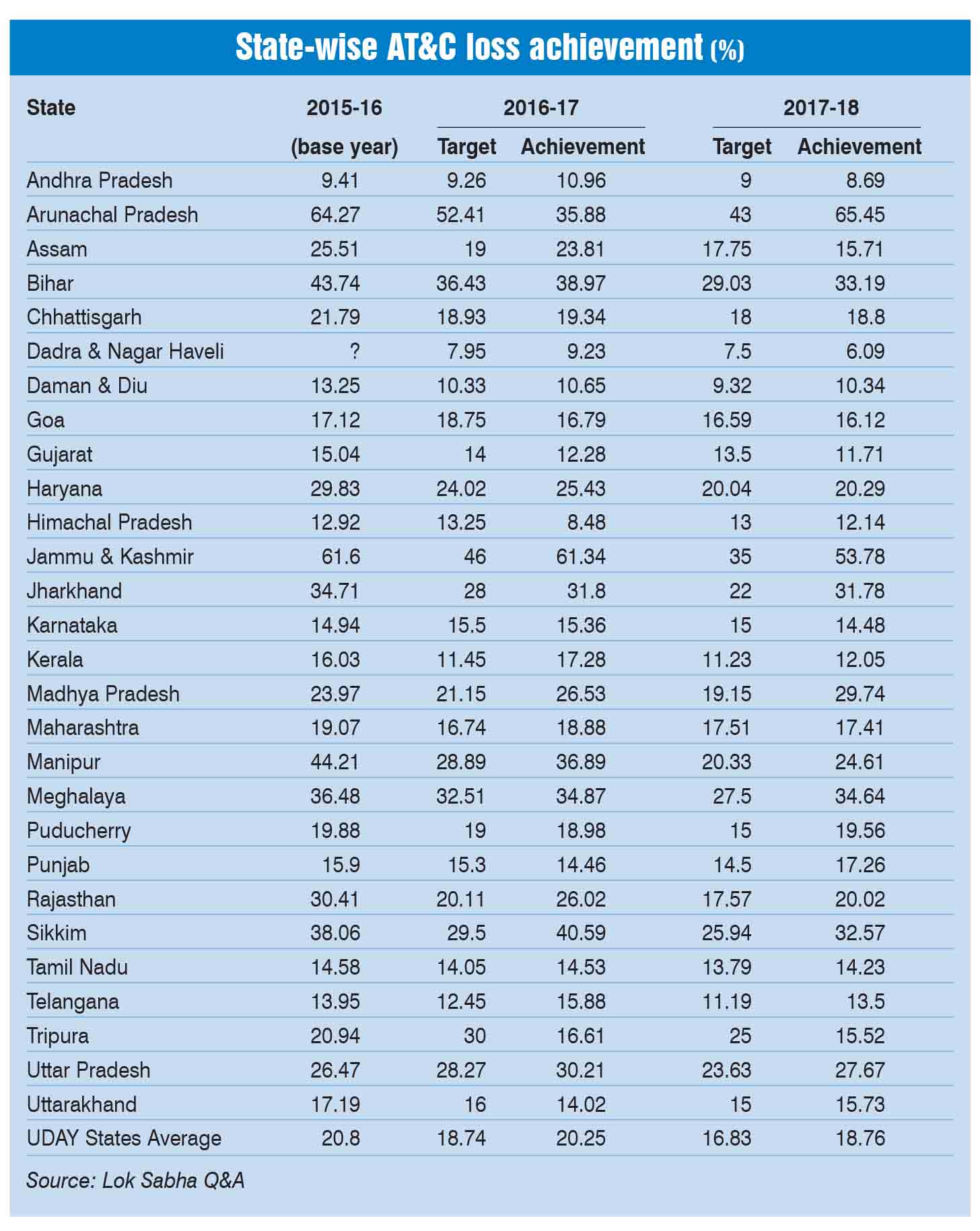 Other operational parameters: Till the first quarter of fiscal 2019, the progress on operational parameters has been mixed. While 100 per cent of the targets have been met under feeder metering in urban areas, 98 per cent of the target has been met under feeder metering in rural areas. Metering at the distribution transformer level has been 58 per cent in urban areas and 47 per cent in rural areas.

The power ministry has expressed concern about the high outstanding dues from government departments to discoms, which stood at Rs 356.03 billion in fiscal 2018 against Rs 292.86 billion in fiscal 2017. States such as Uttar Pradesh, Maharashtra and Kerala have high government dues, which affect their operations. States would need to make provision from their fiscal space for outstanding as well as fresh accruals, the report notes. Further, the power ministry states that as of June 2018, discoms were yet to issue bonds worth Rs 368.94 billion. The capacity of the market to absorb these bonds would have to be watched, the ministry notes. 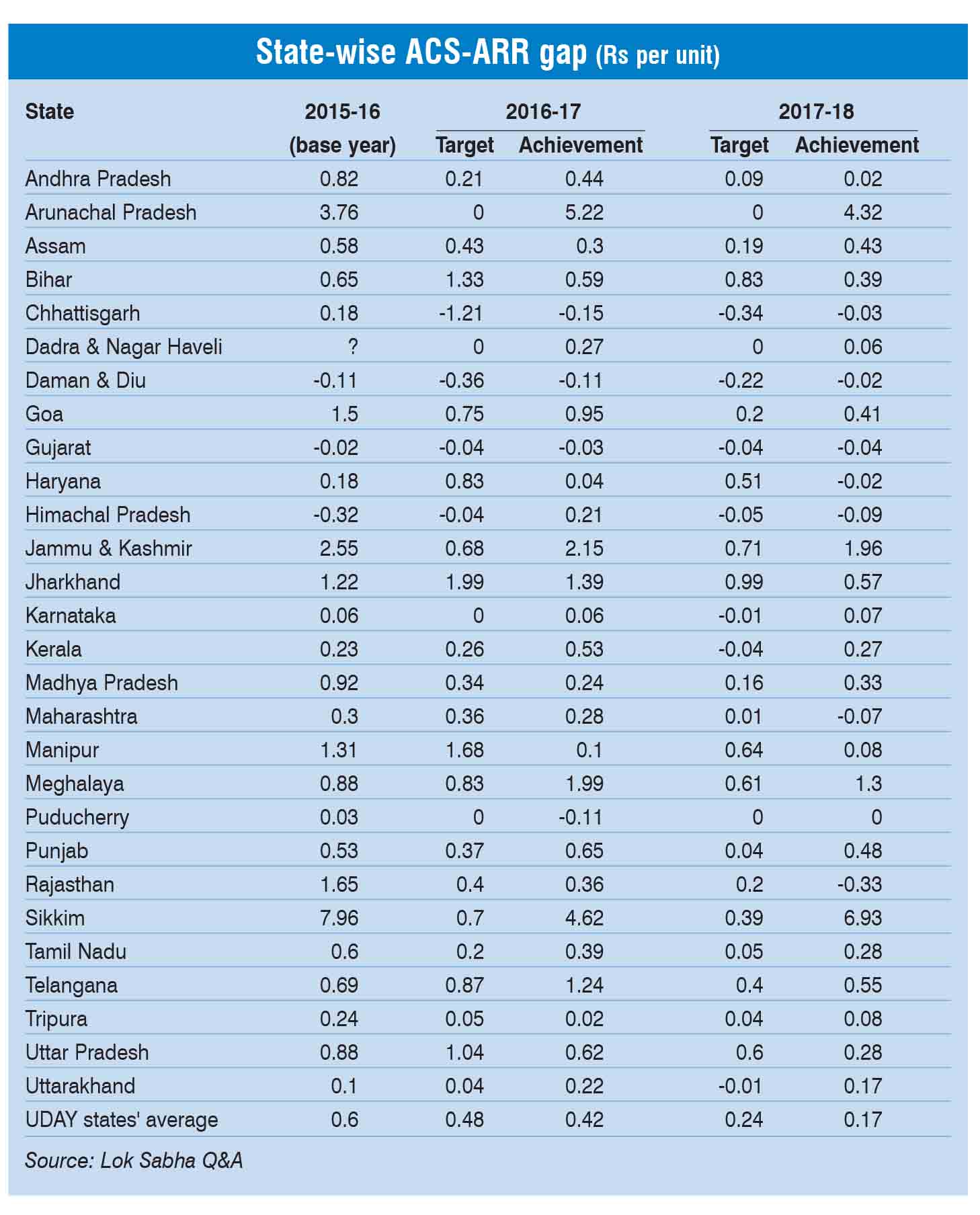 States have also been inconsistent in their tariff hikes, says the ministry. States like Andhra Pradesh, Assam, Chhattisgarh, Maharashtra, Telangana and Uttar Pradesh have not increased their tariff as per the hikes envisaged in the MoUs signed under UDAY for fiscal 2018. Further, the ministry notes that there is scope for further reduction in power purchase costs. States like Assam, Karnataka, Kerala, Madhya Pradesh, Maharashtra, Meghalaya, Puducherry, Tamil Nadu and Uttarakhand have reported an increased cost of more than 5 per cent in the past two years. There are also concerns regarding sales migration impacting discom revenues. The number of open access consumers increased by 4.3 per cent in March 2018 as compared to March 2017. This sales migration has significantly impacted discoms’ revenues as well as operations and power procurement planning because it adds to demand uncertainty, the ministry notes.

In a review meeting with the states and the power minister in February 2019, the states pointed out a number of difficulties in complying with their UDAY targets. In Uttar Pradesh, a key hurdle that the state faces is high power purchase costs, which climbed to Rs 4.48 per unit in the first half of 2018-19 from Rs 3.93 per unit in the first half of 2017-18. Further, as it connects more rural supply areas, the state’s collection efficiency has reported a decline. The state has also requested the power ministry’s intervention for enabling electricity dues from the irrigation department and local bodies to be paid directly to the discoms.

Tamil Nadu has also cited higher power purchase costs due to a shortage of coal supply, and procurement of power from the Indian Energy Exchange at higher prices. In Punjab, a major reason for the high AT&C losses and large revenue gap is the non-receipt of subsidies and outstanding dues from government departments. Further, the state’s establishment costs are high due to pension payment obligations. In Jharkhand, where the revenue gap is still a significant 60 paise per unit, the state has informed that the implementation of the 7th Pay Commission has led to an increase in establishment costs. Some of the better performing states too are facing challenges. For instance, in Gujarat, the state’s AT&C losses in 2018-19 (13.06 per cent as of December 2018) have increased due to an increase in supply to the agriculture sector. Andhra Pradesh’s AT&C losses have also been impacted in 2018-19 (9.75 per cent as of December 2018) due to the non-payment of dues by the irrigation department and local bodies.

Another area of concern is the regulatory assets, which were at a significant Rs 1,400 billion as of March 2018, with a major share accounted for by Rajasthan, Uttar Pradesh, Tamil Nadu and Maharashtra (besides the non-UDAY states of West Bengal and Delhi).

In response to these issues, the power minister has informed that a policy on regulatory assets is currently in the works. It is proposed that regulatory assets would not be permissible beyond a certain timeline and should be liquidated within two to three years of their creation. Other measures have also been proposed, such as all meters being converted to prepaid/smart meters within the next three years. Discoms have also been advised to pay gencos in a timely manner to avoid further increases in pending dues.

UDAY has undoubtedly been one of the best attempts till date to clean up the distribution segment, given that it has made distribution companies healthier than they were before. As the March 2019 deadline looms ahead, it is unlikely that the discoms will meet their targets. The power minister has already indicated that UDAY II could be in the offing. For now, this fiscal’s numbers are keenly being awaited by the industry.