Smart metering is an essential tool to track the electricity consumption of users, and curb aggregate technical and commercial losses of distribution utilities. Smart meters are also expected to help distribution utilities in improving their revenue collection and real-time monitoring of parameters such as power availability, voltage fluctuation and outages to improve power supply quality. Over the years, various small-scale smart metering initiatives and pilot projects have been undertaken by distribution companies, especially private discoms. However, smart meter installation has received a push from the government only in recent years, through policies and programmes such as the National Tariff Policy (NTP), the Integrated Power Development Scheme (IPDS), the Ujwal Discom Assurance Yojana (UDAY), the Smart Meter National Programme (SMNP) and smart grid pilot projects. Recently, the power minister made an announcement to convert all meters into smart-prepaid meters over a period of three years starting April 1, 2019.

Progress under the IPDS

The IPDS, launched in 2014, envisages the installation of smart meters with SCADA systems in all urban areas. A project cost of Rs 8.34 billion and a government grant of Rs 5 billion have been approved for smart metering under the scheme, but as of February 2019, disbursements were nil. Nearly 4.1 million smart meters will be installed under the scheme by 21 discoms across 12 states. The states can either procure them on a stand-alone basis or through an aggregator such as Energy Efficiency Services Limited (EESL) or PFC Consulting.

The Ministry of Power (MoP) has sanctioned 12 smart grid pilot projects with 50 per cent funding from the government. All these projects (excluding the Smart Grid Knowledge Centre at Manesar) involve the implementation of advanced metering infrastructure (AMI), apart from other functionalities such as outage management system, SCADA and demand response.

The pilot projects envisage the implementation of 170,000 smart meters, of which over 132,000 have already been installed. In addition, three smart grid projects under the National Smart Grid Mission (with 30 per cent funding by the MoP), which are under way at Amravati and Congress Nagar in Maharashtra and Chandigarh, also entail AMI/smart meter implementation, but these projects are still at the tendering stage.

EESL is implementing the Smart Meter National Programme under which it aims to replace 250 million conventional meters with smarter versions. In this context, EESL has signed agreements with various state discoms to undertake smart metering projects. To roll out the smart meter initiative, EESL is implementing its proven model of bulk procurement, aggregation of demand and monetisation of savings. It is based on the build-own-operate-transfer model wherein EESL receives a nominal internal rate of return, which is reflected in a mutually agreed, automated payback structure.

The meters will be installed over a period of three years in a phased manner in Uttar Pradesh and Haryana. Smart meters are a part of the overall AMI aimed at better demand response designed to reduce energy consumption during peak hours. The overall AMI solution will also have a system integrator, responsible for meter installation, data storage on cloud, preparing dashboards, etc. 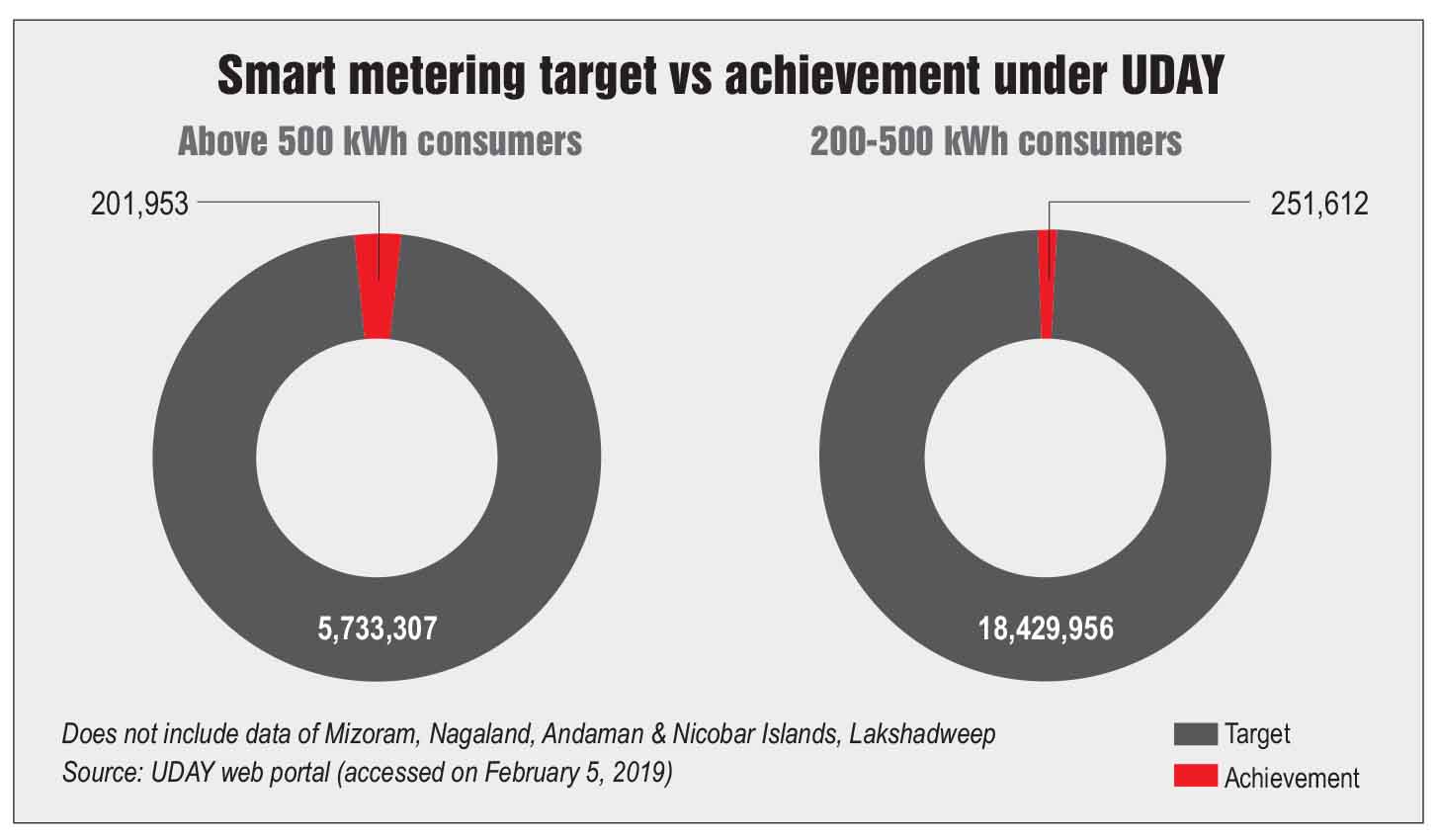 Uttar Pradesh: About 4 million smart meters are being procured through EESL. In January 2019, Madhyanchal Vidyut Vitaran Nigam Limited (Lucknow) launched a tender for procuring 4.5 million smart meters. EESL has begun the implementation in Varanasi and will soon follow this up with similar initiatives in Lucknow and Kanpur

Bihar: About 1.8 million smart meters are being procured by EESL, which will be deployed in 130 towns and adjacent rural areas.

Andhra Pradesh: An MoU was signed with EESL for 1.7 million smart meters.

Haryana: About 1 million smart meters are being procured through EESL. These will be installed in Gurugram, Faridabad, Hisar, Karnal, Panipat and Panchkula in a phased manner over three years.

Rajasthan: About 281,000 smart meters have been awarded by Jaipur Vidyut Vitran Nigam Limited.

Delhi: In January 2019, EESL completed the implementation of a smart metering project for the New Delhi Municipal Corporation (NDMC) under which 50,000 smart meters have been installed and integrated with the NDMC IT legacy system. The adoption of smart meters is expected to result in total annual savings of Rs 124.7 million by NDMC.

Other states: There is a growing demand for smart meters in Jharkhand, Karnataka, Gujarat, Andhra Pradesh and Tamil Nadu, which have also expressed interest in implementing smart metering projects with EESL.

The tardy progress of smart metering under UDAY is a result of various operational challenges encountered by distribution utilities. The scheme requires the implementation of smart meters on the basis of electricity consumption (for users above 500 kWh of consumption and for 200-500 kWh consumption). Such consumers are often spread across the state, which hampers the establishment of communication networks, data integration and energy auditing. In order to overcome these issues, smart metering can be carried out for all consumers associated with a particular feeder as recommended by the India Smart Grid Forum. Besides operational issues, high investment costs of smart meter installations, along with a lack of expertise among discoms, are hampering smart meter roll-outs.

In addition, market readiness, in terms of manufacturing capacity and deployment capacity, is essential to achieve smart meter roll-out targets. It is estimated that the industry capacity for metering is around 50 million per annum, including a smart metering capacity of 25 million per annum. With the government’s intent of replacing all conventional meters with smart meters, the manufacturing capacity needs to be ramped up significantly. Further, as more and more smart meters go online, the challenge of managing these and making use of the data they gather is a humongous task that calls for the implementation of disruptive technologies.