The Bureau of Energy Efficiency (BEE) launched the Perform, Achieve and Trade (PAT) scheme in 2012, under the National Mission on Enhanced Energy Efficiency, to improve the efficiency of energy-intensive sectors in the country. PAT is a regulatory instrument aimed at reducing the specific energy consumption in energy-intensive industries and creating a market-based mechanism by converting these energy savings into a tradable instrument, energy saving certificates (ESCerts), to increase the overall cost-effectiveness.

PAT is a multi-cycle scheme with each cycle spanning over a period of three years. The first cycle began in 2012 and concluded in 2015. Around 1.3 million ESCerts were traded under the first cycle at a value of nearly Rs 1,000 million. The second, third and fourth cycles are currently under implementation and will conclude in 2019, 2020 and 2021, respectively. The second cycle covers more consumers and newer sectors as compared to the first cycle. However, the number of consumers covered in the third and fourth cycles is much lower than that in the second cycle. This can be attributed to the overlap in the implementation periods of the cycles. In the first cycle of PAT, the targets were exceeded by more than 30 per cent, leading to energy savings of about 8.67 million tonnes of oil equivalent (mtoe). The second, third and fourth PAT cycles are expected to yield over 10 mtoe of savings.

A look at the PAT scheme, the targets under the scheme and the ESCert trading mechanism…

The BEE is the overall administrator of the programme, the Power System Operation Corporation is responsible for the centralised ESCert registry, and the Indian Energy Exchange (IEX) and Power Exchange of India Limited manage the ESCert trading. The Central Electricity Regulatory Commission (CERC) is the market regulator of the scheme. It defined the terms and conditions for dealing in ESCerts in May 2016. It also gave approvals for transaction of ESCerts, fees and charges of ESCerts registry, and IEX rules and by-laws. 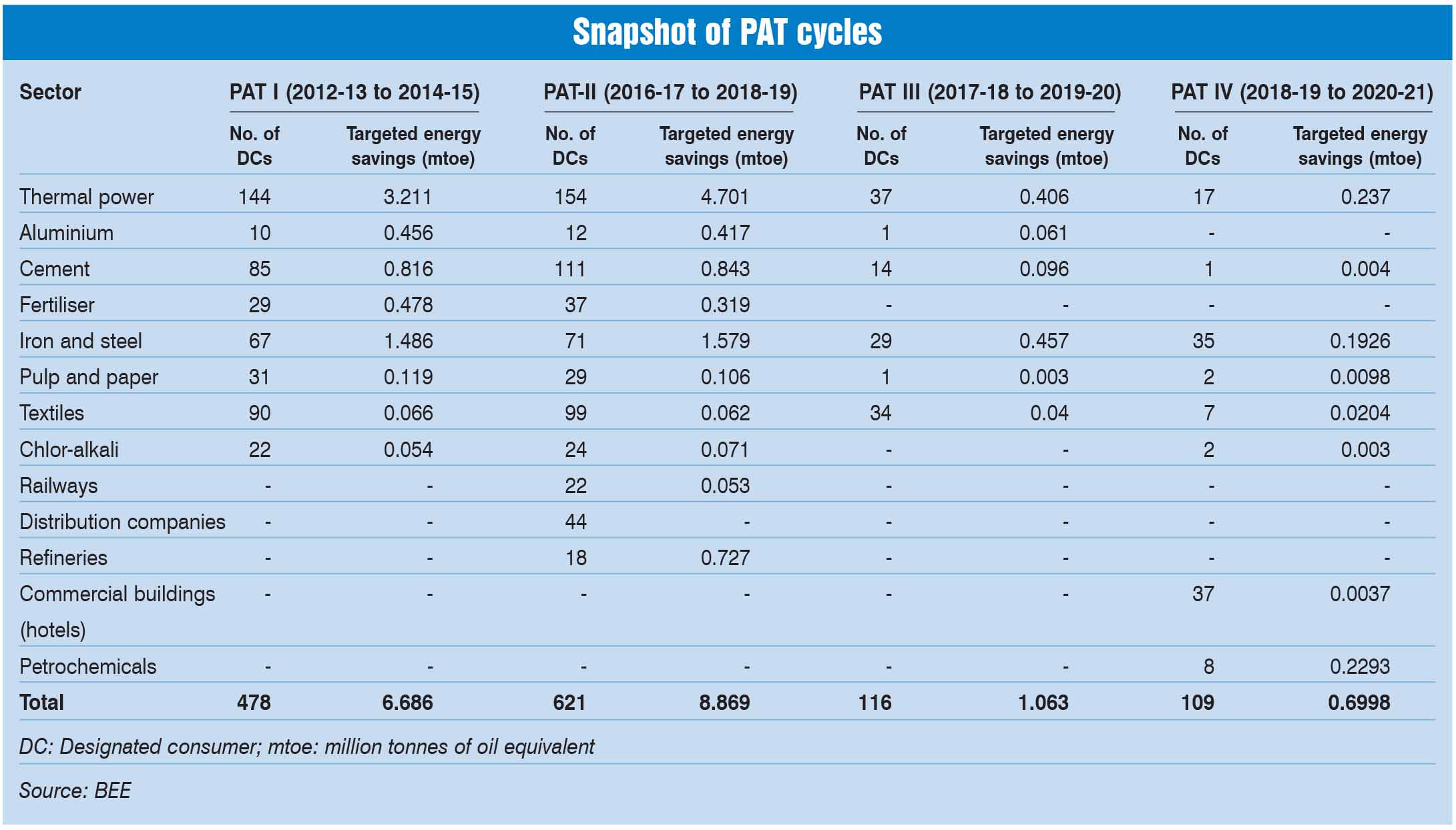 The first PAT cycle (2012-13 to 2014-15) covered 478 industrial units across eight sectors (aluminium, cement, chlor-alkali, fertiliser, iron and steel, paper and pulp, thermal power plant and textiles). These sectors accounted for 25 per cent of GDP and about 45 per cent of India’s primary energy consumption annually. Under the first cycle, a target of 4.05 per cent reduction in energy consumption, totalling 6.686 mtoe, was set for these industries. It was overachieved by almost 30 per cent, recording energy savings of 8.67 mtoe. Except thermal power plants, all sectors overachieved their targets. The thermal power segment missed the prescribed target by 5 per cent (the target was 3.21 mtoe while the segment achieved 3.06 mtoe). Overall, the sector contributed to nearly 35 per cent of the target, which was the maximum contribution by any industry. Further, the sector recorded energy savings of about 31 million tonnes of CO2 emissions and financial savings of Rs 9.5 billion. 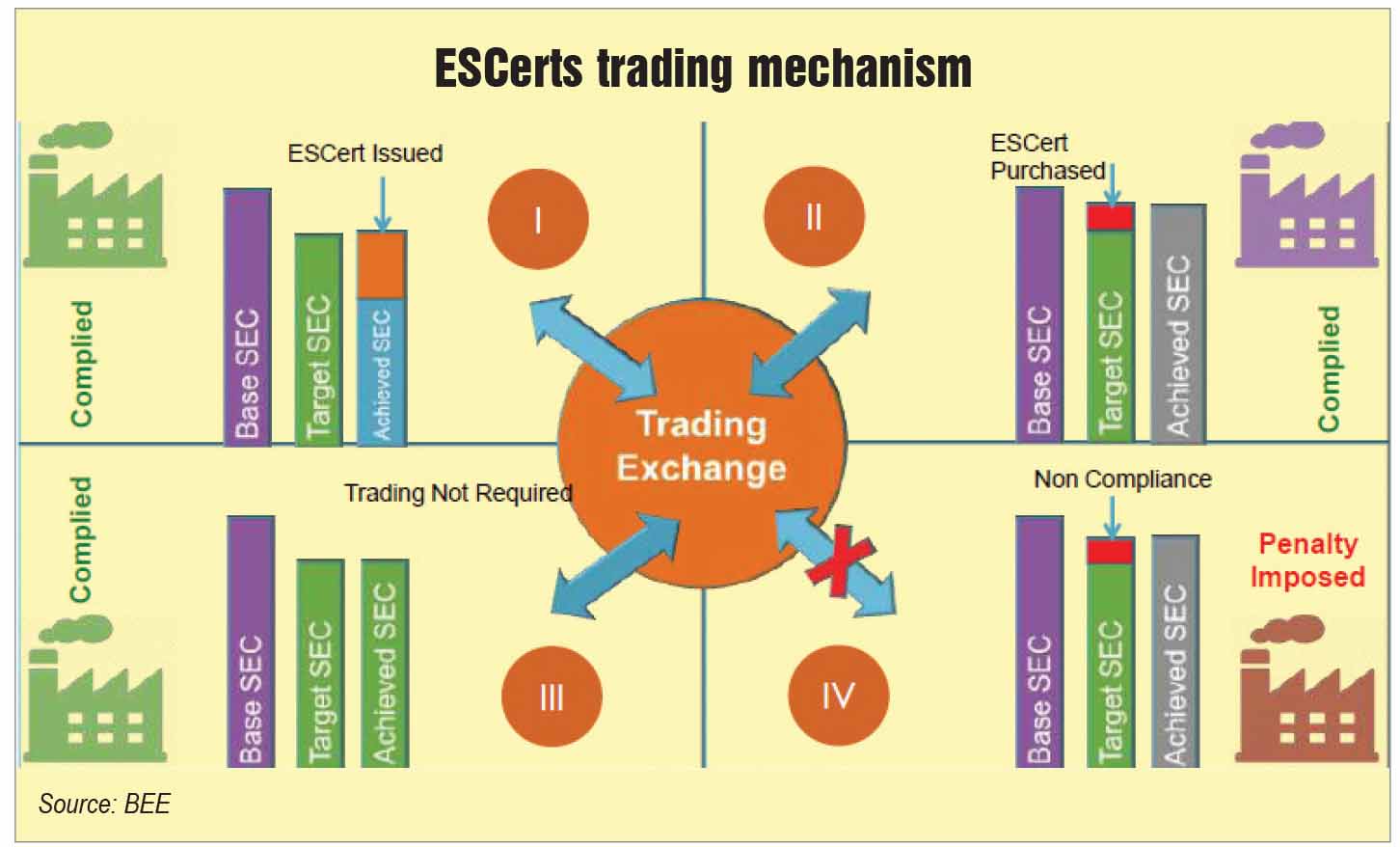 Under the PAT scheme, industrial units are obligated to meet their energy efficiency targets either by taking energy efficiency measures themselves or by buying ESCerts from other industries. ESCerts are issued when energy efficiency improvements surpass the targets. For every one mtoe of improvement in targets, one ESCert is issued. To enable trading, the CERC approved the ESCerts transaction procedures in February 2017. In March 2017, it issued an order on the fees and charges of ESCerts registry. Later, in May 2017, it approved the amendments to the by-laws and rules of the power exchanges under the CERC’s power market regulations to enable ESCerts transactions on the power exchange platforms.

The energy savings of the DCs under PAT Cycle I were converted into tradable ESCerts by the Ministry of Power in February 2017. In total, 3.82 million ESCerts were issued to 306 DCs on achievement of their energy saving targets while 110 DCs, which could not meet their energy saving targets, had to purchase about 1.42 million ESCerts for compliance. ESCerts trading at the power exchanges commenced on September 26, 2017 and was concluded on January 16, 2018. These ESCerts were traded every Tuesday at the IEX through a double-sided uniform price auction. The total volume of ESCerts traded was about 1.29 million (around 90 per cent of the total obligation) amounting to about Rs 1,000 million. The market price discovered during the 17 trading sessions varies widely given that there are no floor or forbearance prices. These ranged from Rs 200 per ESCert to Rs 1,200 per ESCert. 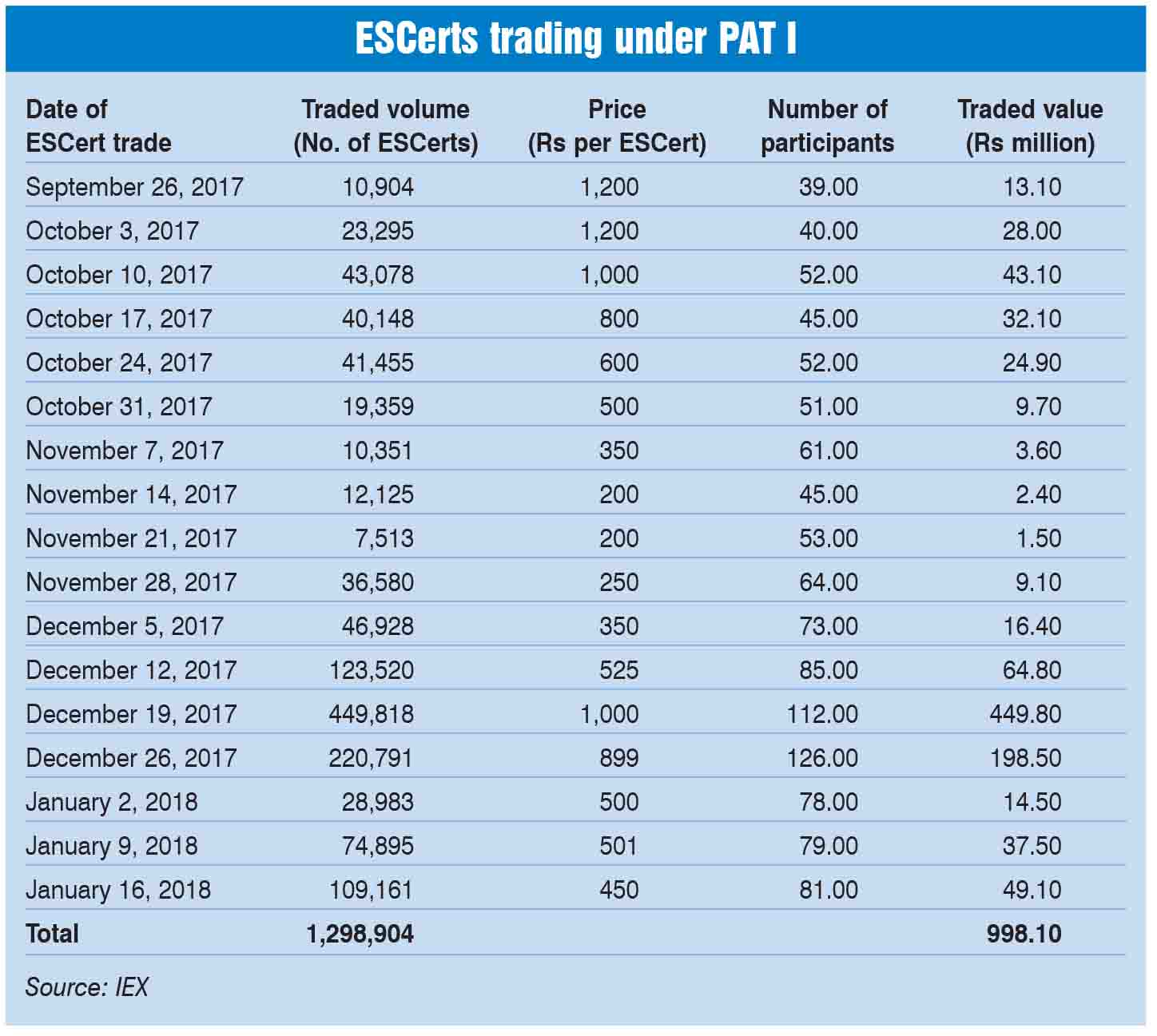 While the performance under the first cycle was much lauded, the industry has raised concerns regarding the modest targets and low level of penalties. In addition, the consumers are facing challenges in terms of shutdowns due to external factors, low capacity utilisation, addition of new line/unit (in process industries and power generation), fuel and raw material quality, etc. This is affecting their performance. Apart from addressing these issues, there is a need to implement a more stringent enforcement mechanism in order to achieve the desired results.

Further, the PAT programme currently covers DCs, which account for about only half of the industrial energy consumption. There is a need to scale up the programme to cover at least 80 per cent of the industrial energy consumption. This may be done by widening the scope of the scheme by including more sectors such as transport, aviation and shipping. A voluntary PAT programme can also be initiated for consumers not identified under the programme. The non-DC participants can be allowed to access the ESCerts market. They may also be provided favourable tax benefits for enhancing the energy efficiency levels in the sector.