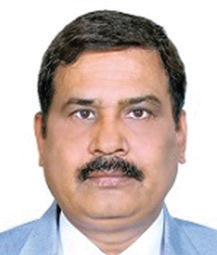 V.K. Singh joined the board of NEEPCO as director, technical, in March 2016. He is expected to assume charge as chairman and managing director of NEEPCO later this year. He hopes to work towards transforming the organisation and making it comparable to the best in the sector.

Singh, an M.Tech from IIT Kharagpur, has over three decades of experience in hydropower development. In the past, he has been responsible for preparing pre-feasibility reports for hydro projects under the government 50,000 MW Hydro Initiative. He has also undertaken preparation of the electromechanical design and engineering of NHPC’s Chamera Stages II and III, Teesta Low Dam III and IV, Nimmo Bazgo and Chutak hydro projects. Prior to joining NEEPCO, Singh was executive director (Uttarakhand power stations) at NHPC.

Singh remarks that although the thermal and renewable energy segments have gained traction, hydro development has suffered a setback. This has been primarily due to issues pertaining to land acquisition and local resistance. “In a country like India that has large demographic diversities, the right energy mix is a must, including distributed generation. There is a need to ensure that hydro grows at a fast pace through policy interventions,” he says.

Looking back, he recalls his most memorable assignments as the construction of NHPC’s 540 MW Chamera I project in Himachal Pradesh, the restoration of the 280 MW Dhauliganga HEP in the aftermath of the Uttarakhand floods in 2013, the commissioning of NEEPCO’s 60 MW Tuirial and 110 MW Pare HEPs along with the completion of the 600 MW Kameng HEP. “While Chamera I posed technical challenges of the highest order, the Dhauliganga restoration tested my strategic planning and implementation abilities to the hilt,” he says.