Despite immense potential and numerous benefits, the hydropower segment has remained under-developed. In recent years, it has witnessed a rather sluggish growth with less than 10,000 MW of capacity added since 2008, at an around 2.3 per cent compound annual growth rate (CAGR). As against this, the total installed generation capacity has increased at 10 per cent, leading to a decline in the shade of hydropower in the country’s total installed capacity, from almost 25 per cent as of March 2009 to 13 per cent as of March 2018. Further, it contributes only around 13 per cent to India’s total electricity generation.

As of January 31, 2019, 37 hydropower projects (above 25 MW) with an aggregate capacity of 12,178.5 MW were under construction. Of these, 14 projects with a capacity of 4,850 MW are currently stalled due to financial constraints and other issues such as public agitation, poor geology, rehabilitation and resettlement (R&R) issues, water-sharing issues among states, and delays in procuring environmental and other clearances.

In a major policy development, the government has approved a slew of measures to promote hydropower in India. These include providing renewable energy status to large hydropower (more than 25 MW) projects, notifying hydropower purchase obligation (HPO) as a separate entity within the non-solar renewable purchase obligation (RPO), revising the tariff determination methodology, and extending budgetary support for flood moderation and enabling infrastructure. These much-awaited policy measures are expected to address some of the core issues facing the segment and make it more competitive and viable.

The segment has not seen much interest from the private sector, with only 7.5 per cent of the total hydro capacity being commissioned by private players. Meanwhile, the highest share (65.81 per cent) in the total hydro capacity is accounted for by the state sector. Region-wise, most of the hydropower capacity (almost 70 per cent) is located in the northern and southern regions. Ironically, despite having the maximum potential (59 GW), the north-eastern region accounts for only 3 per cent of the capacity (1.42 GW). 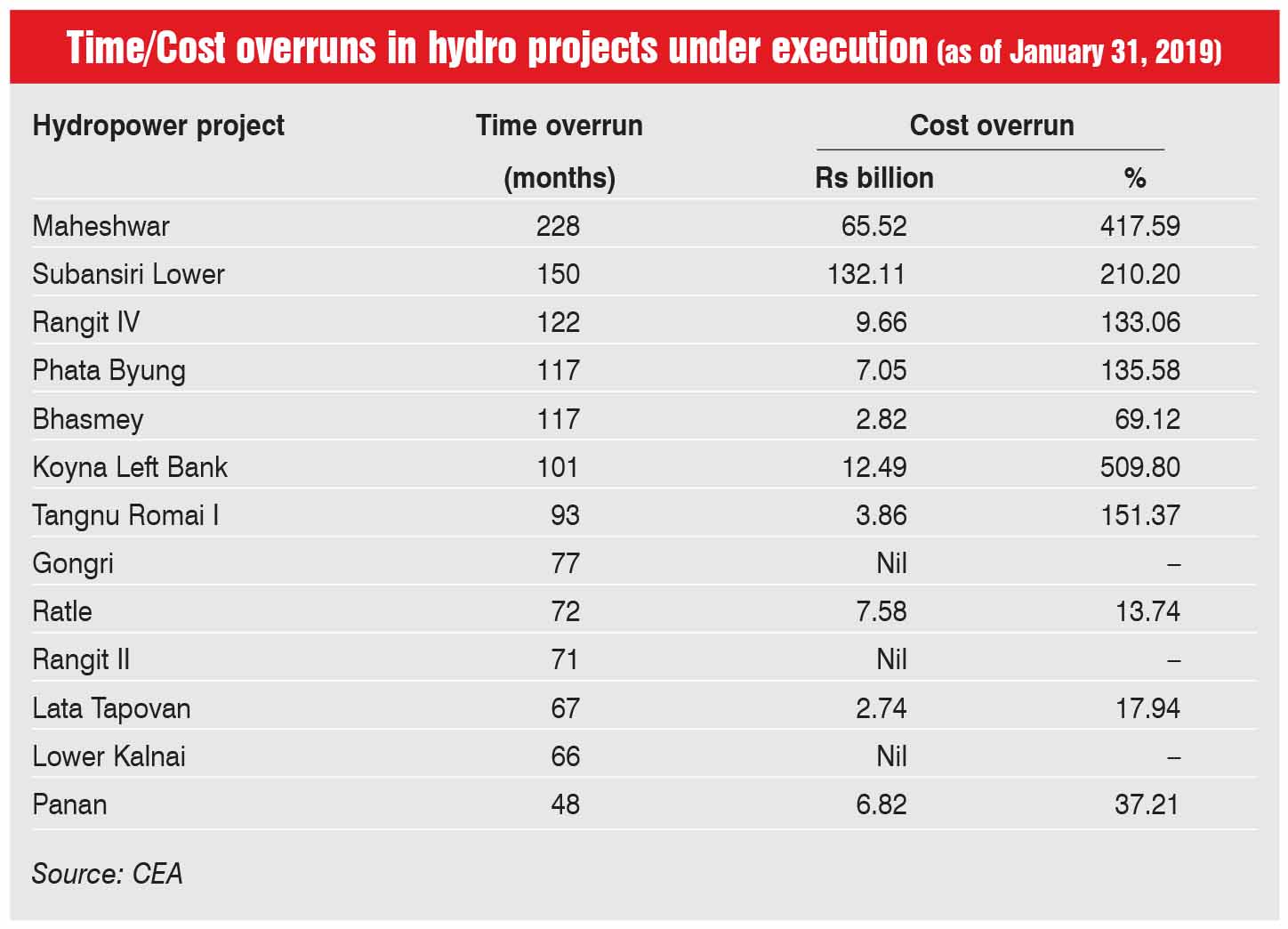 According to the CEA, about 12,178.5 MW of hydro capacity, currently under construction across 37 projects, is scheduled for commissioning by 2024-25. Over half of the under-construction capacity (6,715 MW) is being implemented by the central sector. The state and private sectors have 2,337.5 MW and 3,126 MW of capacity under implementation respectively. Some of the big under-construction projects are NHPC’s 2,000 MW Subansiri Lower in Arunachal Pradesh, THDC India’s 1,000 MW Tehri pumped storage plant in Uttarakhand, and the 1,000 MW Pakal Dul project being implemented by a joint venture (JV) of NHPC, the J&K State Power Development Corporation (JKSPDC) and PTC India.

In addition, the government approved Rs 42.87 billion in investment for the construction of the Kiru hydro project (624 MW) on March 7, 2019. The project will be implemented by Chenab Valley Power Projects Private Limited, a JV of NHPC, JKSPDC and PTC India Limited with equity shareholding of 49 per cent, 49 per cent and 2 per cent, respectively, and is scheduled for completion in four and a half years.

About 40 per cent of the under-construction capacity (4,850 MW across 14 projects) is currently stalled due to various reasons (cash flow issues, agitation of social activists, pending approvals of revised capital expenditure, R&R issues, etc.) and the actual commissioning will depend on when works resume. These projects have witnessed significant time and cost overruns (see table). The commissioning of the Maheshwar hydroelectric project (HEP) has been delayed by almost 20 years (mainly due to developer SMHPCL’s fund constraints and has exceeded the original approved cost of Rs 15.69 billion by over 400 per cent.

PFC acquired 51 per cent stake in equity in June 2016 and has now filed an application in the National Company Law Tribunal to seek insolvency resolution. Subansiri Lower, the biggest under-construction project, too has faced severe delays due to agitation by social activists. Various groups and committees have been formed to analyse the issues related to the project. The MoEFCC had constituted an expert appraisal committee in November 2017 for final appraisal of the project, but the report is still awaited. With respect to time overruns, the other stalled projects have been delayed by 4-10 years.

Meanwhile, the stalled Teesta VI HEP has been secured by NHPC Limited and it will execute the remaining work on the project. Earlier, Lanco Teesta Hydro Power Limited was supposed to develop the project; however, the company could not complete it due to financial constraints. In March 2019, the Cabinet Committee on Economic Affairs (CCEA) sanctioned the investment for the acquisition of the project to NHPC, which will infuse Rs 57.5 billion into the project. It aims to complete the project in five years. Giving a fresh lease of life to the Ratle HEP, another project which had been stalled for over six years, NHPC signed an MoU on February 2, 2019 with JKSPDC for executing the project. 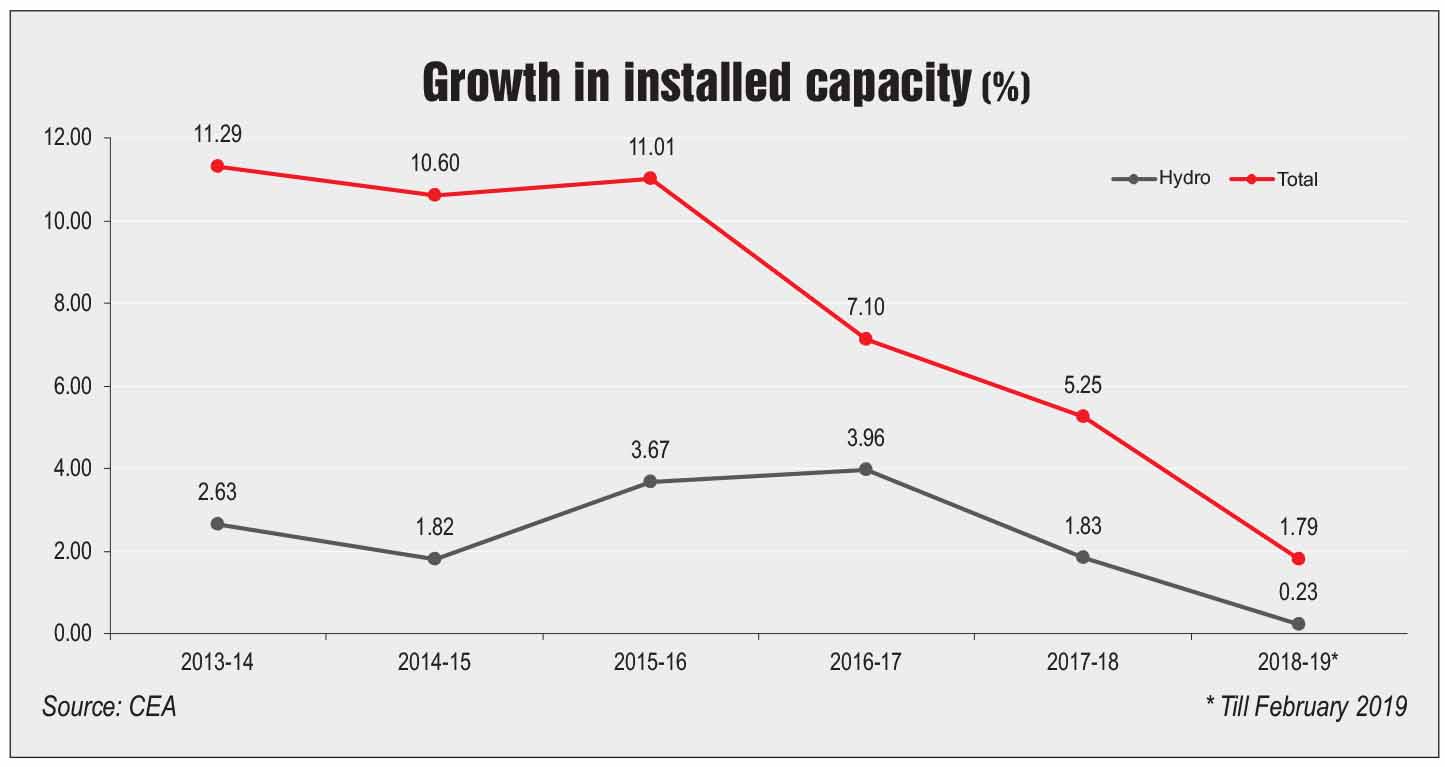 Earlier this month, the government approved a number of measures to address the issues facing the hydropower segment. According to the MoP’s notification of March 8, 2019 (the discussions for which began in 2016), large hydro projects of more than 25 MW capacity will now be considered as renewable energy.

Earlier, hydro projects of only up to 25 MW of capacity were considered as renewable energy. However, large hydro projects will not be automatically eligible for any differential treatment for statutory clearances such as forest clearance and environmental clearance, related impact assessment and carrying capacity studies, etc. that are available to projects of up to 25 MW of capacity. Also, the MoP will continue to be the administrative ministry for these plants unlike small-hydro plants that are administered by the Ministry of New and Renewable Energy.

According renewable energy status to large hydro projects will help the segment attract more capital and also enable the existing projects to sell more power. Further, the HPO has been notified as a separate entity within the non-solar RPO. This will compel the state discoms to meet a certain proportion of their total power requirement through hydro power. The HPO targets are yet to be notified. Amendments will also be made in the tariff policy and tariff regulations to operationalise the HPO.

The government has increased the debt repayment period from 12 years to 18 years and the project life from 35 years to 40 years. This move is expected to make hydro power more competitive by lowering the cost of generation, which, so far, has been higher in the initial years due to debt repayment requirements. The government has also allowed a 2 per cent escalation in hydropower tariff subject to approval of appropriate regulatory commissions.

The notification provides for budgetary support for setting up enabling infrastructure (roads, bridges, etc.) for hydro projects as well as for the flood moderation for storage-based HEPs. With this, the cost of enabling infrastructure will be excluded for the purpose of tariff determination and hydropower tariffs will become more competitive. The amount of funds to be released will be decided on a case-by-case basis, following the appraisal of each project, by the Public Investment Board/CCEA. However, the upper limit of the grant for this infrastructure has been set at Rs 15 million per MW for projects up to 200 MW, and at Rs 10 million per MW for projects above 200 MW. 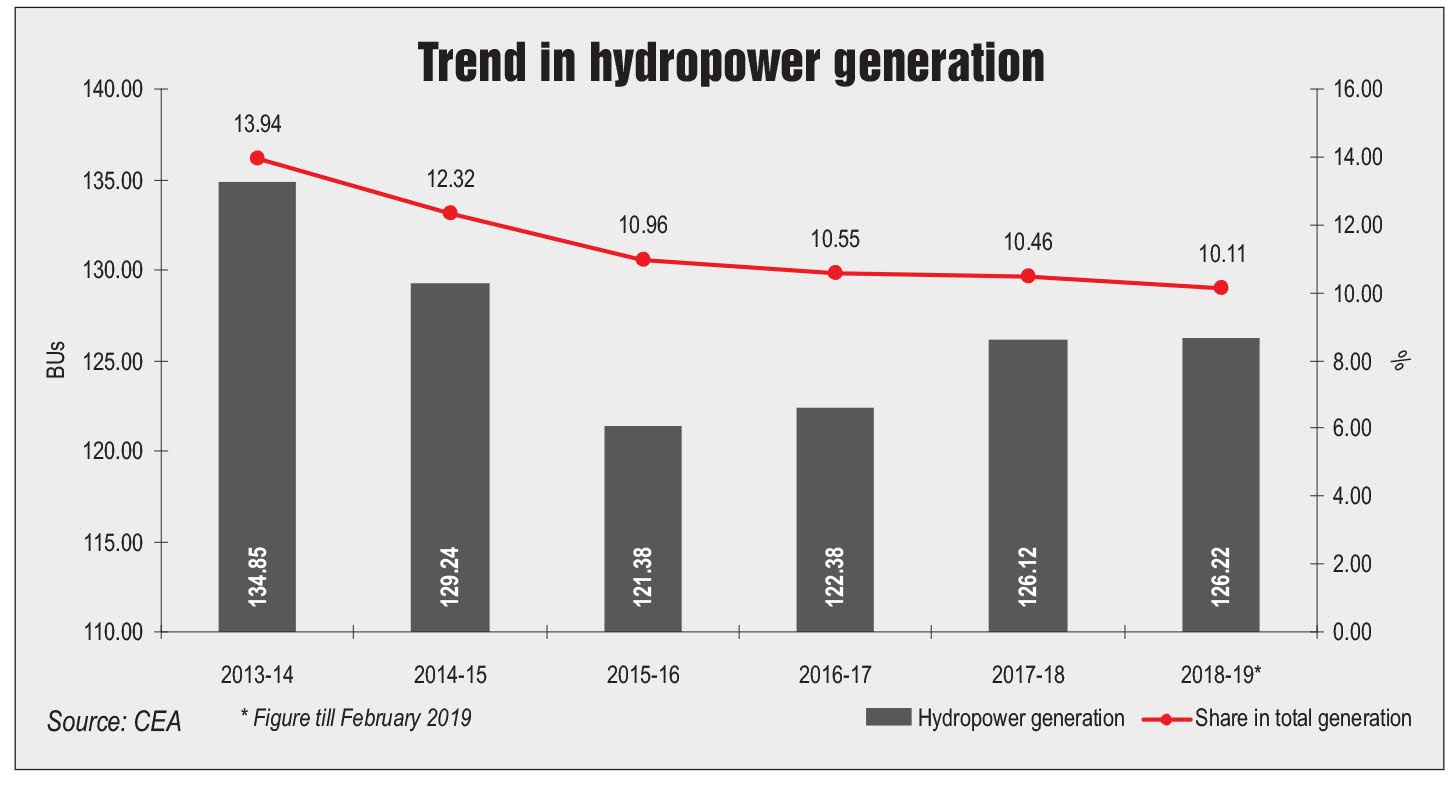 While the segment continues to grapple with the challenges related to land acquisition, R&R, environmental clearances, long gestation period, and geological and hydrological surprises, there is clearly a huge potential to be tapped.

As on date, more than 60 per cent of the hydropower capacity potential is yet to be taken up for development. Further, the need for hydropower is increasing more than ever in view of the clean energy commitments and the growth in infirm power (solar and wind). Owing to its quick ramp-up time, hydropower makes for a good source for peaking as well as balancing power.

To this end, in July 2018, the CERC approved a pilot project, Fast Response Ancillary Services, for hydropower.  While the pilot is recommended for central sector hydro stations, its scope will be widened eventually. The recent hydropower notification is also expected to provide the much-needed fillip to the segment. However, strict implementation will be necessary for achieving the desired outcomes going forward.