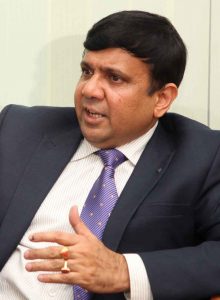 “We are focusing on aggressively expanding renewable generation”

Andhra Pradesh’s power sector has seen significant progress since the state’s bifurcation in 2014.  During this period, its renewable energy capacity has grown by about six times, transmission and distribution (T&D) losses have declined considerably, and power supply has been ensured to all households. With an investment of Rs 800 billion lined up for the development of 10 GW of renewable energy capacity and strengthening of T&D networks, the state looks forward to emerging as a front runner in the power sector in the coming years. In an interview with Power Line, Ajay Jain, principal secretary, energy, Infrastructure and Investment Department, Government of Andhra Pradesh, discusses the achievements, plans and outlook of the state’s power sector…

What, according to you, has been the biggest achievement of Andhra Pradesh’s power sector in the past few years?

In the renewables segment, we have added almost 6,000 MW of capacity in the last four to five years. As a result, the state’s installed renewable energy capacity has grown from 1.3 GW in 2013-14 to 7.2 GW as of March 2019. Wind holds a share of 3 GW, and solar of about 2.8 GW in the capacity addition. Further, four solar parks aggregating 4 GW are under development and 2,050 MW of capacity has been commissioned;  the balance is under construction. The state has released a new policy on wind-solar hybrid systems with storage. A tender for 600 MW of such projects has also been released.

Significant progress has been made by the state on the energy conservation and efficiency fronts. We started with the replacement of conventional bulbs with LEDs for domestic/residential consumers, and so far about 24 million LEDs have been distributed. Subsequently, we replaced conventional bulbs in all 110 urban local bodies, in association with Energy Efficiency Services Limited (EESL). About 650,000 street lights were replaced with LEDs in urban areas. Now we are focusing on LED distribution in villages. It is targeted to install LEDs in 13,000 gram panchayats across the state, of which over 10,000 have already been covered and the remaining will be covered by March 31, 2019. Further, we are  replacing  conventional pumpsets with energy efficient ones, and about 50,000 pumpsets have been replaced till now. Finally, the state has made tremendous progress in reducing T&D losses which stand at 9.7 per cent today – one of the lowest amongst distribution businesses in the country.

What is the planned generation capacity addition across the fuel types for the next two to three years?

We are focusing on aggressively expanding renewable generation. As per the state policy, we plan to reach 18 GW of installed renewable energy capacity by 2022. Accordingly, about 10 GW of renewable capacity addition is planned for the next two to three years. By 2022, we will be sourcing 30 per cent of the total electricity from renewables, and by 2025, this share is expected to increase to 40 per cent vis-à-vis 22 per cent at present.

Apart from renewable energy, there are supercritical units of 800 MW capacity each under development at Krishnapatnam and Vijayawada. In addition, we have a 960 MW hydroelectric plant (HEP) at Polavaram in the pipeline.  It is an irrigation-cum-power project of national importance, and would comprise 12 units of 80 MW each. Further, we have called for bids for procuring 500 MW of thermal power. Also, the state plans to install 50,000 grid-connected solar pump sets in the next five years. Besides reducing electricity consumption, the pump sets would help in lowering the subsidy requirement by the agricultural segment.

How is the state’s power demand expected to grow in the next few years?

Power demand in Andhra Pradesh has been growing at an average rate of 9-10 per cent in the past three to four years. All the households in the state have been electrified now, which  results in higher demand growth in the domestic segment. Further, construction of metro rail, growth in real estate, and increasing industrialisation are driving up the demand in the commercial and industrial segments. Also, in the agricultural segment we have been releasing almost 70,000 connections every year, leading to a further increase in demand. The state’s GDP itself has been growing at double digits, so naturally the electricity demand is expected to increase. In order to meet the growing demand, the state has already tied up significant renewable and conventional energy capacities.

How would you rate the performance of the state discoms in various central government schemes?

As far as the Integrated Power Development Scheme and the Deendayal Upadhyaya Gram Jyoti Yojana are concerned, the state discoms have done very well. We have almost completed all the projects, barring the installation of smart meters. All other projects, such as those related to gas-insulated switchgear substations, and high voltage distribution systems, have been completed.

On the smart metering front, the state has signed an MoU with EESL to install 1.7 million smart meters. All consumers with consumption over 200 MUs will be covered under the smart metering initiatives. Unfortunately, some issue between EESL and its vendor has delayed the implementation, but it is expected to be resolved soon, following which the phase-wise installation of smart meters will take place.

Under the Ujwal Discom Assurance Yojana (UDAY) too, state discoms have performed well across all parameters, except in the area of receivables. This is mainly owing to the delay in disbursement of agricultural subsidy to discoms by the government, as well as delays in electricity payments by various government departments. As a result, state discoms have defaulted in their payment to electricity generators, including NTPC Limited.

To address this issue, the state government has directed Andhra Pradesh Power Finance Corporation Limited to raise bonds worth Rs 50 billion. The bonds would be backed by an unconditional and irrevocable guarantee by the state government. The funds raised through the bonds will be used to clear the dues of generators.

What are the state’s initiatives to promote Electric Vehicles and their charging infrastructure?

EVs present a huge opportunity to shore up power demand, and Andhra Pradesh is taking steps to promote their adoption. As a first step, all government vehicles will be replaced with EVs. As per an agreement with EESL, 10,000 electric cars and 4,000 chargers will be supplied to various departments of the Andhra Pradesh government.

The discoms have started setting up charging infrastructure on the premises of government offices, state departments, district courts, etc. Out of the 100 charging stations planned, 50 have already been established. The state’s road transport corporations are also planning to adopt EVs. The Andhra Pradesh Electricity Regulatory Commission has already approved a separate tariff category for EV charging stations.

What are the state’s plans for development of power evacuation infrastructure for renewable energy?

Most of the renewable energy potential in Andhra Pradesh is in the Rayalaseema belt. For power evacuation from this region, the Green Energy Corridors I (GEC- I) project is under way, with 40 per cent funding from the Germany-based development bank KfW and 40 per cent grant from the central government. Various transmission lines and pooling substations under the project will be commissioned progressively by 2020. The central government has also approved GEC-II with a similar funding pattern to evacuate power from upcoming solar parks, including those in Andhra Pradesh.

What investments are expected in the state’s power sector over the next few years?

Most of the investment in the state’s power sector will be in the renewables segment, given that we have a tall target to accomplish. About 10,000 MW of renewable energy capacity will be added in the next two to three years. Even if we take a capital cost of Rs 50 million per MW, it translates into an investment of Rs 500 billion. In addition, an investment of Rs 200 billion-Rs 300 billion will be made in the T&D segment. So, we can expect investments up to Rs 800 billion approximately in the state’s power sector.

What are the main challenges facing the power sector in Andhra Pradesh?

The biggest challenge is to improve the financial performance of state discoms and reduce the cost of power supply. This holds true for the entire country and not just Andhra Pradesh. Though power supply is secure now, the tariffs have to be made more competitive. If our industries have to compete with industries in other countries like China and Malaysia, industrial and commercial tariffs cannot continue to remain high. Domestic and agricultural tariffs too have to be made more sustainable, by taking steps to reduce the average cost of supply, as subsidies present a huge challenge for state governments. If the cost of power supply comes down to a respectable level, subsidies will also decrease.

What is your outlook for Andhra Pradesh’s power sector?

I think the state’s power sector is going in the right direction, with ample focus on renewables. But our cost of power supply is on the higher side, so the challenge is to reduce the cost of power while adding more renewables. The state utilities will continue to focus on providing power to each and every household. Going forward, we will strive to provide quality power at an affordable price.