Coal is the most dominant fuel for power generation in India. However, while coal production has been growing, it has remained much below the demand, leading to increased imports. Owing to the shortage in domestic coal supply, power plants have been under pressure, with the number of plants having critical/supercritical coal stock going up to more than 30 in October 2018. The government has taken several initiatives for enhancing the sector’s performance and promoting investments such as approval of commercial coal mining, rationalisation of coal linkages, improvement in coal transport logistics. A look at the performance of the coal sector…

In 2018-19 so far (till February 2019), the total coal production stood at 638.46 mt, marking an increase of 8 per cent year on year. Of this, 83.7 per cent was contributed by CIL, 9.2 per cent by SCCL and the remaining by captive coal mines. Coal offtake during the same period stood at 609.8 mt, marking a year-on-year increase of 4.5 per cent. With regard to imports, the power sector imported 14 per cent less coal than that in the corresponding period of the past year.

Coal availability in the power sector

Based on the total number of coal-based power plants as of December 2018 and the generation target for 2018-19, the daily average coal requirement of power plants is 1.79 mt per day. The average consumption of power plants during 2018-19 till December 2018 was 1.72 mt per day, which is 0.07 mt per day less than the requirement. The primary reasons for this are low availability of coal at power plants owing to evacuation and transportation constraints, sudden increase in coal demand, and decline in coal output from certain mines due to flooding and heavy rains. This is reflected in the coal stock position across power plants in the country. As against a normative requirement of 22 days, power plants had coal stocks of 9-10 days between April and August 2018 (as of the 15th day of every month). In October 2018, this declined to 6.2 days and the Indian Captive Power Producers Association requested the government to take steps for addressing the coal issue to ensure sustained operations.

The Ministry of Power (MoP) has taken a number of steps for augmenting coal supply to power plants. These include introducing the “flexibility” component in the utilisation of domestic coal by gencos across its power generating stations, awarding coal linkages under the Scheme for Harnessing and Allocating Koyala (Coal) Transparently in India (SHAKTI), expediting clearance processes and providing assistance in land acquisition. The MoP, with support from the Ministry of Railways, has also been working on improving coal transportation.

Earlier, in July 2018, the MoP had written to the states, notifying the issue of coal shortage and asking them to import coal to meet the demand. The issue of coal shortage will be resolved once new mines commence production but this may take two to three years. Further, the Central Electricity Authority has called for coal imports by thermal power plants to compensate for domestic shortages.

As of March 2019, the coal stock has increased and it is enough to run power plants for 17 days, however, it remains much below the normative requirement. Meanwhile, the number of power plants with critical/supercritical coal stock has come down to zero. It varied from 13 to 33 till December 2018. 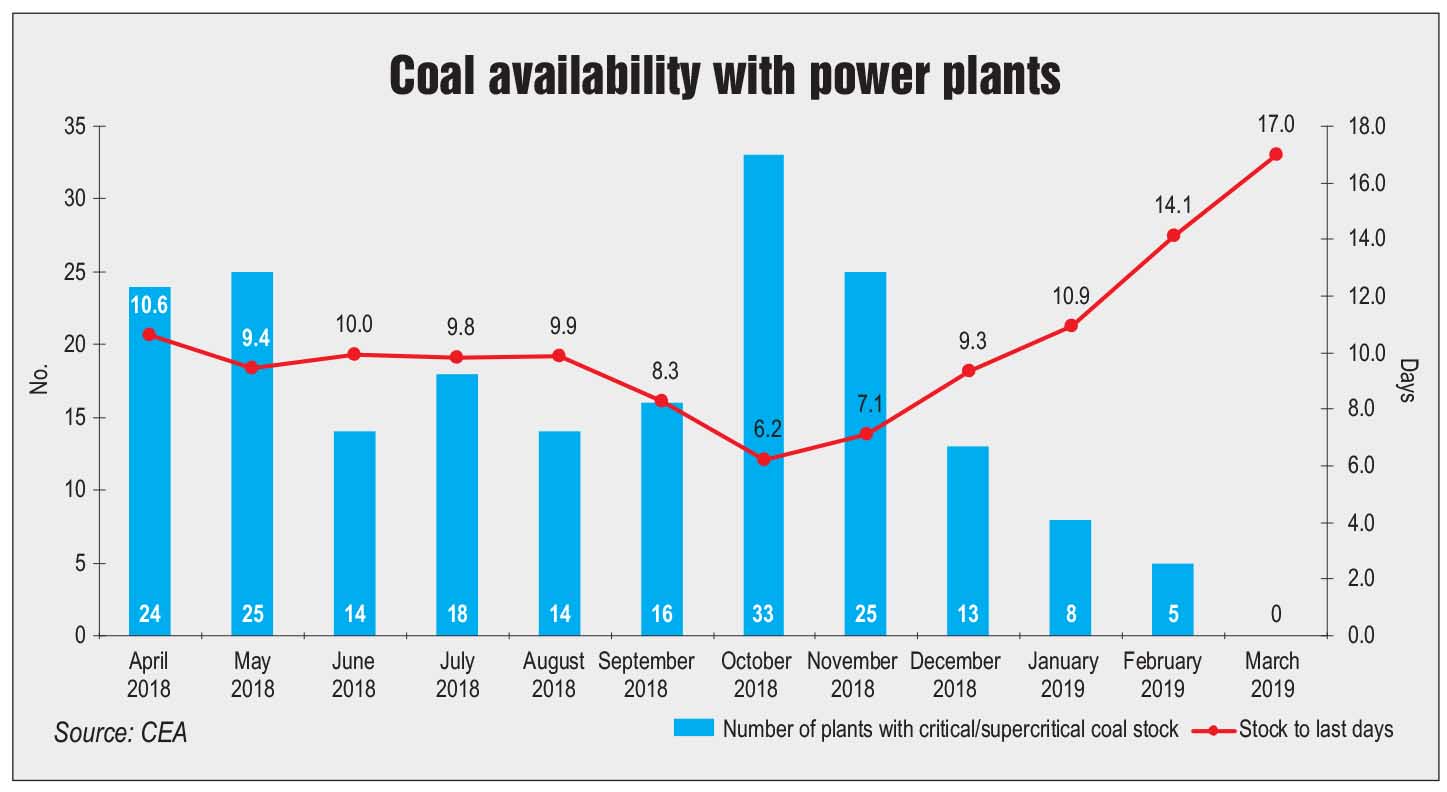 In February 2019, the Cabinet Committee on Economic Affairs (CCEA) allowed coal block allottees the flexibility to sell 25 per cent of the output in the open market on the payment of a premium over the notified price. The methodology for the same is covered under the Coal Mines (Special Provisions) Act, 2015 and the Mines and Minerals (Development and Regulation) Act, 1957. In the case of auction/allotments, the successful bidder will be required to pay a premium of 15 per cent on its final bid price on a per tonne basis, for the actual quantity of coal sold in the open market. Earlier, the allottee was required to supply the excess production to CIL at a discount of 15 per cent on the CIL-notified price. The new methodology is aimed at addressing the issue of lack of response from bidders in the previous rounds of auction/ allotments by providing flexibility to the allottee in the use of coal in case of change in the economic situation and their requirements. The move is expected to make the ongoing and future rounds of auction/allotments attractive and commercially viable. It may increase competition in the auction process.

For adding more coal resources to the national inventory, the CCEA has approved the proposal for the continuation of the “Exploration of Coal and Lignite” scheme with an expected expenditure of Rs 18,750 million.

In March 2019, the ministry cancelled the sixth and seventh rounds of coal auction under which 19 blocks were planned to be put on sale. The tender for allocation was issued in November 2018, according to which 13 blocks were to be allocated under round six to the regulated sectors, including iron and steel, cement and aluminium, and six blocks under round seven to the iron and steel sector only.

In May 2018, the government finalised the methodology for the rationalisation of coal linkages for independent power producers (IPPs), allowing them to procure coal from a company other than the one with which it had signed the contract by transferring the existing coal linkages to their nearest mines. 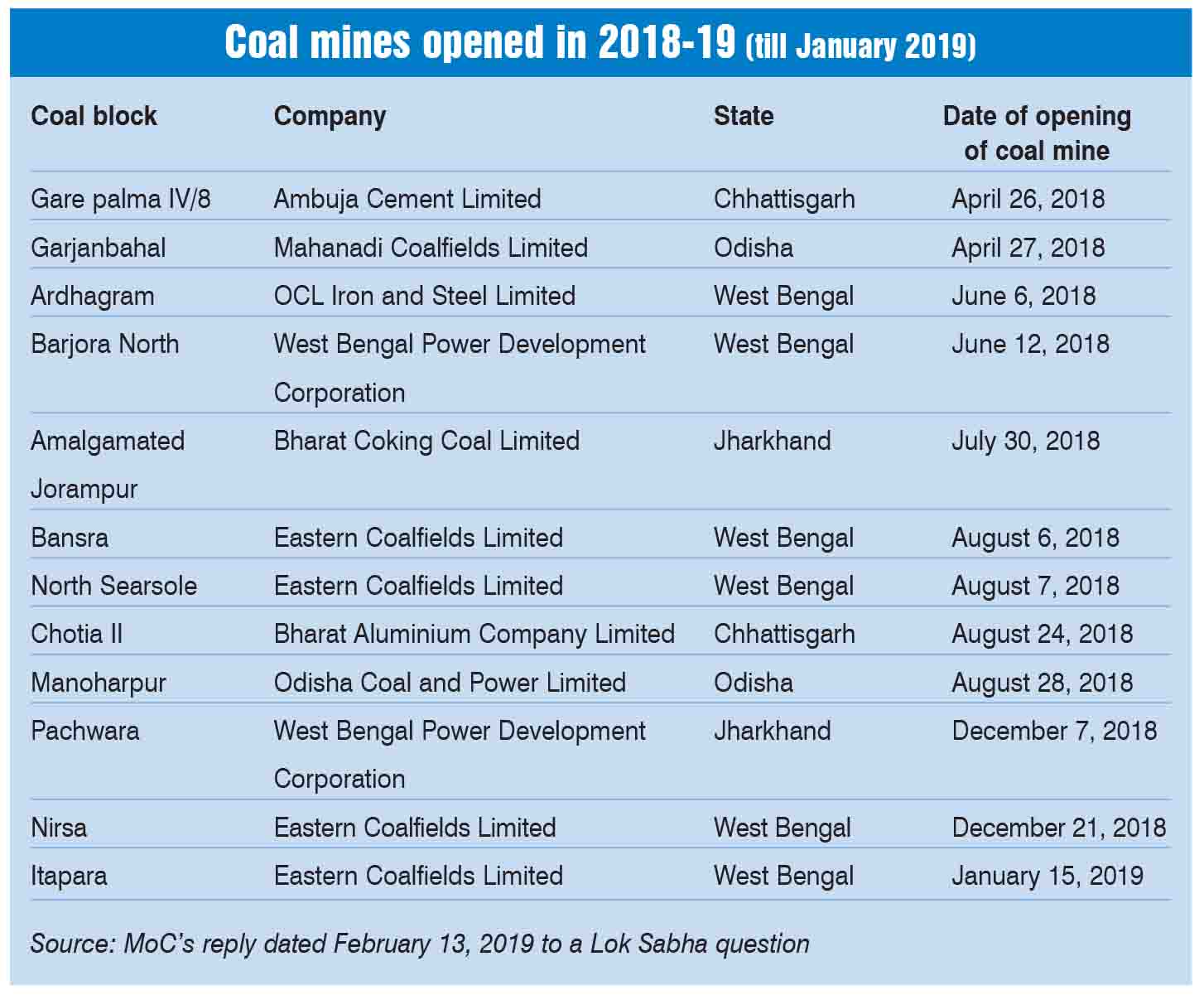 After facing several months of coal shortage in the past year, the coal stock position has posted some recovery on the back of government efforts. The sector has seen significant reforms, including the permission to sell coal in the open market at a premium and amendments to the SHAKTI scheme. However, the volatility in coal supply remains due to the ongoing delays in clearances and transportation bottlenecks. 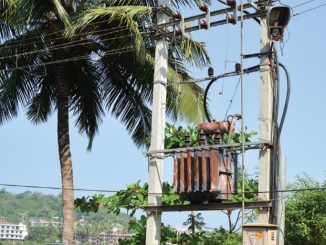 Distribution Hope
Signs of recovery in the segment

September 2017
The power distribution segment has shown considerable improvement over the past year. With the prime objective of [...]
More

July 2017
Fly ash management has been one of the key concerns of the power sector in India owing [...]
More

September 2017
The Ujwal Discom Assurance Yojana (UDAY) was launched as a panacea for the revival of the debt-stressed [...]
More