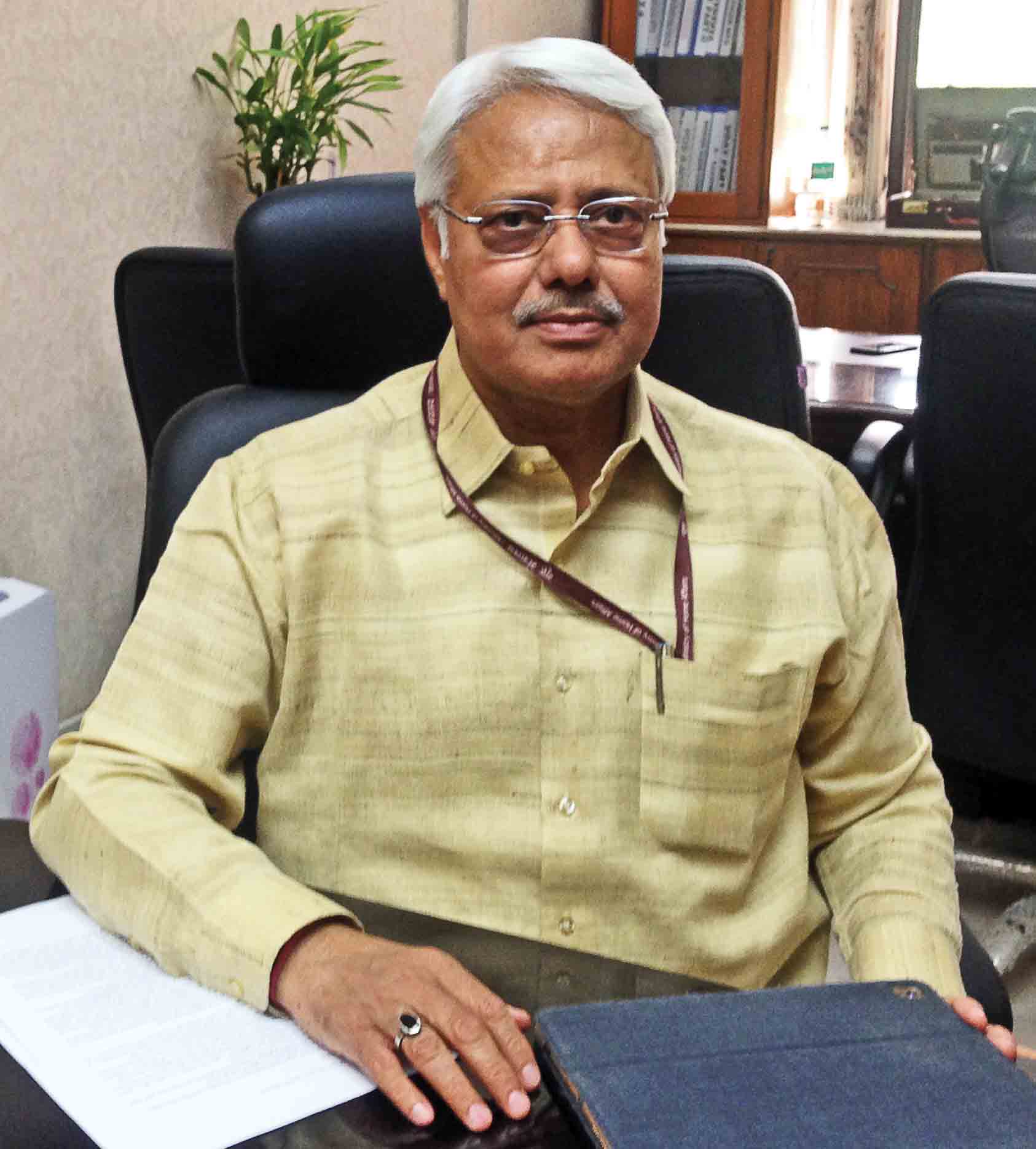 It’s been a gap of three years since Power Line last profiled Dr Arun Kumar Verma, joint secretary, Ministry of Power (MoP). Much water has since flowed under the power sector bridge. A lot has changed, and some has not. To get a sense of where the sector is at and what went into the making of some of the defining policies in recent years, we decided to speak to the man behind some of these and who has steered the sector for the past nine years…

It is easy to like Verma on sight. His affable, unflappable demeanour and unhurried manner are clear winners. Sitting behind his expansive desk, his back to a large window overhung by a red-and-white awning in his Shram Shakti Bha-wan office, Verma comes across as a  pleasantly unassuming person. But you soon realise his manner is a foil for the steely professional beneath. The joint secretary, power, has a tight grip on the sector and strong views on how to take it forward. He also spoils for challenges.

A 1986 batch officer of the Indian Forest Service, Gujarat cadre, Verma has had a long and interesting professional journey, during which he has served as physics teacher, technocrat and bureaucrat. It’s a journey that began in Gujarat’s forest divisions of Vyara, Kutch, Bariya and Rajpipla; then took him to Ahmedabad; and finally brought him to New Delhi. Everywhere, he left his imprint.

His initial postings – at Vyara, Kutch and Bariya – were particularly challenging. These troubled forest divisions were beset with problems of large-scale tree cutting, people conflict, smuggling, etc. “We faced a lot of challenges, but it was an interesting place to work in,” says Verma. He developed a strong empathy for the people living in the area and defined a fine balance between forest protection and sustainable development. “This was a laboratory for participatory forest management, where you worked with the people for the protection of the forest, and you shared the benefit with society also,” he says. In 2002, Verma was promoted as conservator of forests, Ahmedabad, and later was made commissioner of tribal development. It was an important posting, given that 15 per cent of the state’s population is tribal and much work needed to be done. He managed developmental works for around 7.5 million scheduled tribes of Gujarat.

Verma’s power sector innings began in 2008, when he took over as managing director of state discom Uttar Gujarat Vij Company Limited (UGVCL). During his tenure, the utility’s performance improved substantially and AT&C losses came down to 6.63 per cent. “That was very, very satisfying,” says Verma. UGVCL received the Gold Shield for its performance in 2010-11, among other commendations. In 2011, Verma was appointed member secretary of the Gujarat Ecology Commission and project director of the World Bank-aided Integrated Coastal Zone Management Project in Gujarat.

He took over as joint secretary, MoP, in 2014. It was then a very different power sector. He identifies the five big changes that have taken place since. “In order of priority, I would say the biggest differences are that all villages have been electrified and all households have been connected. The third difference is that we have become power surplus from a position of power scarcity earlier. The fourth is there is seamless transfer of power. And fifth, there is a lot of conservation and efficiency-driven activity going on.”

Verma has been closely involved in the formulation and implementation of key government schemes: DDUGJY, Saubhagya, IPDS, Power for All, and UDAY. Both the IPDS and DDUGJY have progressed well, he notes, and 60 per cent work has been done. But Saubhagya remains his most satisfying assignment to date. “I am glad I got this opportunity. It was very exciting work because those fellow countrymen who had not seen electricity now have access to it. It creates happiness and helps develop economically,” says Verma. He was the key person to drive the idea of going to household electrification straight from village electrification, instead of going to the hamlet. “People were wary of the numbers. But we got the states on board. Eventually, it’s all about collective working,” he says.

Verma dwells at some length on the distribution segment. To begin with, he does not see it as a weak link in the sector; rather, it is a critical and complex link. He believes that the risks are not evenly distributed along the value chain. “The upstream stakeholders, be it fuel producers, generating stations, transmission companies, are all B2B businesses. Distribution is a B2C business, so it is an altogether different experience. For upstream players, the consumer is the discom and they have many ways of passing through their costs. But in distribution, it is directly consumer related. You have to bear in mind what the consumer demands, that is, 24×7 affordable and quality power. It is a distorted market, wherein the costs are passed by the upstream player to the discoms, which cannot sustain them alone. The risks of the discoms must be shared,” he says.

Verma is upbeat on UDAY. “It is the most comprehensive power sector reform implemented till date, and one of the most successful. It is no doubt a complex solution to a complex problem. In terms of AT&C loss reduction, as on March 31, 2018, these losses stood at 18.7 per cent. This is the first time since 1963 that we have achieved below 20 per cent levels. Billing efficiency is now about 85 per cent, which means that T&D losses are at 15 per cent only. We started with financial losses of Rs 570 billion per annum and we reached Rs 150 billion in 2017-18. So these indicators robustly convey the success of the programme. Of course, all the states may not be at the same level, but all the states don’t consume the same amount of energy nor do they start from the same baseline. Moreover, the consumer mix is also very different.”

All in all, Verma believes that good improvements have been made. “There is on-boarding of all stakeholders: the Government of India, the state governments, discom managers, consumers. This in itself is a big thing. Losses are reducing, tariff orders are coming in. On the macro level, we are close to targets though on a micro level, it is not evenly distributed because every discom has a different background.”

So, what remains to be done? “I would like to see 24×7 power for all; quality power, affordable power. The cost of power is very important and purchasing power parity needs to be maintained. I also expect technology-driven changes, trends such as electric vehicles, charging infrastructure, smart meters and large-scale renewable energy integration.”

Verma has written over two dozen papers, drawing on his expertise in forest management and tribal welfare. He has also been the architect of several government schemes. He redesigned the JBIC-funded Integrated Forestry Development Project of Gujarat and contributed to the formulation of Gujarat’s Forest Development Project. He also prepared the Forest Protection Plan of Rajpipla (East) Forest Division and the Management Plan of Vyara Forests, and guided the preparation of the Urban Ecosystem and Forestry Development Project of Ahmedabad. He is particularly proud of the Vanbandhu Yojana, which he was instrumental in conceptualising, designing and implementing. This Rs 150 billion programme is the largest ever development initiative for scheduled tribes in the country.

Public service remains close to Verma’s heart. His advice to a young person joining public service today is simple – keep people in focus. “Public service is not a single-person job,” he says. “You have to take the team along. On-boarding of people, stakeholder inclusion are very important.” The second piece of advice is to not be fazed by challenges. “If there is a problem, a solution will also come. Diagnosis is more difficult than prognosis. Simplify the problem, understand it, and the solution will come.”

Verma has an M.Sc. in physics and in forestry. He has also done a postgraduate programme in public policy and management from IIM Bangalore, and has a Ph.D. in Tribal Development Policy.

Verma was born and raised in Sitamarhi district, Bihar. It was a simple growing up, with a large focus on education and values-based living. His teacher, late R.K. Pandey, at Guru Saran High School in Belsand, Sitamarhi, left a big impression on him, as did Dr K.D.P. Sinha, his principal during graduation. He was memorable not just for his unique approach to teaching algebra, but also for his simple lifestyle. At home, it was clearly Verma’s mother who was the main influencer. His father, also in government service, would be busy most of the time. But his mother was aspirational and ambitious for her children, and very generous. Qualities that Verma has imbibed in his own life.

Verma met his wife Snigdhaa in college. They were classmates and the friendship grew into marriage. It is a friendship that abides today too. They enjoy a morning walk together, doing holidays and meeting friends (a lot of them old ones from their Gujarat days). Their son, an IIMA graduate, has long flown the coop and is now married, also to a classmate, and lives in London.

Verma is a 24×7 professional and rarely powers off. And so, it is not surprising that when he retires later this year, he plans to work some more. He’s not quite decided on what yet, but people will definitely be at the centre of it. Already, he has been supporting welfare development work in his village Bhandari in Sitamarhi, helping connect people with government programmes. And yes, he also plans to write prolifically, something that he has long been wanting to pursue but not had the time for. Not fiction, he clarifies (“that’s for young people”), but power industry prose.