Switchgear is a combination of devices that are used to monitor, regulate, control, protect and isolate electrical equipment throughout the grid. These devices include switches, fuses, circuit breakers and relays. Switchgear (including control panels) form a significant part of the power transmission and distribution equipment market. According to the Indian Electrical and Electronics Manufacturers’ Association (IEEMA), switchgear accounted for the second largest share (around 18 per cent) in the Indian electrical equipment market in 2018-19, next only to cables (42 per cent).

In recent years, there has been a positive growth in switchgear demand on the back of government programmes such as the Integrated Power Development Scheme (IPDS), Deendayal Upadhyaya Gram Jyoti Yojana and Smart Cities Mission. Going forward, the development of new infrastructure and the modernisation of the existing one will go a long way in establishing a secure and reliable power transmission and distribution network, and driving the growth in the switchgear market.

Of the overall domestic market in 2018-19, LV switchgear accounted for nearly 79 per cent share while the rest was accounted for by MV and HV switchgear. With respect to year-on-year growth, the LV and MV switchgear market recorded a growth of 8.9 per cent and 2.9 per cent, respectively, in 2018-19, while the market for HV switchgear witnessed a decline of 1.9 per cent. The growth in the market for LV switchgear has been mainly due to increasing demand from the commercial and residential sectors. However, in the second half of 2018-19, there was a slowdown in the uptake of LV switchgear primarily because of a decline in the production of contactors and ACBs. Further, there has been a decline in the market for MCCBs of rating up to 100 Amp and MCBs as consumers are opting for other protective devices and a slow offtake by the realty and infrastructure sectors. For higher voltages, the demand has been lower than expected due to the slow pace of generation capacity addition in the conventional power space. However, the increase in renewable energy-based capacity continued to provide some support to the market for HV switchgear.

Both imports and exports form a significant part of the switchgear industry in India. The major sources of switchgear imports for India are China and Korea, while the major importers of Indian switchgear products are the US, the Middle East and South Asian countries. As per the IEEMA, exports of LV switchgear products increased at a CAGR of about 20.5 per cent between 2014-15 and 2018-19, and imports increased at a CAGR of 14 per cent. During 2018-19, imports and exports of LV switchgear were recorded at Rs 87 billion and Rs 73 billion respectively.

Conventionally, utilities installed air-insulated substations (AIS), which use air for insulation between various live parts. However, in view of the increasing space constraints and higher cost of land in big cities, utilities are now focusing on substation and switchgear technologies that require less space and have a reduced outage. These include gas insulated substations (GIS) and hybrid switchgear. GIS are indoor-type substations in which equipment is placed inside the modules filled with SF6 gas (the insulating medium). They require substantially less space (around 35 per cent lesser vis-à-vis AIS), entail lower maintenance costs and also have a lower outage rate as compared to AIS. The failure rate of a circuit breaker and a disconnecting switch in a GIS is one-fourth of that of AIS. Further, since the switchgear of a GIS is contained in a metal enclosure, it produces lesser noise and is safer to operate. Meanwhile, the initial cost of a GIS is around 50 per cent more than that of AIS. However, when the cost of land is considered in the capital cost, the overall capital cost is comparable. GIS technology is also being promoted through the IPDS under which 150 such substations are planned to be set up.

Hybrid switchgear is a mix of AIS and GIS technologies. It combines the benefits of both and can be installed indoors as well as outdoors. Its initial capital cost is about 20 per cent higher than AIS and requires moderate land size (50 per cent of AIS and 50 per cent higher than GIS). Hybrid technology is good for optimising space and cost, and future extensions of existing substations.

Smart and automated switchgear has become the need of the hour with huge volumes of renewable energy expected to be integrated into the grid and the need for better power reliability. To this end, digital substations, which are more compact, reliable and safe than conventional substations, can serve as one of the core elements of a flexible power grid. Such substations enable the collection of real-time data on primary equipment and the conversion of this data into actionable intelligence in order to help utilities monitor, control and maintain assets, as well as achieve cost efficiencies. 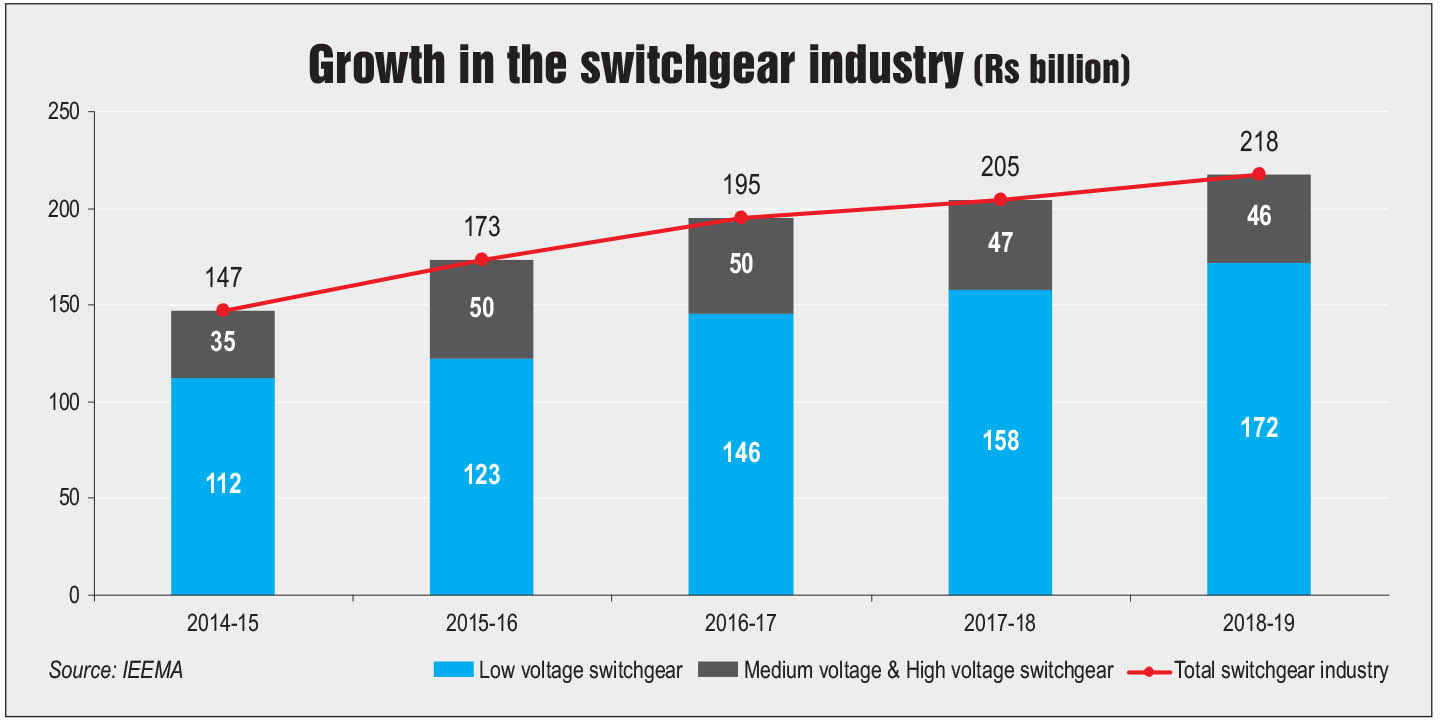 The switchgear industry has seen considerable growth in the past few years and the trend is expected to continue, given the significant investments being made by the central government to ensure 24×7 supply of quality power. Schemes such as the DDUGJY and the IPDS along with the planned capacity additions (especially renewable energy-based capacity addition) will continue to drive the demand for switchgear products. In addition, growth in the real-estate sector is expected to be a key driver for the switchgear market, particularly the LV switchgear segment. Meanwhile, there will be  greater focus on the development as well as deployment of advanced digital switchgear. n