Cables and conductors are among the most important components of a power transmission network. In the current scenario of increasing power demand, it is imperative not only to develop new networks but also to strengthen the existing grid, especially in congested areas. Growing urbanisation has led to space constraints in most parts of the country, necessitating the installation of more compact transmission lines.

In order to address this need, various advancements are being made on the technological side in the transmission conductor industry. These advancements are providing for an increase in the quantum of power that can be transmitted through conductors, thereby minimising the right-of-way (RoW) requirements.

Some of the major problems in setting up transmission infrastructure are centred on RoW, land acquisition and forest clearance issues. Longer project duration, which leads to slower asset capitalisation, is another bottleneck. One of the modern-day solutions to these problems is the usage of high temperature low sag (HTLS) conductors for reconductoring for higher ampacity and low sag.

Since the construction of new transmission lines is very expensive, it is necessary to choose the most efficient expansion plan – one that ensures system security with a minimal number of new lines. To this end, reconductoring of existing transmission lines with high performance conductors (HPC)/HTLS can increase power transfer by almost two times. Similarly, voltage upgradation in existing corridors can increase power transfer by 10 times. Before planning any new line, capacity enhancement of the existing system must be explored through uprating or upgradation options. Further, the usage of new-age conductors might be explored, as these provide high current capacity, and are low in weight as compared to traditional conductors. This helps in reducing the overall project cost.

The market for cables and conductors in India has grown significantly in the past few years on the back of investments in the power and infrastructure sectors. As per the Indian Electrical and Electronics Manufacturers’ Association (IEEMA), cables constitute the largest share of 42 per cent of the total equipment market, while conductors account for about 8 per cent. The growth index for cables during 2018-19 was 23.2 per cent, while that for conductors was -12.9 per cent. Within cables, low voltage (LV) power cables registered a 26.2 per cent growth, while high voltage (HV) ones recorded a 20.9 per cent rise. Meanwhile, control cables grew at the rate of 18.3 per cent. The overall size of the cable industry in India was estimated to be around Rs 490 billion during 2017-18. During 2018-19, the import of HV and LV cables stood at Rs 11.73 billion, while their exports stood at Rs 27.11 billion. During 2017-18, the conductor market was estimated to be at Rs 9.8 billion and registered a negative growth of -12.9 per cent. Meanwhile, during 2018-19, conductor imports stood at Rs 4.83 billion, much lower than the exports, which were at Rs 24.23 billion during the same period. 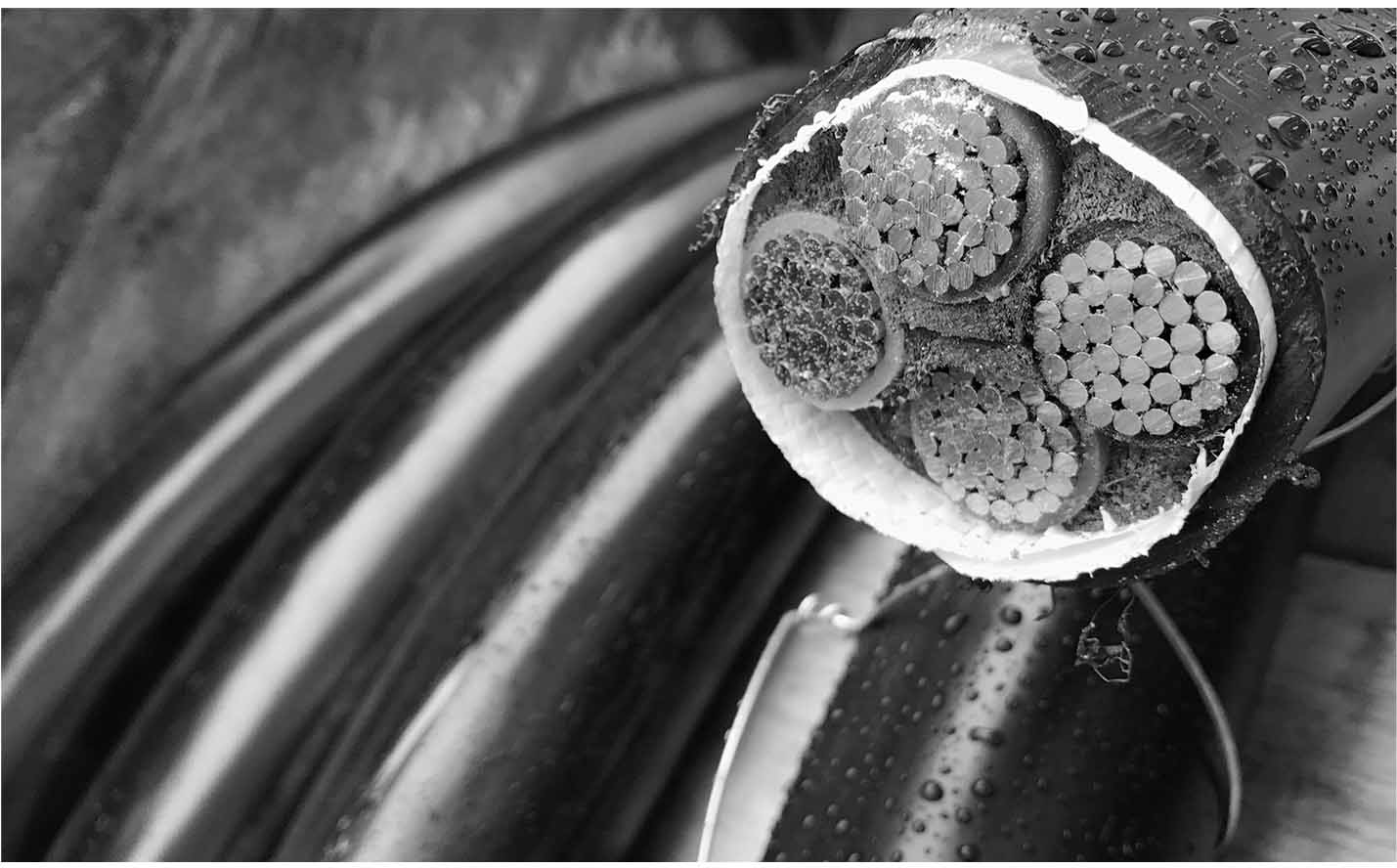 Further, a more advanced version of HPCs is HTLS conductor that can operate at a much higher temperature range than the conventional ACSR conductor, and has low thermal expansion and sag. HTLS conductors typically consist of aluminium wires helically stranded over a reinforcing core. They can be invar type, gap type, or the synthetic core-based type. Invar type conductors are made up of super thermal alloy conductors with aluminium clad invar (an alloy of iron and nickel) core. Gap-type conductors comprise high strength stranded steel core surrounded by grease. Trapezoidal strands of super aluminium alloys are wound around the gap created by the grease to form the conductor. The core can move freely within the conductor in the space created by the grease. Synthetic core conductors, as the name suggests, have a synthetic, primarily carbon, core surrounded by trapezoidal-sectioned cross-annealed super aluminium alloy strands. The stability of the aluminium strands and the physical properties of the core at higher temperatures are the key factors that determine the comparative performance of HTLS conductors. Two of the most commonly used HTLS conductors are super thermal alloy conductor invar reinforced (STACIR) and aluminium conductor composite core (ACCC). Utilities choose HTLS conductors based on their specific requirements. A major application of HTLS conductors has been in reconductoring the existing lines to increase power transfer capacity. This has been done by a number of utilities, including those in Kerala and West Bengal, thus enabling them to meet a higher load demand without laying new lines and achieve higher reliability. 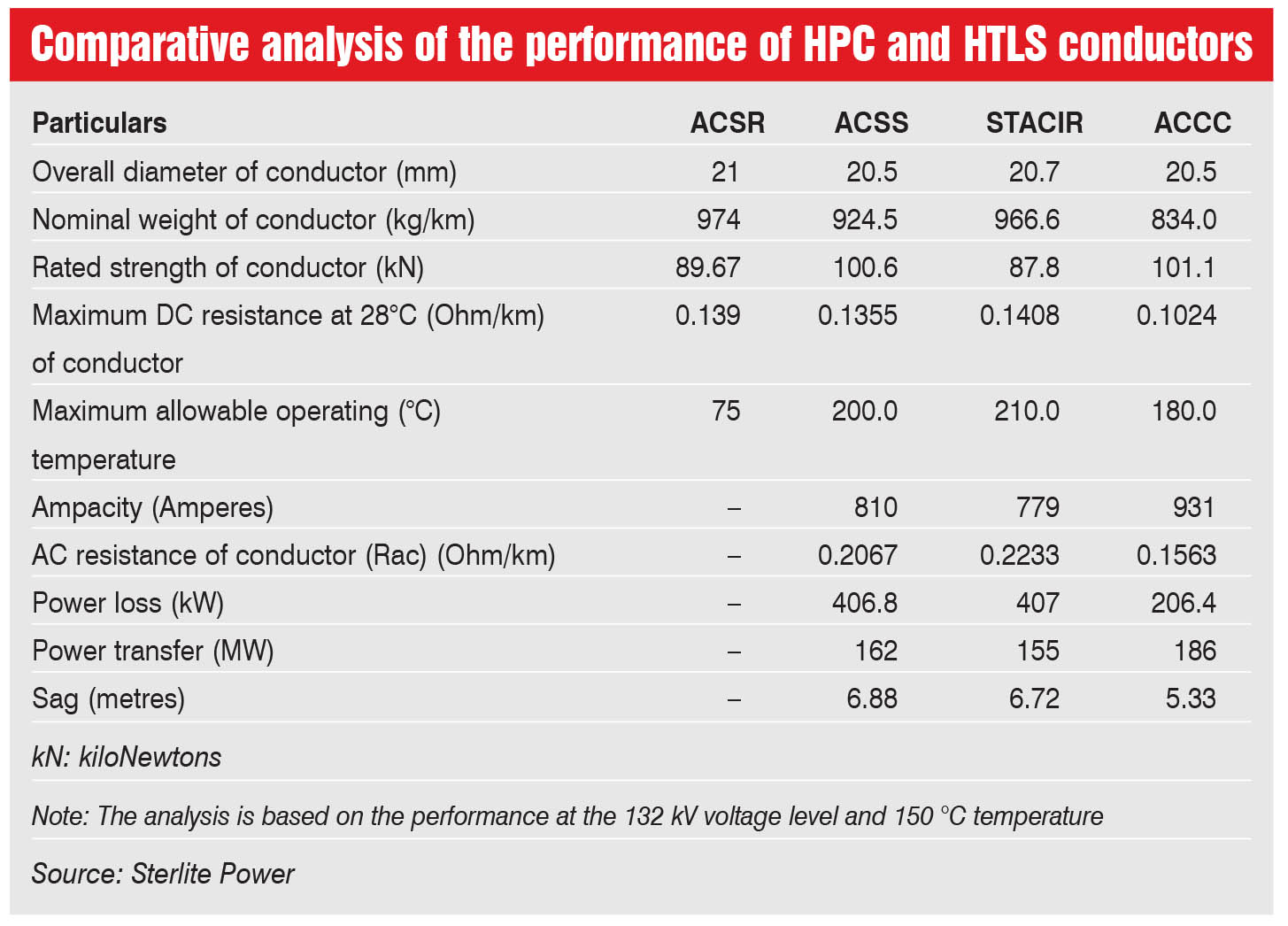