The transmission segment is evolving in line with the increasing power demand and the changing energy mix. Going forward, an investment of Rs 2.6 trillion is required in the transmission segment to meet the future peak load, which is expected to reach 234 GW by 2021-22. Grid expansion is largely being driven by the government’s plan to scale up renewable energy to 175 GW by 2022.

Power Grid Corporation of India Limited (Powergrid) continues to dominate the country’s transmission sector with 158,297 ckt. km of lines, 371,912 MVA of substation capacity and 245 substations (as of March 2019). In recent years, however, private participation in the transmission segment has increased significantly. The share of private players in terms of total line length has increased from 3.3 per cent in 2011-12 to 7.4 per cent in 2018-19. Meanwhile, their share in terms of substation capacity has increased from 0.5 per cent to 3.7 per cent.

Another key trend is the increasing use of technology in transmission project construction and operations owing to time and space constraints. Project developers are deploying LiDAR technology, drones and air cranes for the construction of transmission lines, and thermovision cameras and Android-based applications for operations and maintenance. Many utilities are adopting gas-insulated switchgear (GIS) and hybrid substations owing to right-of-way (RoW) issues.

The remote monitoring of substations is also being carried out by Powergrid. As of March 2019, Powergrid’s 210 substations were connected with the National Transmission Asset Monitoring Centre, Manesar, for remote operations. In July 2018, Powergrid, in collaboration with GE T&D India Limited, commissioned the wide area monitoring system (WAMS) for the northern region grid. This marked the first phase of the unified real-time dynamic state measurement project. The WAMS solution will enable Powergrid to monitor power flow across 110 substations in the northern region grid and respond to fluctuations within a fraction of a second. Once fully commissioned in all five regional grids, it will be the world’s largest WAMS solution, comprising 1,184 phasor measurement units and 34 control centres, and 350 substations in the national grid.

HVDC transmission is also growing in a big way. Powergrid has already commissioned the 6,000 MW ±800 kV Biswanath Chariali-Agra HVDC link and the 3,000 MW ±800 kV Champa-Kurukshetra HVDC link Phase I, which are enabling a huge quantum of power flow across the regions. The company is currently executing the ±800 kV Raigarh-Pugalur HVDC bipole link, the ±320 kV Pugalur-North Trichur (Kerala) HVDC bipole link, and the 3,000 MW ±800kV Champa-Kurukshetra HVDC station (Poles 3 and 4). It has also recently awarded a contract to Siemens for refurbishing the ±500 kV back-to-back Vindhyachal HVDC link in Madhya Pradesh. Further, project developers have started exploring other emerging markets for diversifying their business. A case in point Sterlite Power, which has secured 10 projects in Brazil entailing a total capital investment of over Rs 122 billion. The company recently commissioned the Arcoverde project in record time. 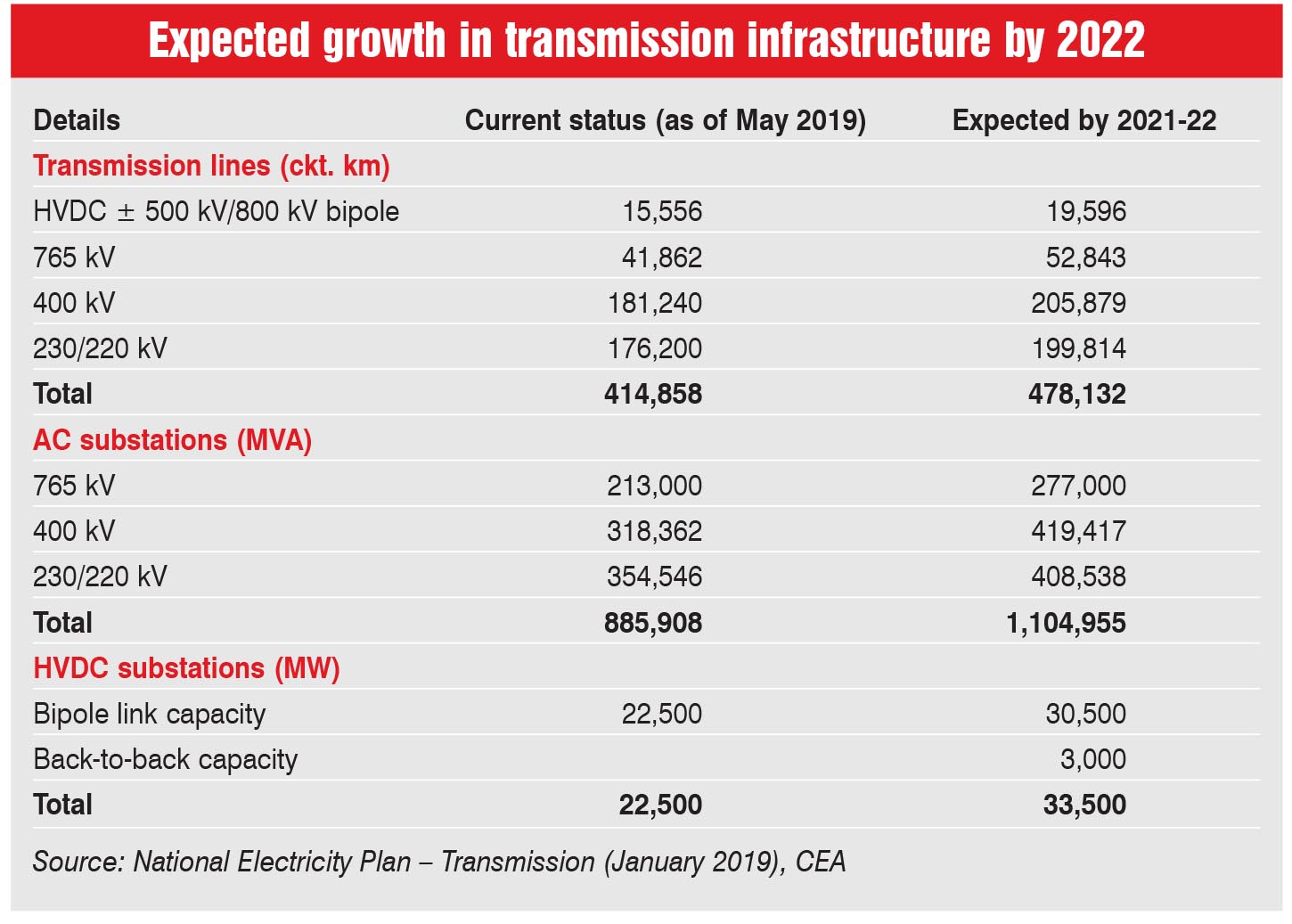 Phase II of the GEC primarily involves the development of the transmission system that caters to ultra mega solar power parks (UMSPPs). Across 21 states, 34 UMSPPs have been planned. To evacuate power from these parks, about 22 GW of intra-state transmission system capacity is envisaged under GEC II. This will be partially funded by KfW. The implementation of the ISTS by Powergrid for seven UMSPPs with a cumulative capacity of 6,450 MW in five states is currently in progress. The ISTS has been completed for three solar parks – NP Kunta (Andhra Pradesh), the Pavagada Solar Park (Karnataka) and the Rewa Solar Par (Madhya Pradesh).

In addition, the government has plans to set up 11 renewable energy management centres between April 2019 and March 2020 at an estimated cost of about Rs 4.09 billion. These centres will enable collection and monitoring of real-time renewable energy data for forecasting and scheduling of renewable energy projects. They will coordinate with the grid operation team at the load despatch centres for safe, secure and optimal grid operations.

Another key growth area for the transmission segment is railway electrification. Indian Railways (IR) plans to electrify about 30,000 route km during 2018-19 to 2021-22 for achieving its 100 per cent electrification target for broad gauge rail routes. To achieve the stated target, it plans to collaborate with the Central Organisation for Railway Electrification, Powergrid, RITES Limited and IRCON International Limited. With a long-term vision to improve power reliability, IR plans to have a dedicated transmission line network that will provide reliable power at a reasonable cost. It aims to achieve a cumulative transmission network of 20,000 km. This will include 8,850 km along the Golden Quadrilateral route and a 300 km dedicated freight corridor. The transmission lines along the Golden Quadrilateral route are expected be taken up on a public-private partnership basis. Further, an additional network of 500 km each is proposed to be set up by South Eastern Railway and South East Central Railway. IR currently has its own transmission network of 600 km – Dadri-Kanpur (400 km) and Kanpur-Allahabad (200 km). In addition, around 2,000 km is under construction, along the Allahabad-Mughalsarai, Mughalsarai-Howrah, Mughalsarai-Sonnagar and Delhi-Bharuch routes.

The setting up of charging infrastructure for electric vehicles (EVs) is another emerging area for transmission service providers. In 2018-19, Powergrid set up its first public EV fast charging station at the Miyapur metro station in Hyderabad on a pilot basis. The company is now exploring other locations/cities. Powergrid has also implemented a pilot project with battery storage in Puducherry.

Several challenges need to be resolved to ensure that the grid expansion plans remain on track. From a grid planning point of view, these challenges pertain to the short gestation period of renewable energy plants, reactive power management, fault level at the point of interconnection, the diversity of resources, and the quantum of renewable energy generation. Moreover, there are operational issues that arise due to the variability and intermittency of renewable energy sources. This leads to challenges in maintaining the load generation balance, and reducing system inertia, among other things.

Further, due to the lack of harmonisation of policies and regulations across states, securing right of way remains a pressing concern for all project developers. Another issue is that the projects are sporadically awarded under TBCB, and there is no long-term pipeline of projects. Also, ensuring a level playing field between private and public players in TBCB projects is critical for increasing competition in the segment.

Regarding the project pipeline, a total of 10 interstate projects estimated at Rs 93.28 billion were up for bidding as of end May 2019. In the intra-state segment, eight projects totalling Rs 97.3 billion are at different stages of bidding in the states of Jharkhand, Madhya Pradesh, Uttar Pradesh and Maharashtra. Overall, 18 projects totalling Rs 190 billion are expected to be finalised in the near future.