With rapid integration of intermittent renewable energy into the grid and variable demand patterns, maintaining grid security and reliability has gained significance. As thermal power generation continues to contribute to the majority of the country’s electricity consumption, making it flexible (to the extent technically and economically feasible) to accommodate increasing amounts of renewable energy has become a priority. The flexibility metrics for thermal stations must ideally cover the technical minimum, ramp rates and the number of start/stop operations. The  Central Electricity Regulatory Commission, has taken relevant steps in this direction by defining 55 per cent technical minimum for thermal power generation as well as incentivising flexible operation of such generators. Further, the Central Electricity Authority (CEA) standards recommend specific levels of ramp rate for thermal generators, which are currently higher than those mandated in the Indian Electricity Grid Code (IEGC) (Table 1).

While the regulations are in place, whether thermal generators are really capable of delivering the required flexibility has been analysed in the report “Analysis of Ramping Capability of Coal-fired Generation in India”, published by the Power System Operation Corporation (POSOCO). Released in April 2019, the 559-page voluminous report attempts to quantify the ramp rates provided by the country’s thermal units based on historical data. It analyses the records of 436 generating units of 200 MW and above size with an aggregate capacity of 165 GW. This data-intensive exercise concludes that only over one-third of the thermal units were able to deliver the mandated ramp rate of at least 1 per cent per minute (as per the IEGC).

“Hitherto, not much attention was given to flexibility, as plants were required to operate at full load to meet the demand. Now, with the required adequacy in the system and increasing renewable energy integration, it is important to recognise and value flexibility, develop metrics to measure it, device mechanisms for payment and incentivise plants to deliver it when required,” says a senior system operator.

Eventually, when large-scale grid integration of renewables takes place, it is expected that the net load  would be characterised by steeper ramps and lower minimum generation levels. The net load is the difference between the actual connected load and the generation from variable sources such as wind and solar or conventional generation that will need to be flexed to achieve load generation balance in real time. According to the report “Greening the Grid: Pathways to Integrate 175 GW of Renewable Energy into India’s Electric Grid by 2022”, the net load ramp will peak at 32 GW per hour. Consequently, the generation that serves the net load must be more flexible. Although ramping capability is a technical aspect, it has a significant impact on reserves deployment and economic despatch. Hence, fast ramping resources will play a critical role in ancillary services.

Power Line presents the key highlights of the POSOCO report…

Methodology: The report analysis is based on the 15-minute average supervisory control and data acquisition (SCADA) data for all coal-fired units for seven years from 2011-12 to 2017-18. Data for 2017-18 has been used to ascertain the ramping capability for each generator. Both ramp-up and ramp-down of each generator have been determined separately and converted to percentage per minute. The report notes that the estimated figures are conservative. This is mainly owing to faster ramping units (which would have delivered fast ramping for the first few minutes in a block) that may have been averaged by the steady generation in the rest of the block.

Results: The key observations of the study are:

RRAS thermal units’ ramp rates: The report presents the ramp-up and ramp-down rates furnished by reserve regulation ancillary services (RRAS) providers. The ramp-up rate for all 51 stations except one is less than 1 per cent per minute, which is quite less than the CEA recommendation.

Differentiating start-up/shutdown ramp rates: Based on international literature and experience, the report observes that the start-up and shutdown ramp rates are different from the normal operation ramp rate (that is, ramping of a machine when it is operating at partial load). This is important during despatch of machines (thermal units) after they are committed to a schedule. Each non-peaking unit is synchronised at zero MWs in the first few minutes of the hour in which it is committed and ramps at the start-up ramp rate for the unit. When the unit is ramping, power generation is calculated as integrated MWhs and the unit is not allowed to contribute to the spinning reserve. Similarly, whenever a unit is decommitted, a shutdown ramp rate is used. 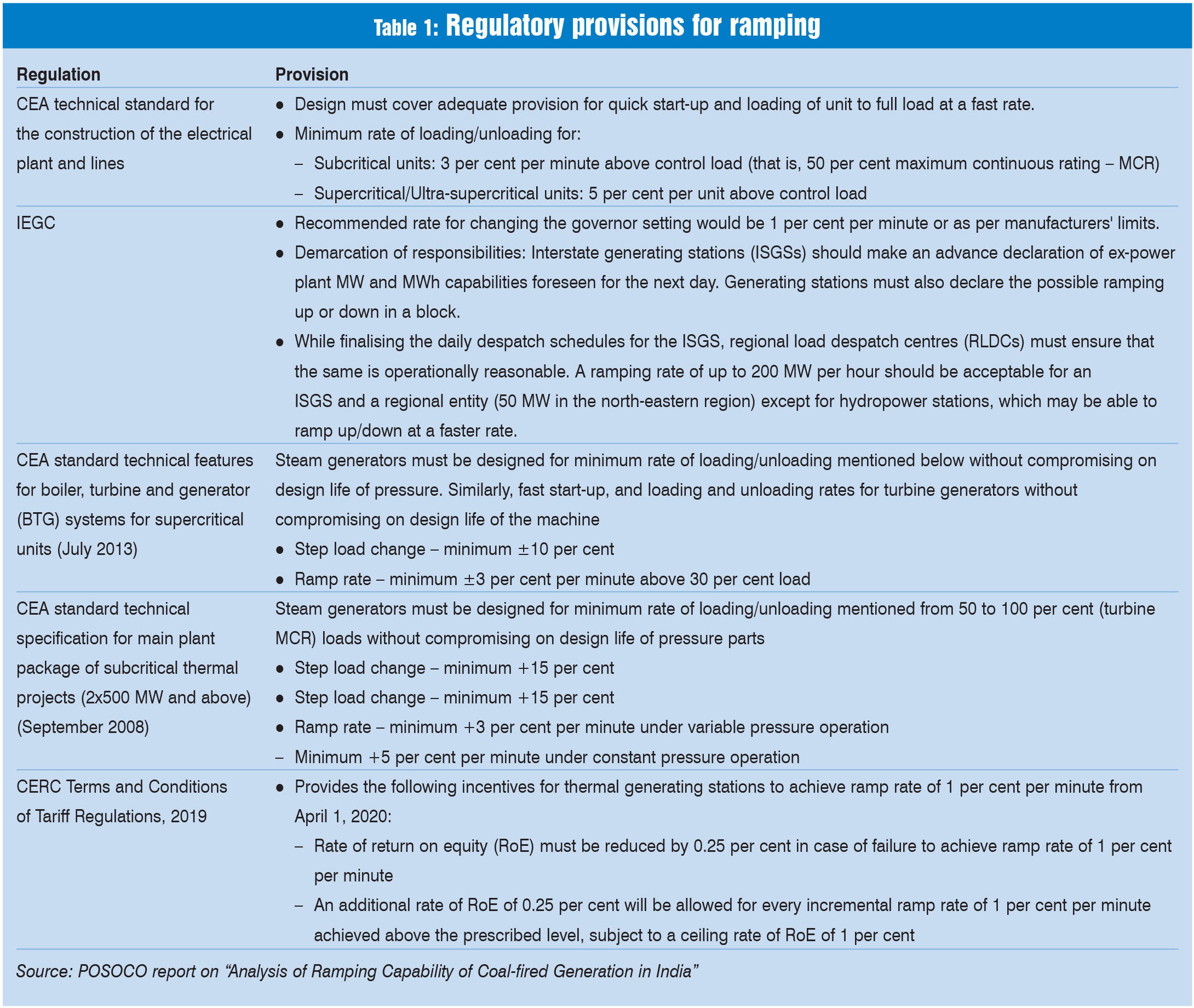 Load ramp and projected thermal ramping capability: An analysis of the load ramp helps identify periods that may be operationally challenging and in need of generation ramping to serve the load. During 2017-18, the maximum all-India demand ramp-up per block was 3,750 MW and the ramp-down rate was 2,500 MW. With further increase in demand and renewable energy penetration, the ramping requirement is going to increase in the future. A large part of this ramping requirement will need to be met by the existing thermal base, while the remaining requirement can be covered by hydropower (particularly, pumped storage capacity) and gas capacities which inherently have better ramping capabilities.

The CEA report on “Flexible Operation of Thermal Power Plant for Integration of Renewable Generation” has projected the thermal ramping capacity in 2021-22 (Table 2). The POSOCO report observes that the actual ramping capability would be way below the CEA estimated 1,841 MW per minute given that many cheaper units (already operating at full capacity) would hardly have any up margin reserves. Likewise, many of the thermal units already operating at 55 per cent technical minimum would hardly have any down margin reserves. (This aspect of reserves and ramping capability was duly incorporated in the optimisation process by POSOCO while preparing to implement Security Constrained Economic Dispatch from April 1, 2019).

Position in merit order matters: The report includes a note of caution while interpreting an individual station’s ramping capability. Generally, pithead coal plants are fully scheduled since thermal units follow the merit order despatch. These plants are, therefore, rarely called upon to use their ramp rate. However, middle or higher merit order plants are required to follow load on a daily basis. Thus, ramp rates become important for these units. The analysis of the report is based on the ramp rates observed in real time hence it does not suggest the actual ramp capability.

As seen above, ramping support from thermal generation will be critical in the context of large-scale grid integration of renewables and the changing load structure. Higher ramping will be required only for short durations. Therefore, other aspects need to be considered for ensuring overall economic despatch. The POSOCO report has come at an appropriate time, as it will help regulators and thermal plant developers to pay attention to methods for improving ramping capability. It will bring the focus on adequate fuel availability and overall maintenance of thermal power machines. It will also offer developers an opportunity to enhance their earnings with the proposed incentives for better flexibility. Net, net, the power system is moving in the right direction to better handle the huge influx of intermittent renewable energy generation and variable demand patterns in the future.