Gujarat State Electricity Corporation Limited (GSECL) was incorporated in August 1993 to augment Gujarat’s generation capacity. Following the unbundling of the Gujarat Electricity Board in 2005, GSECL became a 100 per cent owned subsidiary of Gujarat Urja Vikas Nigam Limited (GUVNL). Since then, the company has built a diverse power generation portfolio. At present, the company’s total power generation capacity is around 5.9 GW comprising a mix of coal, lignite, gas, hydro and renewable energy projects. In a recent key development, the company commissioned an 800 MW project in March 2019. It is the first supercritical technology-based project commissioned by the state genco.

The company has also consistently strived to improve its operational performance through a number of measures, including renovation and modernisation (R&M) of several of its units. It is now gearing up to meet the revised emission norms for its coal-based fleet, besides developing renewable energy projects.

GSECL owns a total installed capacity of 5.9 GW, most of which comes from seven thermal power plants aggregating over 4,968 MW (four coal-, one lignite- and two gas-based power stations) and two hydropower plants aggregating 540 MW. Apart from these, the company has set up 24 MW of renewable generation projects – 10 MW of wind and 14 MW of solar power projects.

The newly commissioned 800 MW unit at the Wanakbori power station based on supercritical technology is located in Kheda district. The main order for the project was awarded to Bharat Heavy Electricals Limited in December 2014 at an estimated cost of Rs 353,651 million. Significantly, this was the first-ever 800 MW unit in the country to be developed on an engineering, procurement, construction basis. The boiler was supplied by Alstom and the turbine generator by Siemens. GSECL has signed a power purchase agreement with GUVNL for the project.

During 2018-19, the Dhuvaran and Utran gas-based power plants cumulatively generated 1,118 MUs as compared to 853 MUs in the previous year. The PLF of the two gas-based power stations, however, remained low at around 13.44 per cent and 12.77 per cent, respectively, on account of shortage of domestic gas supply. 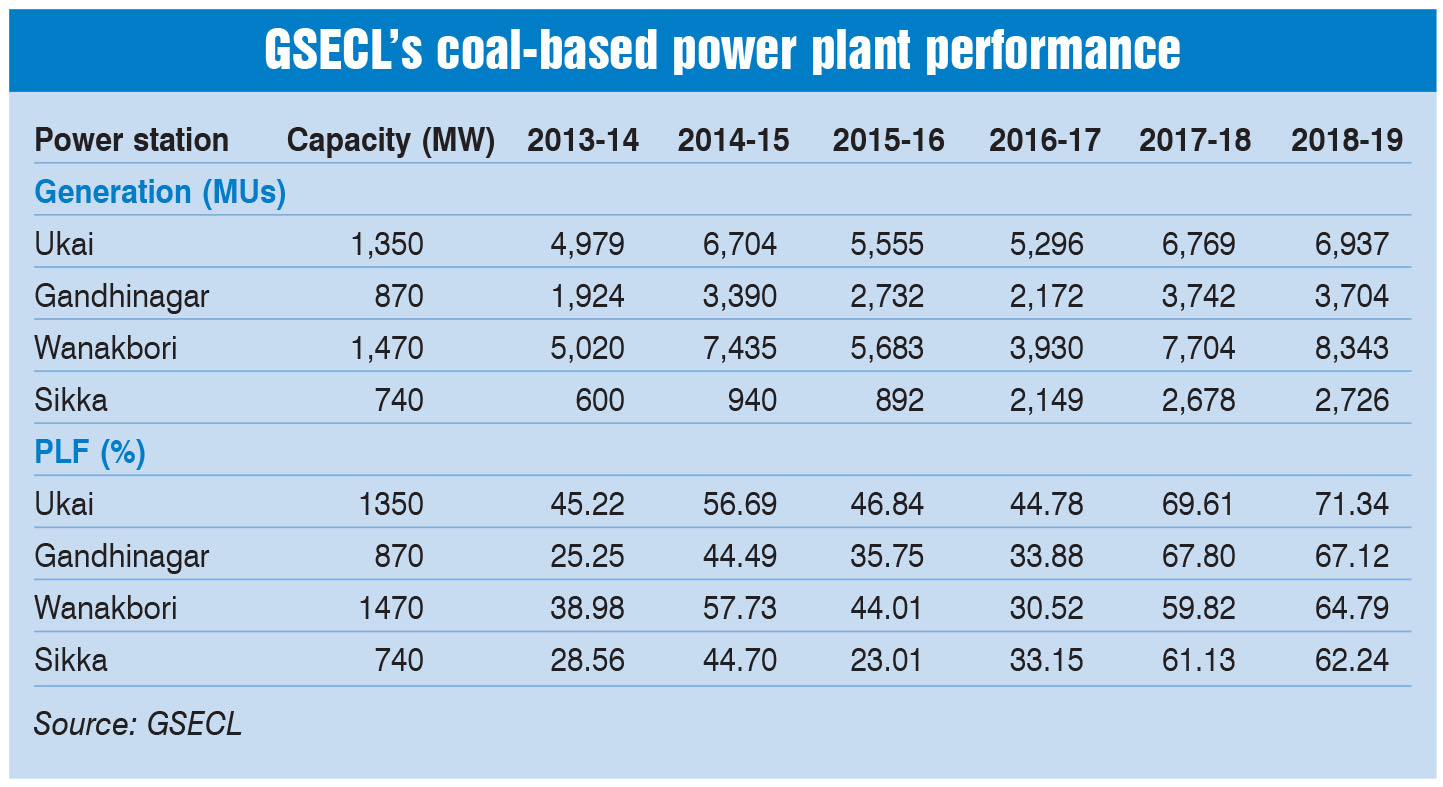 On the renewables front, the company’s  10 MW Kutch wind project located in Bayath comprises eight windmills of 1.25 MW each. It has also set up a 1 MW canal- top solar photovoltaic (PV) project on the Narmada branch canal near Chandrasan, Mehsana. In addition, there is a 1 MW ash dyke solar PV project in Gandhinagar and a 10 MW PV project in Charankaare, which have been operational since 2012 and 2015 respectively. At the Sikka and Kutch lignite TPSs, the company has installed 2 MW pilot agri-solar PV power projects.

The R&M of old units has been a key focus area for the genco. As part of the Energy Efficiency R&M programme, GSECL completed the retrofitting of LMZ turbines and boiler back pass modification at its Ukai TPS Unit 4 (200 MW) and Wanakbori TPS Unit 3 (210 MW) in 2017. Post its completion, the efficiency of these units has improved substantially. A similar R&M programme for the Ukai TPS Unit 5 (210 MW) is currently in the proposal phase. Meanwhile, to meet the emission control norms, GSECL has upgraded the electrostatic precipitators at Units 3, 4 and 5 of the Ukai TPS and Units 1, 2 and 3 of the Wanakbori TPS. The tender for the installation of flue gas desulphurisation (FGD) systems in the remaining coal-based units is currently under preparation. For Unit 8 of the Wanakbori TPS, work for FGD installation has been awarded. Further, the tenders for FGD implementation in Unit 6 of the Ukai TPS and Units 3 and 4 of the Sikka TPS are currently under finalisation.

On the renewables front, projects of about 175 MW are currently under planning and implementation. 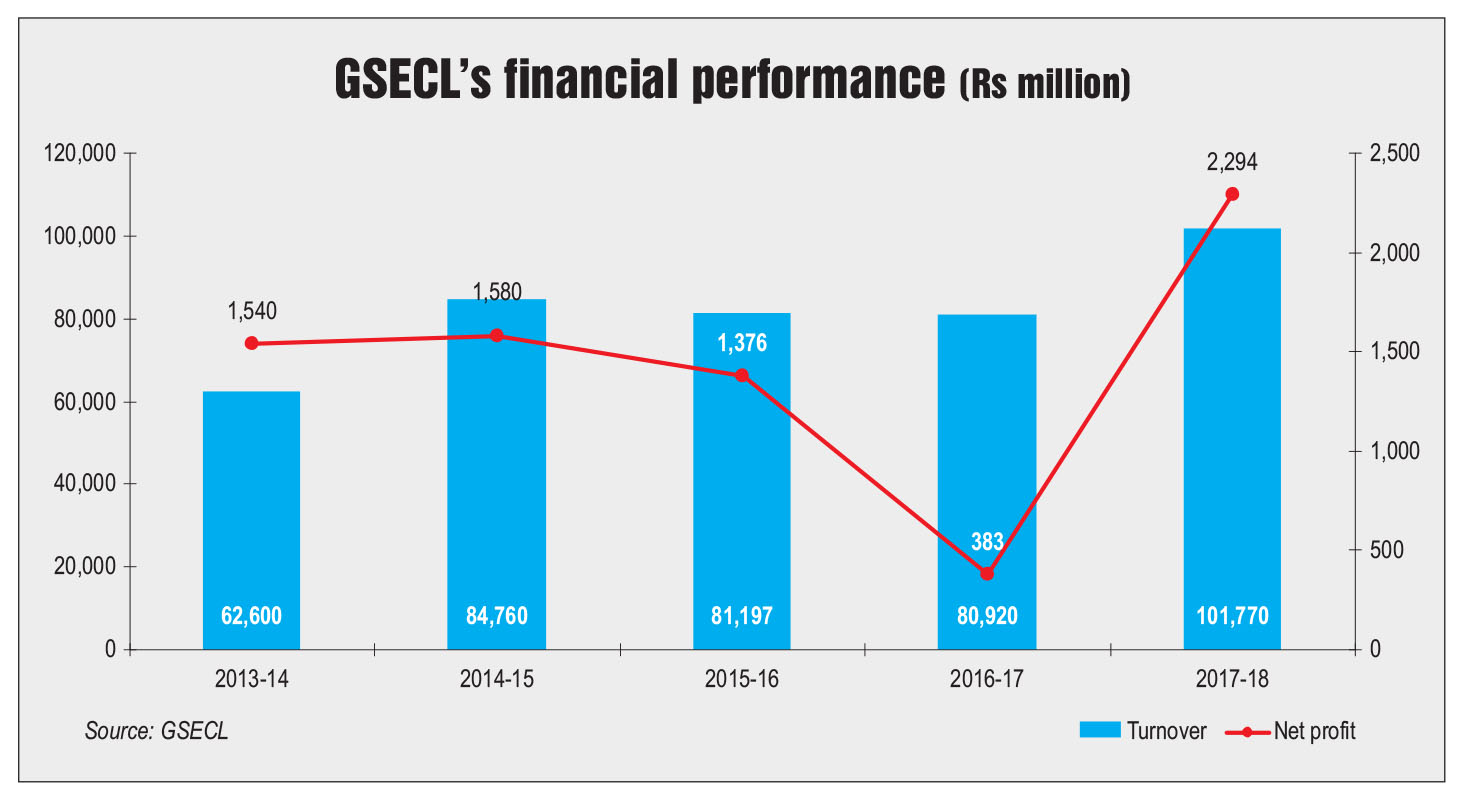 A major challenge faced by the company’s coal-based power plants is that the increasing penetration of renewables has resulted in frequent cyclic operation and start/stop of coal-based units, which leads to a deterioration in operating efficiency of units and increased thermal stresses resulting in fast consumption of the main plant equipment and auxiliaries. For gas-based power plants, a major challenge has been the availability of cheap domestic gas for running its plants. The gas required for full load by both its gas plants is around 4.12  million standard cubic meters per day (mscmd). Currently, only 0.33 mscmd is being received at the Dhuvaran plant, which is sufficient for running only one of its units at a technical minimum load of 16 hours. Spot gas is costly as it is based on the international crude index. Further, taxes like value-added tax, custom duty and goods and services tax make gas-based generation unviable.

In spite of an overall improvement in the efficiency levels of power gencos, the operational efficiency of GSECL’s power stations is still lower than the normative targets set by the regulator in terms of plant availability factor, PLF, auxiliary consumption and station heat rate. This is due to the vintage of the plants and high operating overheads, notes a recent ICRA Ratings report.

Another challenge for the company has been its recent merger with Bhavnagar Energy Company Limited (BECL), which has an operational lignite-based asset (two units of 250 MW each). In August 2018, GSECL received approval to merge with BECL. However, delays in the commencement of lignite supply and a lack of required water supply have affected BECL’s operations. Over the past six months, lignite supply has started, and water availability has improved. This will allow the plant to reach the normative plant availability in the medium term. However, the current operational risk at BECL is likely to impact the profitability of the merged entity to some extent notes ICRA in its report.

While there is sufficient power in Gujarat, an increase in power production will ensure that it remains attractive for industries and enterprises. To this end, GSECL is taking initiatives to augment its capacity, improve operational performance and grow its renewables base.