The country’s leading power exchange, the Indian Energy Exchange (IEX) has proposed to introduce “exotic bids” (new bid order types) in its day-ahead market (DAM). In an effort to bring in greater flexibility and variety for the participants on its platform, the IEX, in December 2018, filed its regulatory compliance application for the introduction of new products with the central regulator, the Central Electricity Regulatory Commission (CERC). Following the proceedings in this regard, in May 2019, the CERC invited comments from the Power System Operation Corporation of India (POSOCO), trading licensees and other stakeholders on the IEX’s application by June 10, 2019.

In its application, the IEX contends that the changing power market scenario in terms of the number and types of generators, load pattern, and increase in the renewable generation capacity, has led its participants to request for the introduction of services that cater to their changing needs. After conducting a detailed research on the subject, besides stakeholder discussions, the IEX has proposed to introduce seven new types of bids in the DAM. These are profile block, flexi block, minimum quantity bid, minimum income condition (MIC) bid, MIC with scheduled stops, load gradient, and enhancements in link bids. These new bid types will augment the already existing products in the DAM, which accounts for the bulk of trade on the IEX. During 2018-19, over 50 BUs of 52.15 BUs transacted through the IEX has been accounted for by DAM, out of an aggregate volume. Specifically, the new products are aimed at catering to the specific constraints of generators and demand pattern of buyers. This includes variable renewable generators and even thermal plants, which require significant time for ramp-up/ down operations, to allow them to enjoy the full benefit of spot markets.

However, this is not the first time that an exchange has proposed to introduce new flexible order types. Previously, in 2014, the country’s other power exchange, Power Exchange India Limited (PXIL), submitted a petition to introduce three types of flexible bids. In June 2015, the CERC rejected PXIL’s petition as it was unable to complete and submit test results for the proposed products then.

According to the IEX, it is technically prepared to immediately test and introduce at least two of the seven proposed products. It is awaiting regulatory approval to make any further required technical and system changes for the introduction of other products. After the CERC’s approval, the IEX will take about three months for testing and introducing the first couple of new order types. Power Line presents the key highlights of the IEX application…

Current offerings and their shortcomings

The IEX currently offers three products on the DAM – single bid, regular block and linked block. A single bid specifies multiple sequences of price and quantity pairs in a portfolio manner. The quantity is assumed to vary linearly between two price pairs.

A block bid specifies one price and one quantity for a combination of continuous 15-minute time blocks. The selection criterion for such bids is the average of the area clearing price for the quoted 15-minute time blocks of the clients’ bid area. It is an all-or-none type of bid, whereby it is either entirely selected or rejected completely. The maximum quantity per block bid is 100 MW. Another available variation is called the parent-child block bid or the linked bid, which provides conditional selection. Here the child bids will be considered only after the selection of the main or parent bid.

The issue with a single bid is that it does not cater to the complex constraints of  generators and the demand pattern of buyers. For instance, a generator is obliged to deliver even if the selected bid quantum is less than the technical minimum of the generator. Likewise, partial selection of single bids in a few time blocks makes it difficult for the buyer to make arrangements from different sources. Unreliability of the contracted quantum is a major flaw of this order type.

Similarly, the rigid nature of the existing block bids does not allow changes in the quantum of power across time blocks. This becomes a major disadvantage for renewable generators and thermal generators with partial long-term agreements. Another issue is that of paradoxical rejection of block bids. Here, the system rejects a block bid even though it will appear to be a valid bid for selection, in case inclusion of such a bid results in a change in the market clearing price (MCP). 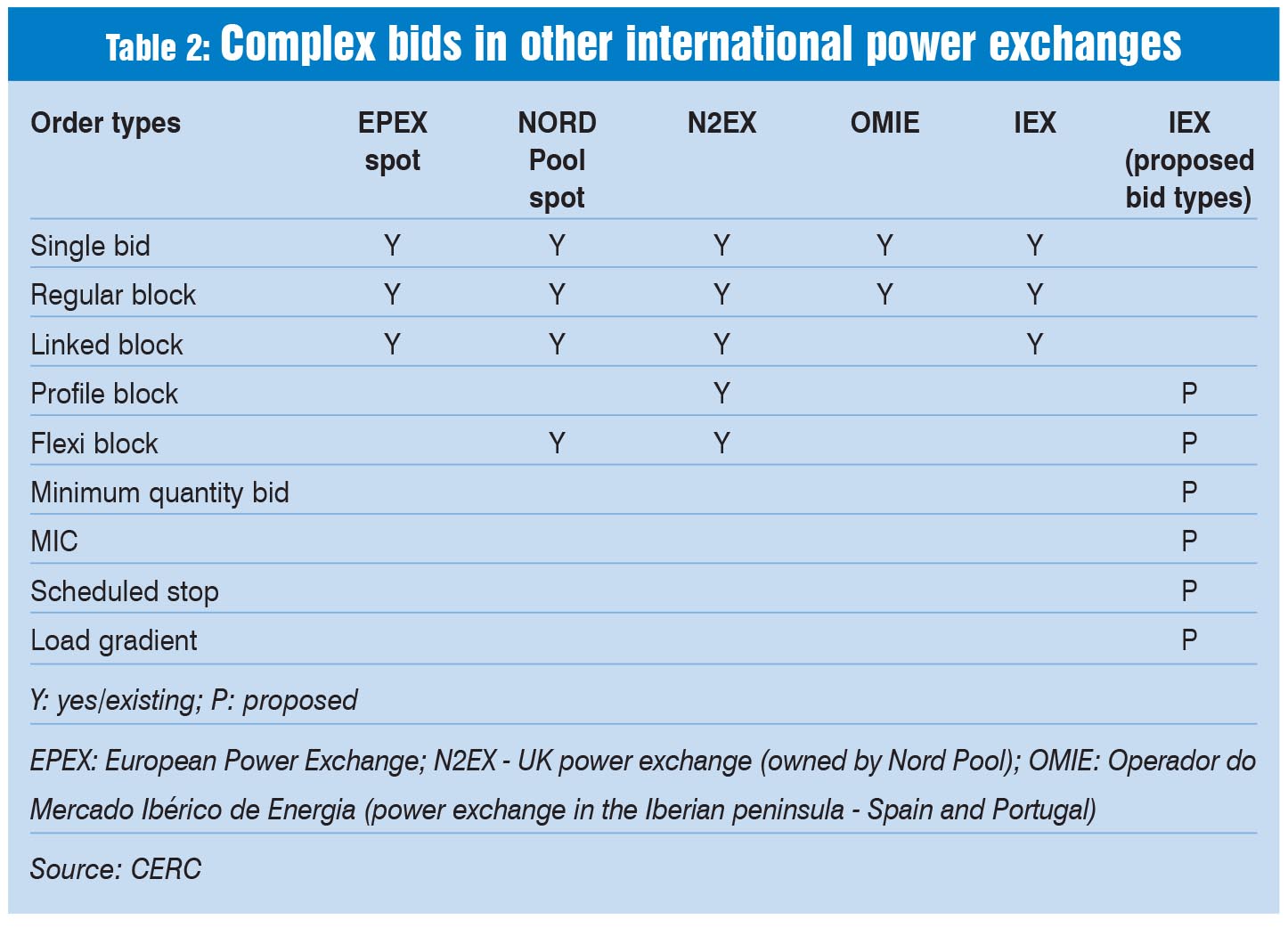 The IEX has proposed seven new order types – four single bids and three block bids. For the proposed block bids, the maximum bid quantity will be the same as a normal block bid (100 MW). Further, the parameters for the minimum tradable quantity will be defined by the IEX from time to time.

Profile block: Under this bid, there is a provision to enter the same or different quantity for each time block at the time of the block bid request. The price, however, will be the same across the entire block period. For selection purposes, the weighted average of the system price will be compared instead of the average price.

Minimum income condition (MIC) bid: It is a new type of single bid, which allows members to place a bid with a requirement of minimum revenue condition to be fulfilled. The bid will not be considered if the income obtained for the whole day is below a defined threshold, comprising two parts – fixed amount (in Rs) and variable amount (Rs per MWh). The minimum time period for the bid selection will be defined by the user at the time of bidding. The selection criterion is defined as follows:

MIC bid with SCC: MIC bids can be backed by scheduled stop condition (SSC) to avoid abrupt shutdown of the plant. Here, a few initial bids will be selected to ensure gradual plant shutdown. Basically, this condition will alter the deactivation of the MIC bids of unsuccessful bidders. Such bids will be accepted at the MCP (even if it is lower than the price quoted by the seller) along with the quoted volume for the first time block. The volume will be reduced subsequently over the next few time blocks to make the schedule of the generator zero.

Load gradient bid type: It will limit the variation between accepted volume of an order in one period and the volume of the same order in the adjacent periods. This is to accommodate generators, which cannot cope with sharp variations of delivered power. Such generators can specify the maximum variations of power in MW per minute or MW per 15-minute time block and also different types of ramp rates (start up, shutdown, ramp up or ramp down).

Flexi bid: This provides an option to users to place bids that include fixed volume and price but without defining the time period. Users have the option of contiguous hours or a single hour. Under the first option, bidders may quote the quantum and number of contiguous hours for which they will trade. For selection, the average price of the hour will be considered. The maximum number of contiguous hours will be parameterised by the IEX at a later stage. In the other case, bidders can place flexi bids for single-hour multiple times with a possibility of being selected as many times. However, these hours may or may not be contiguous. Such bids can be placed for the same portfolio with the same or different price and quantity combination for the same delivery date. A specific hour is assigned to the bid by algorithm during the matching process based on the principle of maximisation of the total welfare.

Enhancement in link bids: In this new bid type, the child or linked bids will be considered for allocation even if it is “out of the money” that is a negative difference between the average price and block bid price. This will occur in cases where the bid (parent) to which it is linked compensates for the negative difference making the total value of the linked blocks “in the money”.

Overall, this is a positive move, as the introduction of new products will allow participation by new and emerging players in the renewable energy and energy storage space in the market. At the same time, it is important for the regulator to ensure that new products are configured to achieve the fundamental objective of social welfare maximisation. Further, previous concerns regarding block bids with respect to eliminating smaller players must also be appropriately addressed by providing a level playing field to all participants.

As such, new and innovative products must be introduced as it is long overdue given that the power exchanges have been operating successfully for over 10 years since their launch in 2008. With only 4 per cent of India’s generated power transacted through the exchanges, there is enough headroom for the IEX to expand operations.

At the policy and regulatory level, a significant impact can be made to increase volumes traded on the exchange if state generators (which have been passive so far) are encouraged and enabled to participate in the market. Further, with the increase in liquidity in the power trading market, financial contracts (or derivatives) may be introduced after a due consultation process to make the market more vibrant. In fact, this has been referred to in the CERC’s discussion paper on MBED (market-based economic despatch), “Redesigning of DAM in India (December 2018)”, in the form of bilateral contract settlement (BCS). Under this proposed arrangement, power delivery under all contracts including long-term power purchase agreements will take place through the power exchanges at the MCP. The difference between the MCP and the bilateral contract price will be settled through the the BCS.

To conclude, the short-term power trading market is slated to witness the next milestone in its evolution with the introduction of these proposed exotic bids.