In August 2019, the Central Electricity Regulatory Commission (CERC) proposed several amendments to create the necessary framework for the implementation of the real-time market (RTM), for electricity. This is an important development in light of the large-scale integration of intermittent renewable energy into the grid and the changing demand patterns. The emerging scenario has necessitated market redesign to bring the demand and supply sides closer to real time. The idea of the RTM was first mooted by the CERC in July 2018 when it published a discussion paper titled “Re-designing Real Time Electricity Markets in India”. In the paper, it was pointed out that the deviation settlement mechanism (DSM), which was meant to handle last-mile system imbalances, was being used as an avenue for real-time energy procurement and sale. Also, ancillary services (AS) introduced for managing grid frequency were being used for meeting real-time energy needs. Therefore, in order to demarcate energy trade and system imbalance handling, the CERC proposed the introduction of an RTM in the window between the day-ahead market (DAM) in the power exchanges and the DSM/AS mechanisms.

The CERC has proposed the following framework for the RTM:

Introduction of gate closure and the RTM: The introduction of gate closure has been considered to ensure the firmness of day-ahead schedules. The CERC has opted for the half-hourly market which implies that the right to revision of schedule would be available up to seven or eight time blocks before actual delivery of power (currently, the right to revision option is available up to four time blocks in advance). The proposed RTM would provide discoms an alternative mechanism to access a larger market at competitive prices while allowing generators to participate in the RTM with their unrequisitioned capacity. The “right to recall” exercised by discoms to meet sudden changes in load is a product in the electricity market continuum. When the application window for one product expires, the window for another product opens. The proposed timeline would provide sufficient time to the system operator to carry out the entire process of scheduling and despatch. The right to revision of schedule is available to discoms and generators until the RTM for specified half-hour commences. Any electricity requirement after gate closure should be met through the RTM at the real-time price. Any revision in schedule made in odd and even time blocks would become effective from the seventh and eighth time blocks, respectively. The block in which the revision request has been made would be considered as the first block. This means that once the RTM commences for any half-hour period, the revision in schedule for those two time blocks would not be permitted. Revision may be made for the remaining time blocks of the day for which the RTM is yet to be commenced by the discom or generator. The RTM would provide discoms a revolving reserve to meet their real-time energy needs in the form of a half-hour trading opportunity. At the power exchanges, the existing intra-day market would continue to clear the continuous transactions except for the time blocks for which the RTM would operate. In case of forced outages, grid-connected generators can participate in the RTM and buy power for the beneficiary to honour its commitment. Some of the amendments have been proposed to avoid ambiguities in the interface between day-ahead schedules and gate closure, and to ensure financial commitments under the day-ahead schedules are adhered to while actualising gate closure operations. 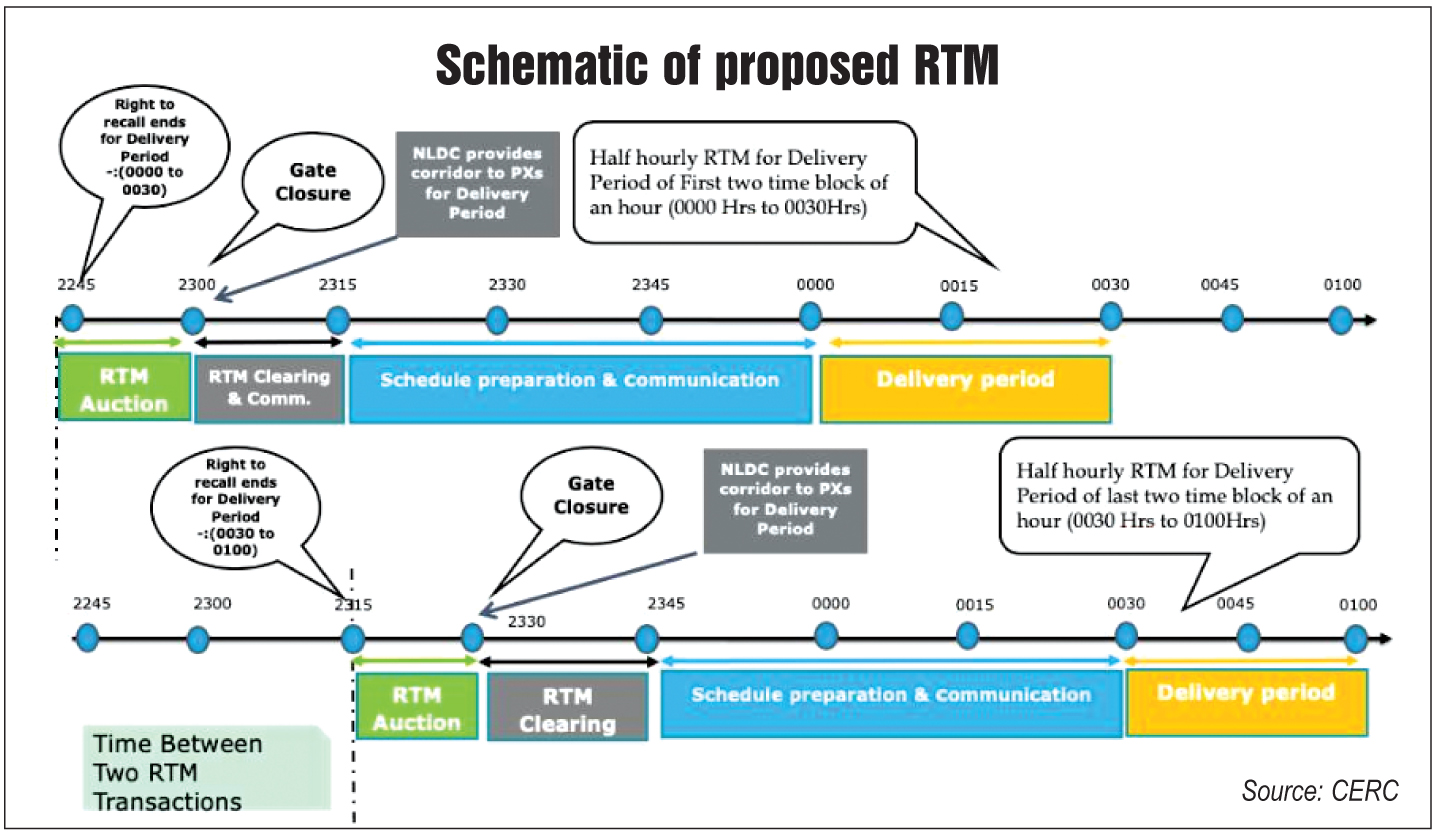 Timeline for the RTM: Given that the National Load Despatch Centre (NLDC) has demonstrated its capability to clear the scheduling and despatch within 30 minutes while implementing the pilot on security constrained economic despatch (SCED), the CERC has recommended conducting the RTM every half an hour. It is expected that the process would be further streamlined with the implementation of the impending National Open Access Registry, a technology solution to the short-term open access process.

For the implementation of this, the NLDC would prepare detailed procedures for collective transactions under the RTM, based on the outline given in the CERC Regulations. The charges for the participants would be specified in the rules of the power exchanges.

Sharing and settlement in the RTM: Given that the RTM is an energy-only market and participation is based on variable or marginal cost, the CERC has proposed the equal sharing of gains by generators having long-term PPAs with discoms. The CERC, in the fourth amendment to the DSM Regulations, in November 2018, had indicated the plan to link DSM prices with RTM prices. This would be done once the RTM market is activated. Further, the RTM would be open to all generators – merchant, renewable or thermal (with unrequisitioned capacity) – to ensure that real-time energy needs are met at the least cost. The treatment of conventional and non-conventional sources of power participating in the RTM would be as per the existing DSM Regulations.

The draft amendments are open to stakeholder feedback until September 5, 2019. A public hearing would be held on the subject by the CERC, the date of which would be notified subsequently. The recent initiatives in the power system such as the SCED and the RTM would help mop up the available cheap power in the system at the all-India level while meeting any sudden changes in demand. It would increase the competitiveness of the market. However, there is a need to bring in more generation capacity into the market. Otherwise, the same pool of power generation resources would be divided among different products such as the RTM, the SCED and the ancillary services. Renewable energy generators can take advantage of the RTM as they would be able to forecast generation closer to real time. That said, due to the “must-run” status of the contracted renewable energy capacity, only merchant renewable energy generators would be able to take advantage of the RTM. For now, the introduction of the RTM would facilitate better system operations and energy imbalance management.