The power sector is evolving rapidly with renewables replacing thermal power across the world. A sharp reduction in the capital cost of renewable energy technologies, especially solar, and the growing commercialisation of battery energy storage systems have helped countries look beyond conventional sources of power generation. Considering this, planning for an optimal generation mix that is cost-effective as well as environment-friendly is crucial. The Central Electricity Authority (CEA) has recently completed a study aimed at finding out the least cost optimal generation capacity mix required to meet the peak electricity demand and energy requirement for the year 2029-30 based on projections of the 19th Electric Power Survey (EPS). The CEA has published the findings of the study in the Draft Report on Optimal Generation Capacity Mix for 2029-30. Power Line presents the key findings of the draft report…

The government has set a target of 175 GW of installed renewable energy capacity by 2022 and has taken several policy initiatives to this end. Also, India, as per its Intended Nationally Determined Contribution (INDCs), has committed to achieve about 40 per cent of the total installed capacity from non-fossil fuel sources by 2030. Further, it is expected that battery energy storage technologies would become financially viable and complement renewable energy generation in the coming years. However, the country has a large fleet of existing pithead coal-based power plants which provide electricity at low rates vis-à-vis other sources. In view of the mismatch between peak demand and renewable energy peak generation, hydropower and flexible coal plants can provide grid stability. To address these issues and to optimally utilise the available resources, the least cost generation capacity expansion needs to be planned in an optimum manner to meet the forecasted peak electricity demand in the future. 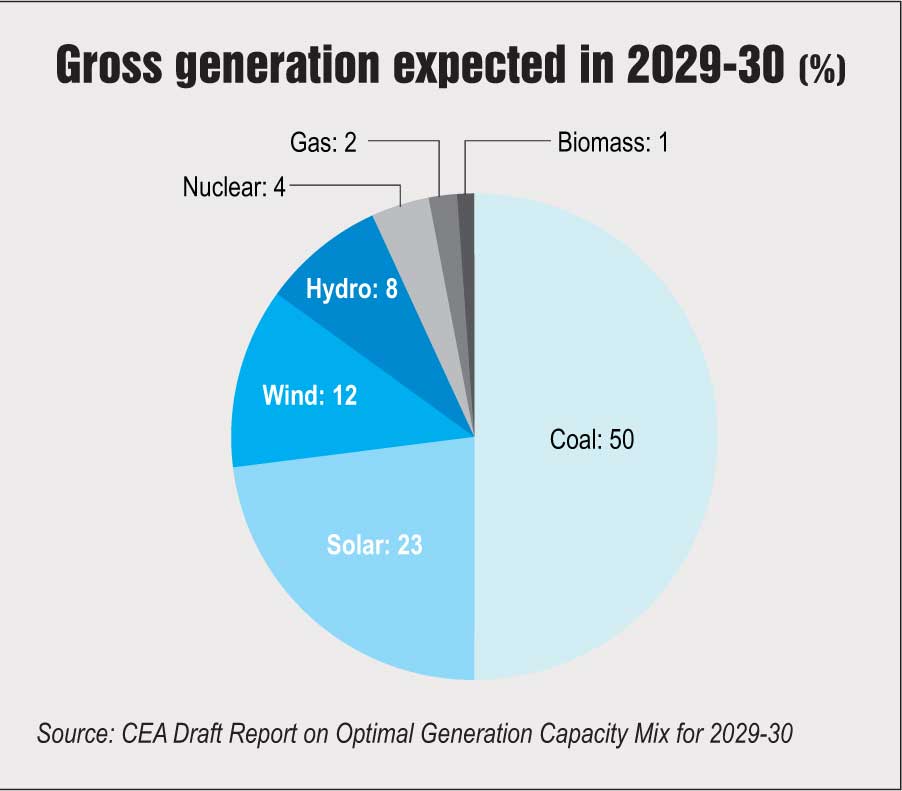 Inputs for the report

Further, the CEA has considered the projections of the 19th EPS for peak electricity demand and electrical energy requirement. However, to capture the hourly and seasonal variation in grid-connected rooftop solar along with grid-connected large solar photovoltaic plants, the energy contributed by rooftop solar has been added to the energy requirement projected in the 19th EPS. Accordingly, the energy requirement for 2029-30 has been taken as 2,400 BUs and peak load as 340 GW as there is no peak contribution from rooftop solar. A capacity addition of 13,762 MW of hydro, 6,800 MW of nuclear, and the retirement of coal-based units of 25,572 MW have been considered from 2022-23 onwards. No new gas-based capacity has been taken into account apart from the existing capacity of about 25,000 MW.

The cost of battery energy storage systems has been estimated in the study after consultation with various battery manufacturers/suppliers. The cost trajectory for battery energy storage systems is assumed to decline uniformly from Rs 70 million in 2021-22 to Rs 43 million in 2029-30 for a four-hour battery system, which includes an additional cost of 25 per cent due to the depth of discharge. 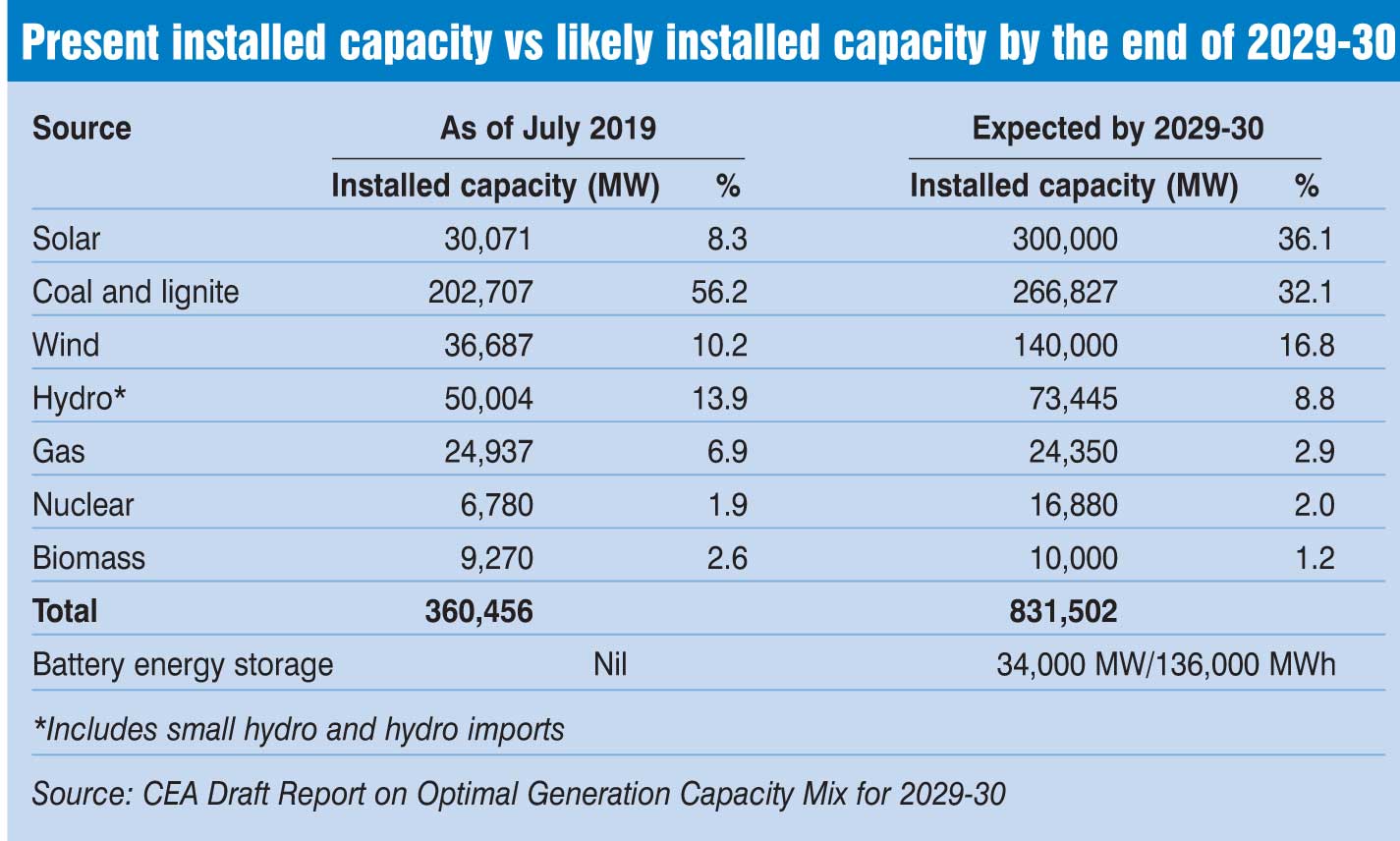 However, coal is expected to account for a majority share (50 per cent) in the gross energy generation, followed by solar at 23 per cent and wind at 12 per cent. Hydro, nuclear, gas and biomass are expected to account for shares of 8 per cent, 4 per cent, 2 per cent and 1 per cent, respectively. The projected gross electricity generation during 2029-30 is likely to be 2,508 BUs, comprising 1,297 BUs from thermal (coal, gas and lignite), 887 BUs from renewable energy, 197 BUs from hydro, 101 BUs from nuclear and 26 BUs from biomass.

In addition, carbon dioxide emissions from the power sector are likely to reach 1,154 mt by 2029-30. It was observed that emissions from coal-based power plants vary with the loading of the plant. The impact on efficiency due to part load operation is more in subcritical power plants than in supercritical power plants. It is observed that carbon dioxide emissions may increase to 1 per cent due to efficiency drop owing to part load operation of coal-based power plants on peak demand days and 1.2 per cent on maximum renewable energy generation days.

Sensitivity analysis for contingency scenarios has also been carried out by considering a reduction in generation from various sources during certain weeks of 2029-30. The results of the sensitivity studies show that with the base case installed capacity and a battery energy storage capacity of 34,000 MW/136,000 MWh, there may be unserved energy sometimes. However, if the availability of coal-based power plants is increased from 1 per cent to 1.5 per cent, the demand is likely to be fully met. 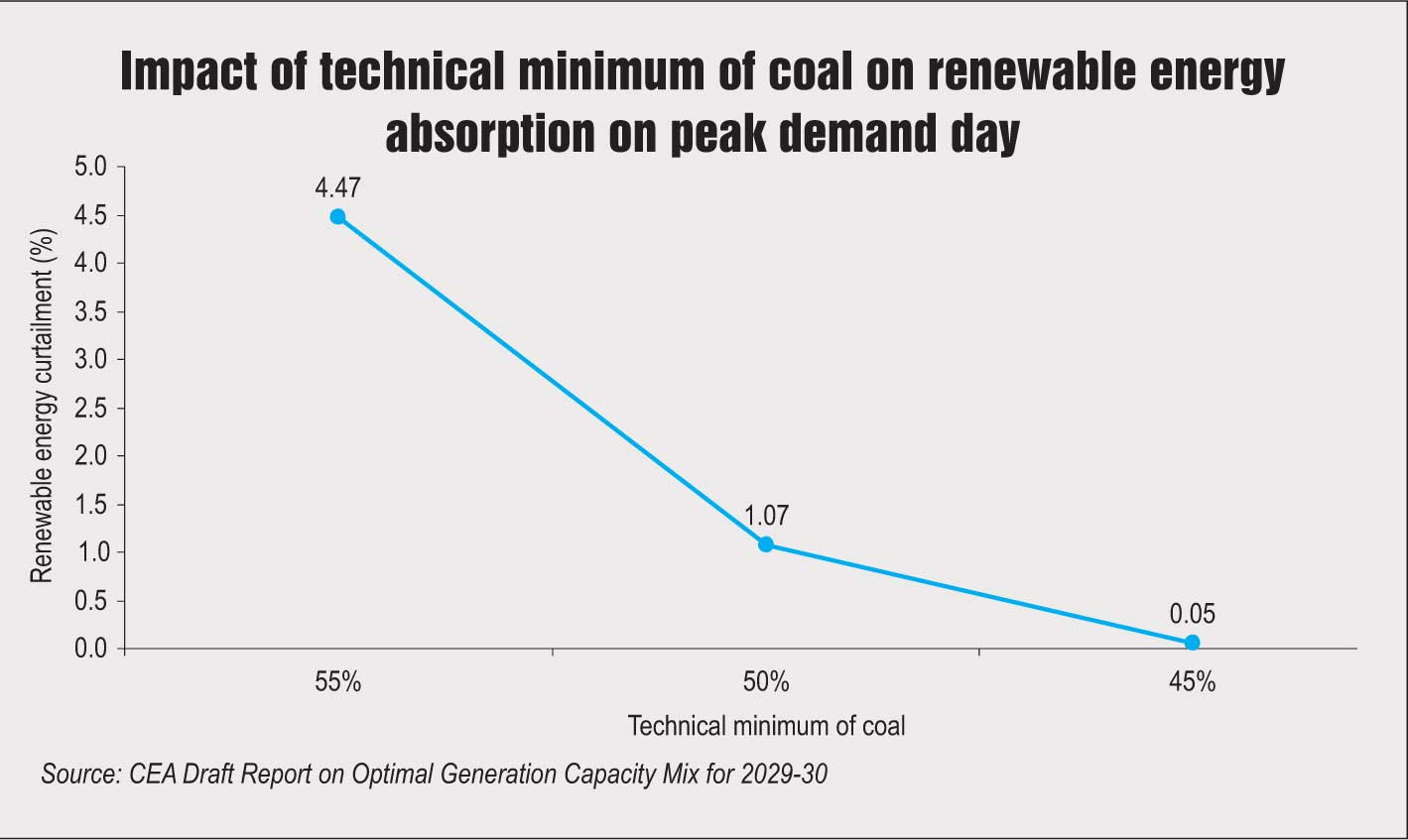 The CEA study on the least cost optimum generating mix further reinforces the trend of increasing replacement of thermal power by renewable power in the future. In this context, TPPs need to take flexibility initiatives in order to complement renewable generation in the coming years. The study throws light on energy storage systems becoming relevant 2026-27 onwards, due to the reduction in the cost of solar and battery systems. Net, net, the energy landscape of the country is expected to see a massive shift over the next decade or so.