The power sector is witnessing a paradigm shift with the expansion of the distributed generation segment, the increasing share of renewables in the energy mix, the growth of electric vehicles, and the declining costs of battery energy storage systems. The shift towards renewables is changing the pattern of electricity transmission in India. Earlier, power was transmitted from the east to the other parts of India. Now, power is being generated across the country and is flowing in all directions. So, there is a need for more transmission lines. The changing flow of electricity will require major investments in transmission in the coming years.

Meanwhile, energy storage is emerging as the next big thing globally as well as in India. At Power Line’s “Power Transmission in India” conference, Ved Mani Tiwari, CEO, global infrastructure, Sterlite Power, noted, “Grid in the electricity context has always been thought as a sort of a warehouse that provides a real-time demand-supply market for consumers because electricity could never be stored. Now with the unique battery energy storage solutions coming into the picture, grids have to be thought of as an interactive form of wires, that will allow people-to-people exchange, vehicle-to-grid exchange and grid-to-vehicle exchange. Now, grids should not be merely seen as wires transmitting electrons; these should be seen as wires that empower people to carry out economic exchanges.”

The transmission segment is also witnessing the entry of new players like KSEB Limited and ReNew Power, which have participated in one of the interstate transmission system bids. Further, global investors are lining up to invest in transmission. In May 2019, global private equity major KKR and Singapore’s sovereign wealth fund GIC invested Rs 10.84 billion and Rs 9.8 billion respectively, to collectively acquire 42 per cent of IndiGrid’s outstanding units. KKR has also applied for becoming a sponsor of IndiGrid and plans to acquire an additional 15 per cent of IndiGrid’s total units from Sterlite Power. Following the closure of these transactions, KKR and GIC will together own approximately 57 per cent of IndiGrid’s outstanding units.

Tariff-based competitive bidding (TBCB) was introduced in the transmission segment in 2009. Within a span of 10 years, 46 projects worth Rs 710 billion have been bid out. Of these, 22 projects have been commissioned, four have been cancelled or are under litigation while the rest are under construction. Sterlite Power and Power Grid Corporation of India Limited (Powergrid) have won the highest number of projects (around 13 each). Sterlite Power has the highest number of commissioned projects at around eight. In August 2019, the results for six more transmission projects awarded under TBCB were announced. These projects were secured two each by Sterlite Power, Adani Transmission and Powergrid.

In the intra-state segment, states such as Maharashtra, Madhya Pradesh, Uttar Pradesh, Assam, Bihar and Jharkhand have adopted the TBCB route to award transmission projects. Uttar Pradesh has already awarded projects worth Rs 40 billion and the request for qualification (RfQ) has been released for two more packages. The estimated cost of projects under bidding stands at Rs 18 billion. Meanwhile, Jharkhand, Maharashtra and Madhya Pradesh have released RfQs for awarding transmission projects worth Rs 42 billion, Rs 7.8 billion and Rs 6.3 billion respectively.

The award of transmission projects through the TBCB route has resulted in significant tariff reduction of up to 52 per cent. The average tariff reduction has been in the 30-40 per cent range vis-à-vis projects awarded under the regulated tariff mechanism. Therefore, all projects in the intra-state segment should be awarded through TBCB beyond a threshold as per the Tariff Policy, 2016. However, such threshold has not been determined by transcos in most states. As a result, the majority of the intra-state projects are being executed under the regulated tariff mechanism where tariffs discovered are 40-50 per cent higher than TBCB tariffs.

Issues and concerns for private developers

Currently, the transmission segment has one dominant player, which plays the double role of planning and executing. This player knows the project three years ahead of any of the competitors while the competitors take 90 days to conduct due diligence for that project. In a competitive market, nobody should have a monopoly. Power transmission is the only infrastructure sector in which right of way (RoW) has to be obtained by the developer. In sectors like highways and railways, it is provided by the statutory authorities. As a result, transmission lines are stuck owing to want of RoW, forest permits and stakeholder approvals. In fact, obtaining forest approvals can take up to two years. As per the regulations, forest approval should be granted within 120 days but these timelines are not adhered to.

Another concern is the quality of construction of transmission projects. Low standards of quality not only expose workers to health, safety and environment (HSE) risks, but may also lead to the early failure of transmission towers and lines as has been highlighted in a recent Central Electricity Authority (CEA) report. 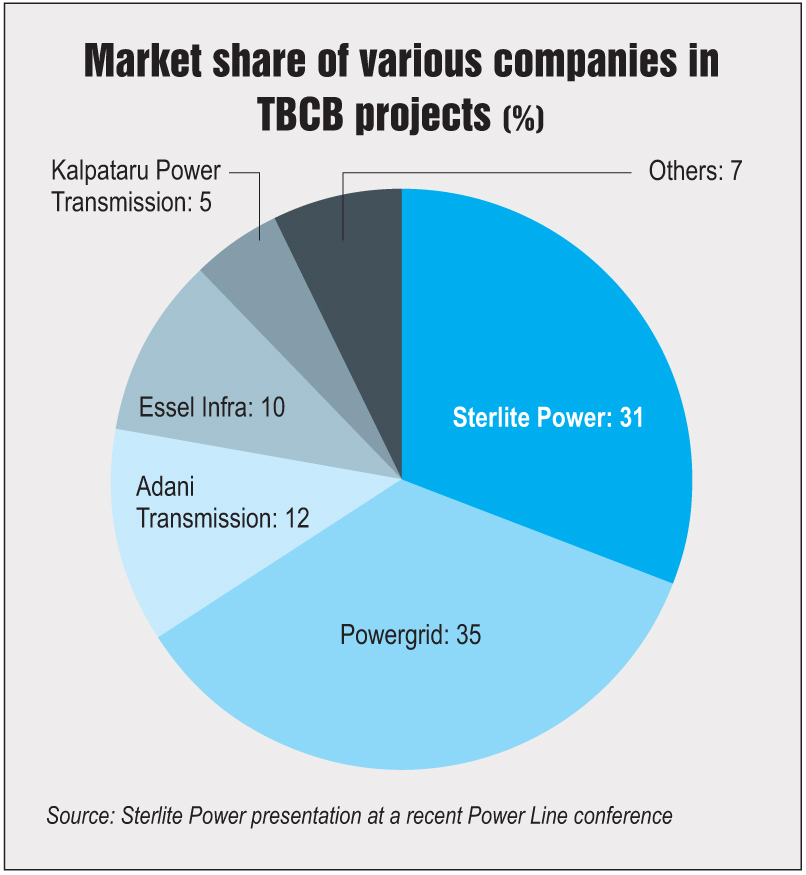 According to private players, a number of policy steps can be taken to encourage greater competition in transmission. Competitive bidding should be the default method of development for transmission and all projects should be awarded through TBCB except for projects of strategic importance. There is a need to separate planning from development and thus do away with the “central transmission utility” (CTU) status of Powergrid. Further, the transmission planning approach needs to be revamped. Currently, transmission networks are being built according to the demand. The planners should build infrastructure that has economic potential for the next 30 years. Also, better coordination is required between transmission planners like the CTU, the CEA and renewable energy nodal agencies like the Ministry of New and Renewable Energy and the Solar Energy Corporation of India.

In addition, there is an asset-liability mismatch as the benefit of the 35-year-long life of transmission assets is not reaching consumers due to the unavailability of long-term financial products. Amendments to the standard bidding documents/TBCB guidelines are required to further encourage early commissioning of transmission projects. The toll-operate-transfer model for road development can be adopted in transmission for monetising assets where debt has been repaid.

There is a need for a project monitoring committee at the MoP level for expediting clearances. Also, increased participation of private developers is required in key committees. Long-pending reforms such as carriage and content separation and implementation of general network access should be expedited. Last, the government should notify clear guidelines for the development of the energy storage market in the country.