In the past few years, there has been a marked slowdown in the ordering activity of boiler, turbine and generator (BTG) equipment. During 2018-19, only one main plant equipment order was finalised. The build-up of stressed assets, the unwillingness of discoms to sign long-term power purchase agreements (PPAs), and the growing competition from renewable energy sources continue to be the pain points for thermal power plants (TPPs), thus adversely impacting the BTG market. That said, the equipment players have been receiving orders for emission control equipment, such as flue gas desulphurisation (FGD) systems, that complies with emission norms. Such orders are awarded to industry heavyweights like Bharat Heavy Electricals Limited (BHEL). There is also a growing interest among gencos in deploying solutions that enhance the flexibility and operational efficiencies of TPPs in this competitive market. Further, utilities are undertaking the digitalisation of BTG equipment for efficient and cost-effective power generation. New project announcements in the thermal power segment have also brought cheer in the BTG space.

The equipment order finalised during 2018-19 was awarded to BHEL by West Bengal Power Development Corporation Limited (WBPDCL) for the 660 MW Sagardighi Extension TPP. It was secured under the international competitive bidding route. Following this, BHEL’s total orders of supercritical sets stand at 56 sets of steam generators (SGs) and 49 sets of turbine generators (TGs). Of these, 17 SGs and 15 TGs had been commissioned till March 31, 2019. In 2018-19, BHEL received orders aggregating Rs 154 billion from the power sector. Meanwhile, the company’s power sector order flow during 2017-18 stood at Rs 333 billion corresponding to 5,040 MW of generation capacity.

Recently, BHEL signed a key MoU with NTPC for setting up an 800 MW technology demonstration plant at the latter’s existing plant at Sipat, Chhattisgarh. The demonstration plant will be based on advanced ultra-supercritical technology, which marks a significant improvement in operational parameters. The new plant is likely to entail a 20 per cent reduction in CO2 emission as compared to conventional subcritical technology. Recently L&T secured a major BTG order from SJVN Thermal Private Limited for setting up a 1,320 MW supercritical power plant in Buxar, Bihar. Under the contract, L&T will supply the steam generator, steam turbine, electrostatic precipitators, an NOx control system, an FGD system and complete balance of plant (BoP) systems, as well as undertake complete civil, structural and architectural works for the project.

After a slump in coal-based investments, new projects have been announced. The Madhya Pradesh government recently announced plans to set up 2,640 MW of coal-based power plants in the state. Reportedly, the state government will invite private companies to bid for setting up two projects of 1,320 MW capacity each. The power from the proposed projects will be sold exclusively to the state. Currently, the proposal is awaiting approval from the cabinet. Reportedly, Coal India Limited has already agreed in principle to supply coal to the projects. Earlier this year, the cabinet granted approval to two thermal projects namely 1,320 MW Khurja STPP in Uttar Pradesh and 1,320 MW Buxar TPP in Bihar. Besides new plants, an upcoming opportunity for BTG players is expected to be the government’s plan of scrapping old plants to set up a new higher capacity supercritical plant.

As per the CEA’s study of old (over 25 years) and inefficient power plants aggregating 33 GW in the central and state sectors, around 7 GW of power plants could be scrapped and replaced with around 18 GW of supercritical units. By replacing the existing plants with new supercritical plants at the site, the generation capacity is expected to double provided that such plants can use the existing infrastructure such as rail linkage, and water and transmission lines. Further, new supercritical plants are expected to offer better plant efficiency due to superior technology and less coal consumption, thus reducing the cost of power generation. Between March 2016 and May 2019, 25-year-old (or older) and inefficient coal/lignite-based thermal power units aggregating 8,470 MW of capacity were retired on account of uneconomic operation. In place of these, new supercritical units will be installed in consultation with various power utilities.

Another major opportunity for BTG players has been in retrofitting. Gencos are retrofitting existing plants with emission control equipment required to meet the stipulated emission targets. To comply with the SOx norms, all existing plants of unit size equal to or more than 500 MW (totalling 102 GW) will have to install FGD systems at a capex of Rs 4.5 million per MW. Further, all under-construction plants of around 53 GW (to be installed from 2017 onwards) have to install both FGD and selective catalytic reduction (SCR) systems for NOx reduction. Overall, a market opportunity of around Rs 800 billion is pegged for retrofitting existing/under-construction plants to meet the new norms. As of June 2019, a total of 95,235 notices inviting tenders have been issued for FGD installation. BHEL secured orders for 17 sets of FGDs and two sets of SCRs during 2018-19, including FGD orders from NTPC for projects totalling around 6.3 GW. 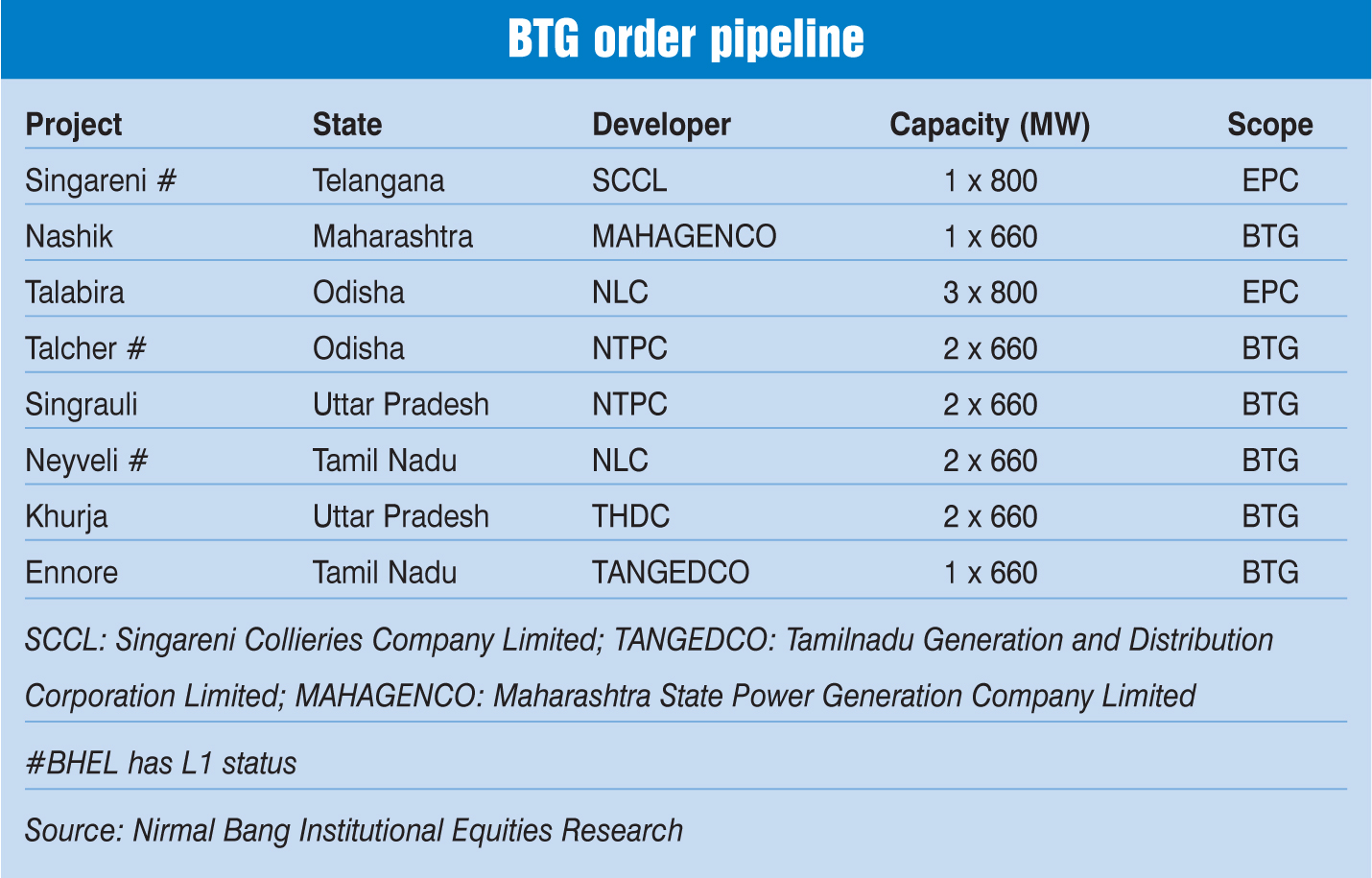 The TPP segment is now more focused on improving its operational efficiency as it works towards supporting the growth of renewables. Given that the frequent cycling of coal-based power plant operations can adversely impact its operational performance, retrofits and design changes are needed to prepare BTG equipment for flexible operations. The aim is to shorten start-up time, optimise combustion processes, reduce minimum loads, automate the start-up sequence, etc. To achieve flexibilisation, gencos will have to invest in advanced frequency controls, online combustion management systems, online coal analysers, condition monitoring systems and reliable flame detectors.

The deployment of digital solutions at the BTG level is also gaining traction for efficient and cost-effective power generation. With digitalisation, power plant operations can be remotely monitored and modified based on performance parameters. Further, remote monitoring and external support can address key human resource and knowledge retention issues. The digitalisation of BTG equipment in a power plant entails the use of sensors, actuators, digital controllers and supervisory computers. Through feedback control loops, plant processes and performance can be monitored and appropriate control actions can be taken to maintain optimum plant conditions despite system disturbances such as changes in coal quality and load demand. Going forward, machine learning, artificial intelligence and cloud computing solutions are also expected to gain traction. 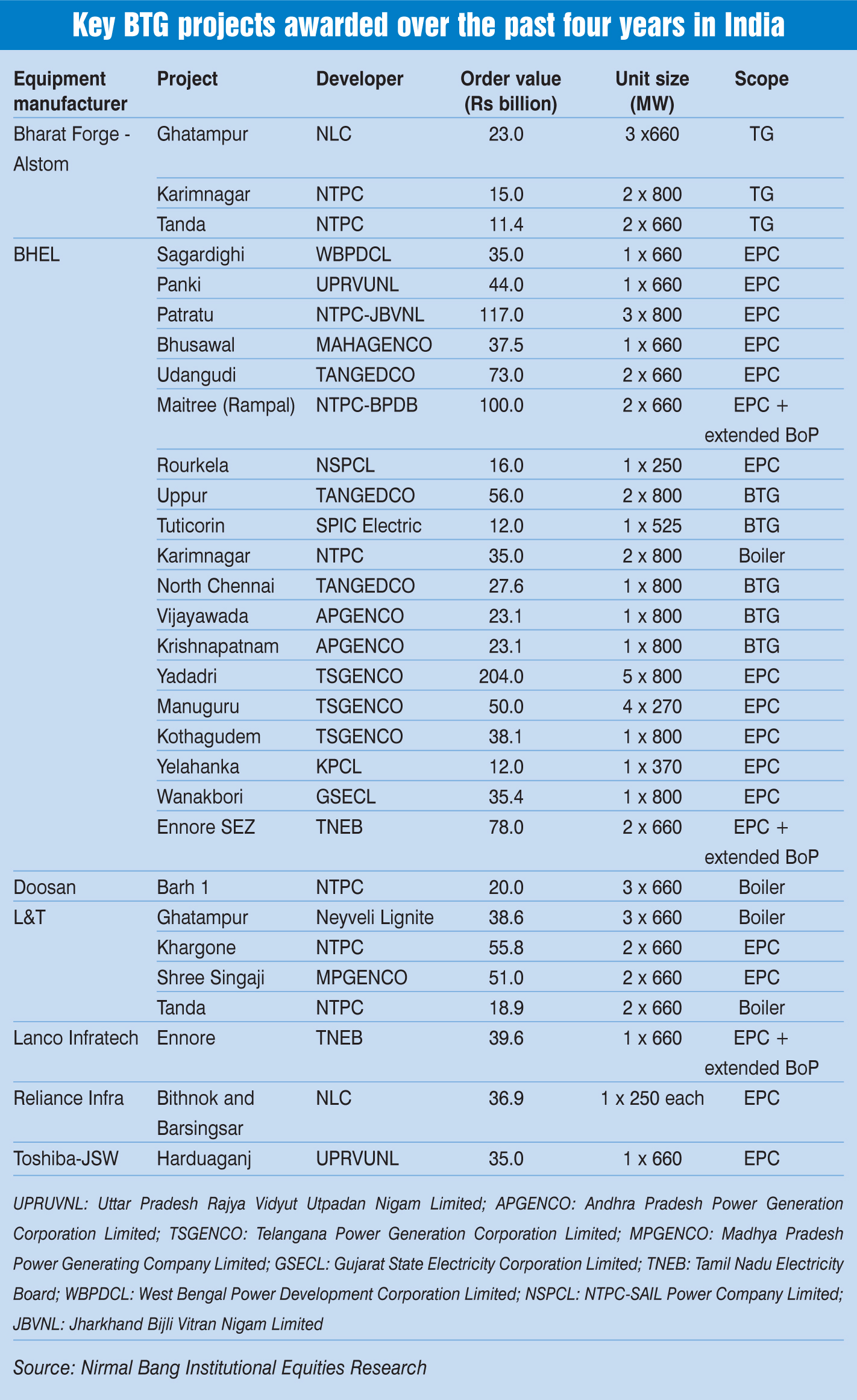 The prospect of BTG order inflow picking up in the near term looks weak, especially in view of the growing renewable capacity and the build-up of stressed assets in the segment. However, some of the positive measures that are expected to de-stress the thermal power segment are SHAKTI, UDAY and signing of medium-term PPAs under the pilot procurement scheme. Apart from this, there is expected to be demand for supercritical BTG equipment for replacing old and inefficient units. The retrofitting of existing BTG equipment in order to ensure optimal operation under flexibilisation is also likely to gain traction.