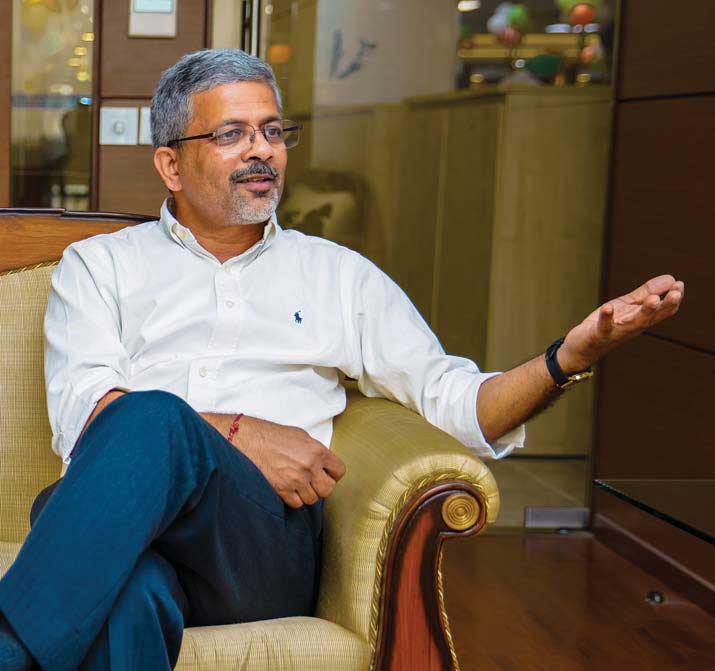 For the past two years, Rajiv Srivastava was based in Singapore as chief operating officer (COO) and head, sales strategy and operations, Hewlett-Packard (HP), for the Asia-Pacific and Japan region. One day, he had to make a difficult decision – take up the next promotion with HP requiring him to move to its US headquarters  or decline the offer because it would mean being a long way away from his father and his motherland.

On one level it was a relatively straightforward decision. Having been filled with remorse for not having spent more time with his mother before she passed away, Srivastava had become extra attentive to family relationships and could not countenance a separation from his elderly father. On another level, it was a huge leap into the unknown to leave HP after 18 hugely satisfying and successful years that shaped the organisation and led it to great heights.

Three months ago, he became the chief executive officer of the Indian Energy Exchange (IEX), an energy trading platform for the physical delivery of electricity and other energy products. The company enables power on demand on a 24×7 basis, price discovery, and counterparty risk management for participants of the electricity market. The exchange provides competitively priced power to over 4,000 consumers in India across segments such as metal, food processing, textiles, cement, ceramic, chemicals, automobiles and information technology (IT).

As luck would have it, or maybe it was Srivastava’s judgement, the choice to take up a new job proved a perfect fit. Yes, he was changing sectors and, yes, he was going from a company with 8,000 employees to one with only 150. But the crucial link between the old and the new job was technology. The new job played to Srivastava’s expertise in business and technology while giving him the opportunity to work in a sector expected to play a crucial role in meeting India’s power needs and fulfilling the aspirations of its people.

“The government’s target of a $5 trillion economy by 2024 will entail a massive growth in power in both thermal and renewable energy. It is obvious that power will be a vital link to economic growth. Moreover, the main drivers of growth in the power sector are going to be increasing demand and smart IT-based solutions,” he says.

Power Line interviewed Srivastava at his office in Jasola, south Delhi. The bookshelves were lined with awards won by the exchange. “That’s only some of them,” he says, as he settles down on the couch.

“What appealed to me about this job was that it is a part of nation-building. Given the huge expansion in power that the Narendra Modi government is planning, the chance to play a role in that transformation is something I am looking forward to,” he adds.

In fact, he says, the exchange, which has seen a significant growth in business and completed a successful IPO in 2017, is at the heart of the power sector. “It’s where everyone goes to sell and buy power. It’s where the prices are the most competitive and accounting is transparent. The exchange strives to ensure highest social welfare through its matching engine, instant financial settlement and the most secure data practices. The use of IT is a key differentiator,” he says.

Still, it couldn’t have been easy to leave the IT sector. It is where Srivastava made a name for himself. He first joined HP in 1997 but left for a while to work at Microsoft for three years, from 2006 to 2010. He was responsible for developing Microsoft’s enterprise business in India and for defining its relationship with policymakers, customers across all verticals and business partners. While at the helm, he increased the company’s revenues from $150 million to $500 million.

He returned to HP in 2010 as India COO and soon took over the leadership of the company as its managing director. During his tenure, HP became the market leader across all categories of products and services. That position and other efforts resulted in HP being voted as the Most Admired Technology Brand in the country by Brand Trust. His pride and sense of loyalty is reflected in the fact that he still uses an HP laptop, or rather three of them.

His last job with HP was in Singapore where he led the portfolio of strategy, sales, services, operations, marketing, emerging/new technologies (including 3D) and business model innovation. While working in this capacity, he managed the company’s over $12 billion business spanning countries like China, Japan, India, Australia, Korea, Indonesia and Singapore.

It was a huge responsibility but Srivastava wears it lightly. His manner and tone speak of a man who is secure in his own skin and doesn’t need to throw his weight around, least of all boast of his achievements. His style is low-key, letting his track record speak for itself.

His own management style at HP was inclusive. “It’s vital to get people on board so that they are inspired by what needs to be done. I like to keep things simple. You need to make sure your messages to the team are lucid and easy to grasp,” he says.

“Alongside that, you need to add an external focus, aligning people towards an aspirational objective that is larger than their job profiles and engaging them meaningfully. The other important aspect of good management is, of course, building a great team and giving it an open and transparent environment to deliver its best,” Srivastava adds.

He is excited at the prospect of the scale of work that the exchange will be handling as the economy grows. And, this is partly because he knows exactly how satisfying the large-scale impact will be. He had first-hand experience of this through one of the world’s largest digital inclusion initiatives that HP was chosen to be a part of.

“One of the most exciting moments at HP was when the Akhilesh Yadav-led government in Uttar Pradesh ordered 15 lakh laptops for college students in 2014. It was amazing to see their transformation and excitement; from children who didn’t even have electricity at home to getting the opportunity to work on laptops. The social and financial inclusion it created, especially for girls, has been unprecedented. I made a point of going out there in the field to study the impact. It was inspirational,” he says.

Ask him about his mentors in the business world and Srivastava says that there have been many corporate leaders he has admired. However, none of them could hold a handle to his mother who, he says, was the biggest influence on his outlook and values.

“My mother defined me as a person. She taught me the virtues of tolerance, patience, and respect for others. She taught me to always look ahead with hope and optimism. She taught me never to dwell on the past. It was always the will and drive to keep moving forward that she emphasised and that approach has stayed with me,” he says.

Predictably, like most of us, he never expressed his appreciation of her personality and influence while she was alive. He thought he had time. But she died at a young age, 19 years ago. “Those are regrets we always have, not having said what was needed to be said to those you love. I never explicitly told her how much I had learnt from her. If I had, I think she would have been pleased. That’s why I am different with my father,” he adds.

Srivastava is a mechanical engineer from BITS Pilani and has a master’s degree in marketing from the Faculty of Management Studies, Delhi. He has about 34 years of experience of working at senior-level positions at companies such as HP India, Microsoft, and Yamaha Motorcycles.

It was the period after Yamaha that he recalls as “perhaps the most defining career moment”. He had just quit his job at Yamaha and had taken up a sales assignment in Muscat, Oman. “Unable to adjust, I returned within 15 days with no job and desperately started looking for one. Another role in the manufacturing sector would have been a logical choice. However, the IT industry appeared attractive in the early 1990s and with absolutely no computer background, I decided to give it a shot. After a few tough rounds of interviews, HCL Infosystems came through, and this really altered the course of my career,” he recalls.

A technology geek, he keeps abreast of the scorching pace of change in the sector. It comes naturally to him. He is passionate about sports and a competitive game of squash is his favourite stress-buster besides a good fiction or history read. When he is not working, he relaxes at home with his wife, a homeopathic doctor, and his father. His son is studying in Australia.

Having set up a robust energy market in India, the IEX is now poised to play a pivotal role in the country’s economic growth. His aspiration is to see the IEX become a truly world-class company. “This has three dimensions. The first is to help the government deliver on its promise of providing 24×7 power to every Indian, which is the biggest driver of creating a $5 trillion economy – our market, technology and processes enable that. The second is to help an extremely happy and contented bunch of employees to continue deriving professional and personal fulfilment through their meaningful work at the IEX. And, the last is to be an innovation leader that provides the highest level of experience to all its external stakeholders,” he says smiling.

It doesn’t get any simpler!