India’s renewable energy sector has come a long way over the past decade with the government and the industry taking several major initiatives. These include the National Solar Mission, the solar parks scheme, solar rooftop and solar pumps programmes, a competitive bidding regime for solar and wind project allocation, a wind-solar hybrid policy, and biofuels and waste-to-energy (WtE) schemes. The industry has adapted well to the competitive bidding regime, which has helped bring down the cost of solar and wind power, which are now significantly cheaper than conventional forms of energy.

Driven by government initiatives,  supported by the industry’s enthusiasm and aided by innovative business models, the Indian renewables sector has emerged as the second most attractive market for renewable energy equipment in the world. The country has already achieved 38 GW of wind and 30 GW of solar installations with another 50 GW of solar and wind power projects being at different stages of bidding and installation. The rooftop solar segment is also looking up. Overall, grid-connected renewable energy capacity has crossed 82 GW as of August 2019. However, the year 2019 has been witnessing a slowdown in terms of capacity added as well as tendered. The sector has been grappling with many challenges. First, wind power purchase agreements (PPAs) are being reviewed in Andhra Pradesh. This is an attempt to renegotiate tariffs that have been determined by the relevant state commissions or have been discovered through competitive bidding under Section 63 of the Indian Electricity Act, 2003, raising many concerns domestically and globally. Second, the sector has moved from a feed-in tariff (FiT) regime to a competitive bidding process. This has led to challenges in terms of execution. For example, the project execution timelines are not linked to the effectiveness of the PPA, which is linked to tariff adoption. Third, though the goods and services tax and safeguard duty reimbursement has been upheld by the Central Electricity Regulatory Commission, the actual disbursement is taking longer than expected, impacting developers’ ability to further bid for projects. There are also challenges related to payment delays by discoms.

As a result, some of the recent tenders launched by the Solar Energy Corporation of India (SECI) received a lukewarm response from the industry. A key issue pointed out by industry players is that every time a new low is discovered in tariffs, the ceiling tariffs for the next tender are pulled down. This practice, they say, does not help the business case for developers, as they cannot match the same tariff under all auctions as the dynamics vary by tender. For instance, following the first solar-wind hybrid auction conducted in 2018, which observed the lowest tariff of Rs 2.67 per kWh, the second tranche of the interstate transmission system (ISTS)-connected solar-wind hybrid auction took place in February 2019. While the tariff cap for this auction was Rs 2.70 per kWh, the lowest tariff that emerged was Rs 2.69 per kWh. The tender was undersubscribed with only 720 MW of capacity finally being bid out compared to the initially tendered capacity of 1,200 MW. In the wind power segment, turbine manufacturers continue to be in poor financial health. Developer and investor interest has dwindled, owing to a continued negative macroeconomic environment, with rising interest rates, depreciating currency, liquidity constraints and credit quality concerns adding to the sector’s woes.

On the positive side, a number of issues have been resolved such as those pertaining to lack of adequate land and transmission infrastructure. The government is leaving no stone unturned to address other issues as well. The Prime Minister’s Office (PMO) has recently intervened to help ease credit supply to renewable energy firms. The PMO has asked NITI Aayog to assess the situation after debt financing for green energy projects dried up with large banks such as the State Bank of India declining to fund projects that have committed to sell power at less than Rs 3 per unit. NITI Aayog is also trying to resolve problems such as delays in payment by discoms that range from 2 months to 15 months and non-allocation of land to wind power projects, as well as transmission and connectivity-related challenges.

With adequate efforts in place, the industry is positive that the temporary lull in the sector will pass soon and the share of renewables will increase significantly in the coming years. Power Line takes a look at the capacity addition trends and recent developments across the renewable energy segments…

The solar energy segment has an installed capacity of about 31 GW as of August 2019, and forms a share of 37 per cent in the overall renewable power base. Large capacity tenders and rapid installations have led solar power to be a dynamic and fast growing segment. Though capacity addition has continued, its pace has slowed down in 2019. Against a target of 7.5 GW of grid-connected and 1 GW of rooftop solar, the installed capacity as of August 2019 stood at 2.1 GW and 376 MW respectively.

The fall in solar tariffs has now been arrested and, in fact, they seem to be on the rise. In July 2018, a 25 per cent safeguard duty was announced on solar cells imported from China and Malaysia for the next two years, to safeguard the interests of domestic manufacturing firms. Tariffs started rising slowly in early 2018 due to uncertainty about the safeguard duties but subsequently started declining after the issue was resolved. SECI issued a tender under solar ISTS Tranche V in June 2019. The 1.2 GW tender only received bids for 600 MW, with the final capacity of 480 MW being auctioned. This was a poor follow-up to the Tranche IV tender, which received an enthusiastic response.

The wind segment is still struggling to cope with the shift in regime from FiTs to competitive bidding. India managed to add only 1.1 GW of new wind capacity in 2019 up to August 2019. While the situation seems somewhat better this year as compared to 2018, which saw a total capacity addition of 1,480.97 MW, the wind segment is lagging behind its target of 60 GW by 2022. With only 36.7 GW installed as of August 2019, it is still a long way from achieving the target.

Tariffs in the wind power segment (which are much lower than FiTs) have reduced the earlier double-digit returns for developers to sub-10 per cent levels. However, reduced tariffs, along with the drop in capacity additions, have thrown off the existing business models of developers and manufacturers alike, and have increased the woes of wind turbine manufacturers and developers. In addition, the threat of state utilities reneging on PPAs, in the context of states like Andhra Pradesh backtracking on signed PPAs, also increases the uncertainty and loss of confidence in the market. Past and present tenders have already started facing headwinds due to transmission and land constraints with projects of thousands of megawatts remaining stranded. SECI’s Tranche VI tender (February 2019) for 1,200 MW of wind power witnessed an enthusiastic response from developers. However, the trend seems to have reversed since then, as the Tranche VII tender for 1,200 MW (April 2019) was heavily undersubscribed due to land availability issues. The Tranche VIII tender for a capacity of 1,800 MW was also undersubscribed, with only 440 MW being the final auctioned capacity (August 2019). 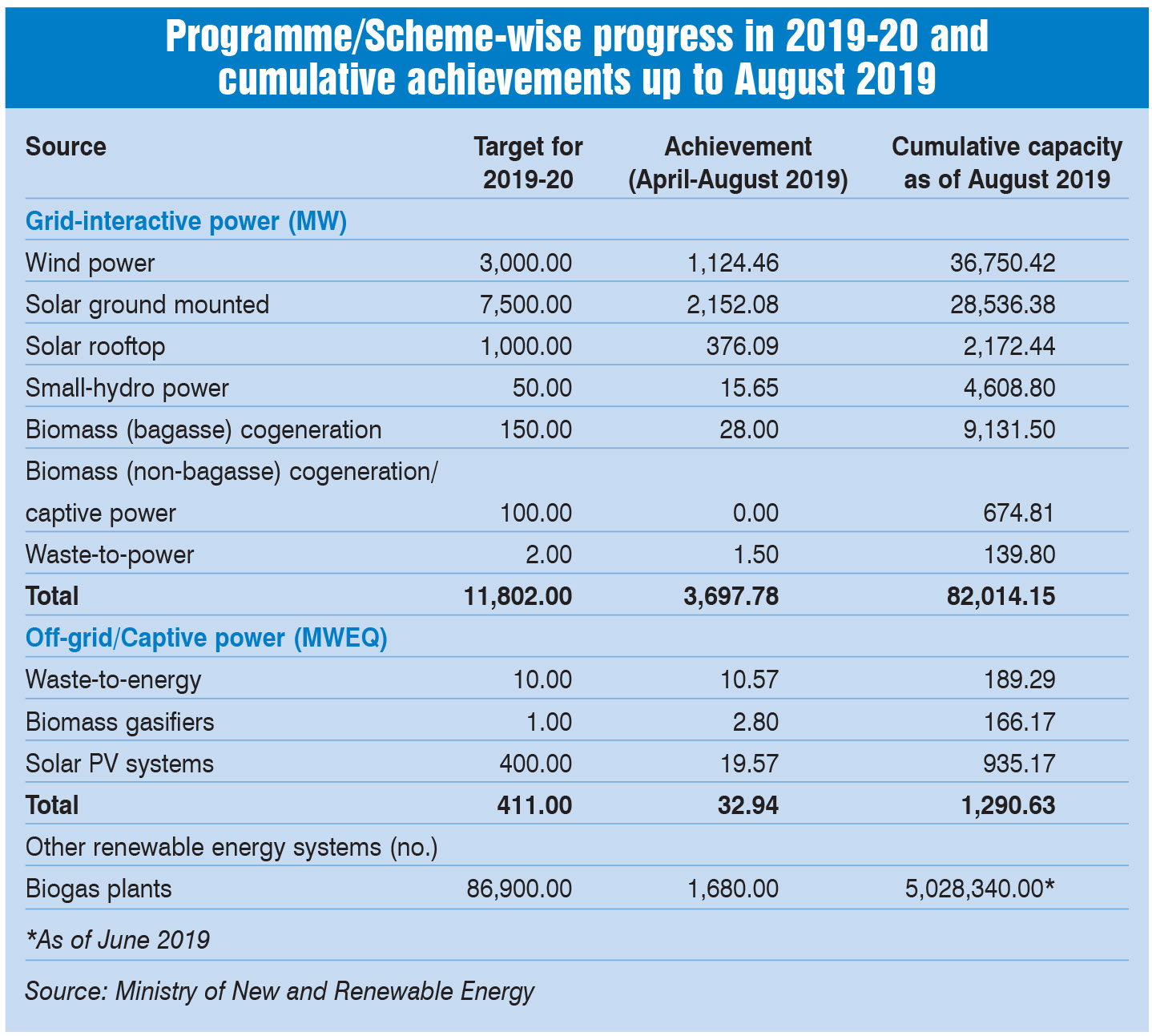 As of August 2019, the country’s total installed bioenergy capacity remained small without much change. The total capacity amounted to 10 GW (including WtE capacity), compared to the total available potential of 25 GW. The bioenergy segment has long been overshadowed by a preference for solar and wind segments. Besides this, issues related to collecting, storing and transporting biomass and waste have kept developers and investors at bay.

The small-hydro segment too continues its lukewarm journey with only 15.65 MW of new capacity being added between April and August 2019, so that the total capacity stands at 4.6 GW as of July 2019. The segment has been suffering from policy inaction and lack of investments for quite a while. This, combined with environmental challenges and lower returns, is making new developers reluctant to foray into the segment.

The renewable energy market is highly competitive and dynamic. New areas of opportunity like solar-wind hybrids, floatovoltaics and energy storage are emerging and are helping higher generation levels while also propelling the sector forward to meet the 175 GW target by 2022. There are constant innovations with new and competitive products, and services entering the market. However, in order to maintain this growth momentum and accelerate renewable capacity addition, it is important to implement long-term, uniform and comprehensive policies.